Green algae take over a beach in the bay of Saint-Brieuc (2011).
RGA/REA
Share
Share
An environmental disaster in Brittany, blooms of green algae provide evidence of a rapidly-growing occurrence caused by pollution: eutrophication. A scientific report published on 19 September 2017 sheds light on the causes, risks and ways of containing a phenomenon that takes place when aquatic environments are saturated with nutrients.

While the hole in the ozone layer and climate change are two illustrations of the way in which humans can drastically alter the functioning of the Earth system, eutrophication of ecosystems is yet another. Although not so well known to the general public, this event testifies to the large-scale impact of human activities on the environment.

Eutrophication, derived from the Greek eu (well) and trophein (feed), is characterized by a series of imbalances associated with an overproduction of organic matter, caused by the discharge of large amounts of nitrate and phosphate into watercourses and aquifers. "This phenomenon can be thought of as an attack of indigestion in an ecosystem that has accumulated so many nutrients that it can no longer break them down on its own," explains Gilles Pinay, director of the Observatoire des Sciences de l’Univers de Rennes (OSUR),1 and rapporteur of a collective scientific expertise on eutrophication2 for the CNRS. Commissioned by the French Ministry of Agriculture and Food and the Ministry for Ecological and Inclusive Transition, the report, drawn up by 45 researchers, was published on 19 September 2017 by the CNRS, INRA,3 IFREMER4 and IRSTEA.5

Although intermittent algal blooms, the most visible effects of this accidental fertilization, have been described since ancient times, eutrophication only really took on a worldwide dimension towards the end of the nineteenth century, with the proliferation of large cities and their accompanying industrial estates. Directly related to the discharge of wastewater from these vast urban areas into rivers, such pollution was effectively reduced when cities decided to install sewage plants. "The first eutrophication-related crisis in modern times dates back to the 1970s, when iconic natural environments such as the Great Lakes of North America or Lake Geneva saw their oxygen concentrations fall dramatically," explains Pinay, a CNRS biogeochemist. The reduction and subsequent ban of phosphates in detergents in turn successfully curbed this initial eutrophication. 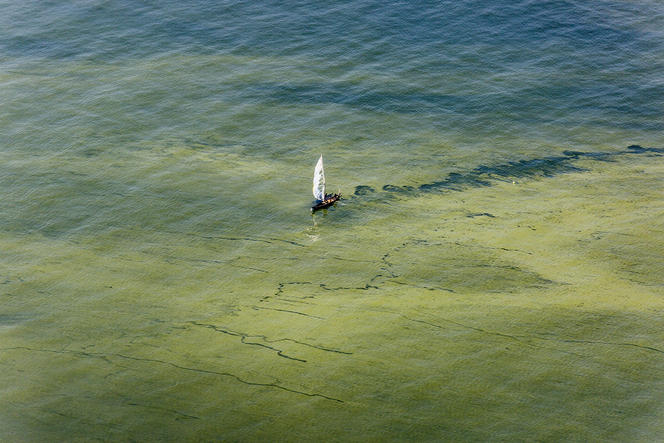 Some lakes in East Africa, which had until now been spared, are increasingly feeling the effects of eutrophication. Above, Lake Victoria, Africa's largest lake, has seen its ecosystem degraded due to the proliferation of green algae. 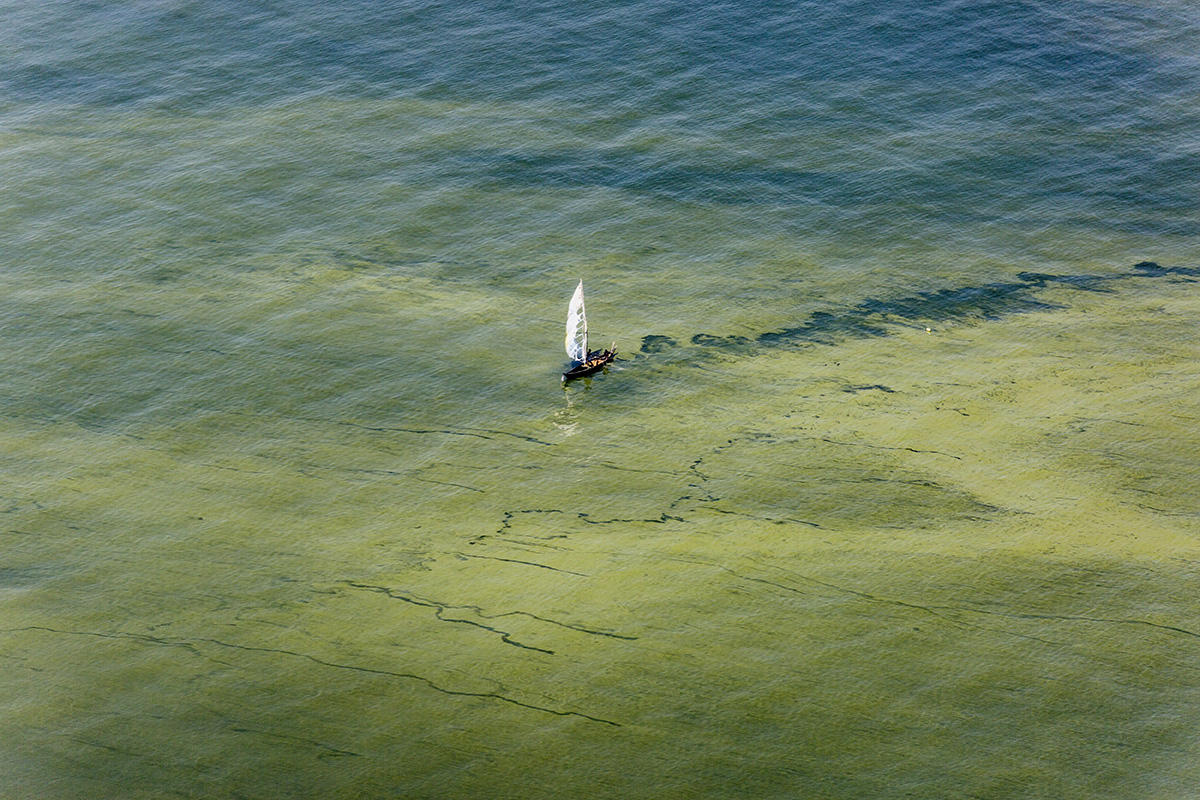 However, the respite was short-lived. Since the beginning of the 21st century, a more insidious upsurge of eutrophication has been spreading across the world. Symptoms of this more diffuse fertilization include occasionally toxic plant blooms, biodiversity loss, and falls in oxygen concentrations that can cause massive die-offs of aquatic organisms. The marine environment appears particularly impacted by this new episode. In the last forty years or so, the number and impact of hypoxic (low-oxygen) and anoxic (without oxygen) zones around the world has tripled. A survey carried out in 2010 estimated their number at around 500, covering a total area of about half that of France.

Eutrophication has not only become more frequent and widespread but, its effects have also been observed to have spread to hitherto unscathed geographical areas such as some of East Africa's great lakes and Mediterranean lagoons. In France, green algal blooms in some of Brittany's bays have been a recurring problem since the 1970-80s.

"Although for over 30 years both scientists who specialize in coastal areas and environmental organizations have been raising awareness on the overabundance of nitrogen and phosphorus in natural environments, we have had to wait until the mid-2000s and the media's focus on health risks linked to green tides (Editor's note: the resulting hydrogen sulphide emissions have already caused several deaths) for the public to become increasingly aware of the problem of eutrophication," points out Alix Levain, a researcher in ethnology and sociology at the Laboratoire Interdisciplinaire Sciences Innovations Sociétés (LISIS).6

Because of the important use of chemical fertilizers on crops and the large amounts of effluent from intensive breeding, the current model of intensive agriculture is frequently blamed whenever the issue of eutrophication is raised.  However, recent episodes of green algal blooms in coastal areas as well as the proliferation of toxic microalgae that affect some low-altitude lakes in summer go back a long way, as Pinay explains. "We are faced with the legacy of around a hundred years’ worth of nitrogen and phosphorus release into the environment, which aquatic ecosystems have not yet been able to clean up." Limiting manure spreading on outdoor crops, reducing soil erosion by planting winter crops, and encouraging farming practices that use less chemical fertilizer are some of the measures taken at the European level over the past few years to reduce the impact of eutrophication on aquatic ecosystems. Yet despite these efforts, the benefits for natural environments have unfortunately remained limited. "Taking these various measures into account, nitrogen release into the environment was expected to fall drastically from 2012," Pinay says. "However, we now know that its residence times in certain environments such as small watercourses were considerably underestimated by scientific studies." Long-term experimental research in which Pinay was involved has since shown that soils do not take three or four years to assimilate nitrogen from agricultural fertilizers, as previously believed, but rather several decades.7 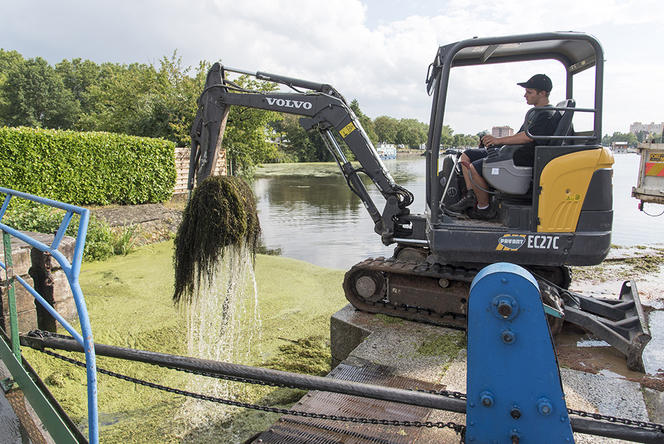 Green algae started proliferating in the Loire river, blocking the lock of the port of Roanne. The excessive amounts of nitrate in the water were caused by intensive agriculture. 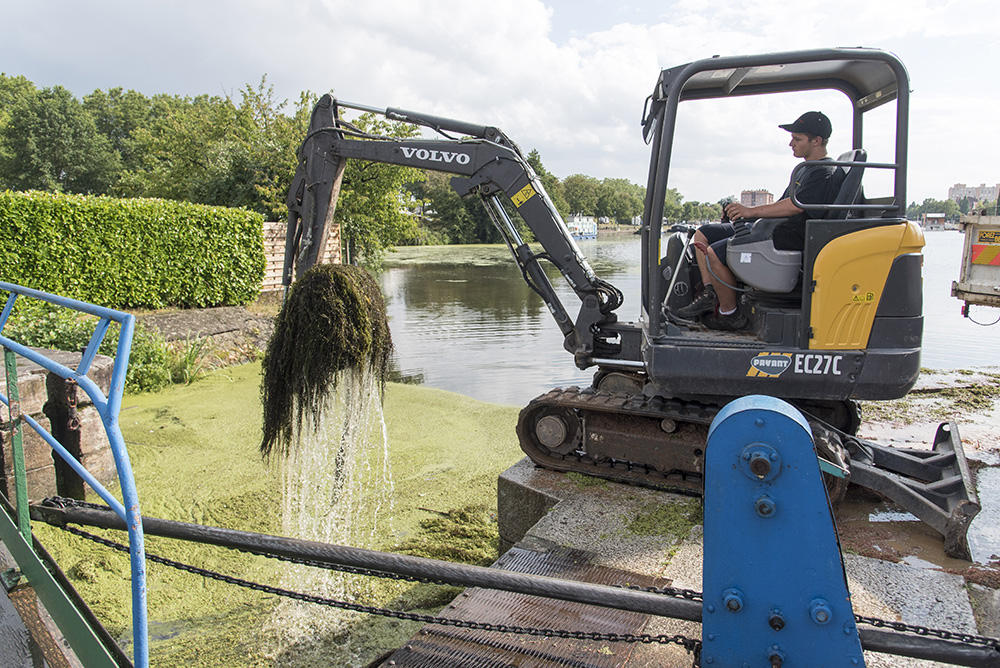 Some ecosystems are more sensitive than others

Moreover, sensitivity to eutrophication varies considerably between ecosystems. Streams, for instance, are less affected since organic matter does not have enough time to break down, unlike the lakes downstream, where the residence time of water flowing into them can be very long.

The nature of soils and their use, as well as the geographical and geological structure of the drainage basins feeding rivers, are other factors that also play a role, while the presence of powerful eddies off some coastal regions causes nutrients to concentrate there.

In Brittany, this explains why algal blooms always occur in the same bays year after year. Since natural environments that appear similar at first sight may react differently to excess input of nutrients, a case-by-case analysis often needs to be carried out to determine the concentrations above which an ecosystem is highly likely to be affected by eutrophication. "European regulations that define maximum nitrate and phosphorus concentrations in drinking water are not relevant in the case of eutrophication, since some biotopes can be negatively affected at concentrations that are ten times lower than those laid down by regulatory thresholds," Pinay points out.

In a context of global warming, successfully identifying the aquatic ecosystems that are most sensitive to growing inputs of nutrients is more than ever key to fighting eutrophication. Ever warmer temperatures should boost the production of plant biomass while reducing dissolved oxygen concentrations in water, which is likely to magnify current impacts of eutrophication on aquatic environments. In addition, increasingly heavy rainfall over the next few decades is likely to lead to more flooding and hence more erosion, which will raise the amount of nitrogen- and phosphorus-rich sediments flowing into these same ecosystems. Recent modeling of nutrient flows conducted worldwide shows that the quantities of sediment reaching the oceans nearly doubled during the twentieth century, from 34 to 64 million tonnes of nitrogen and from 5 to 9 million tonnes of phosphorus per annum. It is important to realize that agriculture now accounts for more than half these flows of nutrients. "Succeeding in accurately identifying the regions of the world where it will be possible to continue farming without harming the environment and, conversely, those that need to be protected, will certainly be a decisive factor in the fight against eutrophication over the coming years," Pinay concludes.

Opinion
Dragons, mammoths and giant wolves: what do the animals in “Game...
Environment