Radial MRI of the lungs showing an accumulation of mucus (in white), a common symptom of cystic fibrosis.
CAVALLINI JAMES / BSIP
Share
Share
In France, cystic fibrosis affects some 150 newborns each year. While there have already been significant advances in how symptoms are treated, research is now targeting the cause of this fatal disorder. CNRS News reviews the latest and promising therapeutic strategies.

With 7,000 sufferers in France,1 cystic fibrosis is the most frequent of the rare diseases. This progressive genetic disorder often manifests itself in early childhood, or even at birth. Its potentially serious symptoms include respiratory (pulmonary infection and inflammation) and digestive problems (gradual destruction of the pancreas). Since the standardization of postpartum screening in 2002, one case is detected among newborns in France every two to three days. Specifically, the disease is caused by the mutation of a gene located on chromosome 7 that encodes for the cystic fibrosis transmembrane conductance regulator (CFTR) protein. The condition, also known as mucoviscidosis, is expressed in children for whom both versions of the gene, the mother’s and the father’s, are mutated—or what is called autosomal recessive transmission.

“In the past 30 years, the situation of sufferers has improved,” comments. Virginie Colomb-Jung, a physician who heads the medical department of the patients support association "Vaincre la Mucoviscidose." “The proof is that during this period the proportion of patients who survive beyond the age of 18 has risen from 20% to 54%.” There are two main reasons for this evolution: the development of highly effective symptomatic treatments, like respiratory physiotherapy, which helps patients evacuate the secretions that burden the lungs, and the prescription of digestive enzymes to compensate for pancreatic deficiency; as well as systematic treatment upon diagnosis in France by the specialists of the CRCM2 network. Today, young people and adults suffering from cystic fibrosis can complete their education, pursue a career and in some cases even start a family. 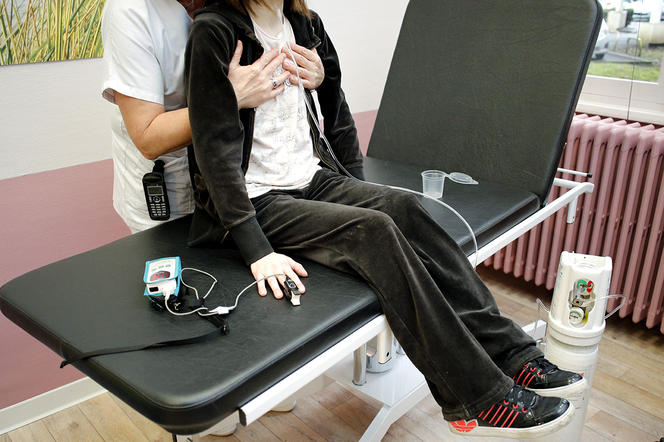 Respiratory physiotherapy session at the cystic fibrosis center of the Albert-Calmette Hospital in Lille (France). 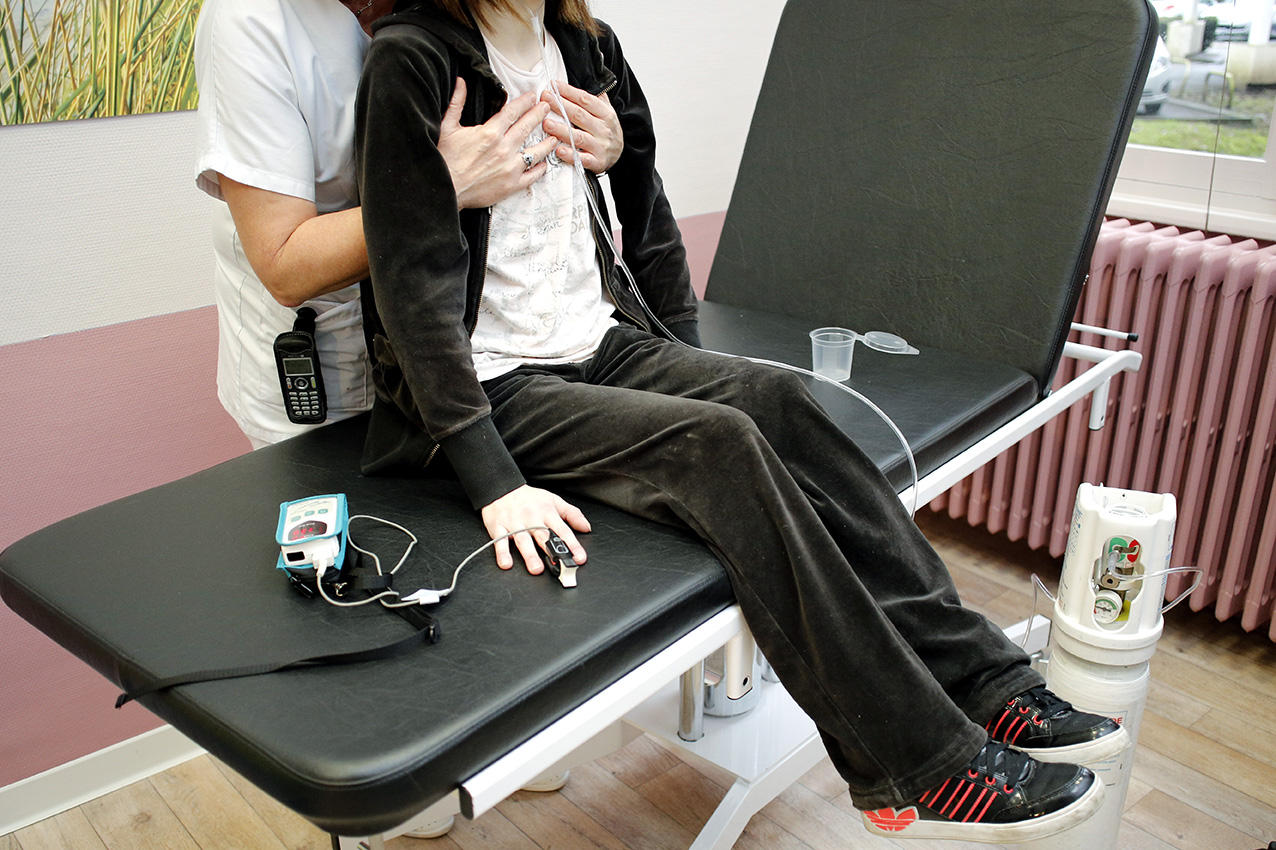 Respiratory physiotherapy session at the cystic fibrosis center of the Albert-Calmette Hospital in Lille (France).
ASTIER/BSIP
ASTIER/BSIP
Share
Share
Cistic fibrosis sufferers require daily doses of no fewer than 30 to 40 tablets or capsules.

However, as Colomb-Jung cautions, “this improvement in the patients’ life expectancy and quality must not obscure the reality of the disease. It still requires several hours of care every day, including at least one session of physiotherapy and aerosol antibiotics, as well as daily doses of no fewer than 30 to 40 tablets or capsules.” Hence the hopes raised by emerging therapeutic strategies, i.e. therapies that no longer target the symptoms but the root cause: the mutated gene and the resulting altered protein.

Found in the membrane of the epithelial cells that form the mucosae of the lungs, pancreas and sweat glands, the CFTR protein is an ion channel. Its role is to transport anions, like chloride and bicarbonate, and regulate their exchanges between the interior and exterior of the cells. Pascal Barbry, director of the Institute of Molecular and Cellular Pharmacology (IPMC)3 in Sophia-Antipolis (southeastern France), is a specialist in this protein family and, with his team, a pioneer in the study of the CFTR protein. “Since the sequencing of the CFTR gene in 1989, more than 2,000 mutations have been identified, with highly variable frequencies,” he notes. “This partly explains the complexity of the disease and the diversity of its manifestations: a variety of mutations that have different impacts on the protein.” The team’s most important findings include the demonstration of a residual activity of the protein derived from the most frequent mutation, delta F508 (80% of cases), which was previously thought to be completely “dead.” This discovery is already steering pharmacological research towards curative—as opposed to purely symptomatic—treatments.

Of the 2,000-some mutations, nearly 300 are now well characterized. Some of them simply block the production of the protein, while others produce a defective protein, resulting in either a malformation (folding defect) that prevents its proper insertion into the membrane, or the inactivation of the mechanism that opens and closes the ion channel. Thus, one of the therapeutic possibilities is to identify or create “chaperone” molecules that can guide the protein into the membrane (corrective effect) or activate it (potentiation effect). 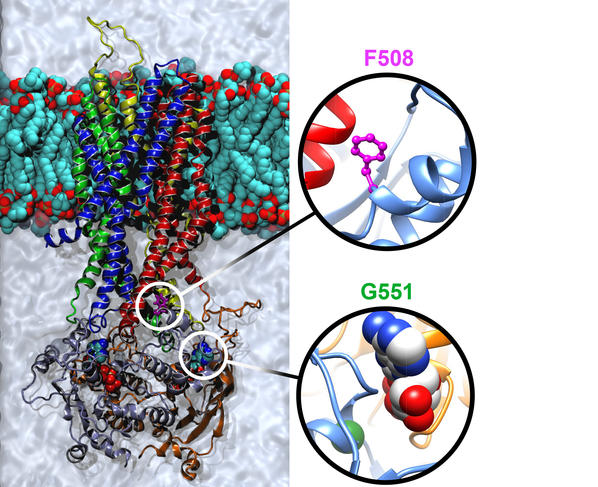 Simplified model of the 3D structure of the CFTR protein, showing locations for phenylalanine 508 (F508, pink) and glycine 551 (G551, green). 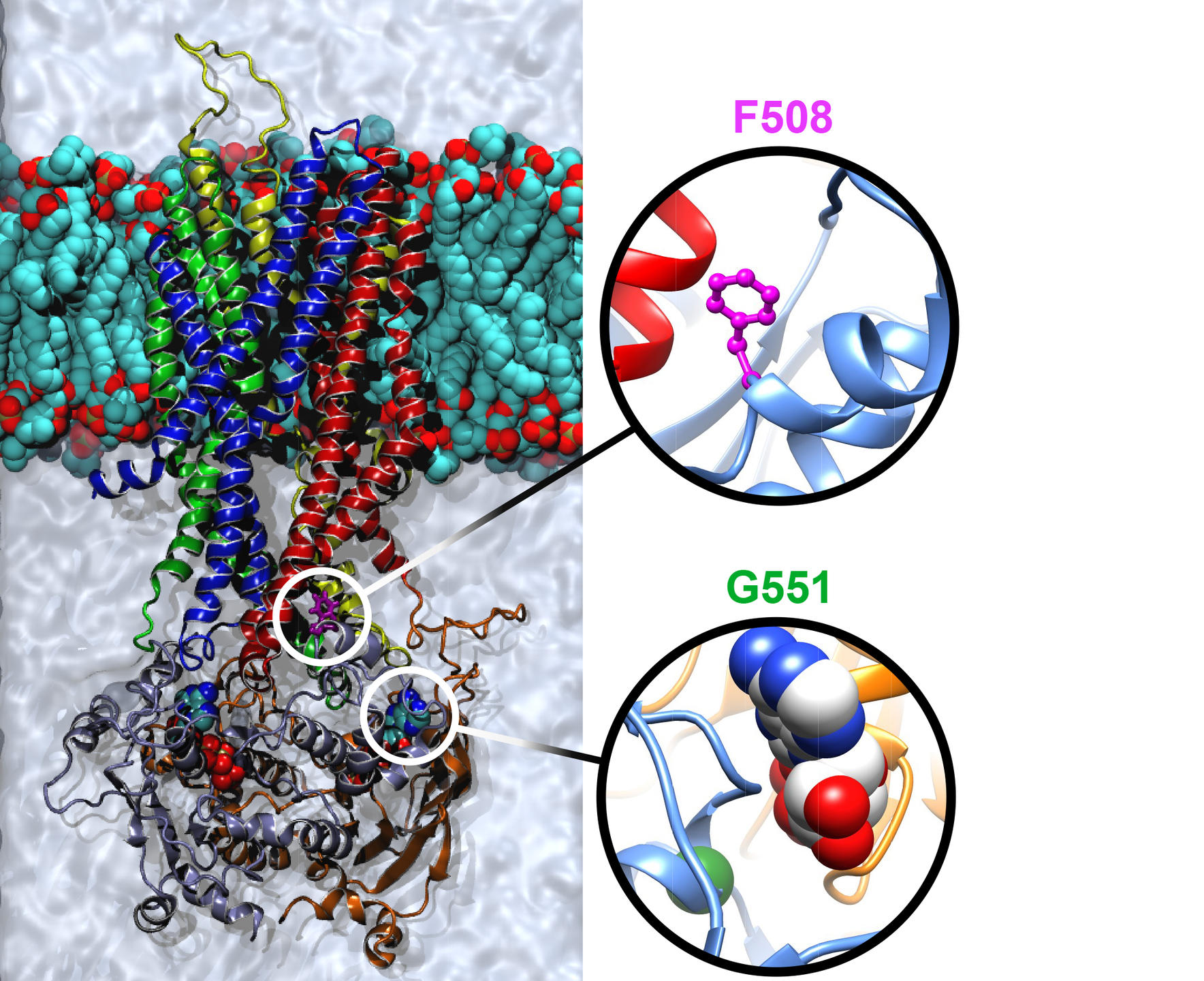 High-throughput screening4 has identified several molecules of interest, starting with Kalydeco® (ivacaftor), which reactivates the channel. Prescribed in France since 2014, this drug significantly improves the symptoms and notably increases respiratory capacity. However, ivacaftor is only effective for certain mutations, such as the G551D mutation. “Indeed, this molecule can only treat 6% of patients, but its discovery has revolutionized the therapeutic approach to cystic fibrosis,” Barbry observes. “For the first time, we can act directly on the cause of the disease.”

We are getting closer to being able to offer patients effective molecules for the specific mutation that they carry.

Other drugs undergoing clinical testing include Orkambi® (phase 3),5 which corrects the two defects associated with the delta F508 mutation (the most frequent cause of cystic fibrosis), namely poor membrane insertion and reduced ion channel activity. Orkambi® combines ivacaftor to activate the channel, and lumacaftor to improve protein folding. Results are encouraging, although its effectiveness varies from patient to patient.

These breakthroughs pave the way for personalized therapies for cystic fibrosis, which could be available in the medium term. “We are getting closer to being able to offer patients effective molecules for the specific mutation that they carry,” reports Isabelle Sermet, a professor and senior researcher at the Institut Necker Enfants Malades.6 “In addition, we should be able for each mutation to test various molecules on tissue samples taken from the patient (like nasal cell smears) in order to identify the one that will best restore the function of the CFTR protein.” 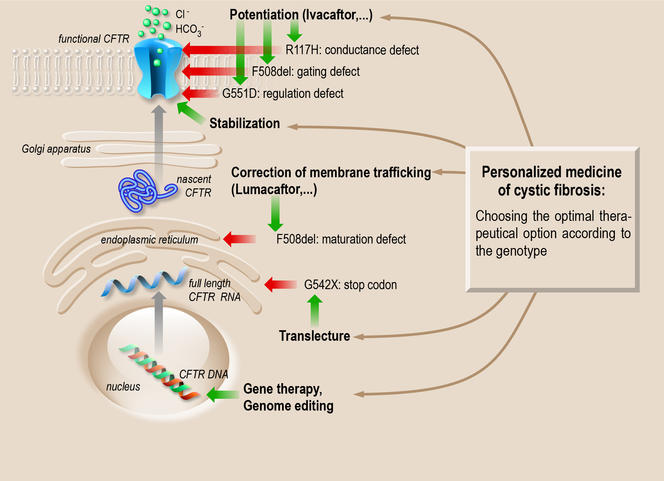 The possible modulators of the CFTR protein, depending on the type of mutation. 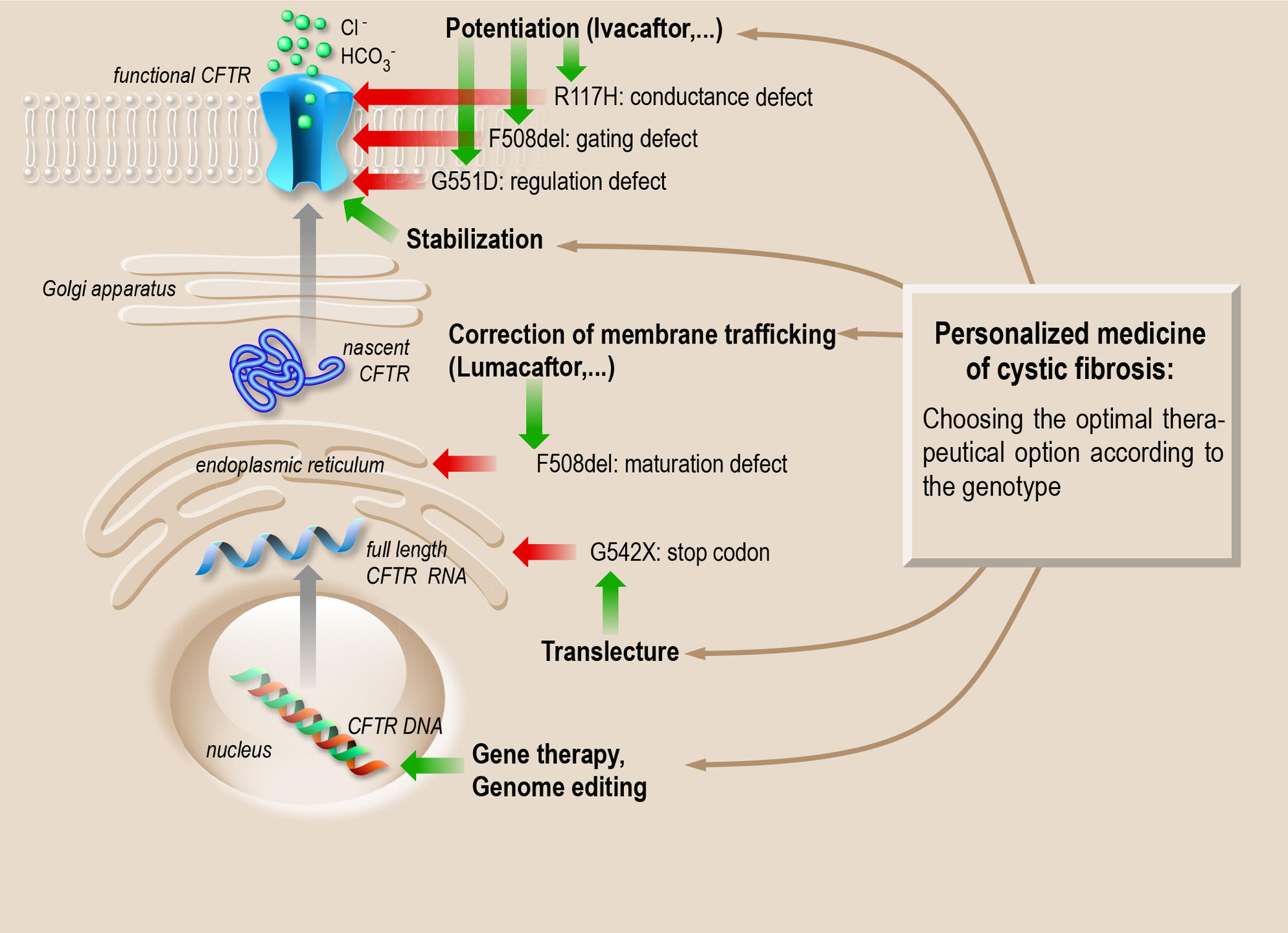 The possible modulators of the CFTR protein, depending on the type of mutation.
F. AGUILA
F. AGUILA
Share
Share

High-throughput screening has made it possible to isolate several promising molecules. Yet this “blind” technique gives no indication of their mode of action, hence the advantage of another approach—currently in the development stage—consisting in decrypting the mechanisms of action of modulators (correctors or potentiators), based on the structure of the normal CFTR protein and its mutated forms. This is the ambition of the team headed by Isabelle Callebaut, a CNRS senior researcher at the Paris-based IMPMC,7 who specializes in analyzing protein sequences to create models of their structural and functional characteristics. “In 2015, we completed a model simulating the three-dimensional structure of the CFTR protein that indicates the position of its 1,480 amino acids,” the scientist recounts. “It is proving to be the most useful and accurate model, both in terms of the protein's dynamics and the data obtained through experimentation.” It enables researchers to study the impact of various genetic mutations on the structure of CFTR, its folding mechanisms and various conformations (opening/closing of the channel), and seek to design specific therapeutic strategies for each mutation and each protein defect. Work is already underway to create modulators targeting the delta F508 mutation, which will contribute to the development of high-precision medication adapted to each patient’s profile.

In the early 2000s, gene therapy emerged as one of the main leads to follow in the study of cystic fibrosis. The basic principle involves using a viral vector to introduce a normal version of the gene into the diseased pulmonary cells to compensate for the genetic deficiency. Despite the initial expectations, trials have proved disappointing, including the most recent, an original study using synthetic vectors conducted by a British consortium.

Attention has now turned to the lentiviruses, which could turn out to be effective vectors. However, as Barbry points out, “specifically targeting respiratory cells, correcting the genome of cells that don’t divide properly and penetrating the mucus barrier are major stumbling blocks in the quest for viable gene therapy approaches. These obstacles will need to be overcome to allow the development of techniques using the recently discovered CRISPR enzymes, which can make precise cuts in DNA sequences.”

Another key challenge facing researchers is to target stop codons, the markers normally located at the end of the gene, signaling the termination of the protein production process. Certain mutations of the CFTR gene cause these stop codons to appear in the middle of the gene, which aborts protein synthesis. Molecules that aim to correct these anomalies are currently being tested in clinical trials. This research has considerable potential both from a fundamental and therapeutic perspective. “Although it is still a long way away, the successful completion of this strategy would make it possible to treat not only cystic fibrosis sufferers who carry this type of mutation, but all those affected by genetic disorders involving stop codons, including myopathies,” Sermet points out. 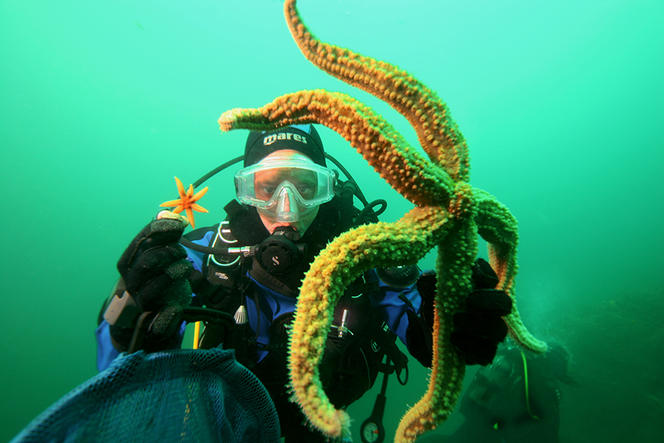 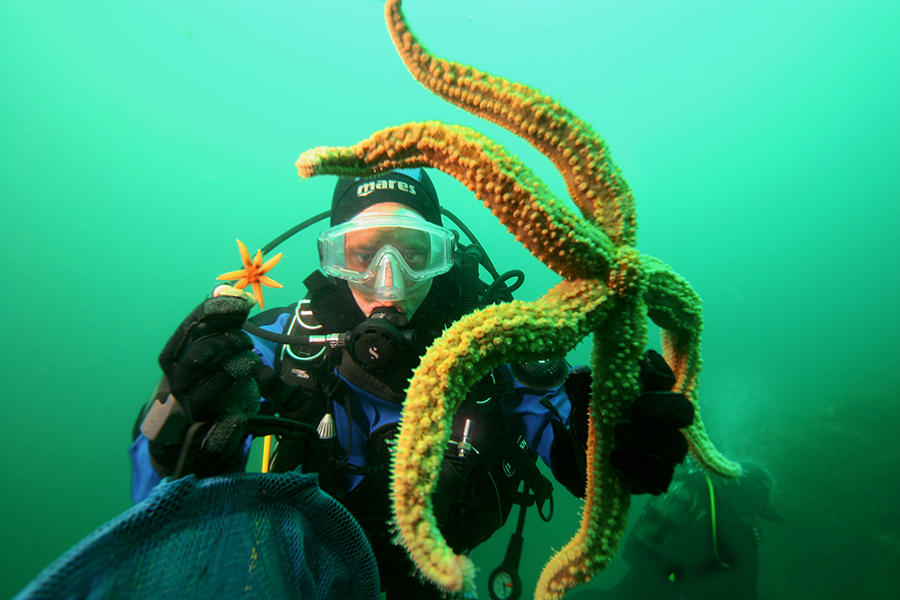 In parallel with these efforts to fight the root cause of cystic fibrosis, research continues on symptomatic treatments, targeting in particular the pulmonary infections and inflammations that are still the main factor for patient mortality. New antibiotic therapies are being investigated—including by many CNRS laboratories—to combat bacterial strains like Pseudomonas aeruginosa, which are especially difficult to eradicate among cystic fibrosis patients. Other work focuses on inflammation, like that conducted in Roscoff (Brittany, France) by CNRS researcher Laurent Meijer and his team,8 who have discovered a molecule called roscovitine, derived from starfish eggs, that is now undergoing phase II clinical trials.

With the support of patients’ associations, and Vaincre la Mucoviscidose in particular, research in cystic fibrosis is thriving. From fundamental work to the most advanced clinical studies, therapeutic strategies are emerging that point the way toward increasingly personalized treatments, covering the broad spectrum of symptoms associated with this tragic disease. Researchers and patients have good reason for optimism.

Stéphanie Belaud has been a scientific writer for more than ten years. She specializes in biology, medicine and the environment.