“We’re getting out.” This seemingly trivial sentence, uttered on 1st June, 2017 by the US President Donald Trump, sent a shock wave around the world. These words actually meant that the United States was withdrawing from the Paris Climate Agreement, a historic text signed in the French capital at the end of 2015 by 194 other countries, with a view to keeping the increase in global average temperature “well below 2°C” above pre-industrial levels. Hence the immediate decision taken by French President Emmanuel Macron to invite “any scientists, engineers, entrepreneurs, or committed citizens” who felt let down or were adversely affected by the U-turn of the occupant of the White House, to come (or return) to France to work “on concrete solutions for the climate”.

“The climate emergency poses unique challenges for science,” says CNRS Chairman and CEO Antoine Petit, on the eve of the first conference of the Make Our Planet Great Again (MOPGA)1 programme, to be be held on 1st October at the Musée du Quai Branly in Paris, in the presence of the French and German Research Ministers. “Adaptation and/or mitigation solutions must be based on the best available scientific data. To generate this knowledge and apply it, President Macron called for the implementation of an international call for proposals giving researchers who have resided outside of France for at least two years the opportunity to carry out innovative work in French laboratories on the issue of global change, including climate change,” Antoine Petit explains. 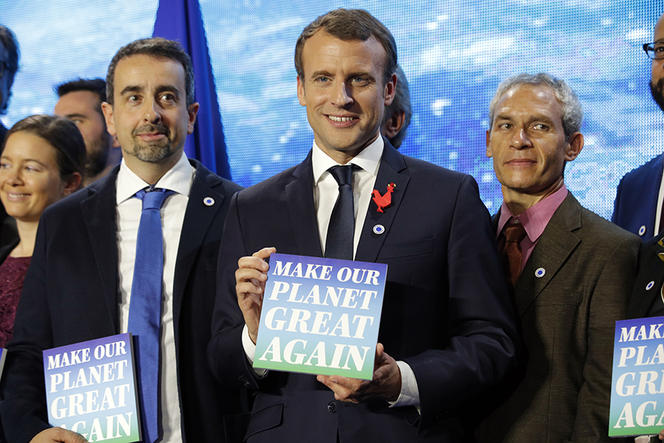 French President Emmanuel Macron holds a sign with the slogan 'Make our planet great again' as he attends the 'Tech for Planet' event at the 'Station F' start-up campus ahead of the One Planet Summit in Paris on December 11, 2017. 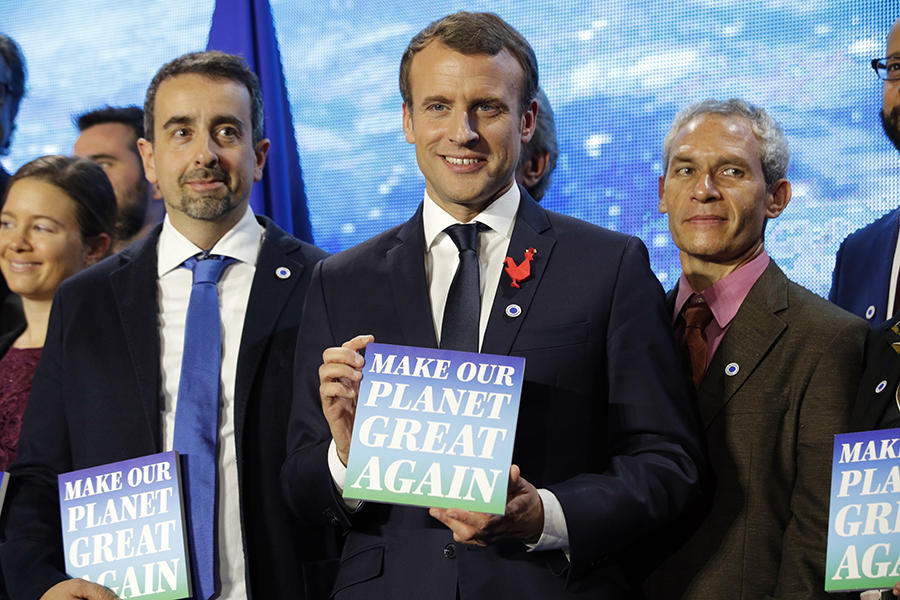 The MOPGA programme, whose budget amounts to €60 million, is focused on understanding the physical, chemical, biological and other mechanisms that govern the Earth system, as well as sustainable development and energy transition. Half of this sum is provided by the General Secretariat for Investment (SGPI) and managed by the French National Research Agency (ANR), while the other half is supplied by the host institutions.

“Not every euro contributed by the latter is necessarily in the form of cash,” Antoine Petit points out. “The contribution can perfectly well be made ‘in kind’, that is, by making an appropriate assessment of the human and technological environment (possibility of using cutting-edge instruments, access to platforms, etc.) in which the successful candidate works. And it is important to underline that, in addition to the involvement of the ANR and the laboratories, regional partners also play a significant role, which reflects the motivation of all the stakeholders concerned by the project.”

The procedure adopted for the selection of candidates, whether junior (i.e. those who obtained their PhD less than 12 years ago) or senior (over 12 years ago), was carried out in two stages, in both 2017 and 2018.

In the first phase, led by the CNRS on behalf of all the French research organisations, applicants were assessed on the quality of their CVs. In the second, supervised by the ANR, an international jury evaluated the projects pre-selected by the CNRS and developed by the researchers working together with the teams of the labs they hoped to join. The jury was chaired by Corinne Le Quéré, Professor of Climate Change Science at the University of East Anglia (UK), and head of the French High Council for Climate Change (HCC) since November 2018. Made up of nine or ten members, depending on the year, the interdisciplinary jury included French and Finnish climatologists, a chemist and a biologist from the US, a Swiss economist and a Japanese sustainability specialist.

Sharing out the funding

“The projects we examined in the first year (2017) were more focused on Earth system sciences, with relatively few submissions dealing with the humanities and social sciences or issues related to sustainable development and energy transition. However, this trend was reversed in 2018,” Corinne Le Quéré notes. “Overall, the submissions were of a very high standard. The challenge was how to share out the funding between very good senior projects and highly promising junior ones. Additionally, some proposals that were interesting but required further improvement, were reworked following our recommendations, resubmitted to the jury and eventually validated, which is very gratifying.”

Figures testify to the fact that France's call for tenders has attracted the interest of the scientific community well beyond its borders. When the programme was launched on the MOPGA website, managed by the public agency Campus France, more than 11,000 clicks and contact requests from students and researchers from around 100 countries, companies, NGOs, etc. were recorded. Over 400 researchers expressed interest in long-term stays. A total of 340 applications were submitted, of which 43 were selected by the jury. “By supporting 21 of the 43 projects selected, the CNRS is by far the research organisation with the greatest involvement in the MOPGA programme,” says Antoine Petit, who also points out that 40 of the 43 projects are being conducted in CNRS joint research units, in other words together with other institutions.

The attractiveness of the CNRS

The role played by the flagship of French research is hardly surprising, given that “the quality of its work on global change, including climate change, is internationally recognised,” adds Stéphanie Thiébault, director of the CNRS Institute of Ecology and Environment. In fact, the CNRS ranks third in the “Earth and environmental sciences” category in the 2019 Index of the journal Nature, just behind the Chinese Academy of Sciences and the Helmholtz Association of German Research Centres. “Our laboratories are highly attractive, which is why a large number of successful candidates wanted to join them,” Thiébault comments. 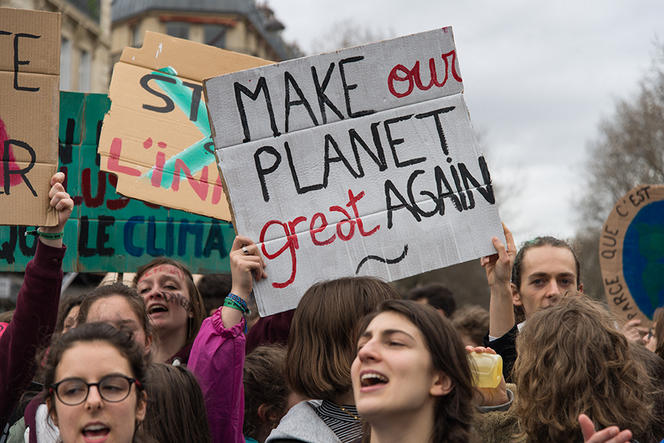 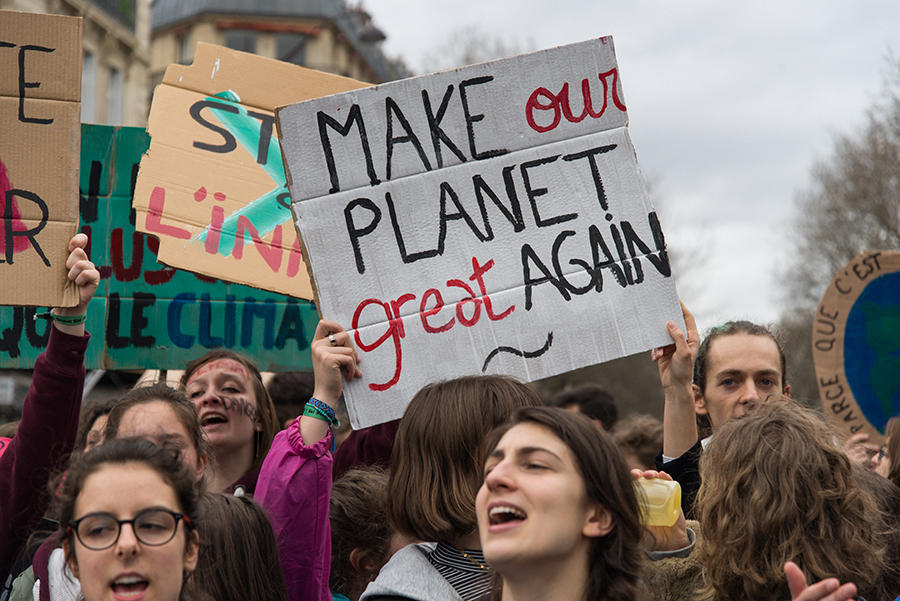 So have laureates found it difficult to adapt to French habits and customs, and especially to the intricacies of the country’s administration? “To our knowledge, all participating institutions have done everything they can to help the successful applicants prepare frequently complex administrative documents,” Antoine Petit says. “In our case, two advisers took them through administrative procedures: one at the CNRS office in Washington (US), and the other at the Mission for Transversal and Interdisciplinary Initiatives in Paris.”

Most importantly, the MOPGA project is based on a win-win rationale. The outstanding scientists selected for the quality of their CVs and the originality of their proposals enjoy a stimulating environment in the internationally renowned institutions that host them, while these organisations in turn derive scientific added value from their presence.

“For instance, the US chemist Christopher Cantrell, who in March 2018 joined the Inter-University Laboratory of Atmospheric Systems (LISA)2 for five years with the aim of studying the large-scale climate and health impact of pollution, brings with him not only his ideas, experience, methodology, and so on, but also his connections with other international laboratories and his funding networks. This makes it a long-term contribution,” explains Nicolas Arnaud, director of the CNRS National Institute for Earth Sciences and Astronomy (INSU). The arrival of a researcher such as Venkatramani Balaji (a Canadian scientist of Indian origin who was previously at Princeton University), whose work is bringing about a revolution in climate modelling methods, “opens up new windows for our research and enhances our visibility. Salary is far from being the principal motivation for MOPGA applicants. What convinced them was the programme’s relevance and the excellence of the labs. Moreover, some have obviously seized this opportunity to return to work in France”, adds Elsa Cortijo, director of the LSCE,3 which, in addition to Balaji, is hosting three successful candidates from the US and one from Japan.

In charge of the scientific coordination of the project at the national level, the CNRS is also involved in it at the European scale with its colleagues from the German Academic Exchange Service (DAAD), Germany having joined the initiative at the French-German summit in July 2017 and set up a similar programme (same selection procedures, same subjects).

“The budget allocated to this programme, dubbed Make Our Planet Great Again-German Research Initiative (MOPGA-GRI), amounts to €15 million for the period 2017-2022,” explains DAAD’s Anke Stahl. “We are funding a total of 13 research projects, seven of which are led by researchers who until now have lived and worked in the US, such as biologist Christina Richards and physicist Yutsung Tsai. The principal organisations involved are the Universities of Augsburg and Leipzig, the Institute for Advanced Sustainability Studies, Potsdam, the Karlsruhe Institute of Technology, the Leibniz Institute for Research on Evolution and Biodiversity, Berlin, and the Helmholtz Centre Geesthacht. The joint running of the initiative should give rise to fruitful exchanges between the teams concerned on both sides of the Rhine and, more generally, strengthen French-German scientific cooperation.” To this end, a mid-term conference will be held in Strasbourg (France), and a closing conference in Berlin (Germany) in 2022.

See author's bio
Will the Androids from the Alien Saga Exist in 2093?Previous
A Moving Walkway?Next