Home / Articles / Closing in on Planet 9

Closing in on Planet 9

Home / Articles / Closing in on Planet 9

Closing in on Planet 9

Artist rendering of the possible 9th planet of the Solar System. It would take 10,000 to 20,000 years for this gas giant located far beyond the orbit of Neptune to revolve around the Sun.
R. HURT (IPAC)/CALTECH
Share
Share
Less than a month after US astronomers postulated the existence of a ninth planet in the Solar System, a French team managed to halve the possible search area. One of the researchers responsible for this feat recounts the experience.

One month after the announcement by two Caltech (US) researchers that there may be a new planet in our Solar System, you were able to publish a refined estimation of its possible positions. This time lapse is remarkable, considering the peer review process for scientific publications. Were you already tracking a planet before this announcement?
Jacques Laskar, CNRS senior researcher at the IMCCE1: Yes, astronomers suspected the existence of an additional “super-Earth”-type planet as early as 2014, when the object 2012 VP113 was discovered in the Kuiper belt. The atypical orbit of this dwarf planet, as well as that of Sedna, required new hypotheses. With my colleague Agnès Fienga from the GéoAzur laboratory,2 we had already started looking at how the INPOP planetary ephemerides could infer the presence of an additional object in the Solar System. So when on January 20th, Konstantin Batygin and Mike Brown published3 news of a possible ninth planet weighing 10 Earth masses in The Astronomical Journal, we decided to step up our research. We focused on the orbit suggested by the researchers to obtain a quick result that would help us determine whether the existence of such a planet was possible or not. We submitted our results as early as January 31st to Astronomy & Astrophysics, which accepted our article on February 16.4 Not only were we able to confirm that the hypothesis put forward by our US colleagues was plausible, but we also succeeded in halving the number of possible locations of such a planet.

What new observations did you use to “refine” Batygin and Brown’s results?
J. L.: Our method is actually entirely different from that used by the Caltech researchers and it is based on a different set of observational data. As I said, our work relied on a model called INPOP, which was developed as early as 2003. This model integrates nearly 150,000 observations of planets and asteroids of the Solar System. It enables us to establish ephemerides that can predict, at any given moment, the position of the various bodies of the Solar System, taking into account their mutual gravitational interactions. These ephemerides are so accurate that they can determine the exact distance between Saturn and the Earth at any time, with a margin of error of a mere 75 meters! To test the possibility that a ninth planet of approximately 10 Earth masses might lurk in the Solar System, we entered it into the dynamic INPOP model, using the parameters, and possible configurations suggested by Batygin and Brown. We then recalculated the ephemerides obtained for Saturn in each of these configurations. By comparing these ephemerides to data collected by the Cassini spacecraft since 2004 on the actual position of Saturn, we were able to determine that some positions of Planet 9 considerably increased the margin of error of the INPOP model, while others reduced it. Since INPOP has already proved its reliability, we inferred that planet 9 could not be located in zones that would significantly increase the model’s current margin of error. Besides, it is more likely that this planet would be located where its presence reduces this margin. 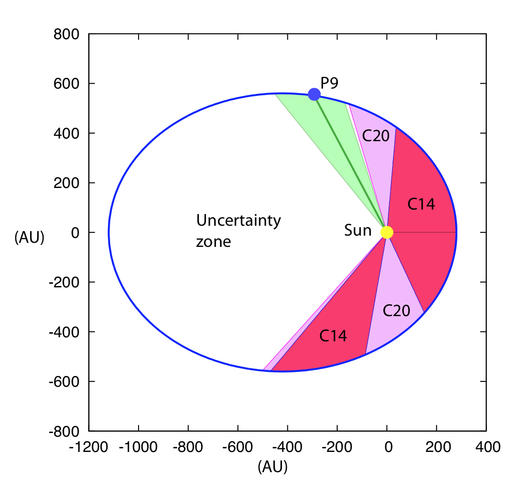 Orbit for a potential 9th planet. Analysis of the Cassini spacecraft data makes it possible to define "exclusion" zones (red) where the perturbations created by the planet are incompatible with observations, and a "probable" zone (green) where the introduction of the planet improves the model that predicts Earth-Saturn distances and is more in line with observational data from Cassini. 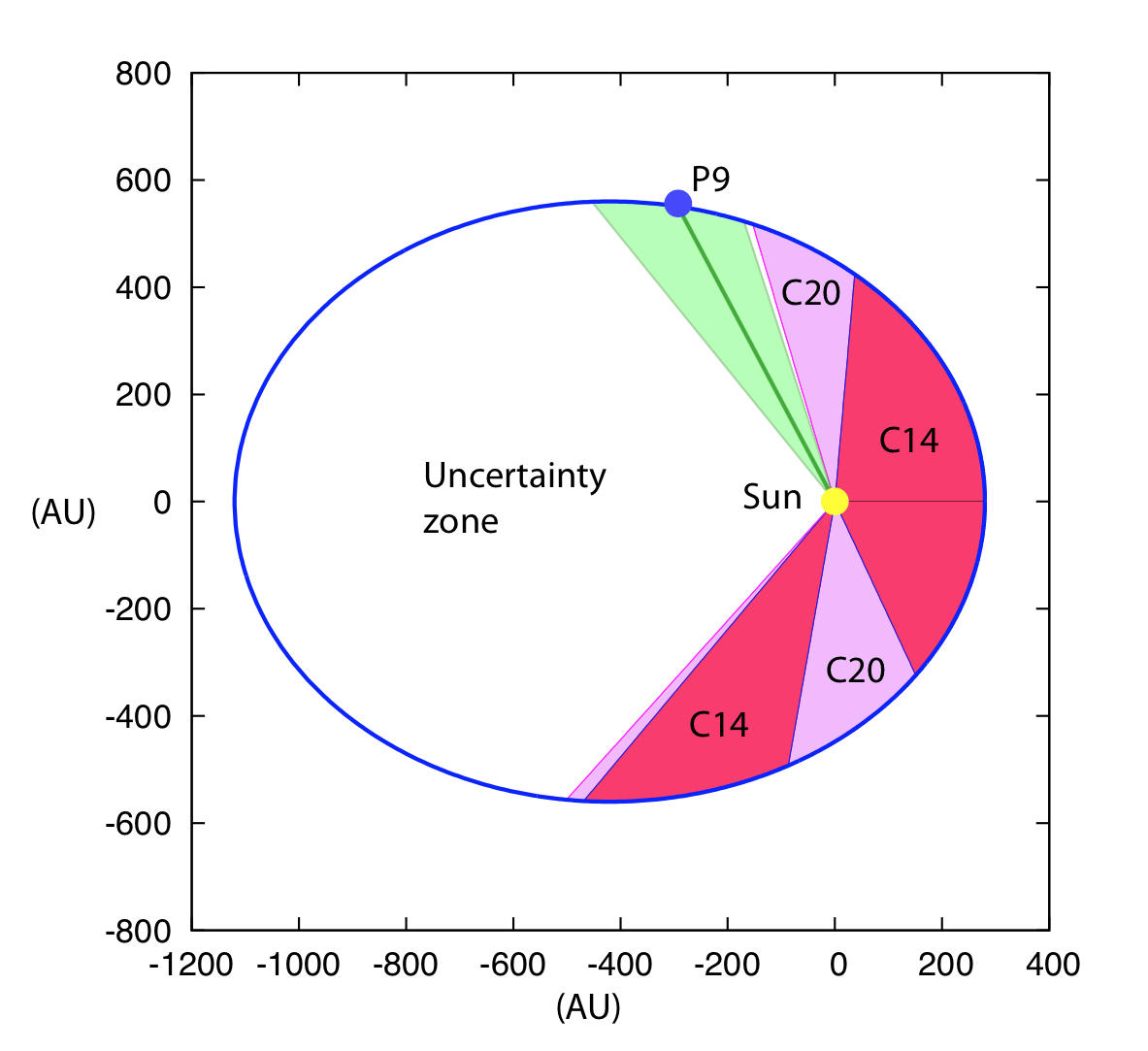 Orbit for a potential 9th planet. Analysis of the Cassini spacecraft data makes it possible to define "exclusion" zones (red) where the perturbations created by the planet are incompatible with observations, and a "probable" zone (green) where the introduction of the planet improves the model that predicts Earth-Saturn distances and is more in line with observational data from Cassini.
J. LASKAR/GEOAZUR/IMCCE/OBSPM
J. LASKAR/GEOAZUR/IMCCE/OBSPM
Share
Share

Your results delimit a zone where the presence of this planet is more likely, and exclude others. In relation to the initial hypotheses of Batygin and Brown, by how much have you reduced the search area for its possible location?
J. L.: Our most reliable result concerns exclusion zones, where the presence of Planet 9 is impossible because the gap between the actual positions of Saturn and those calculated by INPOP would be too wide. The research of Batygin and Brown gave a few constraints on the inclination of the orbit of Planet 9, in contrast to the ecliptic planeFermerThe ecliptic is the plane on which the eight known planets in the Solar System orbit, from Mercury to Neptune, as well as the asteroids of the main belt—but which is not the case of dwarf planets in the Kuiper Belt like Pluto and Sedna, but none in terms of its position on this orbit in relation to the other planets. This means that you would have had to look in all directions over 360° to have a chance to observe it. Yet our calculations made it possible to reduce this angle of possible directions down to 180°. And within this scope, we are able to outline an area covering some 20° where the presence of the planet is most probable. We should also keep in mind that by widening the dataset from the Cassini spacecraft, we could further downsize the possible search area: for example, by extending its mission—scheduled to end in 2017—to 2020, the observation window could be cut from 180° to 120°. We also hope to refine our estimations with soon-to-be-available data from the Juno probe on the position of Jupiter, although its size and relative distance from planet 9 make it less sensitive to gravitational perturbations.

According to you, where should amateur astronomers be pointing their telescopes to discover this new planet?
J. L.: It seems that with a magnitude estimated at 23-24, amateur astronomers have no chance of observing planet 9. This discovery, if it ever takes place, will only be possible using large telescopes with a wide field, such as the Megacam camera at the CFH in Hawaii, for example.

Article
The James Webb Space Telescope is set to explore the early...
Astronomy

Article
Next Stop: Uranus and Neptune