Artist's impression showing the ExoMars 2016 Trace Gas Orbiter (TGO), with its thrusters firing, beginning its entry into Mars orbit on 19 October 2016.
ESA/ATG MEDIALAB
Share
Share
With its probe scheduled to land on Mars on October 19th, ExoMars 2016 is the first of two European missions to investigate the Red Planet’s atmosphere and find evidence of past life under its surface. Franck Montmessin, CNRS researcher and lead scientist on the mission’s key instruments, explains the high stakes of this historical campaign.

What exactly is the objective of ExoMars, Europe's1 newest mission to the Red Planet?
Franck Montmessin:2 ExoMars represents the second major phase of the European Space Agency’s (ESA) exploration of Mars. It follows Mars Express, which has now been in orbit around the planet since 2003 and proved a great scientific success. This new two-part mission will put the ESA firmly on the surface of Mars. The first part—ExoMars 2016—was launched on March 14, 2016, from Baikonur (Kazakhstan) to reach the Red Planet this October. It consists of the Trace Gas Orbiter (TGO) and a probe (called Schiaparelli) that will act as a test-run to demonstrate the ESA’s capabilities of landing on the planet. Provided there are no delays, the second leg of the project—ExoMars 2018—is scheduled for launch two years later. This will be the main part of the mission, whose objective will be to land a rover capable of drilling 2 meters in the ground in the search for complex—and possibly organic—matter, that may have been preserved from the surface’s hostile environment. Current Rovers like NASA’s Curiosity, for example, can only drill up to 5 centimeters. 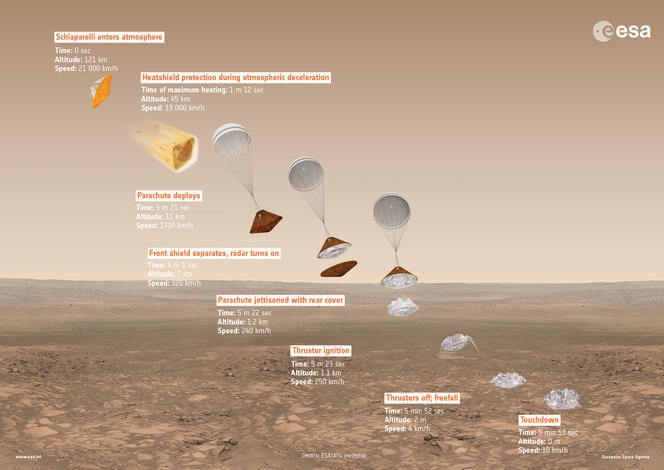 Overview of Schiaparelli's entry, descent and landing sequence on Mars, with approximate time, altitude and speed of key events indicated. 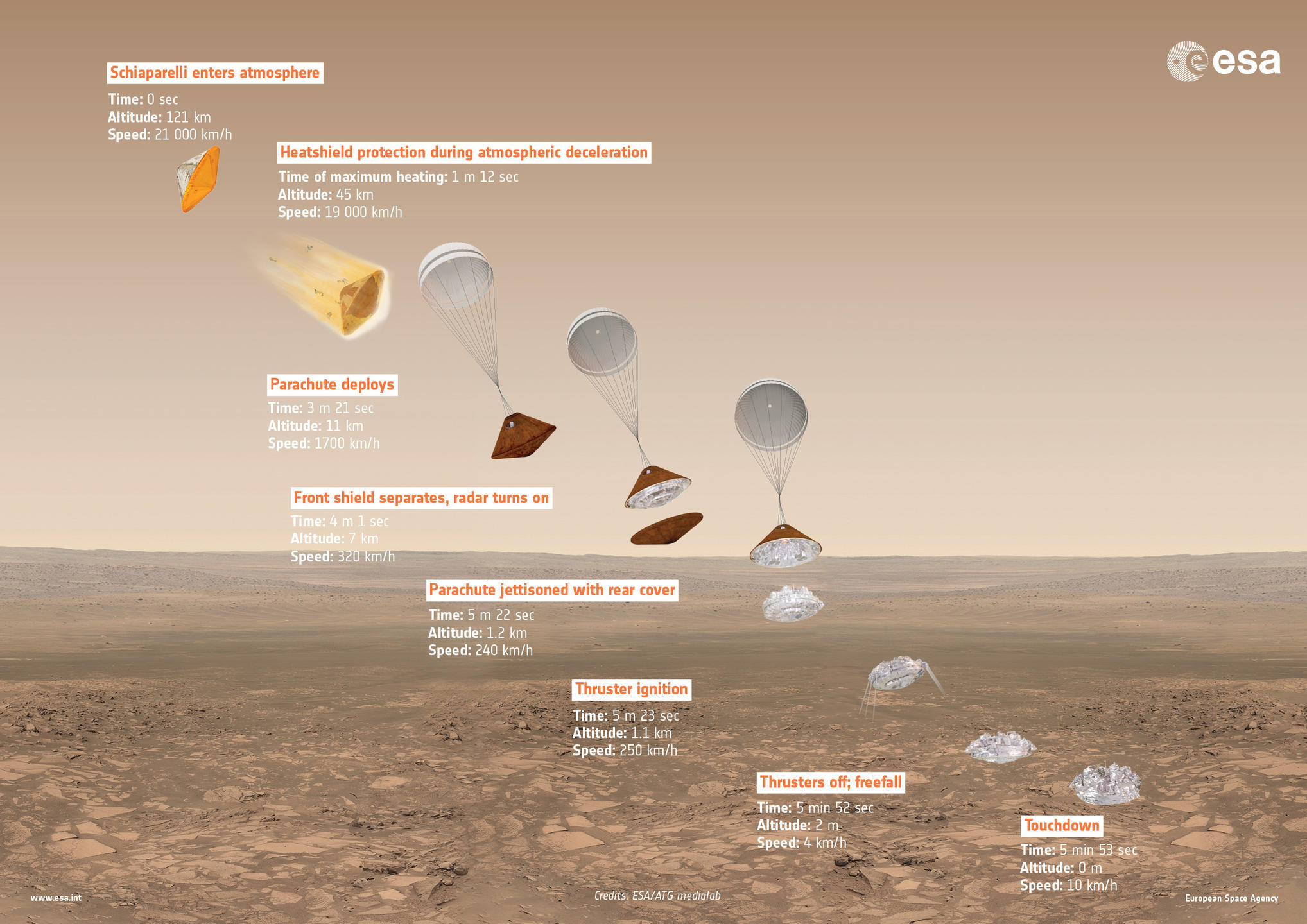 So we’re still actively searching for traces of life.
F.M.: Finding past traces of life remains the leitmotif of all scientific endeavors on the planet. This is why we try to find the most likely locations where life may have been possible. And the first step is always to study the topography from above, from the orbiters. This shows us that some areas have been altered by the presence of liquid water—meaning that conditions must have been favorable at some point, and for considerable periods of time, to allow liquid water to alter these rocks. These are the locations that we want to explore in more detail.

Mars Express included, there are now 5 satellites3 currently orbiting Mars. What will the sixth, the Trace Gas Orbiter, tell us that others can’t?
F.M.: The specificity of the TGO are the instruments that make up the Atmospheric Chemistry Suite (ACS) and the Nadir and Occultation for MArs Discovery (NOMAD). They will give us measurements that we have never had before. This data will be almost exclusively dedicated to characterizing with extreme precision the atmospheric composition of the planet and look for traces of gas—very small quantities. The technology used will provide data that is 10 to 100 times more refined than current measurements. We’re also using a method that has only once been used around Mars—on Mars Express. It is what we call solar occultation, which enables us to sound the atmosphere by analyzing it when the Sun sets or rises behind the planet. As photons travel through the atmosphere, some are absorbed by various gas components. These in turn create signatures that can infer on the type of gas. It is almost as accurate as using DNA samples, to make an analogy. 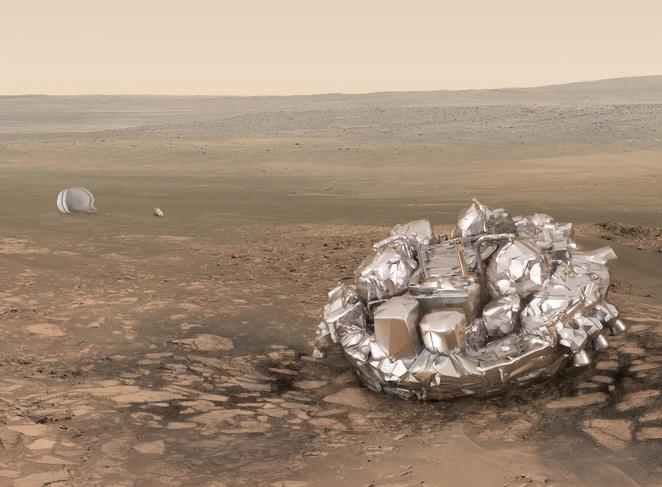 Artist’s impression of the landing demonstrator module, Schiaparelli, after having landed on the surface. 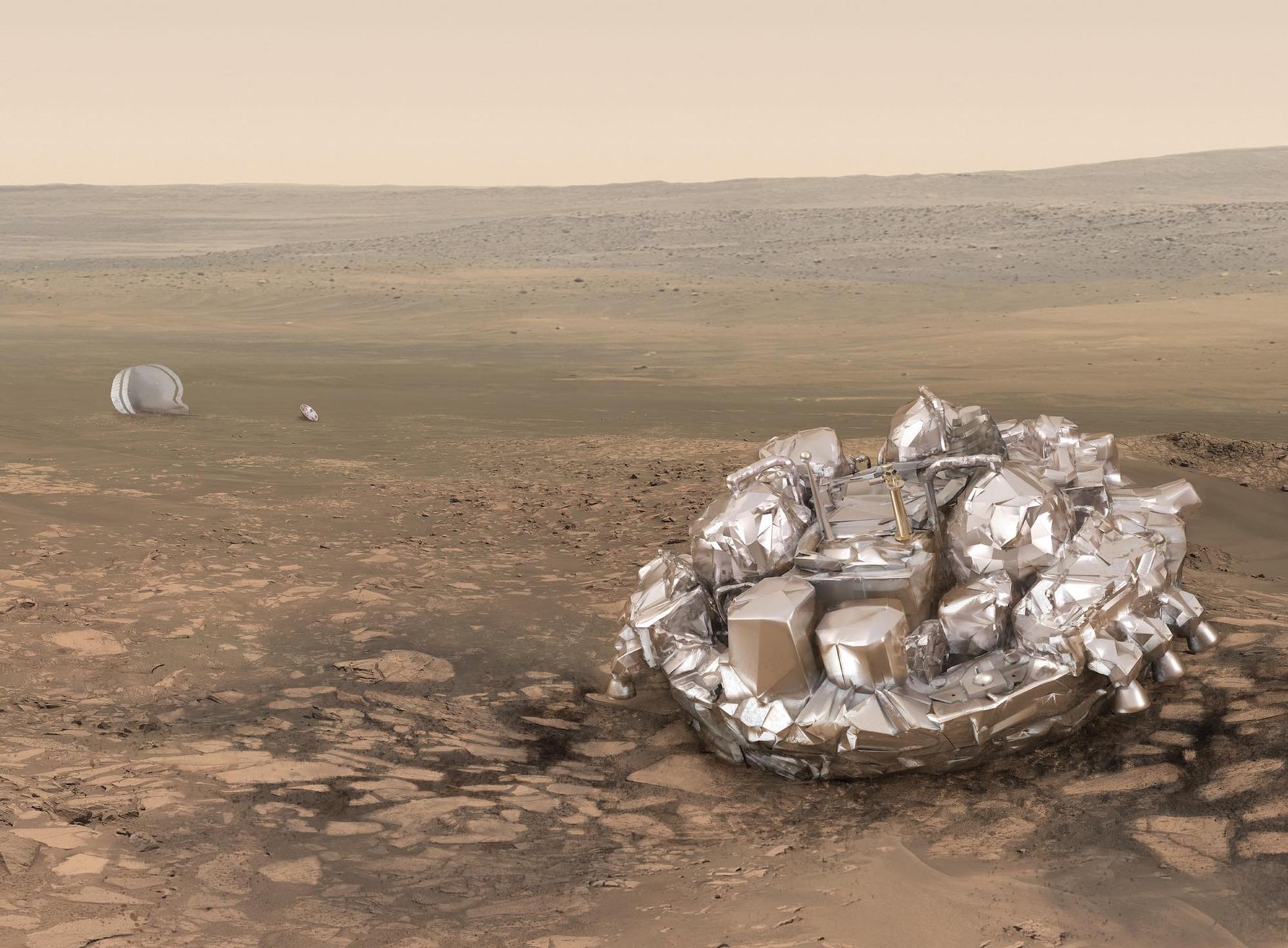 Are we looking for something in particular?
F.M.: The Trace Gas Orbiter was motivated by findings that there was methane in the atmosphere. This acted as a spark. We weren’t anticipating the presence of methane on Mars, which seems to be a signature of some kind of activity. We always hear that Mars is a dead planet, but this gas tells a different story. We know that life—organisms and living matter—is at the root of 80% of the methane found on Earth. So the first thing we thought was that it could have been the result of bacteria, microbes, etc. More likely, it could result from either photochemical or geological processes. This could mean possible underground aquifer networks putting in contact silica rocks with relatively warm water, which could lead to the release of methane gas. That would mean there is liquid water below the surface. And all this suggests that Mars is still ‘alive’ in some way. It is highly motivating to analyze not only methane, but all types of gases that could shed light on this activity. We want to compile a complete, precise inventory of all trace gases in the atmosphere—including those that we were not able to detect until now, possibly due to their minute quantities.

The orbiter could therefore also help identify a suitable landing site for the ExoMars 2018 rover?
F.M.: It will do several things, including act as a communication relay for the rover once dispatched on the surface. But indeed, it can contribute to finding a suitable site, although it is not the only satellite that can be used—and there is already a vast quantity of information about the surface of Mars that we can draw from. The vast collaboration of researchers in charge of identifying a landing site may have already focused their attention on 2 or 3 candidates.

You are not only the deputy-principal investigator of the Russian instrument (ACS) onboard the orbiter, but you are also the scientific director of one of the instruments scheduled to land on the Martian surface on October 19.
F.M.: Yes, that instrument is called Micro-ARES and is part of the Dust characterization, Risk assessment and Environment Analyser on the Martian Surface (DREAMS) suite of sensors fitted on Schiaparelli, the lander. 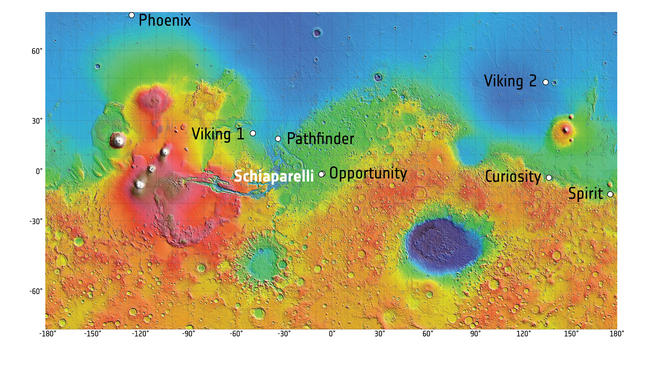 The Schiaparelli probe will land on Mars in a region known as Meridiani Planum. On this map are the landing sites of all seven rovers that have reached the surface of Mars. 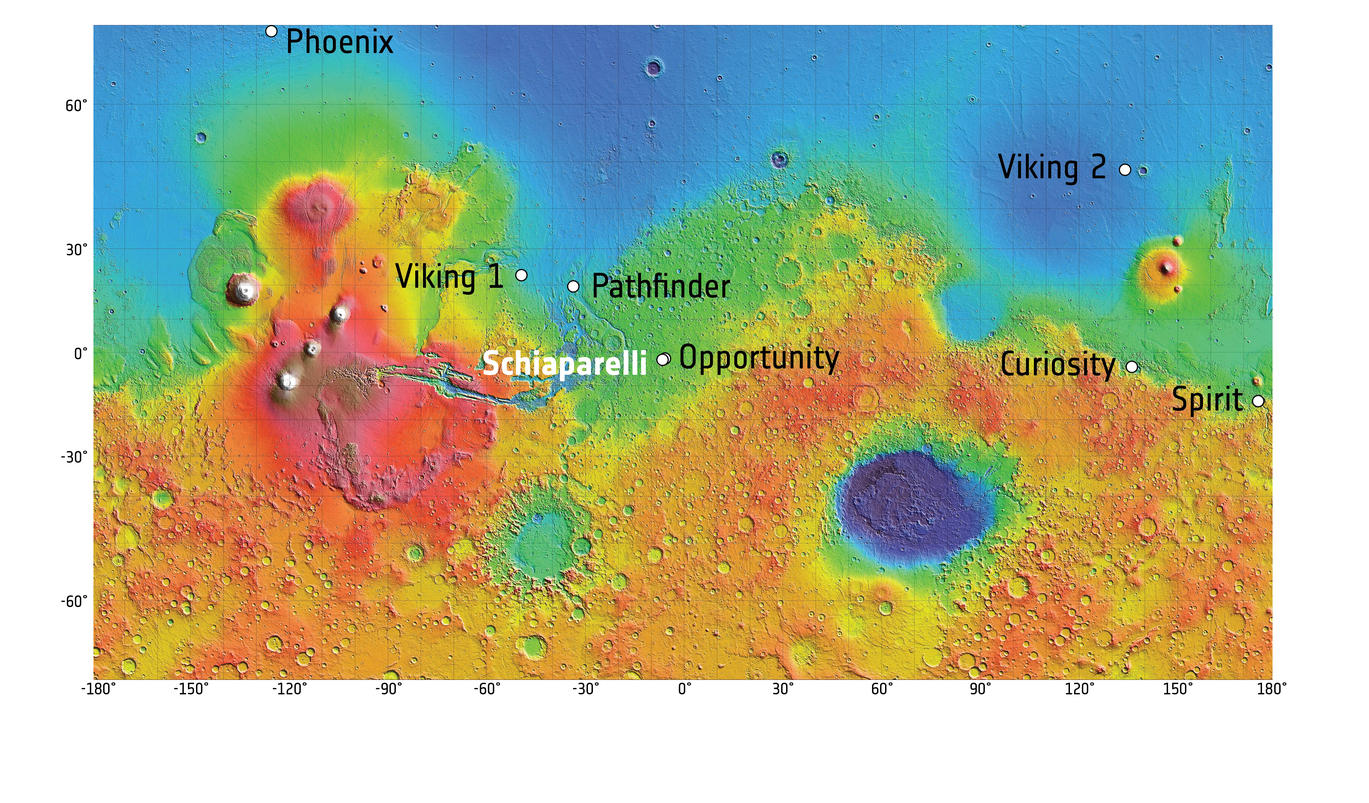 So Schiaparelli is more than just a test-run for the 2018 rover landing?
F.M.: This scientific objective  came later in the planning, because the main purpose of Schiaparelli is still to test the ESA’s capacity to land a probe on the surface. Micro-ARES is an electric field detector connected to DREAMS, which was conceived by Italy.4 Whiles DREAMS will be focused on measuring all the environmental conditions during the landing phase—like pressure, wind, humidity, etc.—Micro-ARES will be the first to explore the almost new scientific discipline of electric fields on Mars. There is a high probability that these exist on the surface of the Red Planet, and they may play a significant role on its chemistry and climate. This instrument is located at about 30 cm above the top of the lander, and will detect all electrostatic activity on the surface of Mars. This activity will be affected by mineral dusts, which abound in the atmosphere and create electric fields when particles collide. We know that this is the case on Earth, and that it may be strong enough to affect the processes that define dust movement on the Martian surface—something that controls most of the planet’s climate. That is the first scientific objective. The second is to ascertain whether these electric fields may catalyze chemical processes that would speed up the destruction of methane in the atmosphere. Indeed, not only were we able to determine the presence of the gas in the atmosphere, but we also noticed that it appeared and disappeared quite rapidly. One of the mechanisms put forward was the catalysis of powerful oxidizers caused by the movement of these dust particles on a large scale.

And Schiaparelli will have a short window to communicate all these findings.
F.M.: Yes, when it lands on October 19, the probe will function on batteries with an autonomy of 2 to 3 days.  After that, we’ll have to wait until the next phase of this European mission, ExoMars 2018…