An anticyclone (in white) in Jupiter’s upper atmosphere.
Enhanced image by Gerald Eichstädt and Sean Doran (CC BY-NC-SA) based on images provided courtesy of NASA/JPL-Caltech/SwRI/MSSS
Share
Share
The Juno spacecraft has been in orbit around Jupiter for nearly four years, shedding light on the dynamics and internal structure of the gas giant. CNRS News takes a look at the first results from the mission, which was initially planned to last 18 months but may now be extended until 2026.

Juno has now been in orbit around Jupiter for nearly four years, and has proved to be a resounding technical and scientific success. Researchers have only just begun to interpret the vast amount of data collected since the mission started. When NASA launched its probe in 2011 with the aim of investigating the internal structure, formation and dynamics of the gas giant’s atmosphere and magnetosphere, it was reckoned that the spacecraft would only be able to endure the planet’s dangerous radiation belts for 18 months at most. Initially, Juno was supposed to make a series of orbits that, every 14 days, would take it between the giant planet and its radiation belts, whose accelerated particles are potentially lethal to its onboard electronics.

A mission saved at the eleventh hour

However on 4 July, 2016, after the spacecraft had been inserted into a 53-day orbit round Jupiter, a malfunction in its main engine was detected, raising fears that the next burn – designed to shorten the orbit to 14 days – would be fatal. Since at least 35 flybys of Jupiter are needed for Juno to achieve its scientific goals, NASA was forced to push back the end date of operations from 2017 to 2021, tripling the length of the mission. 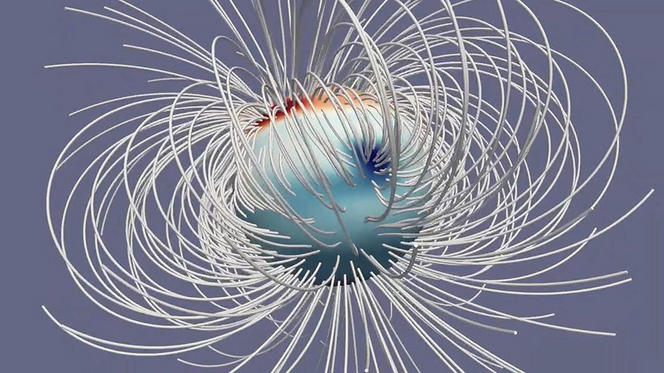 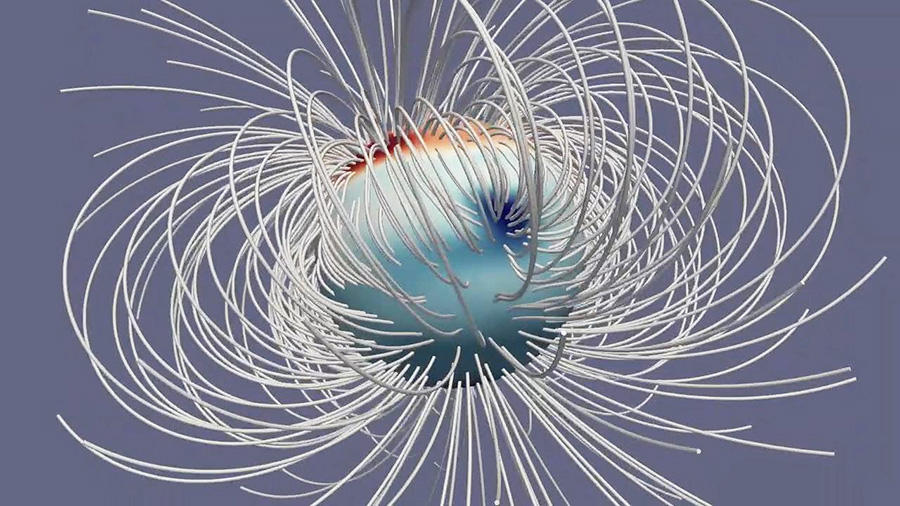 “Fortunately, the new orbit has exactly the same characteristics as the one initially planned,” explains Philippe Zarka, research professor at LESIA1 and a Juno co-investigator. “It passes over the poles and the equator at the same altitudes of around 10,000 and 5,000 kilometres. And it also covers a different longitude at every flyby, enabling the spacecraft to make use of Jupiter’s spin to scan the entire surface of the planet. Since the orbit is more elongated, there is also the added advantage that it crosses the magnetopause, a poorly understood boundary region beyond which Jupiter’s magnetic field no longer deflects the solar wind.”

As Juno begins its twenty-sixth orbit (out of the 35 planned), it can already boast some impressive achievements. One of the main goals of the mission was to map Jupiter’s gravitational field, which it has managed to do with an accuracy a hundred times greater than in previous attempts. The map has enabled the scientists to gain a better understanding of the nature of Jupiter’s interior. Rather than a solid metallic inner core as some theories suggested, the planet is thought to have a diffuse one, made up of chemical elements heavier than helium, and with a mass ten times that of Earth’s. According to the researchers, this supports one hypothesis among a number of others, namely that a collision with an object the size of Uranus took place at the time of Jupiter’s formation.

Juno has also provided valuable information about the atmosphere of the planet, whose mass is 318 times Earth’s. For instance, it has discovered that the well-known coloured bands seen at its surface are around 3,000 km thick, whereas the Great Red Spot is shallower, with a depth of a mere 300 km.  Data collected on earlier missions showed that this gigantic anticyclone, 15,000 km long and 12,000 km wide, appears to have shrunk considerably over the past thirty years. Juno may tell us more about this decline, which, if it continues, implies that this iconic feature will vanish within 35 years. 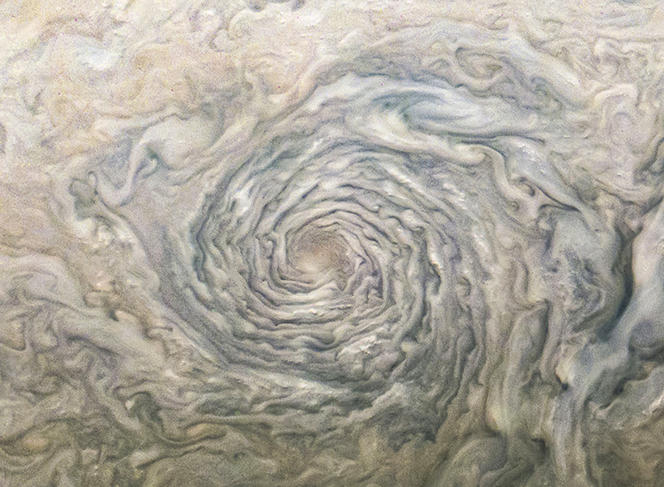 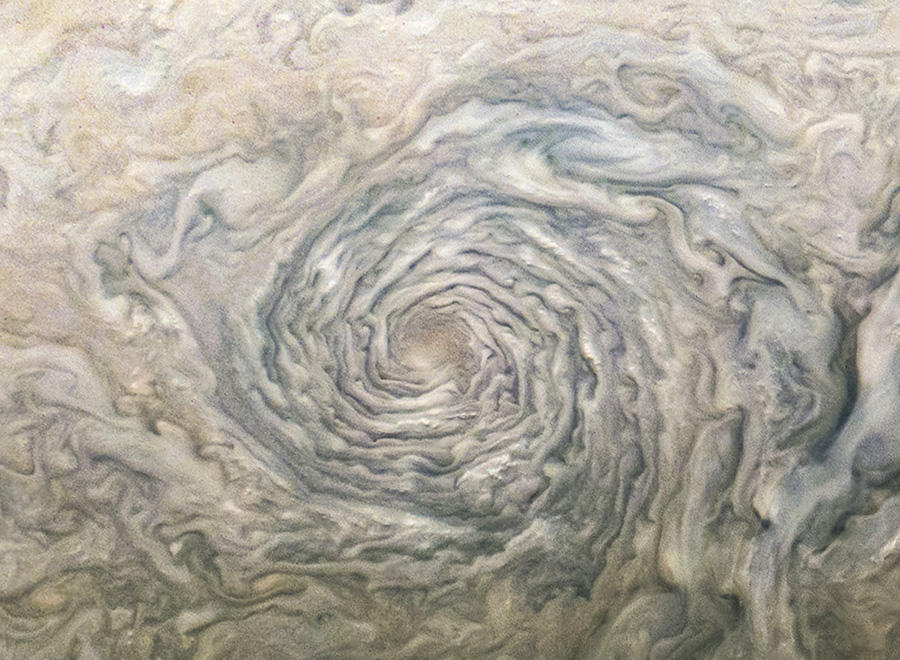 Juno is the first spacecraft to survey Jupiter outside its equatorial plane at such close range, apart from brief, more distant flybys carried out in 1974 by NASA’s Pioneer 11 and in 1992 by NASA and ESA’s Ulysses missions. It has for example sent back unprecedented images of the poles, where astronomers were amazed to see groups of cyclones evenly distributed around a central vortex: eight at the north pole forming an octagon, and five at the south pole arranged at the points of a pentagon.

Another great mystery surrounds Jupiter: where is its missing water? Measurements carried out in 1995 by the Galileo mission’s atmospheric probe just before it disintegrated detected very little water.  However, data collected by Juno appears to show that, in some regions, the mist of ammonia that covers the planet conceals clouds of water vapour circulating at lower altitudes. “Although this contradiction hasn’t yet been resolved, Juno has observed widely varying concentrations of some gases such as ammonia across the whole planet, as well as an abundance of lightning from thunderstorms near the poles,” Zarka explains. “This lends weight to the idea that Galileo plunged into an especially arid equatorial region, but that elsewhere water is certainly present.” 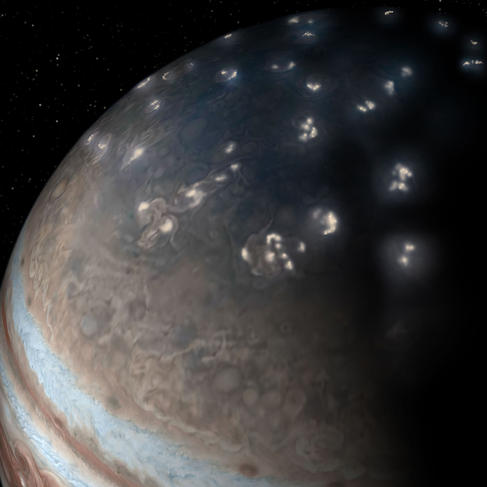 Artist’s view of thunderstorm activity in Jupiter’s northern hemisphere, based on data collected by the JunoCam instrument. 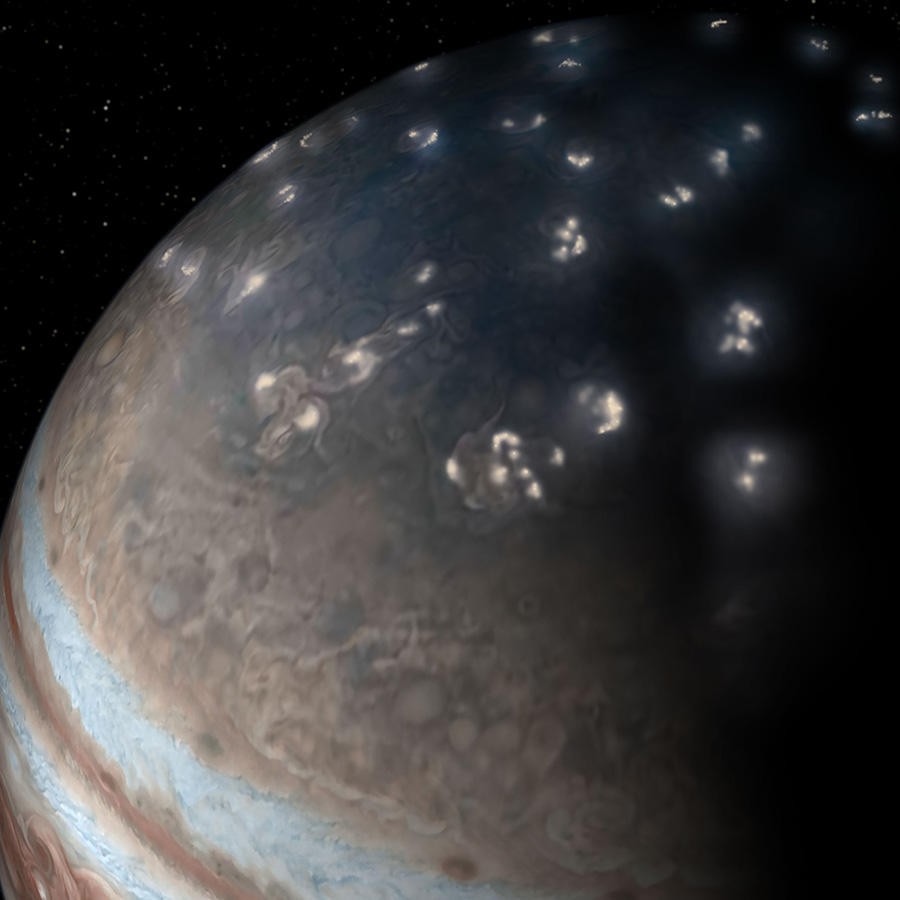 Last but not least, NASA’s spacecraft has measured Jupiter’s magnetic field so accurately that, by comparing the data with that collected in 1973 and 1974 by the Pioneer 10 and 11 missions, it has proved possible to establish that the field undergoes variations on centennial timescales, just like the Earth’s. This information enabled the team at LESIA to model the properties of Jupiter’s radio emissions.

In any case, Juno’s mission is far from over. As its new flight plan means that it crosses the radiation belts less frequently, and since the latter are not as aggressive as expected, the total amount of radiation striking the spacecraft is lower, enabling it to survive longer. Consequently, the researchers intend to ask NASA to extend its operation by five years, for a total of 77 completed orbits. With three goals in mind: to collect more data, study Jupiter’s environment at a period of increased solar activity, and carry out multiple flybys of Jupiter’s moons Ganymede, Europa and Io.