Chokniti/Stock.Adobe.com
Share
Share
On the occasion of Cosmetic-360, an international trade fair for innovation in the cosmetics industry held in Paris every year, a quick overview of ongoing research in CNRS laboratories, which are already at work on the cosmetics of the future.

Organized by the Cosmetic Valley business cluster with the participation of the CNRS, the Cosmetic 360 trade fair highlights the needs of an industry that has not been affected by the crisis, with 200 billion euros in revenues worldwide and 4% growth per year. “It is also an industry that is highly based on innovation, with 3% of revenues being reinvested in R&D, an industry in which French actors have many opportunities to shine, from major luxury goods groups to a network of 1,500 companies totaling revenues of 20 billion euros,” explains Benjamin Morlon, from the technology transfer department of CNRS Innovation.

“The abundance of research conducted at the CNRS has contributed greatly to all of these actors,” he adds, pointing out that in 2015, the Cosm’actifs research network (GDR) was formed to combine the effort of 48 teams. In the field of cosmetics, the CNRS today counts a portfolio of 130 families of patents co-exploited with industrial actors, or awaiting exploitation, on subjects that correspond to central issues for the industry: understanding the fundamental mechanisms of skin, developing new and sustainable active ingredients, and finding innovative formulations. “Services can include occasional contracts for an industrial actor, or co-developments with a share of the results and profits. A portion of revenues can thus be directed toward the CNRS, with the remainder going directly to the laboratories who authored the patents in order to finance their basic research,” Morlon emphasizes. 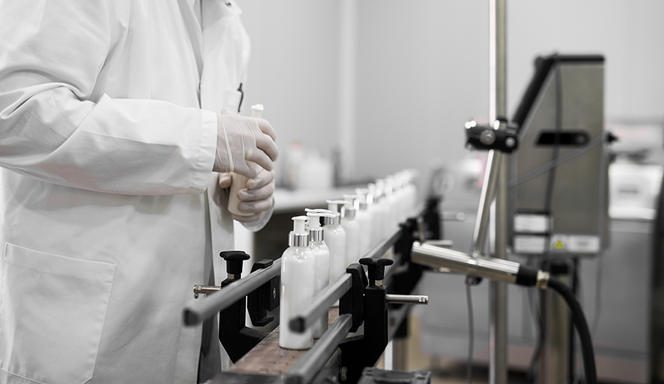 Cosmetics fabric worker taking one liquid soap from a row on a fabric line. 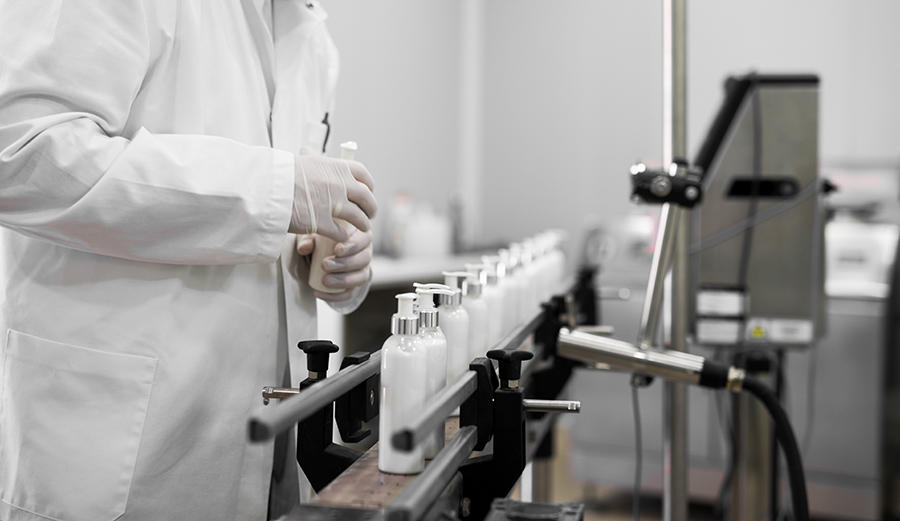 At the LBTI,1 researcher Patricia Rousselle is focusing, for instance, on the mechanisms of skin regeneration for the scarring over of wounds, in addition to skin ageing. She is specifically studying what are known as “extra-cellular matrix” proteins, a group of proteins that surrounds epidermal cells—like a coat—and plays a fundamental role in their renewal. “We have identified highly ‘targeted’ areas on these large proteins that are highly reduced but also very interesting. When these targets are accessible, they play a leading role in cell renewal by reacting to signals from the external environment,” Rousselle relates.

These results are particularly interesting for industrial actors: “we help them enter this microscopic world and identify these targets, so that they can then develop products that can stimulate or regenerate cells,” the biologist adds. The patents for these mechanisms filed in joint ownership with BASF and the laboratories in Anjou or Alès are already behind a number of products on the market. “Aside from the rewarding side of seeing the application of our research results, I have also observed that industrial actors are increasingly asking fundamental questions regarding biological mechanisms, which enables the continuation of research that we are otherwise conducting,” Rousselle says enthusiastically.

A well-known issue within the cosmetics industry is the renewal of active compounds. The work of CNRS senior researcher Isabelle Rico-Lattes from the IMRCP laboratory,2 on what are known as “amphiphile” active ingredients, has helped bring to market since 2006 (in partnership with Pierre Fabre laboratories) the Trixeira product line by the brand Avesne, intended especially for treating eczema. Amphiphile compounds have the distinctive feature of interacting with the organism by surrounding themselves with both water and lipids, becoming both an active ingredient and its own container, in keeping with green chemistry processes.

Cutting-edge research: “research on active ingredients that are bio-sourced and more respectful of the environment responds to strong societal expectations, with some compounds from traditional chemistry no longer being desirable in the eyes of consumers,” Morlon underscores. It is on these issues that Richard Daniellou from the ICOA3 is also focused: “We seek to obtain active ingredients through the action of enzymes synthesized by bacteria. These reactions are sustainable, since they take place in a water-based environment, and require neither high-temperature processes nor chemical purification,” Daniellou explains. The key issue is to then effectively use these enzymes, which attack natural substrates such as sugar to generate a variety of new molecules. “By studying a large number of unknown reactions with many enzymes, we have obtained molecules banks that can be of interest for industrial actors as hydrating agents, gels, pigmentation agents, etc.” Daniellou highlights.

Yet cosmetic products are not limited to active ingredients, with there being two complementary research focuses. The first is formulation, that is to say the “dilution” of the active compound within other ingredients in different forms—think creams, gels, oils—in order to preserve its properties over the long term. The second is vectorization, which enables its delivery as close to the target as possible, in order to achieve maximum effect. In this regard, researchers from the  LCPO4 have filed co-patents with the Spanish technical center Cidetec, for a new category of surfactants that can adapt to the condition of the skin.

“The role of surfactants is to maintain the interface between the dispersed phase and the continuous phase of the emulsions that make up all creams. For example in mayonnaise, the surfactants are provided by the proteins in the egg yolk, and serve as the interface between the water of the egg white and the oil,” outlines laboratory director Sébastien Lecommandoux. “The surfactants that we developed here are capable of reacting with the acidity of the outer layers of the skin, which varies depending on the latter’s condition. Concretely, this enables the creation of emulsions that break over cutaneous areas that are sensitive, due to the particular pH level, and thus locally release a reparative compound.” These patents are so promising that a CNRS/Cidetec joint venture is being created to ensure its exploitation!

The importance of formulations is such that a joint laboratory between LCPO and L’Oréal was also launched in January 2018. “The objective is to find more natural and sustainable formulations, while preserving the performance of products and even improving it,” Lecommandoux stresses. His team has already published results in the journal Nature on a formulation based on two polymers, a protein, and a bio-sourced polysaccharide, whose combination forms particles that are specific to certain biological receptors of skin cells. “These particles can convey active compounds toward irritated areas, which opens the way for cosmetics that are personalized in accordance with skin characteristics.” For the researcher, l’Oréal’s reach is an advantage: “we are working with the company’s research branch. The orientations, which we define together, are entirely compatible with our own areas of focus in basic research.”