Hybrid Technology Takes to the Skies

Hybrid Technology Takes to the Skies

The democratization of air transport and the rise of pollution seem to go hand in hand. Every day, some 100,000 flights carry passengers and cargo across the globe, but such large-scale access to planes comes at the cost of a hefty carbon footprint. In 2015 alone, flights generated 781 million tons of CO2— “only” 2 % or so of human-induced CO2 production that year, but a figure liable to rise as the aviation industry continues to spread its wings. Environmental concerns raised by this type of transportation mean that governments and industry players agree on one point: more energy-efficient aeronautics solutions are crucial for ensuring our planet’s future.

In pursuit of this goal, the HASTECS1 research project, which kicked off September 13, 2016, brings together researchers in electrical, chemical and thermal engineering to assess and optimize hybrid propulsion technology: an energy solution for the aircraft of tomorrow. So how does it work? Much like in hybrid cars, the technology supplements traditional fuel-burning internal combustion engines with electric motors supplied by power electronics associated with auxiliary sources such as batteries or fuel cells.

HASTECS was launched to meet Europe’s vision for a greener aviation industry defined by ACARE,2 the European aeronautics research network that brings together the European Commission with industry players. In concrete terms, ACARE’s Flightmap 2050 sets aggressive goals for the European aviation landscape, namely 75% fewer CO2 emissions, 90% fewer nitrogen oxide emissions and 65% less flying aircraft noise by 2050 compared to 2000 levels. To help make this a reality, a number of initiatives have emerged—among them, Clean Sky. This research program, launched in 2008 through joint funding by the European Union and the aviation industry, nurtures the development of aircraft with enhanced environmental performance. As Clean Sky concludes in 2017, Clean Sky 2 is stepping in to carry the initiative forward to 2024, with a fresh budget of some €4 billion: over €2 billion from industry investments and €1.8 billion from Horizon 2020.3 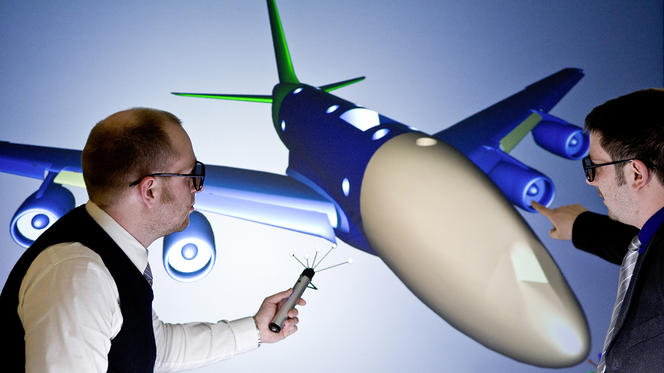 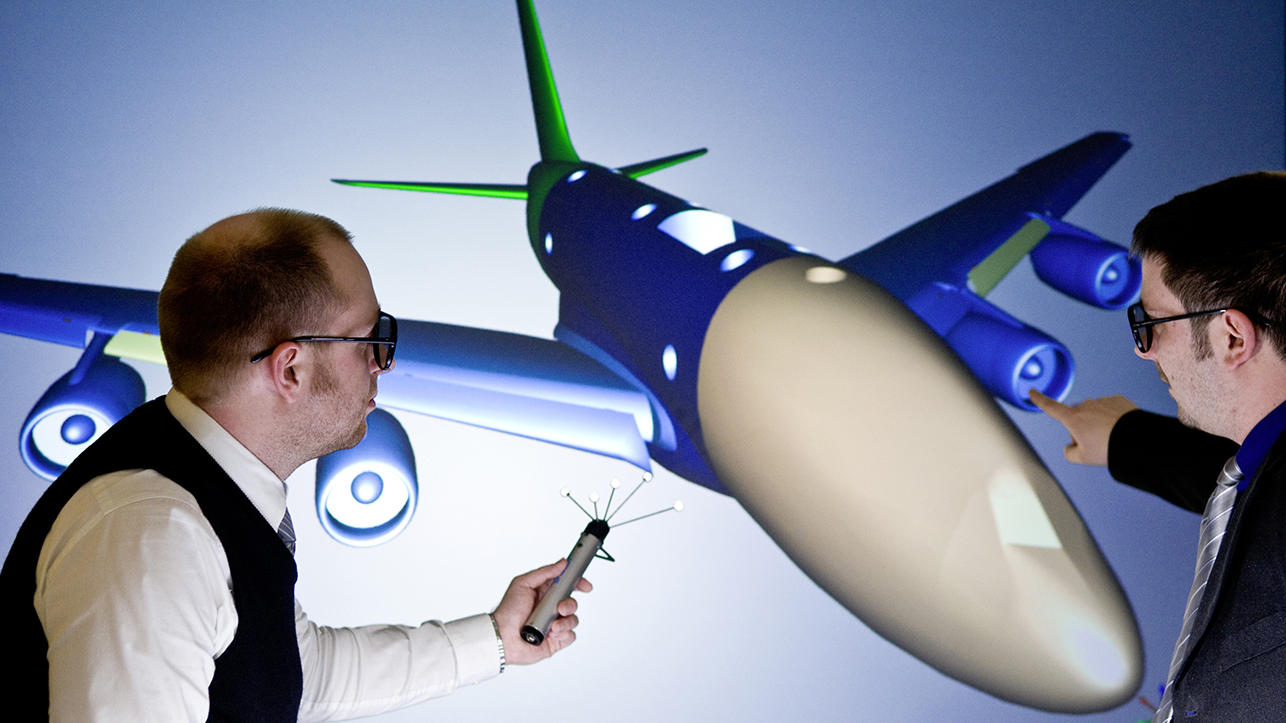 Tomorrow's aircrafts first take shape virtually, letting designers and researchers see future systems and components in unprecedented detail, and from all directions.
DLR (CC-BY 2.0)
DLR (CC-BY 2.0)
Share
Share
Our aim is to achieve in aircraft what has already been done in cars.

HASTECS is one of the ambitious projects to be born in this context singling out energy-efficient aviation as a European priority. Endowed with a €1.5 million Clean Sky 2 grant, the French project, piloted by the INP4 of Toulouse with the laboratory LAPLACE,5 builds on earlier research conducted there in conjunction with Airbus, a Clean Sky 2 industrial partner. Also on board are the CIRIMAT6 and Pprime7 laboratories. Supporting 6 PhD theses and 2 post-doctoral positions, the consortium’s objective is to develop models and design tools for hybrid electric propulsion in aircraft.

From cars to planes

“We’re all familiar with hybrid electric vehicles on the road. Our aim is to achieve in aircraft what has been already done in cars, by developing efficient energy chains which partially rely on electrical power,” explains HASTECS coordinator and LAPLACE researcher Xavier Roboam. Hybrid propulsion can offer the same advantages in aircraft as in cars: a vehicle relying on an electric motor burns no fuel, and so has no noxious gas emissions, while its noise levels fall radically. “There’s nothing quieter than an electric powertrain when you compare it to a plane engine,” Roboam adds.

But if hybrid propulsion is increasingly common in cars, there exist many technical challenges that have kept it grounded. “The more weight added to the plane, the more fuel it will consume. Hybrid planes are naturally heavier than conventional ones because of the extra electric components they carry. This extra weight consumes all the more fuel in planes because they—unlike cars—need to climb. So the challenge is to find the winning compromise.” This means offsetting this additional weight and fuel consumption by very high-energy performance and aerodynamic advantages.

Flying also follows a different cycle than driving. Traffic and road conditions typically prompt drivers to accelerate and decelerate, and hybrid car technology has adapted to this rhythm, notably via regenerative braking, which slows down the vehicle by transforming its energy into something that can be stored in batteries for future use. In planes however, brakes are only used during landing, with flight cycles summed up by taxi, takeoff, climb, cruise and landing. And indeed, as the dominant phase—cruising—is one in which “thermal engines running at full capacity are comparatively efficient,” says Roboam, hybrid technology can only really become viable in planes when it is developed for alternative uses.

When the future takes a different shape

The researcher identifies two such uses. First, electric energy sources can be inserted into aircraft architectures to produce “more aerodynamically efficient configurations.” For example, electrically powered propellers, which would no longer need to be coupled with internal combustion engines, could be repositioned or spread along wings to reduce drag.”

Second—and this is HASTECS’ focus area—it is feasible to rely on electric power during specific flight phases, especially when engines are operating at reduced power, as during taxiing on runways or descent. “The use of electric power in these phases is more energy efficient than thermal engines running on kerosene,” explains Roboam. In addition, the team is probing the potential of electric power to provide boosts of energy for particular sequences, for example during take off or the “top of climb” phase when planes are about to reach their cruising altitude—a direction well worth exploring as this solution opens up the possibility of engine downsizing, and hence, critical weight reduction. 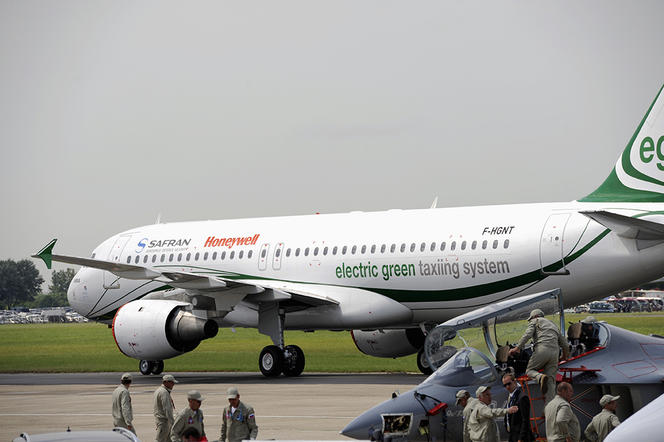 Demonstration during the 50th International Paris Air Show (2013) of the electric green taxiing system (EGTS) developed by Safran and Honeywell, a device designed to enable an airplane to taxi with its engines shut down. 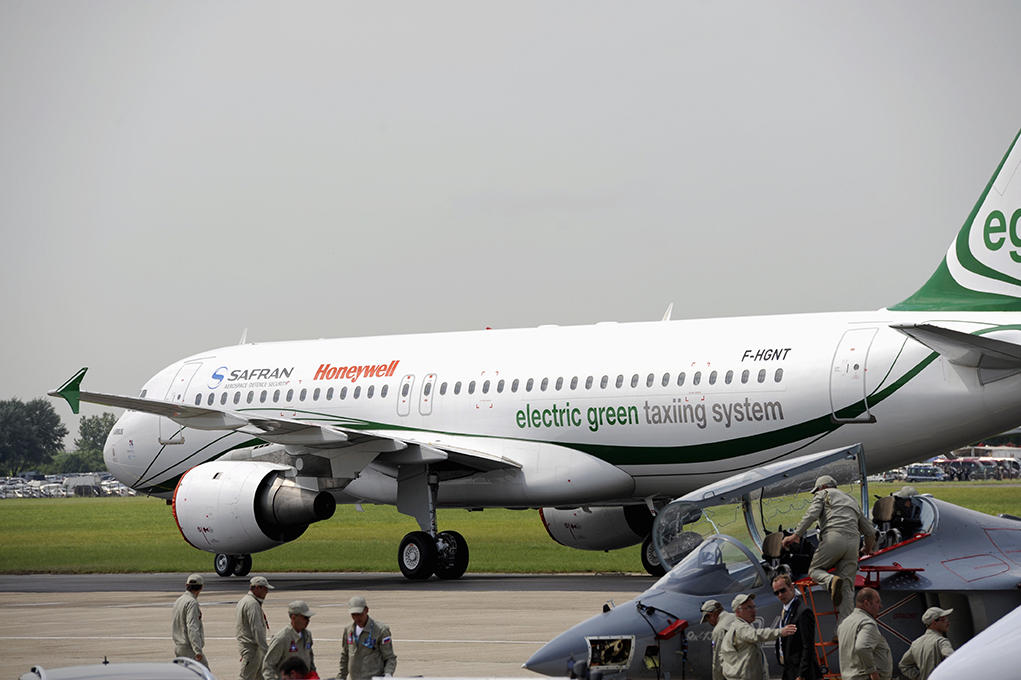 Demonstration during the 50th International Paris Air Show (2013) of the electric green taxiing system (EGTS) developed by Safran and Honeywell, a device designed to enable an airplane to taxi with its engines shut down.
G. ROLLE/REA
G. ROLLE/REA
Share
Share

From energy conversion to batteries

To develop electric power sources for reduced-power phases or energy boosts, the French team is taking a comprehensive approach. On the one hand, the project addresses the design of individual electric and thermal components such as electric machines, power converters, batteries, heat exchangers, cooling systems and cables; on the other hand, it also examines the overall integration of components into systems. To cover the broad range of skills required by this complex task, the participating labs contribute different branches of knowhow: LAPLACE specializes in energy conversion for the supply of electric power devices such as power electronics, electric machines and fuel cells; CIRIMAT focuses on high-energy density batteries for storing large energy volumes; and Pprime investigates thermal management in electric machines and power electronics.

As HASTECS seeks to lift the capacity of electric power sources by researching “unprecedented voltage levels,” says Roboam, one particular challenge has to do with partial discharges. This phenomenon, which is due to fatigue in insulating material exposed to high voltage levels—accentuated by depressurization at high altitudes—not only degrades equipment but may also cause power loss. To counter the problem, the researchers—namely at LAPLACE— set out to design more resistant insulating materials.

HASTECS is scheduled to run until 2021, but in fact casts its sights far beyond. Indeed, the project places a focus on target-setting tools, which Roboam describes as “offering technological forecasts on what we can and should aim for on the basis of today’s materials and technologies.” The team set two target dates: 2025, when they anticipate coming up with workable designs for electric machines and power converters; then 2035, when they aim to further reduce the weight of these components in relation to the level of power they generate. According to their estimations, between 2025 and 2035, the fuel consumption of a standard-sized regional hybrid plane may be cut by 3.5 % on a short-range flight—purely due to the loss of 1.8 tons in equipment weight. All forward-looking targets which help HASTECS lay the foundation for a greener future.

This project has received funding from the Clean Sky 2 Joint Undertaking under the European Union’s Horizon 2020 research and innovation program under grant agreement No 715483.