Thomas Ebbesen, now director of the International Center for Research in Chemistry (ICFRC) and the Institute for Advanced Studies at the University of Strasbourg (USIAS) has been awarded the 2019 CNRS Gold Medal (read the press release). The following profile was published in its initial version in January 2015, a few weeks after he received the Kavli Prize, the most important award in nanoscience.

"Trying to anticipate discoveries doesn't make sense: genuine findings are always accidental in the course of research, in other words in the exploration of the unknown" muses Thomas Ebbesen. This French-Norwegian scientist, today the director of the University of Strasbourg Institute for Advanced Study (USIAS), speaks from experience. In September 2014, he was awarded the prestigious Kavli Prize in Nanoscience for his fortuitous discovery of hitherto unsuspected properties of light. Yet before the lucky day in 1989 that was to lead to this breakthrough, Ebbesen's life and career had already taken him around the world. He grew up in Norway, the son of an artist and a Royal Norwegian Air Force officer. In 1964, his father was transferred to the Norwegian delegation to NATO, and the family moved to Paris. Except for an 18-month stay in Brussels, he lived there until 1972, when he obtained his baccalaureate in math and physics. After a year traveling the world on board a Norwegian freighter to "take a breather," he had a choice between several US universities to pursue his studies, and opted for Oberlin College (Ohio). "This was the best choice I ever made," Ebbesen says. With good reason: it was there that he developed a passion for physical chemistry, gave free rein to his penchant for art—in particular by setting up a photography cooperative—and met his future wife, the Japanese pianist Masako Hayashi, with whom he still shares his life.

After graduating from Oberlin, writing his doctoral thesis on artificial photosynthesis at Pierre-et-Marie-Curie University (Paris) and carrying out post-doctoral research at Notre Dame Radiation Laboratory (Indiana, US), his career took him to the University of Tsukuba (Japan). There, he was soon recruited by the NEC corporation, which was looking for young talents for its fundamental research laboratory. "Working conditions were extraordinary," Ebbesen joyfully recalls. "We benefited from the considerable financial resources of the private sector, but also enjoyed a great deal of freedom, as if we were in a public institution. We could do all the research we wanted."

One day in 1989, he came across an article by physicist and future Nobel Laureate (2012) Serge Haroche, describing cavity quantum electrodynamics. Ebbesen's "childlike curiosity," as his wife puts it, prompted him to carry out an experiment on the subject. To do so, he asked a colleague to make nanoscale test tubes, in other words, microscopic metal plates pierced by an array of regularly-spaced cylindrical holes, each 300 nanometers in diameter, all assembled on a glass plate.

To Ebbesen's surprise, light shone on the plate traveled right through it. How was this possible, with holes smaller than the wavelength of visible light? The light waves, whose wavelengths range from 400 to 700 nanometers (nm) between violet and red, should not have been able to efficiently cross the 300 nm-diameter holes. Dumbfounded, Ebbesen and his colleagues repeated the experiment time and time again, with the same result. Even more disconcertingly, it appeared as if the light passed through an area three times larger than that occupied by  the holes i.e. as if it could travel through the metal. For eight years, Ebbesen endeavored to solve the mystery, while pursuing other research at NEC. Yet he never gave up. "I had enough experience to know that I wasn't making an experimental error," he says. "Moreover, some of my colleagues, like fellow scientist Shunji Kishida of NEC Labs, kept urging me to keep going and not lose heart." 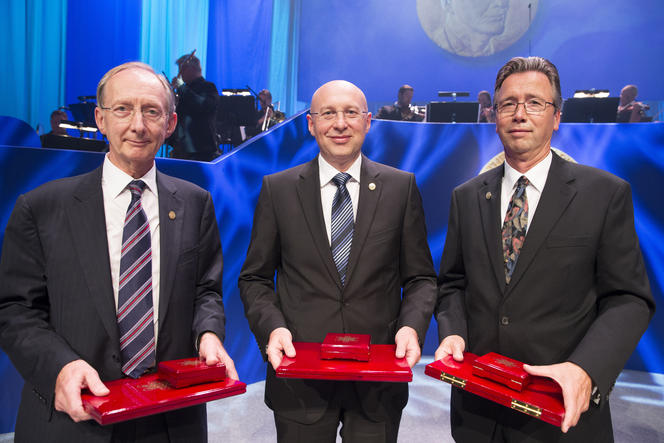 On September 9, 2014, in Oslo, Thomas Ebbesen, Stefan W. Hell. and Sir John B. Pendry (from right to left) received the Kavli Award for their work in nanoscience, the equivalent of the Nobel Prize in this field. 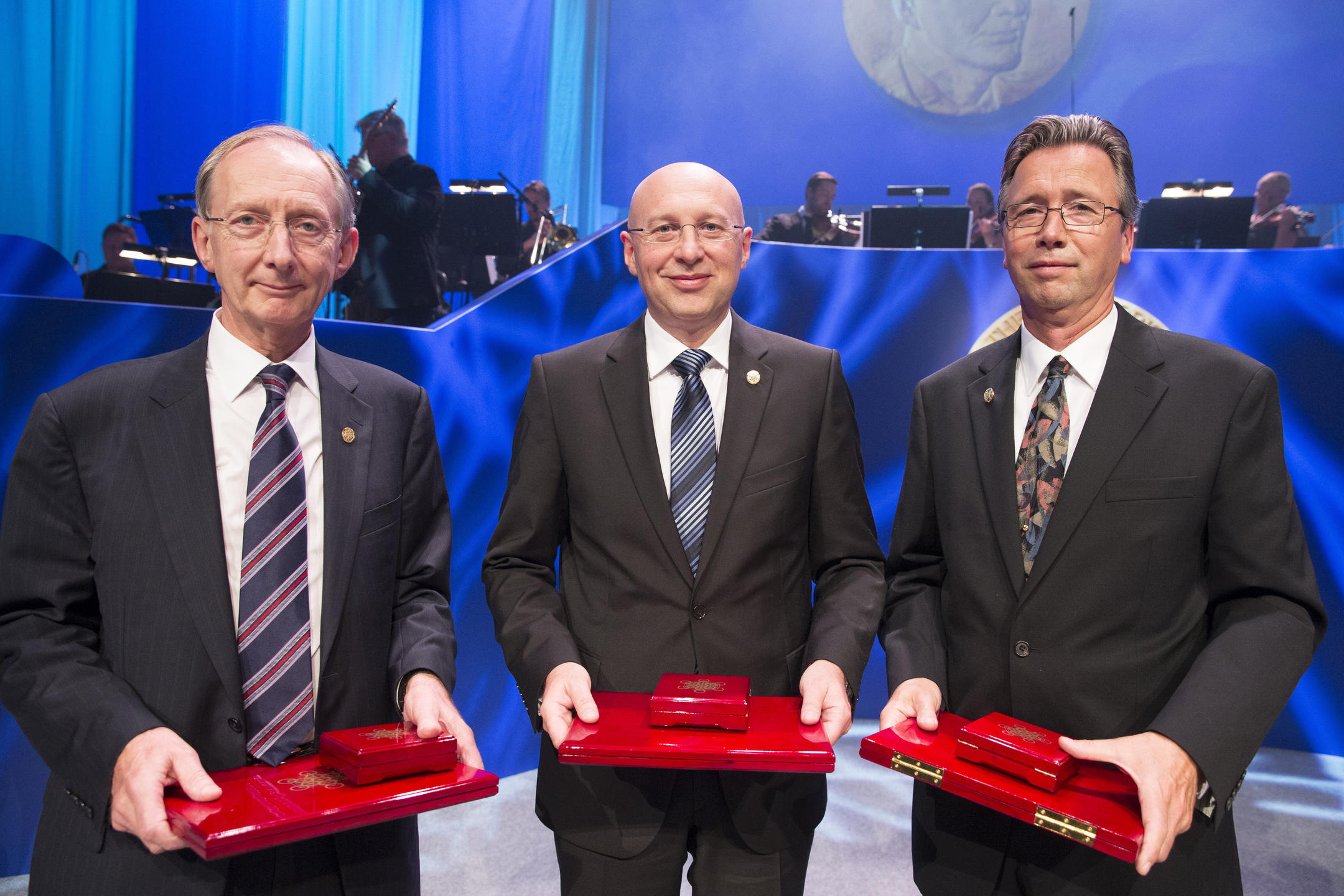 On September 9, 2014, in Oslo, Thomas Ebbesen, Stefan W. Hell. and Sir John B. Pendry (from right to left) received the Kavli Award for their work in nanoscience, the equivalent of the Nobel Prize in this field.
DNVA.NO
DNVA.NO
Share
Share

And the light dawned

They were well advised to do so, for their support and Ebbesen's perseverance allowed this strange phenomenon to be well understood today. In fact, the array of holes behaves like an antenna. The free electrons randomly gather together on the metal plate—a conducting surface—in groups called plasmons. These plasmons adapt themselves to the periodicity of the array, in other words the spacing between the holes. They are said to come into resonance with it, forming a sort of magnifying glass above each hole: they focus the photons that fall onto the holes, and re-emit them. "Although initially the probability of a photon passing through the holes is very low, the 'magnifying glasses' considerably increase this probability," Ebbesen explains. "This  concentrating effect is so high that more light is transmitted than allowed by the surface area occupied by the holes." This finding has a wealth of applications, such as improving the quality of lasers or increasing the efficiency of optical fibers.

This discovery of a new property of light in the 1990s, thought for decades to hold no more secrets, certainly caused a stir. And when Ebbesen gave his speech at the Kavli Prize award ceremony, the astrophysics laureates, who use light to probe the Universe, were surprised. "I keep telling my students that many things we have no inkling about what remains to be discovered," he adds." Didn't Albert Einstein say: 'As our circle of knowledge expands, so does the circumference of darkness surrounding it'."

Ever since his breakthrough with arrays of holes, Ebbesen has never stopped exploring the unknown. In addition to the Kavli Prize, he has been awarded several prestigious distinctions (including the Agilent Europhysics Prize, for his work on nanotubes), and jointly holds some 30 patents. And at 60, he has no intention of calling it a day. "I'm currently working on hybrid light-matter states, and I've never had so much fun in my life!" he enthuses.

History repeats itself: after re-reading the article by Serge Haroche, whose work—along with that of Claude Cohen-Tannoudji—is a constant source of inspiration, he took on this new challenge. "With my teams, we've managed to change the properties of matter (conductivity, chemical reaction rate, enzymatic activity, etc.) by placing molecules on an array of nano-holes or by using mirrors," he explains. "We don't even need any light: quantum vacuum fluctuations, the very ones that may partly give rise to dark energy, cause matter to come into resonance with the array, a phenomenon that modifies the molecules." No doubt this bodes well for fascinating new papers. And it is further proof, if one were needed, that genuine discoveries do not stem from planned, applied research, but rather from insatiable, childlike curiosity.

Slideshow
Ten samples that have marked the history of chemistry
nanoscience