How to Improve Police-Citizen Relations

How to Improve Police-Citizen Relations

French police officers of the BRF (Railway Network Squad) controling a man during a patrol in the Paris subway.
FRANCOIS GUILLOT / AFP
Share
Share
A large comparative study of police-community relations around the world was recently published. If situations vary according to countries and regimes, some countries—like France—could do better. How to restore trust between the police and citizens? We asked political scientist Sebastian Roché, who co-authored this study, to shed light on its key findings.

Relations between the police and citizens may be good or bad, and vary from one country to another, as detailed in the comparative study that you have just published1 with the sociologist Dietrich Oberwittler2… But what conclusions can we draw from these analyses?
Sebastian Roché:3 The trust placed by a population in the police forces is an important factor in social cohesion. The more citizens perceive the actions of the police as legitimate, the more they adhere to the political system. Conversely, those who support a given political regime will be more inclined to support the police. While these phenomena may appear self-evident, until now, most of the scientific literature has revolved around the United States, and thus the American police system which is municipal in essence. In our study, however, we compare countries like France, Germany, Turkey, Nigeria and even Japan. New and standardized instruments to assess legitimacy were created during the Euro-Justis project (supported by the French National Research Agency, ANR) and have been used in several countries. In this study, we show that the relations between a police force and a population vary according to the national context (national culture, well-functioning institutions, and we suggest ways of improving the situation, particularly in France and Europe. At a more basic level, we hope to contribute to the analysis of political legitimacy and its foundations, of what makes a person subscribe to a particular political order or, on the contrary, reject, or even fight back against that order.

What are the key trends worldwide, what makes us trust or mistrust our police forces?
S.R.: Equal treatment is a key pillar in instilling confidence, which must be understood in two ways. First there are matters relating to “distributive justice” by the police, which consists in particular of equality with regard to police stop-and-search or police assistance. In general, this principle is rarely respected. In countries where checks are frequently carried out, some segments of the population, minorities, are targeted more than others. This is not always deliberate, and many police officers are sincere when they say that they do not discriminate, but unconscious bias and professional routines exist nevertheless. Conversely, some types of police conduct may be deliberately discriminating or stigmatizing. Next, there is the issue of unequal treatment during face-to-face encounters, or “procedural justice.” In concrete terms, this means the manner in which checks are carried out, which plays a key role in building confidence. Are you shown respect? Are you allowed to express your point of view? Clearly, the situation is critical in authoritarian regimes, in which the population and persecuted minorities barely ascribe any legitimacy to the police whereas partisans of the regime generally have confidence in the forces of law and order. But these two mechanisms—distributive and procedural justice—also play a role in democracies. 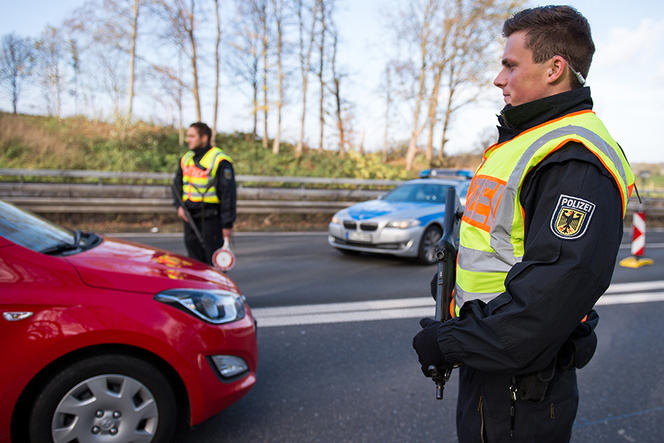 German police controling cars along the A44 motorway close the German/Belgian border near Aachen. 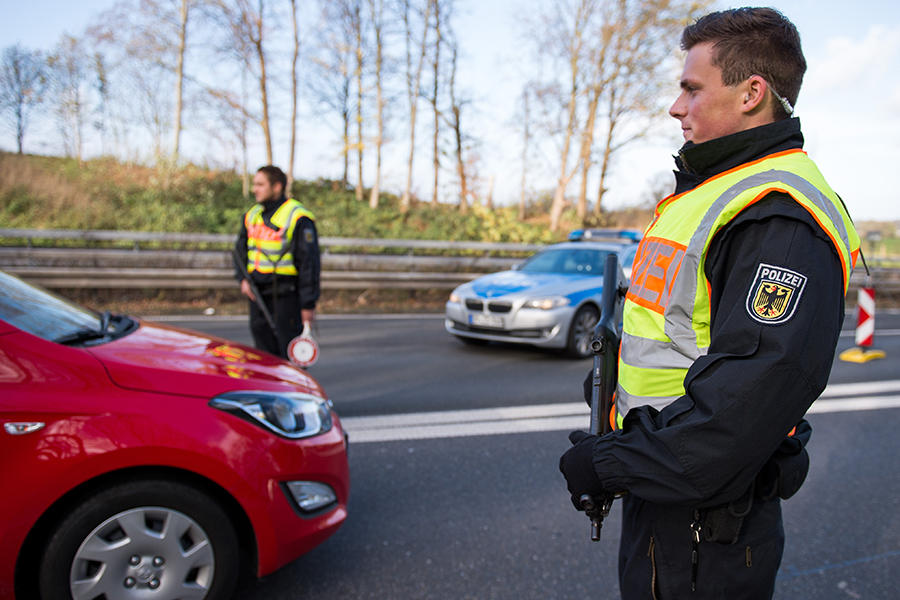 How would you describe the situation in France for instance?
S.R.: France doesn’t rank well in Europe. If we look at the degree of confidence given to the police, we are in the bottom third of the EU 27, and much closer to Greece and Bulgaria than to Germany or Denmark. Unsurprisingly, France suffers from the two weaknesses we have already mentioned: first, excessive targeting of minorities, particularly ethnic minorities, an issue which is less open to public debate than in Great Britain or the United States for example, and second, more authoritarian types of intervention. In this respect, it is interesting to compare France and Germany. The prevailing culture among police officers in France is one of confrontation (“ the police agent should prevail since he embodies the law)”, while their German counterparts communicate far more during interventions. For instance, if a French policeman wishes to check your papers or search you, he will do so without providing any explanation. A German policeman, however, will initiate a dialogue and avoid verbal conflict. This could be seen as a minor point, but it really changes everything! Furthermore, ethnic profiling is far less common in Germany than it is in France, and so confidence levels among the main minority group, which is Turkish and Muslim, are practically the same as among the rest of the population. In France, however, Muslims, practically all of whom are of North African origin, are checked massively, and they respond with a far higher level of defiance than average. In addition, in Germany the devoutness of Muslim adolescents increases confidence in the police, but in France, it has the opposite effect. Religiosity may thus either bring together or oppose believers and the police, depending on the national context. The effect of national context turns without doubt on secularization processes, the history of relations between state and religion, which are marked by great tension in France but not in Germany.

Can we use benchmarks to improve our own situation?
S.R.: Based on our study, for us it seems essential to limit and clearly circumscribe the use of police checks. Although the latter almost never reveal any lawbreaking and are ineffective in terms of security, they effectively poison relations between the police and the population. In addition, more structural reforms could be introduced. Scandinavian countries focus on improving respect for the police, and they have developed complex mechanisms of checking their representatives: there is far less tolerance of corruption and preferential treatment than in France, not only within the administration, and thus the police, but also within political and economic life. In return, these countries enjoy a high degree of confidence in their government and police force. The two go hand-in-hand: the more peaceful relations are between police and population, the more readily citizens acknowledge the legitimacy of their political system and vice versa. Finally, the divide between minority and majority populations remains an essential lever of trust in police. In 2014, a police officer killed a young African-American in Ferguson and our American colleagues who contributed to this study noted the change in public opinion. It was striking how the confidence of African-Americans in the police—which was already low—plummeted while that of whites remained at the same level. The removal of discrimination and ethnic-social cleavage appears essential if a certain level of confidence is to be restored. 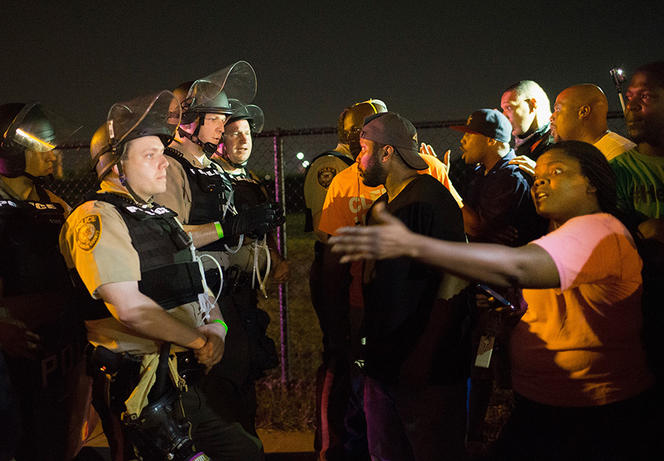 Demonstrators marking the one-year anniversary of the shooting of Michael Brown in Ferguson, Missouri (US). His death, on August 9, 2014, sparked months of sometimes violent protests in Ferguson and drew nationwide focus on police treatment of black suspects. 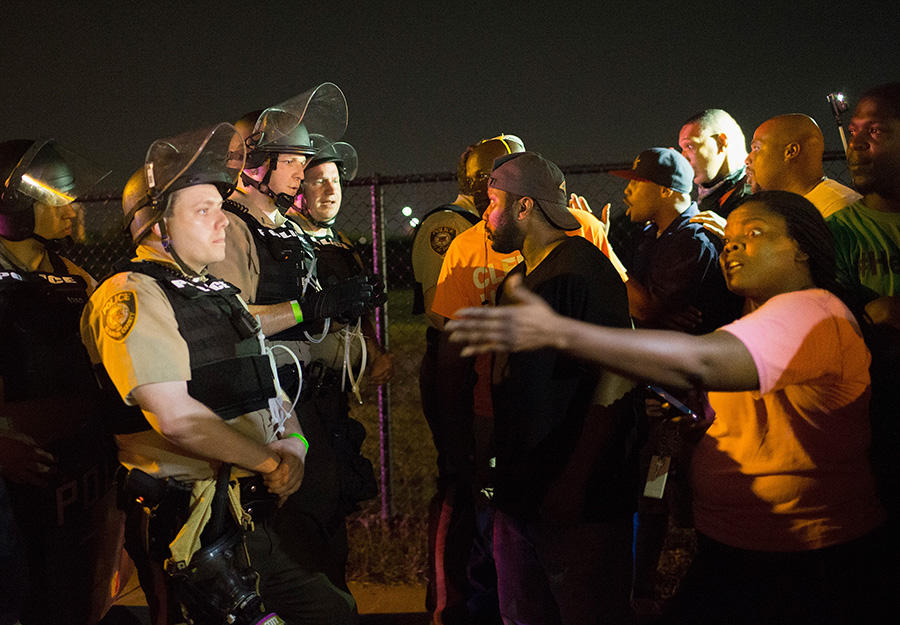 What is the situation in regimes torn by conflict? Does the population recognize the legitimacy of their police?
S.R.: Contrary to common belief, no society is viable without a minimum of adhesion to the regime on the part of the population. Extremely low levels of confidence do indeed exist in certain countries, such as Nigeria, for instance. The local population there believes the police to be extremely corrupt, as well as the government, particularly since, at its outset, the latter was a colonial invention designed to exert control over the native population while furthering the economic and political interests of Great Britain, all of which has left indelible marks. In most cases, strong cleavages are apparent along a sense of belonging to the various social or political groups. Turkey provides an interesting example: it is a “democrature,” (or a delegative democracy) in the sense that while elections are held, there is nevertheless a strong concentration of power and significant violation of the rights of opposition. In Turkey, the majority of the population (Sunnite) that supports the party in power trusts the police, while the minorities—mainly Kurds—exhibit marked defiance, which is associated with the armed conflict in the south-east of the country. Social, religious and political identities are key factors in determining levels of support for the police. One thing remains certain: the quality of a given government and its political institutions are closely correlated with the relations between its police force and its population. Our institutional system would be greatly improved by the development of further analytical tools of the police and through the promotion their transparency.

Article
US Elections: A Reset for American Politics?
Police

Article
Why Society Cannot Be Modeled