freshidea / Fotolia
Share
Share
By making it possible to "surgically" act on DNA, the CRISPR-Cas9 system is not only revolutionizing genome editing techniques, it is paving the way for new and exciting ways to study the brain.

CRISPR-Cas9. This barbaric acronym hides a revolutionary process: the modification of a gene or its replacement by another. However simple it may seem, this method is nevertheless the result of nearly thirty years of research. CRISPR-Cas9 (pronounced "crisper") operates like genetic scissors: it targets a specific region of the DNA, cuts it out and inserts a desired sequence in its place.

CRISPR-Cas9 is a complex made up of two elements: on the one hand, an RNA strand with a sequence that is homologous with the DNA to be excised, and on the other a nuclease enzymeFermerEnzyme capable of cleaving strands of DNA., Cas9. In the cell, the RNA strand will recognize the homologous sequence in the DNA and bind to it. The Cas9 enzyme then cuts out the DNA complementary to this RNA strand. The hole left by CRISPR-Cas9 can subsequently be filled by any new DNA fragment. 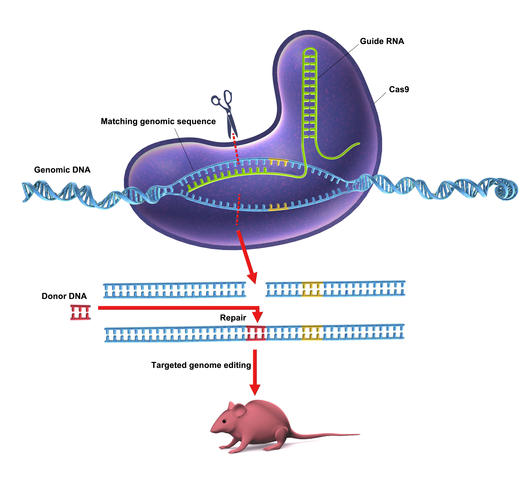 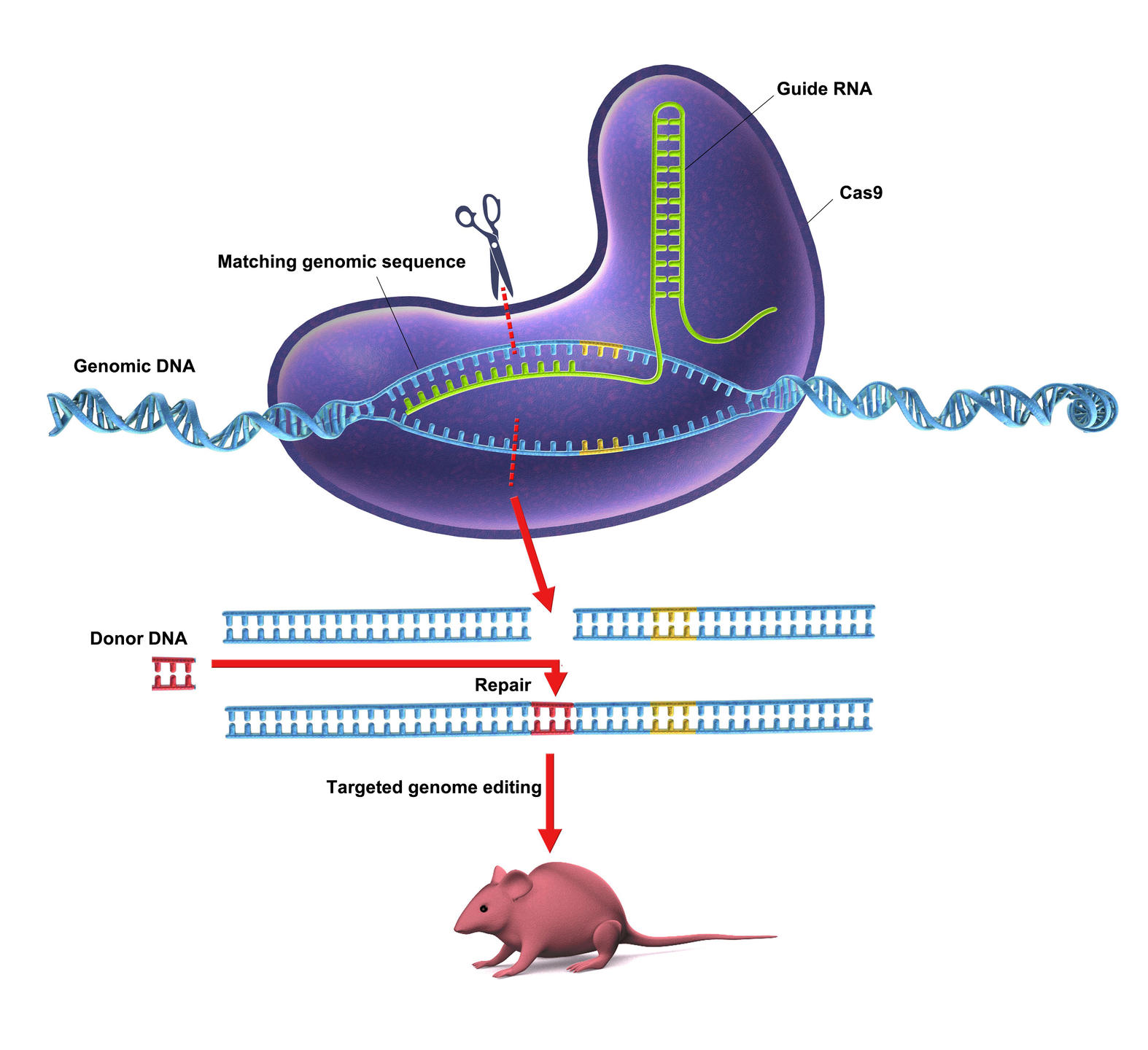 "This is a revolutionary technique and certainly the most important biotechnological innovation of the 21st century!," exclaims Jean-Stéphane Joly, senior researcher at the Institut des Neurosciences Paris-Saclay.1 If CRISPR-Cas9 causes such a stir among the scientific community, it is because it offers unlimited possibilities for genetic modification: deleting unhealthy genes, replacing them with a healthy sequence or even studying the exact function of a DNA strand, even at the molecular scale… No branch of biology will be left out, and new applications are being published every day.

From basic research to biotechnology

The origins of CRISPR-Cas9 date back to 1987, when a team of Japanese scientists working on the Escherichia coli bacterium discovered DNA whose base sequences (A, C, T, G) read the same way in both directions: they were palindromes, like the words "radar" or "kayak."

This is a revolutionary technique and certainly the most important biotechnological innovation of the 21st century.

The role of these fragments, called CRISPR, for "Clustered Regularly Interspaced Short Palindromic Repeats," was only revealed some twenty years later: firstly when it was observed that the DNA fragments located between the palindromes were of a viral type, and secondly when the bacteria carrying these sequences proved more resistant to infections. The RNA of a CRISPR-Cas9 complex thus allows it to recognize the viral DNA present in the bacterium and bind to it, before destroying it.

As early as 2012, the scientists Emmanuelle Charpentier and Jennifer Doudna drew inspiration from this bacterial immune reaction and were able to turn it into a true biotechnological tool accessible to all.

Deleting and replacing DNA to understand the logic of the brain

This has raised considerable hope, notably of elucidating the functioning of the brain. Indeed, the use of CRISPR expands fundamental research possibilities in the neurosciences: by removing a specific gene from an animal model, it is possible to determine its role more precisely; for example in the development of the brain. In addition, it opens the way to numerous therapeutic applications. For example, if a gene is incriminated in a mental illness, it may be possible in the future to eliminate, correct or replace it using this genetic scalpel. 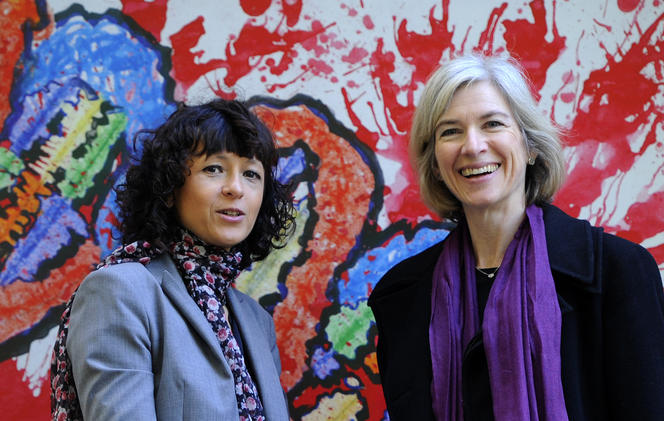 Emmanuelle Charpentier (left) and Jennifer Doudna (right) are the co-inventors of the genomic CRISPR-Cas9 editing technique. 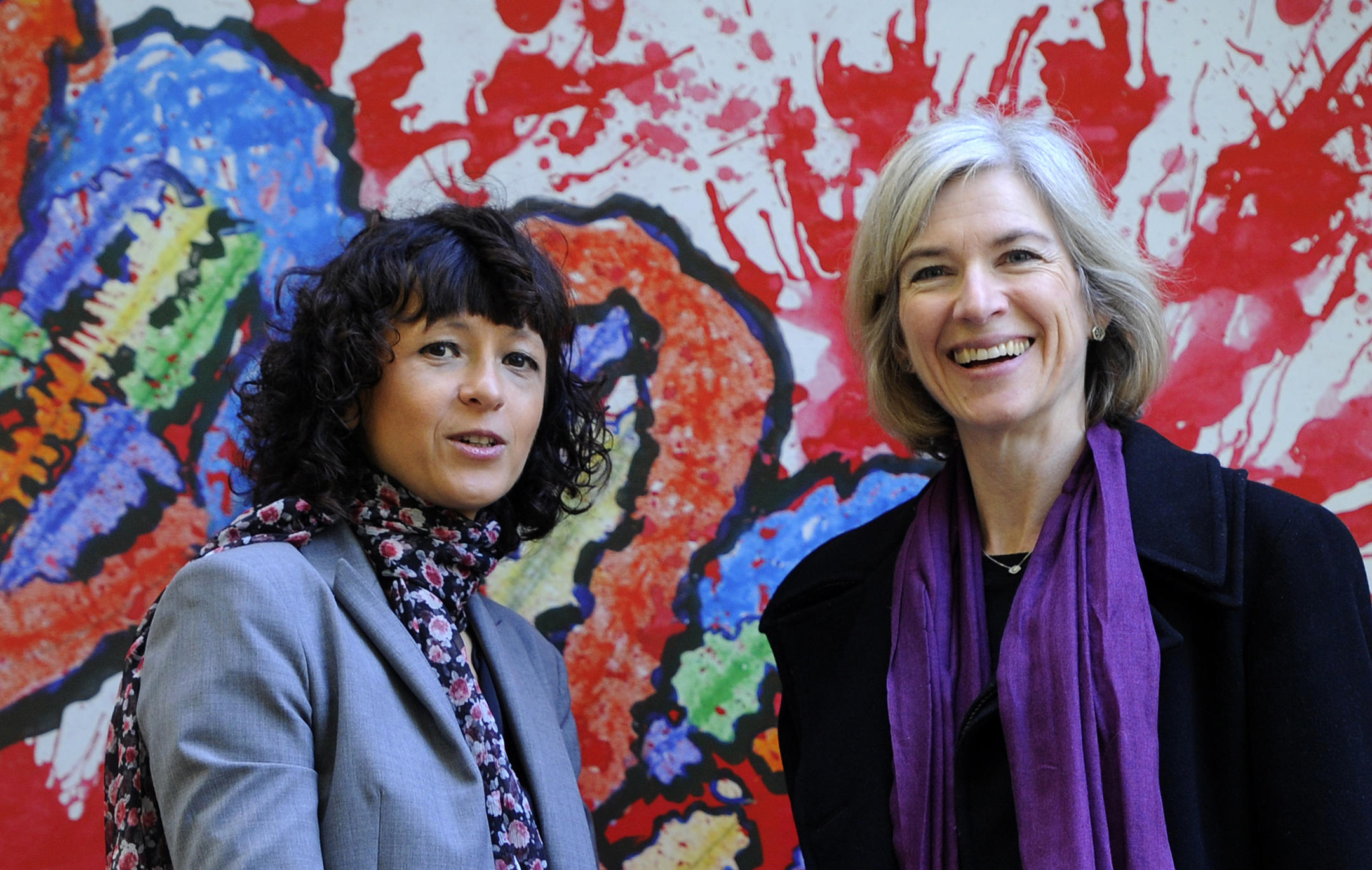 It is therefore no surprise that several neuroscience research projects are already using CRISPR.2 This is notably the case of Joly's work. "Thanks to genome editing, we can accurately characterize the mutations responsible for microcephaly in the zebrafish," he explains. This scientist is also coordinating the Network for Functional Studies in Model Organisms (EFOR), which among other techniques is using genome editing to compile the genetic and phenotypic map of numerous animal and plant models.

Whether it be brain tumors, neural development or autism, it becomes possible to establish the genetic profile of a plethora of brain conditions, just by removing simple DNA fragments. Particularly since they are often multigenic. For example, in the case of autism, more than 300 genetic variants have already been identified.  However, these variants are not all expressed in the same way at the level of individual neurons. Using CRISPR-Cas9, it will be possible to study these gene expressions at the local level.

Furthermore, genes that code for a protein are not the only part of DNA involved in the development of disorders. Between them lie sequences of regulatory DNA, which have long been considered as genetic "waste." Yet these non-coding parts play an essential role in numerous pathologies. In the future, CRISPR-Cas9 may help to better characterize the role of these fragments, which is still largely unknown.

A simple, rapid and inexpensive technique

Although CRISPR-Cas9 is a revolutionary step, other genome editing techniques existed before it. Frédéric Causeret, a neuroscience researcher,3 previously applied them to mice, notably to study their brain development. Nevertheless, he is now considering using CRISPR-Cas9 in the coming months. "We already have homologous recombination to modify the mouse genome, but CRISPR is much quicker!," he explains.

While it took almost a year with the previous technique to obtain a mouse with the desired mutation, CRISPR can achieve these modifications in just two months. And it is less expensive! In total, the procedure costs a few thousand euros, while some mutant mice may be worth up to €50,000.

CRISPR-Cas9 is the iPhone of biotechnology.

"The technique is very simple to implement and saves us some complicated steps," says Causeret.

CRISPR-Cas9 has inspired the wildest dreams, notably because it can delete and replace several genes at the same time, unlike other gene editing techniques. "We shall be able to generate models of multigenic brain pathologies both simply and rapidly," predicts Causeret. Some research projects using CRISPR-Cas9 have even managed to modulate the expression of a specific gene, without having to edit it.

Genome editing for all!

"CRISPR will not change our routines, but it opens perspectives that we did not even consider, because they took too long," Causeret points out. Indeed, the technique can cause extremely rapid loss of gene function in numerous lineages, or trace any protein in the brain. According to Joly, this breakthrough will revolutionize biology in the same way as the gene amplification technique PCR did in molecular biology and genome analysis some thirty years ago. "CRISPR-Cas9 is the iPhone of biotechnology," he smiles, explaining that hundreds of new patents are likely to be filed in the coming years. 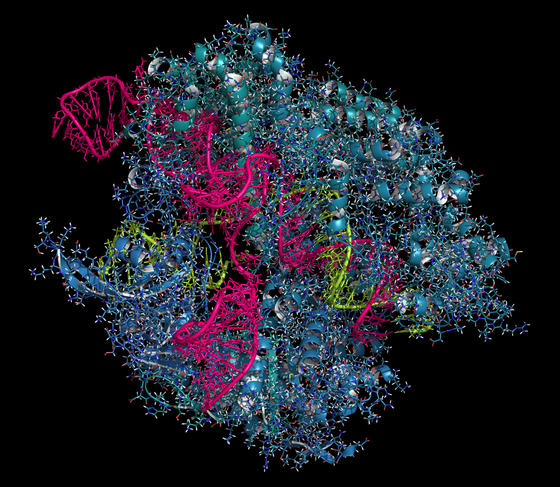 Molecular representation of the CRISPR-Cas9 complex in the Streptococcus pyogenes bacterium. 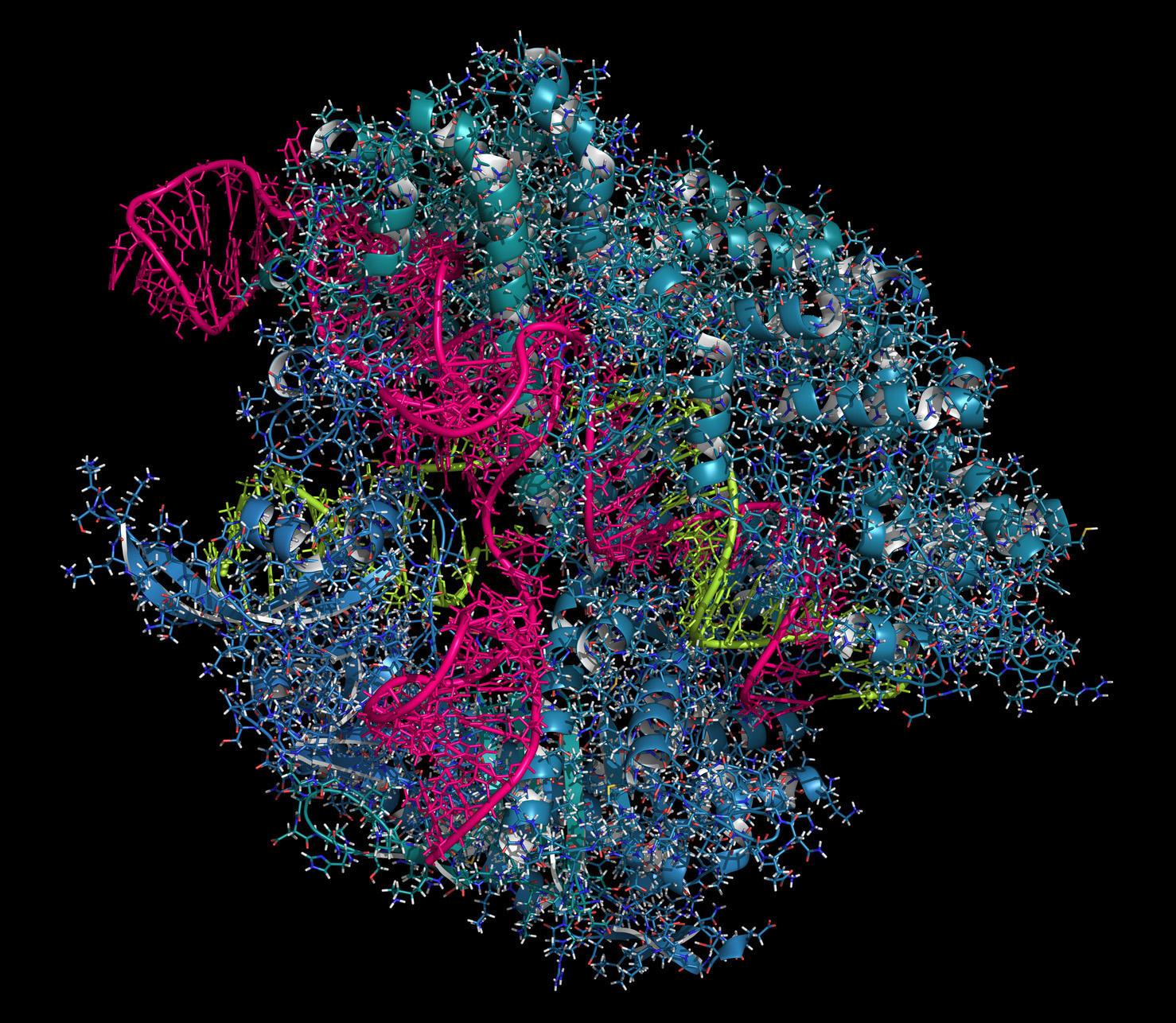 While a handful of years ago, genome editing was only available for mice, CRISPR-Cas9 now makes it possible to edit the genome of all living beings: zebrafish, primates, social insects, etc. But although this research is expanding, it is early days to extrapolate its results to humans.

What prevents its application in humans?

First of all, envisaging therapeutic applications for CRISPR-Cas9 raises the issue of its mode of administration.  While injecting the mixture into the nucleus is sufficient in vitro, this remains arduous in vivo in particular when it comes to deliver it to the brain. "In the mouse, we transfer the genetic material to the embryo in utero, using the so-called electroporation technique," explains Causeret.

For certain neurodegenerative diseases, we might be able to envisage genome editing before the onset of the first symptoms.

But this method may be difficult to apply in humans. The route of entry for CRISPR could therefore be a viral vector, in the same way as conventional gene therapies. Finally, injection of the genetic material may also be posterior to the embryonic stage. "In the context of certain neurodegenerative diseases, for example, we might be able to envisage genome editing in an adult before the onset of the first symptoms," Causeret believes.

Ethical and safety issues nevertheless predominate in the case of human use. The risks that CRISPR will miss their target are low, but they exist. "It would be enough for CRISPR-Cas9 to modify a sequence that closely resembles what we are targeting to trigger a disaster. It would be the same as removing a tumor suppressor gene, for example," the researcher says.

Agronomy, ecology, neurology… The applications of CRISPR seem limitless. "Some people even think that genome editing could be used to sterilize mosquitoes and thus eradicate malaria—or prevent potatoes from turning black," Joly points out, adding that these genetic modifications and their effects on the environment need to be strictly controlled. One thing is certain, CRISPR-Cas9 has not revealed the full extent of its applications, to say the least. "It is quite obvious that advances on rewriting the genome deserve a Nobel Prize," Joly enthuses.

Article
A New Diet to Slow Down Alzheimer’s Disease?
Genome