Science Photo Library / Tek Image
Share
Share
French scientists have set up a multidisciplinary, large-scale virtual screening project that should enable them, during the next 18 months, to look at 1.5 billion small molecules in order to identify candidate compounds that are likely to inhibit the SARS-CoV-2 virus.

To find new molecules active on SARS-CoV-2, a network of chemists, biophysicists, biologists, computer scientists and physicians has been set up in just one week. Their aim is to virtually screen 1.5 billion compounds, or in other words test them using artificial intelligence. “Our ‘virtual’ approach differs from other initiatives in that it couples an ultra-large screening scale with the knowledge of the virus held by biologists and physicians. It will therefore make it possible to synthesise, purify and test potential candidates ‘for real’,” explains Jean-Hugues Renault, a specialist in the chemistry of natural substances at the Reims Institute of Molecular Chemistry (ICMR)1 and leader of the project.

It all started with a series of phone calls. Following discussions and email exchanges far into the night, Jean-Hugues Renault, who is also the director of the ICMR, based in northeast France, set up a virtual, ultra-large screening project in only seven days and submitted it to the French National Research Agency… ten minutes before the deadline for responding to the call for proposals expired! In his opinion, this is the first submission to have been achieved in such record time. The HT-Covid project2 involves six research laboratories,3 a University Hospital (CHU)4 and several major research infrastructures,5 which include the CNRS ChemBioFrance platform dedicated to high-throughput screening. Above all, three French computing centres6 have made available up to 115,000 processors and 1.5 petabytes (or 1.5 million gigabytes) of storage.

This is also the first time that most of the protagonists are working together. The CNRS is funding part of the project, alongside France’s northeastern Grand Est region. Several hundreds of millions of compounds have already been screened.

The stakes are high in the fight against the pandemic. “There are three options if we are to defeat SARS-Cov-2: find a vaccine, search in the existing pharmacopoeia or produce new compounds that exhibit antiviral activity. It is in this third approach that our ultra-large virtual screening comes into play,” explains Jean-Hugues Renault. But what is virtual screening? “Using IT assisted by artificial intelligence, we can test a huge number of natural or synthetic compounds. We identify those that display interesting biological activity; for example, to inhibit the replication of SARS-CoV-2. It is clear that, at this stage, the contributions of our colleagues, whether biologists or physicians, are essential,” explains the scientist. 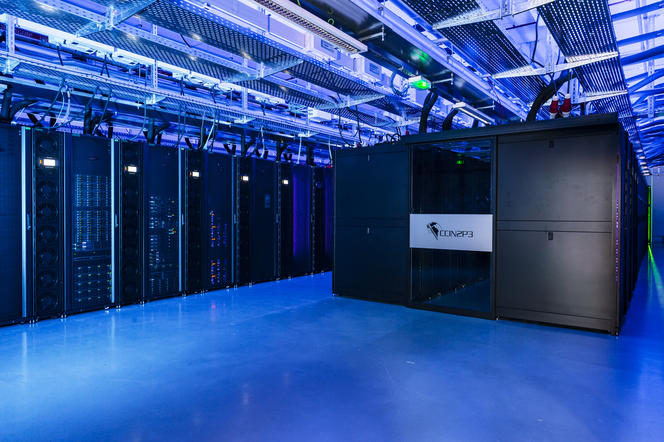 The second computer room at the IN2P3 Computing Centre. This Centre, and two others, are making their processors available to the HT-Covid project to enable rapid simulation of the activity of candidate compounds on viral proteins. 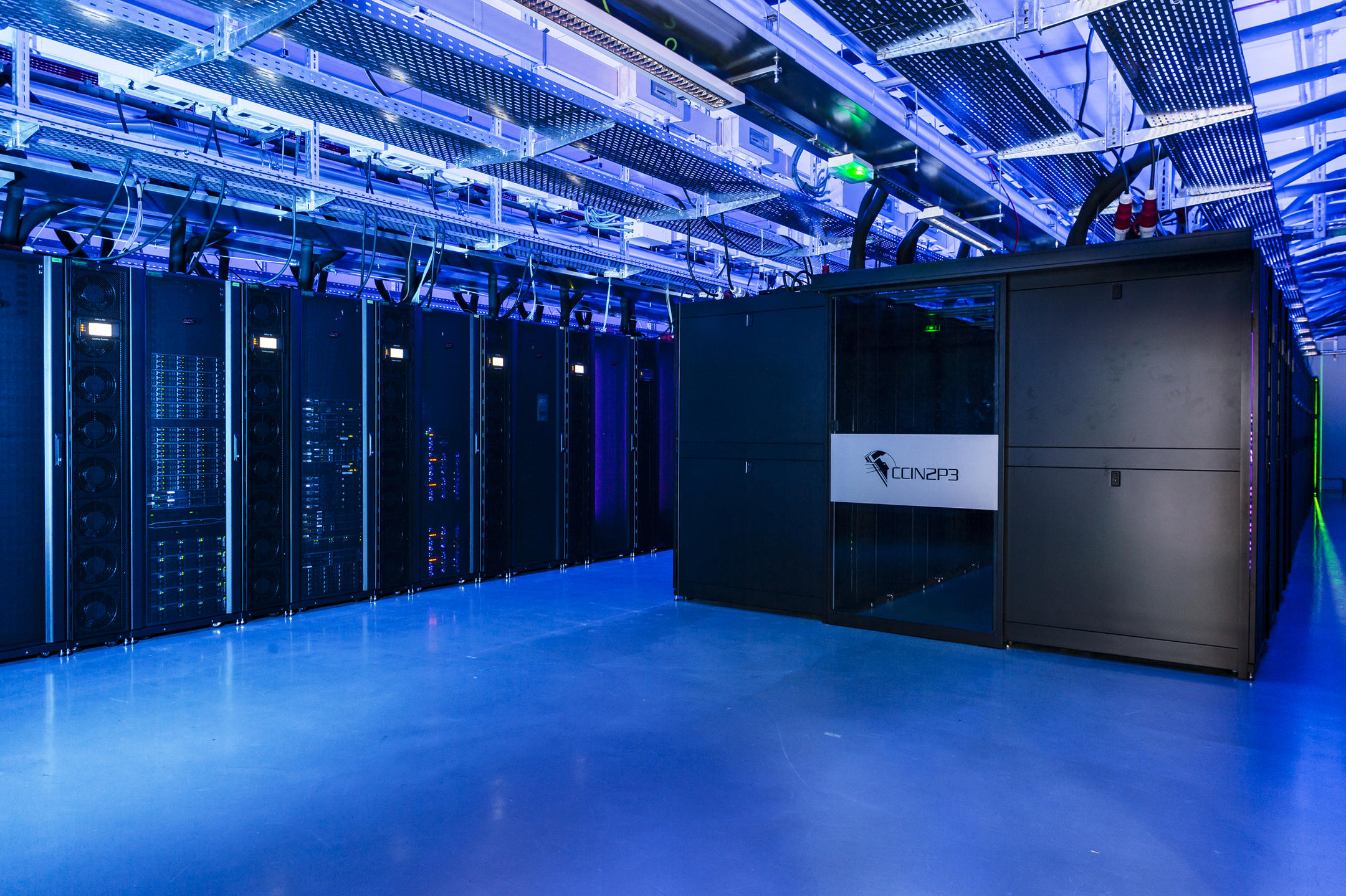 The second computer room at the IN2P3 Computing Centre. This Centre, and two others, are making their processors available to the HT-Covid project to enable rapid simulation of the activity of candidate compounds on viral proteins.
C. FRESILLON / CC IN2P3 / CNRS Photothèque
C. FRESILLON / CC IN2P3 / CNRS Photothèque
Share
Share

Considerable computing power enables rapid simulation of the activity that a molecule might exert on one or other of the proteins in a virus. It is as if part of the lengthy and costly process of identifying candidate drugs has been subcontracted to 115,000 processors. As well as the massive computing power deployed, the HT-Covid project is novel in its dual approach of virtual screening that can explore an extremely broad “chemical space”. On the one hand, 70,000 existing compounds listed in databases or libraries such as the French National Chemical Library can be tested in silico (or in other words using a computer) on several known and relevant protein targets in the virus. Jean-Hugues Renault welcomes the fact that “each week, new information on the structure of the virus is being published, as there is so much research at present in this area”.

Secondly, and in parallel, ultra-large virtual screening is being conducted on a single target, one of the most interesting in the virus: 1.5 billion molecular structures, designed by artificial intelligence and rapidly synthesised by robots, are being tested on the RNA replicase that triggers replication of the virus. A cross-over study of the results of the two approaches should produce a selection of five hundred candidates for the next stage, which is a switch towards the real world, or the production of these compounds and their biological evaluation. 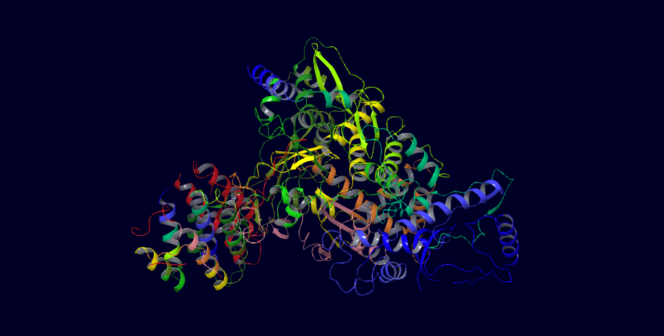 This RNA replicase, or RNA-dependent RNA polymerase, is at the origin of viral replication; it will be the subject of virtual testing with 1.5 billion molecular structures designed using artificial intelligence. 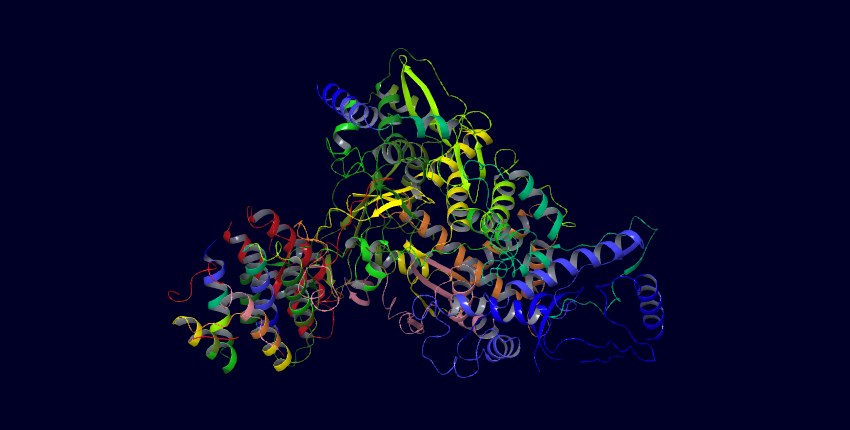 This RNA replicase, or RNA-dependent RNA polymerase, is at the origin of viral replication; it will be the subject of virtual testing with 1.5 billion molecular structures designed using artificial intelligence.
JH Renault
JH Renault
Share
Share

Following screening, some of the molecular structures identified may already be available on the market or in chemical libraries. If not, it will be necessary to synthesise and purify them before they undergo the stages of in vitro and in vivo trials. According to Jean-Hugues Renault, “there will not necessarily be a miracle within 18 months; this is an interdisciplinary approach that includes certain aspects of fundamental research”.

However, this novel methodology is an excellent complement to the academic or industrial efforts being made, and above all it could be transposed in an identical manner to other pandemics. “Such resources would not be accessible under normal conditions. What is absolutely remarkable is that in the event of an emergency, and in very little time, exceptional mobilisation and reactivity can be achieved. The agreements from the IN2P3 Computing Centre, GENCI, and the ROMEO supercomputer to make their computing power available were both immediate and decisive.” Each of these centres have temporarily set aside some of their experiments to concentrate on the fight against Covid-19.
Another important aspect of the project is open data. The information generated by the HT-Covid project could be put in open access. This is also a means of demonstrating that emerging from this crisis will offer an opportunity to drive changes to practices, even within the research community.

See author's bio
The Environmental Crisis Is far more Urgent TodayPrevious
Virology: Between a Marathon and a Race against TimeNext

Article
Biomechanics off to a flying start in BMX racing
Chemistry