Home / Articles / Could the Future of Democracy be Digital?

Could the Future of Democracy be Digital?

Home / Articles / Could the Future of Democracy be Digital?

Could the Future of Democracy be Digital?

The Estonian general election is the only parliamentary poll in the world with an online option. To vote, users need to download special software and log onto a secure site with an encoded ID card.
R. PAJULA/AFP PHOTO
Share
Share
For all elections, Estonians can now choose between conventional or e-voting. In 2013, 21% of the electorate voted online. So why do other European countries—including France—whose elections are plagued by record abstention rates trail behind?

Voters sit in front of their computers, log onto an official government site, enter a user ID and a password, click on the candidate of their choice and validate their selection. Their votes are cast! According to a survey conducted by Harris Interactive for the French daily Le Parisien in late October 2015, 56% of the French people surveyed would like to be able to vote on the Internet, without having to travel to a polling station. Even more interestingly, 58% of those who abstained in the previous elections indicated that they would vote if they could do so on the Net—a figure that rises to 79% for the 18-25 age group. At a time when abstention has become a genuine problem, many leaders, whatever their political affiliation, reacted to this study by urging the adoption of such a system. Yet is it technically feasible? And is online voting as reliable as the physical ballot box?

“For the time being, the answer is no,”  says Véronique Cortier, a researcher at LORIA.1 A recent laureate of the INRIA-Académie des Sciences young researcher prize, she is developing an e-voting software program called Belenios together with her team, which notably includes Stéphane Glondu and Pierrick Gaudry. “Many obstacles still have to be overcome,” Cortier reports. “They stem from two essential, albeit seemingly contradictory, aspects of any political election: the secret ballot, which guarantees that voters' choices are strictly anonymous, and verifiability, which assures them that their votes have indeed been taken into account.”

Belenios, a free and open-source software

In the traditional voting process, both of these conditions are met. Inside the booth, voters put their ballot in an envelope and then, in the presence of an official, drop it into a transparent ballot box. Secrecy is thus preserved, and verifiability is ensured: voters can, if they so wish, stay in the room until the counting process is completed.

"The software programs developed by private companies mostly focus on confidentiality, set as a pre-requisite by the CNIL,2 France’s data protection watchdog," Cortier continues. "But they don’t provide sufficient transparency: the way these systems operate is confidential, and voters cannot personally verify the counting process.”

Belenios, the program under development at LORIA, is an improvement on Helios, an open-source program designed by Ben Adida at Harvard University in 2008. Helios was used successfully in 2009 to elect the president of the University of Leuven (Belgium) and, since 2010, the directors of the International Association for Cryptologic Research. Like Helios, Belenios is an open-source program: anyone who has the necessary skills can access its code and understand its mode of operation.

Multiplying safeguards for a better count

“As with any poll, an electronic election comprises a voting phase, followed by a counting phase," the researcher continues. "Voters identify themselves and select the candidates of their choice. The ballot is then encrypted using a public key and sent to a server. On their computer screens, voters see their ballot go into a virtual box containing all the other encrypted votes.”

In order to secure the confidentiality of the counting process, the results are tallied without decrypting the ballots. “Belenios uses El Gamal-type encryption, which has a very interesting homomorphic property: the election results can be obtained directly by combining all of the ballots. Yet these results themselves are encrypted, and must be decrypted before being made public,” Cortier explains. 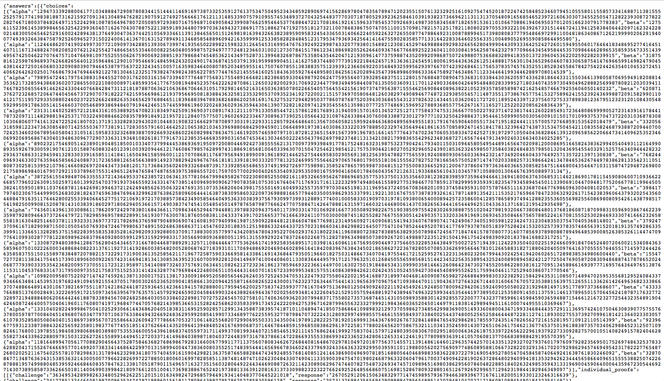 The encrypted data of the Belenios software during online voting. 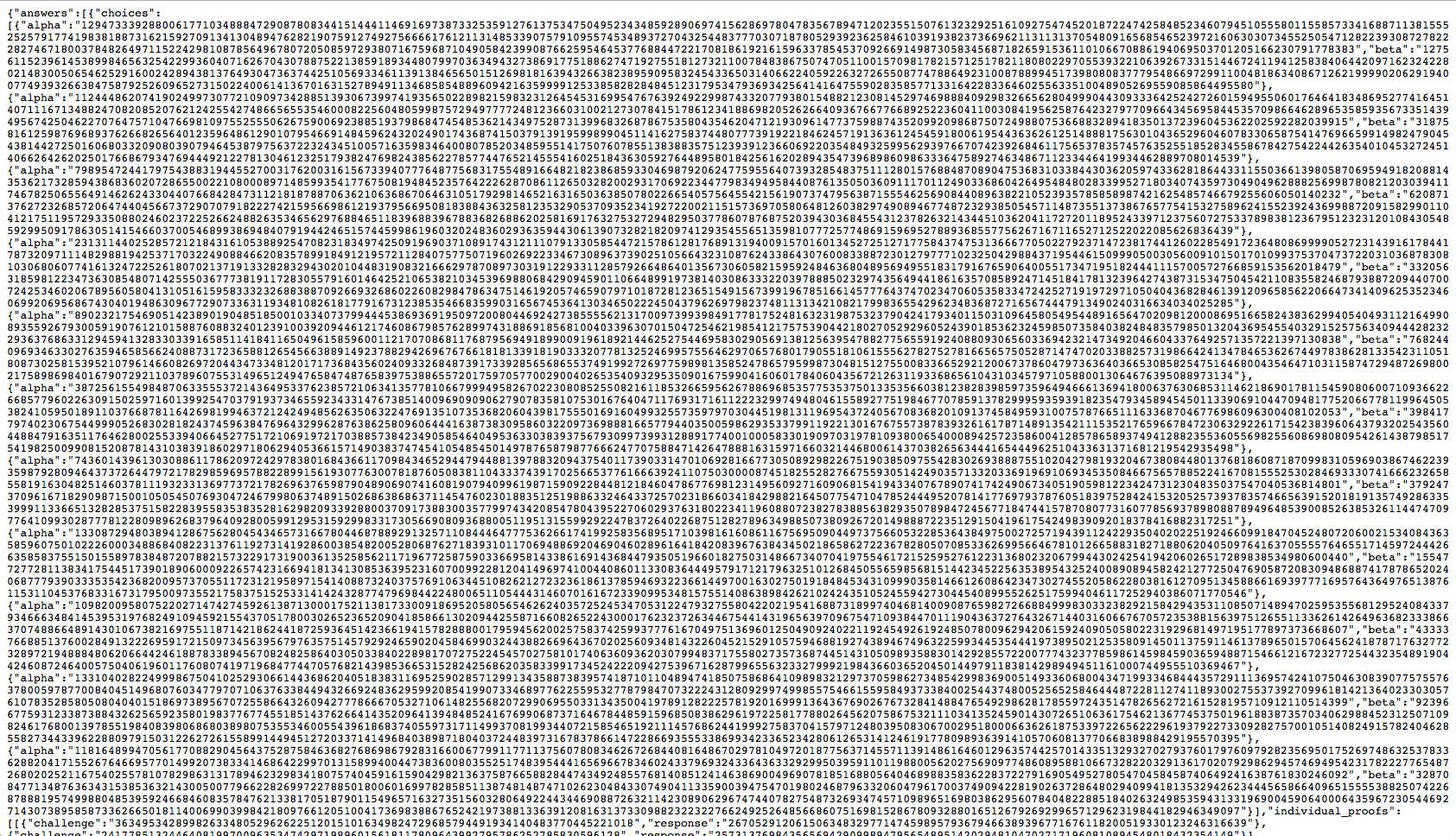 To do so, the election supervisors each have a part of a private key. All of these fragments must be combined to decrypt the vote count. In this way, no single supervisor can access—or modify—the election results.

Reducing the risk of “vote rigging”

To minimize the risk of election fraud, the LORIA team has incorporated multiple protection systems. “Each voter has a single-use voting token with which to 'sign' their vote—and everyone can verify that all the ballots in the box are valid," Cortier explains. "Any attempt to attack the server to stuff the ballot box would be detected immediately.”

Any attempt to attack the server to stuff the ballot box would be detected immediately.

What if a hacker manages to intercept an encrypted ballot before it reaches the box? Since the encryption key is the same for everyone, hackers could infer the content of a ballot by comparing it with others encrypted on their own computers, thus violating the principle of the secret ballot. To avoid this, the voter’s computer generates a random number that is used in the encryption process, before the "bulletin" is transmitted. In this way, a single person’s vote issued at different times would produce different encrypted ballots.

“Still, the system is not perfect,” Cortier warns. “For example, no one should be forced to vote in a certain way. In polling stations, the voter is alone in the booth. But remote Internet voting makes it impossible to ensure that voters are on their own and that their choice has not been influenced or dictated. Nor does it guarantee that their computers are not infected with a virus that can modify the ballot before it is sent.”

Will these drawbacks prevent the adoption of online voting in France? In fact, e-voting has already been tried in two different forms. A Law passed in 2003 defined the terms for the approval of electronic voting machines, which are used in polling stations to replace the voting booth and ballot box. For the 2007 presidential election, these machines were available in 93 French towns3 representing a total of 1.5 million voters, or 3% of the electorate. Yet the first round of that election was plagued by technical problems and legal issues, for example when two machines were installed in each polling station in the city of Reims to shorten the wait.4 As a result, a moratorium was declared, preventing other municipalities from adopting the system. 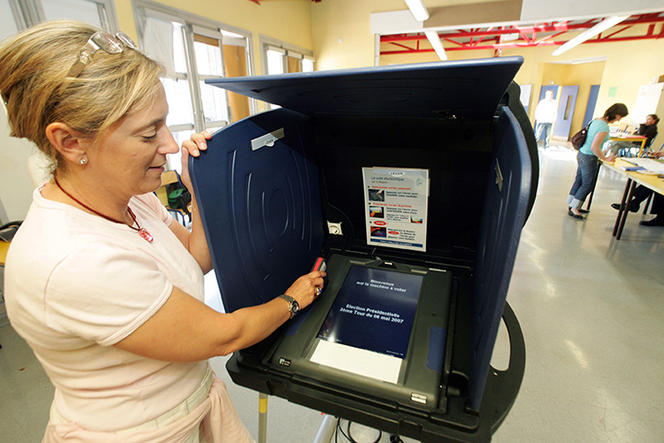 For the first round of the French presidential election of 2007, some 3 million voters were given the option to use electronic voting machines at their polling stations. 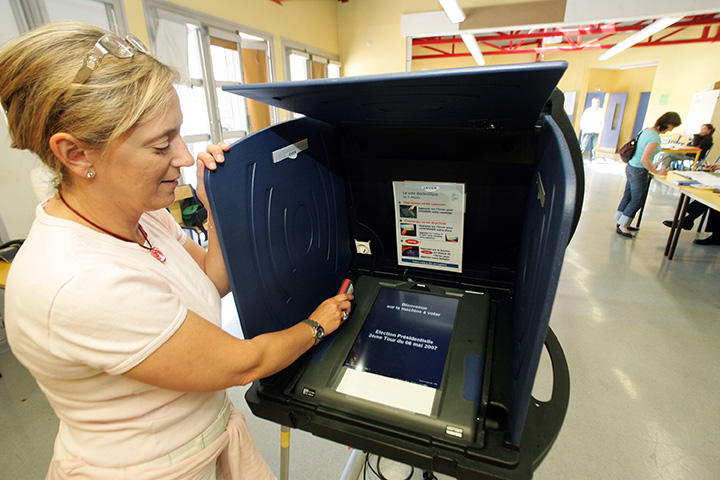 Electronic polling was also authorized in the 2012 legislative poll and the 2014 European Parliament elections, for which French citizens residing in other countries were given three choices: voting by regular ballot at the nearest consulate, by post using a paper bulletin, or on the Internet. Half of the absentee ballots in the legislative poll were cast online. Yet, contrary to expectations, this had no significant effect on the overall turnout. In a 2014 report on e-voting in France, senators Alain Anziani and Antoine Lefèvre expressed serious doubts about its viability. Given the lack of transparency in the functioning of voting machines, they requested that the above-mentioned moratorium be maintained. And the drawbacks of Internet voting prompted them to oppose its nationwide extension, while supporting its continued use for French citizens abroad (voting by post, the other option for those who live far from a consulate, is even less secure than voting online).

According to the two senators, the results of e-voting experiments elsewhere in Europe are equally inconclusive. Only Switzerland and Estonia remain committed to developing Internet voting. The Baltic republic, nicknamed “e-Estonia,” has been investing heavily and for a long time in electronic services for its citizens, including e-identity cards, tax returns, police protection, health services, schools and, of course, ballots. For all elections, Estonians can now choose between conventional or e-voting. In 2013, 21% of the electorate voted online. 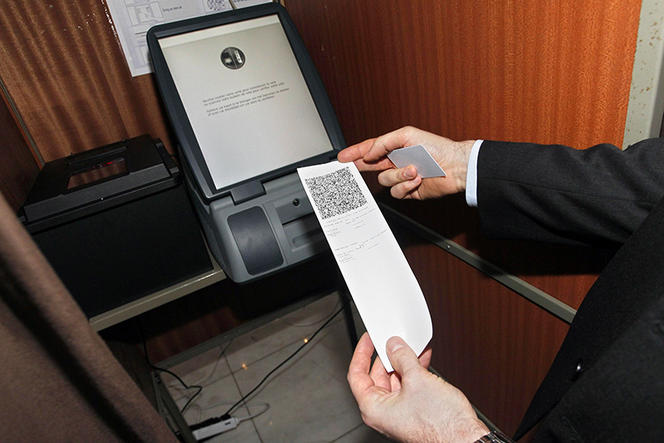 Some 10,000 people in Flanders and Brussels tested a new electronic voting system in 2011. After casting a ballot, individuals are given a receipt (pictured here). 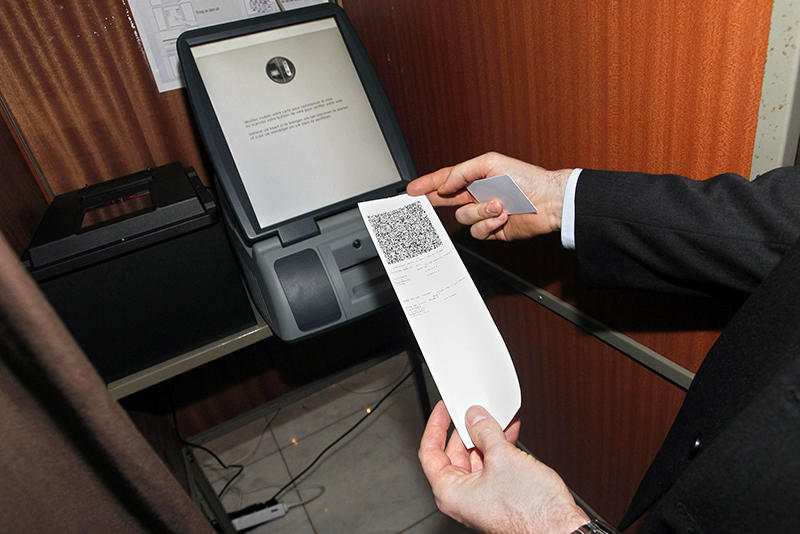 In all other European countries, electronic voting either stalls or loses ground. Ireland discontinued its program in 2004, due to the unreliability of voting machines. In Germany, the Federal Constitutional Court declared them contrary to the law, as citizens are unable to verify their accuracy. In the Netherlands, Internet voting was abandoned in 2008 for lack of confidence in the results. The same thing happened in the UK, where e-polling was tested in the municipal elections of 2002 and 2007.

“While voting on the Internet is not as reliable as casting a ballot in a box, it still has a bright future—albeit not for major political elections,” Cortier says. In France, the 268,000 UMP party activists were asked to elect their president on the Net in November 2014. One month later, the country's National Education employees elected their representatives online, and in December 2015 the students of the Paris-based National Institute for Oriental Languages and Civilizations (INALCO) will choose theirs by e-ballot.

“By the end of 2016, Belenios will be fully operational and accessible,” the researcher concludes. “By logging onto a dedicated server, municipalities, NGOs, employee works councils and any group wishing to hold online elections will be able to do so freely and free of charge.” Soon, we will al be able to form our own opinion of “democracy 2.0.” Pending the day, perhaps, when we choose the country’s president from the privacy of our homes.