Home / Articles / “Come on, you Reds!” They Shouted in Ancient Games

“Come on, you Reds!” They Shouted in Ancient Games

Home / Articles / “Come on, you Reds!” They Shouted in Ancient Games

“Come on, you Reds!” They Shouted in Ancient Games

An Auriga (charioteer). In classical antiquity, there were far fewer disciplines than in the current Olympic Games: horse racing and athletic events for the most part, with no collective sports.
BEBA/AISA / Bridgeman Images
Share
Share
As the Rio Olympics are about to begin, historian Jean-Paul Thuillier discusses the origins of the modern Olympic Games in ancient Greece and Rome.

Is it true to say that the current Olympic Games were invented in ancient Greece?
Jean-Paul Thuillier:1 That is what their name suggests, but they have practically nothing in common with the “contests” (Greek: agones) or “gatherings” first held in Olympia in the 8th century BC. When Pierre de Coubertin invented the modern games between 1894 and 1896, the idea was to make sport more democratic by placing it on the international stage. In ancient times however, the notions of amateur sport and nation states simply did not exist. In addition to this crucial point, there were far fewer disciplines, just horse races and athletic contests for the most part, and no team sports. The ancient Greeks occasionally played ball games, but never within actual Olympic competitions. Finally, it must be pointed out that these games were dedicated to the gods and formed part of an entire series of ritual events such as processions, prayers, sacrifices and so on, which is obviously no longer the case today. In reality, we are talking about two completely different situations. The fact that the first modern games were held in Athens rather than Olympia strikes me as significant. In 2004, the organizing committee arranged for the shot-put event to be held in the Olympia Stadium as a symbolic gesture, which I find amusing as this sport did not exist in antiquity! 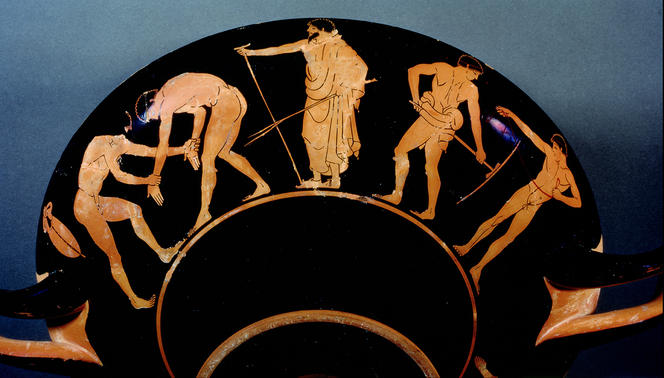 Greek athletes training (5th century BC). From the 4th century BC and under the Roman Empire, "contests" flourished around the Mediterranean: in Turkey, Tunisia, Egypt, Italy... 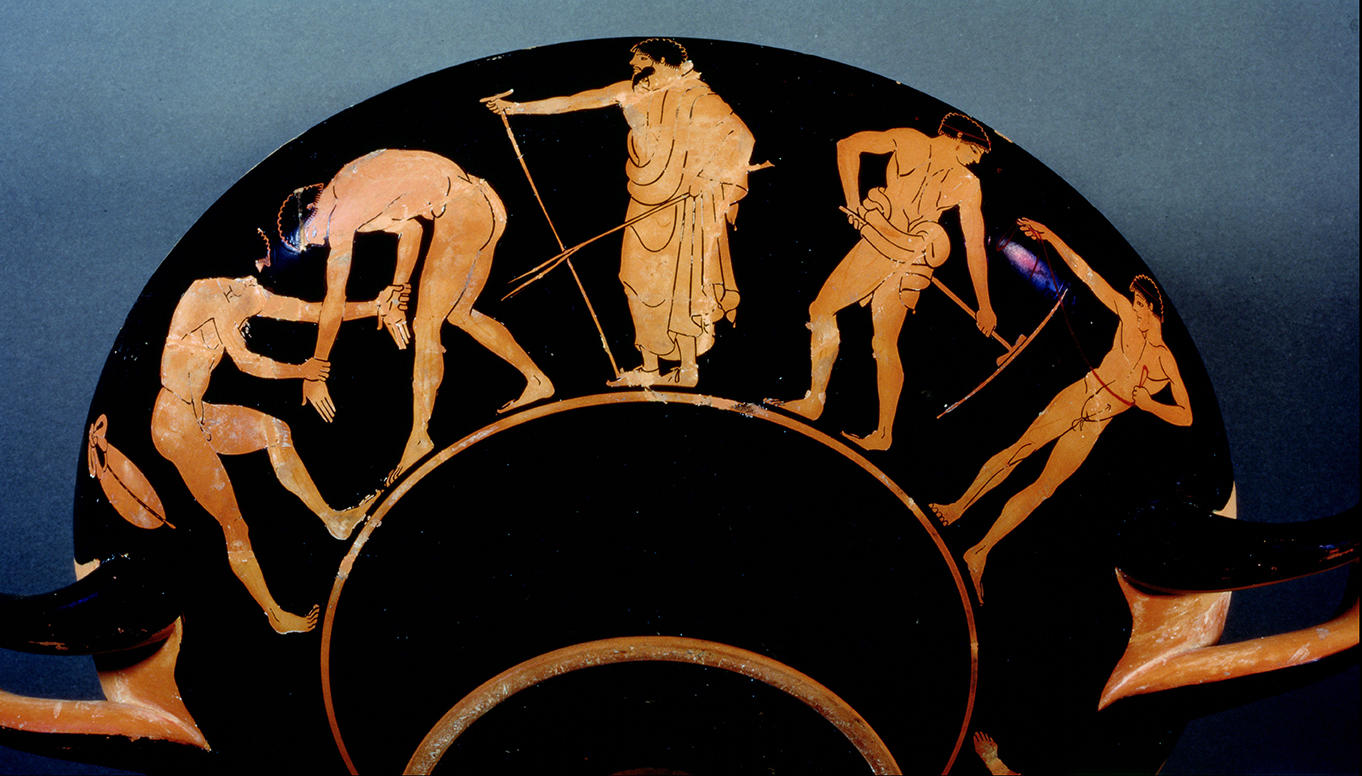 Were other similar competitions held in the rest of the ancient world?
J.-P. T.: Contrary to popular belief, sport was not created in Greece and there is indeed evidence of older sporting activities among the Egyptian and Sumerian civilizations for example. However, it is true that sport took on a considerable and relatively unprecedented importance in the Greek world. “Gymnastics,” in other words physical education at a gymnasium, formed part of the standard training of the elite class of the day, on a par with intellectual education. Furthermore, the contests held in Olympia became the largest public spectacles to take place in Greece, with 50,000 spectators making the journey to attend, a considerable figure for the era.

The contests held in Olympia became the largest public spectacles to take place in Greece.

Beginning in the 4th and 3rd centuries BC, under the Roman Empire, games began to spring up around the Mediterranean basin in Turkey, Tunisia, Egypt, and Italy for example. And it was the Roman world, I believe, that ushered in what we now call “spectator sports.” The famous circus games—which, I hasten to add, did not include gladiator combats—drew up to 150,000 spectators. This was the largest sporting event until very recently: Rio’s Maracanã Stadium, built in 1950 for the Brazil World Cup, broke the world record with a capacity of 200,000 spectators, but this was later reduced to a more modest size.

How did the Roman games differ from the Greek Olympics?
J.-P. T.: Greek athletes were aristocrats motivated chiefly by desire for victory and the prospect of being covered in glory. A champion athlete enjoyed the same esteem as a military leader who had saved his country. However, the only prize received at Olympia was an olive-leaf crown, which might be supplemented by material goods or money when champions returned to their home town. In Rome, however, things were completely different: aristocrats never lowered themselves to take part in spectacles, which was regarded as ignominious. Participants in the games were thus people of lowly status, often slaves, who hoped thereby to earn money, improve their condition or to win their freedom. The greatest champions of the major event, chariot racing, earned immense fortunes: we know for example that a charioteer named Diocles earned 35 million sesterces at a time when the minimum fortune needed to qualify as a Roman senator—the highest public office at the time—was a “mere” one million sesterces. This led to the first major debates about “sport business” and the earnings of champions: intellectuals like Juvenal and Martial found the situation scandalous and denounced this “abuse” in their poems.

So there was less money involved in Greece than in Rome?
J.-P. T.: In many respects, chariot racing in the Roman circuses was the equivalent of football today: charioteers could earn considerable fortunes and enjoyed levels of popularity unparalleled in antiquity.

Chariot racing in the Roman circuses was the equivalent of football today.

The other circus games—mainly combat sports and athletics—were nowhere near as popular. In Greece, horseracing was the exclusive province of the elite and the richest echelons of society, and thus far less money was involved. The rise of professional sportsmen began in the 4th century BC at the earliest: competitions multiplied throughout the Mediterranean world with ever-greater financial rewards on offer. Some athletes were thus able to make a living by moving around from one competition to another. However, this was a late development and occurred on the outer fringes of what we call the “Panhellenic games.”

Did these events have any political or social function?
J.-P. T.: Yes, first because they attracted huge crowds. In Greece, some people traveled to the sanctuary of Olympus in the same way as others would later undertake pilgrimages to Mecca. Many came to attend the spectacle and take part in the event, but these were not the sole reasons. The games were also a meeting place and provided an opportunity for politicians, orators and philosophers to meet one another and exchange opinions. In Rome, especially during the Republican era, the Games represented an instrument of power. The magistrates overseeing the games—the “Aediles”—were assured of a prosperous political career in return for staging sumptuous events. The games were also a source of immense prestige for the Emperor himself, a situation once again denounced by the writer Juvenal, who in one of his Satires deplored the fact that “All Rome is in the Circus today.” The popularity of the games meant that the streets were deserted during the chariot races, giving thieves free rein. The supporters in the stands were impassioned and argued incessantly about who was the best driver. In one scene in the Satyricon, Petronius has a master discussing this question heatedly with his own servants. Such debate ensured exchanges between people from extremely divergent backgrounds and was thus the source of a certain degree of social cohesion. 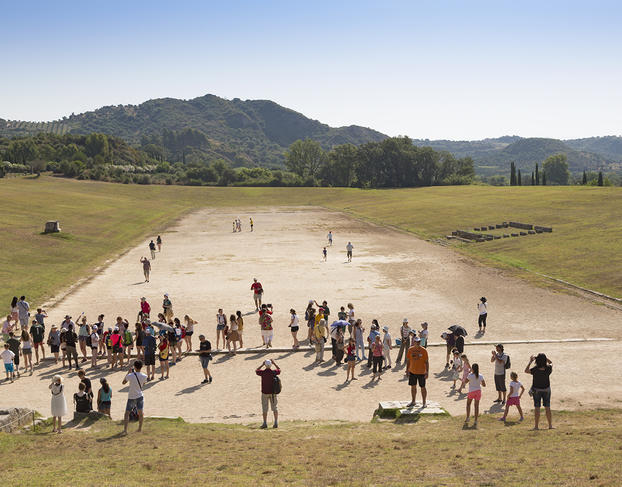 The stadium of Olympia (192 meters long) and its start line. For almost a thousand years, athletes from all over Greece came there to test their skills. 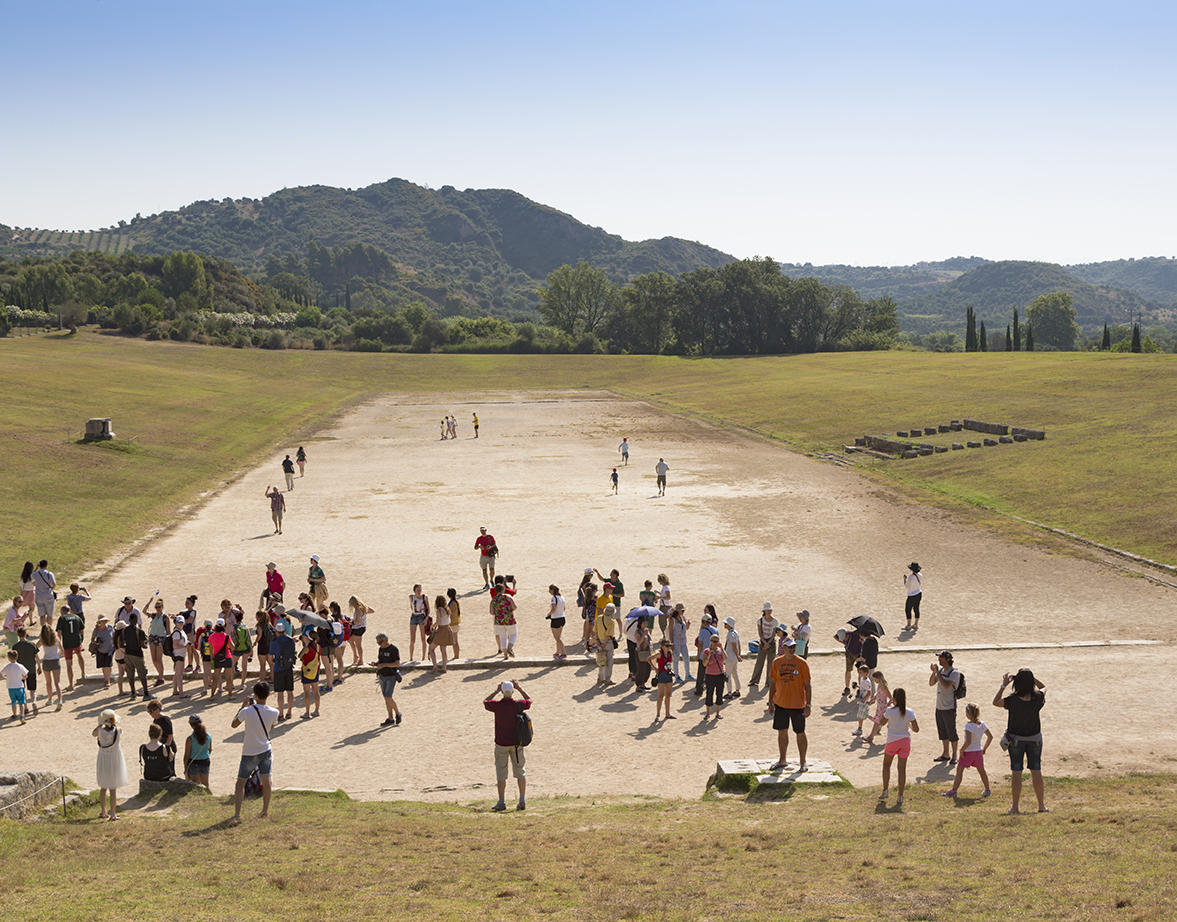 Were the fans attending the games very different from those of today?
J.-P. T.: Their behavior was not too different from that of today’s Italian tifosi or of PSG fans in soccer. In Rome, numerous spin-off products were sold such as terracotta oil lamps representing charioteers, statuettes, small folding pen-knives with bone blades engraved with the names of champions and horses, and so on. There were in fact four teams of chariot drivers, each with its own color (red, white, blue or green) . On the terraces of the Circus, supporters might shout “Come on, you reds!” or “Come on, you blues!” By way of anecdote, an epitaph was found on a tomb of that time stating “venetianus,” which means something like “He was a blue.” It’s like finding the tombstone of some modern-day soccer fan summing up his life thus: “Here lies a lifelong LA Galaxy fan.” The same thing still happens of course: I once saw a soccer ball engraved on the tomb of unknown person, which I believe is fairly common in certain Latin American countries for instance. Sporting events in antiquity stirred up the same emotions as today. Spectators, thrilling to the exploits of their champion, would applaud skillful actions and jeer their rivals. Of course things were very different back then, chiefly from the religious and political standpoints. But when everyone’s favorite charioteer pipped his rivals at the finishing line and the crowds screamed for joy, I think that the spiritual dimension basically went out of the window anyway.

See author's bio
Follow @FabienTrecourt
How Many Sexes Are There?Previous
Wood: a Material for the Future?Next

Slideshow
Sports science in all fields

Article
A Remedy for Performance Anxiety?

Article
Athletes and Scientists Together for the 2024 Olympics