Men's 400 meter hurdles final at the Olympic Games in Athens (2004).
Tim de Waele/Corbis via Getty Images
Share
Share
Researchers have developed a computer model that can identify whether an athlete may have engaged in doping based on their performance history.

A new digital weapon to fight doping? A CNRS team has developed, in collaboration with doctors from the International Association of Athletics Federations (IAAF),1 a digital tool that can detect the possible use of illicit substances by an athlete.  Maria João Rendas, a CNRS Researcher at the "I3S" laboratory2 and her colleagues (Asya Metelkina, postdoctoral fellow, and Luc Pronzato, CNRS senior researcher) state that their computer model can sift through databanks of results from multiple years of international competitions, in order to identify athletes whose performance evolved abnormally. All without triggering a single investigation.

Today the struggle against cheaters in sport has all the qualities of an endurance competition. The World Anti-Doping Agency (WADA) recommends using a series of controls carried out according to a specific protocol, along with the implementation of a "biological passport" known as an ABP (Athlete Biological Passport). This passport, which is specific to every high-level athlete, compiles the results of all official biological samples he or she has been subject to during their career. By allowing the multi-year monitoring of various key indicators, such as blood count for hemoglobin or immature red blood cells (reticulocytes)—and soon the concentration of steroids in urine—it can help identify suspicious cases, and eventually lead to sanctions. Since the implementation of this system in 2009, the results obtained from ABPs have led to the suspension of dozens of athletes, primarily in sports such as track and field and cycling.

However, the biological passport has a prohibitive cost, limiting the number of athletes monitored by this procedure, and the frequency of samples they are subject to. Hence the IAAF's desire to have a tool to complement the ABP, one that would allow it to constantly survey the athletes’ performance, and thus better target the hundreds of high-level athletes that are monitored each year. 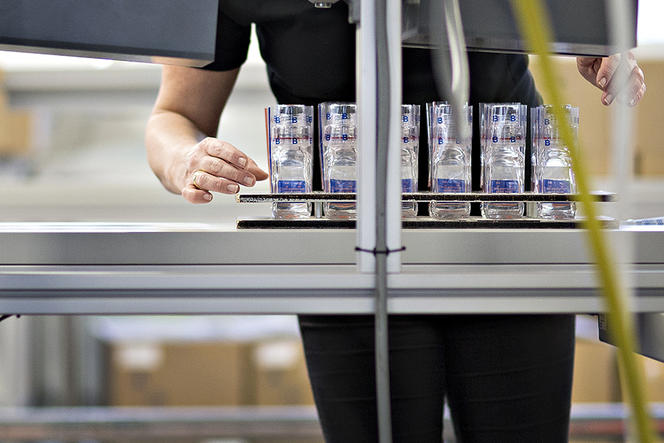 Device used to check athletes for doping the 2018 Winter Olympics. 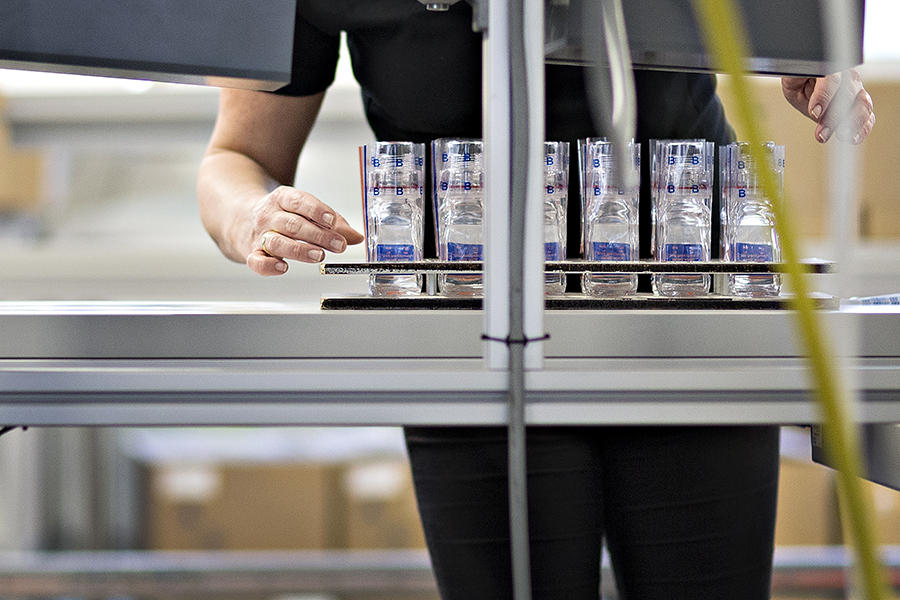 This is precisely what scientists from the I3S laboratory achieved, as part of a collaboration with the IAAF between June 2017 and June 2018. This is not the first sports-related experiment for this research team that specializes in information processing. Indeed, it had previously worked on divers’ "dive tables" (which identify the decompression stages that must be followed when returning to the surface).  The project involved configuring models for the formation of bubbles in the blood, in view of determining whether it is possible to adapt these tables to the capacities of particular populations, or even each individual.

In the current project, the researchers analyzed the IAAF's databanks of athletic performance to develop models and curves showing how the performance of an athlete evolves according to age. The idea is that doping would probably translate into progress that is different from other athletes, thereby making it possible to, if not prove fraud, then at least to identify unusual performance records.

The exercise proved more difficult than they anticipated. "A high-level shot putter or 400-meter runner competes in multiple events per year," explains Rendas. "Yet his or her performance will vary from one event to another. Fatigue linked to the progression of the season, the nature of the field, the weather, and other factors such as events in their personal life can result in variations." The central difficulty for researchers was to successfully model the phenomenon while taking into consideration the existence of these situational variations. 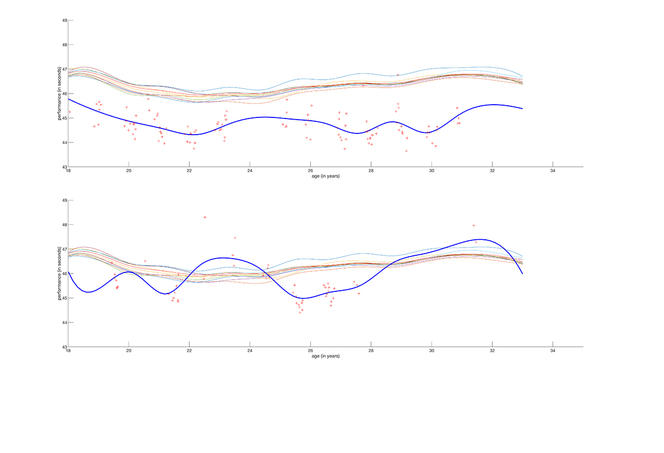 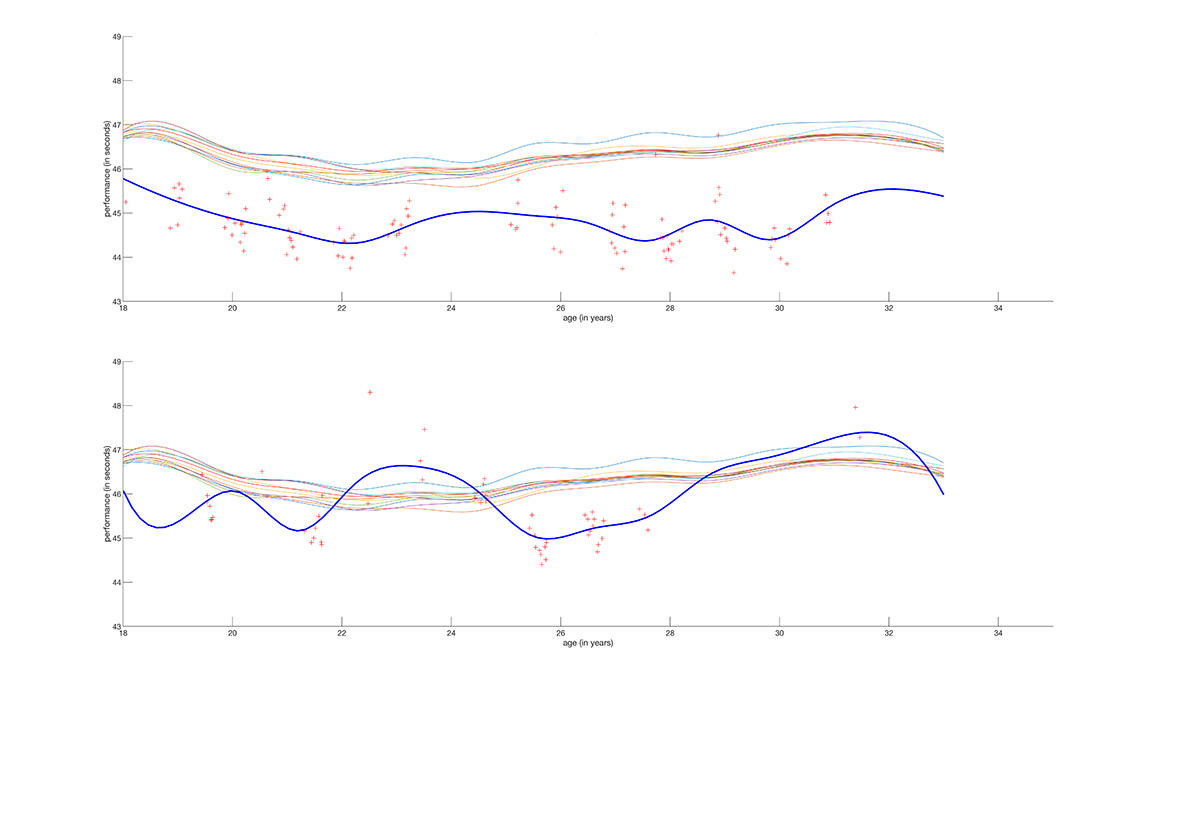 On top, the blue curve shows the performance of a champion not suspected of doping. The times he has achieved are lower than those of other athletes. At the bottom, the blue curve indicates the performance of an athlete suspected of doping: they improve atypically at the end of their career.
M.J. RENDAS/Laboratoire I3S
M.J. RENDAS/Laboratoire I3S
Share
Share

The results confirmed their initial intuition that within a given sport, the performance of athletes follows progress curves that are fairly similar regardless of their level. For example, a 400-meter sprinter's time would rapidly increase early in their career, and begin to worsen after the age of 24 or 25. By contrast, in shot put, a sport that requires the acquisition of technique, it will take more time before initial efforts are rewarded.

Rendas and her colleagues believe that their model can, with a high degree of confidence, identify unusual evolutions. This is true whether it involves poor results after an injury, or on the contrary an unexplained increase in performance, often late in a career. Furthermore, they point out that they can do so relatively early on, in other words not long after an abnormal variation in performance occurs.

Initially developed for track and field (races, jumping events, throwing events), and easy to use in conjunction with a database once the learning phase is complete, this computing tool could be adapted to other sports in which performance is based on physical, rather than tactical or technological, factors. This, for instance, is true of swimming or rowing, in which the goal of doping, as in track and field, is to artificially increase the muscle mass or respiratory capacities of athletes...

The system is currently being tested by IAAF, which hopes to make it available soon to the AIU (Athletics Integrity Unit), the independent organization tasked with the anti-doping effort in sports. It has already identified a few suspicious situations, and could eventually be combined with information contained in the ABP. "It's a major step forward," believes Stéphane Bermon, director of the IAAF's "Science and Health" Department. "The availability of this new tool should rapidly increase the effectiveness of controls." By targeting biological samples in a more informative manner, it will make cheating that much more complicated.