Africa, A World in Transition

Africa, A World in Transition

In Dakar, traffic jams and air pollution are increasingly a part of everyday life for inhabitants of Senegal's capital.
Jean Marc QUINET/REPORTERS-REA
Share
Share
Obesity, cardiovascular diseases, demographic explosion—West Africa is currently undergoing major changes that are due, among other factors, to globalization and climate change. The objective of Agir, now a Centre of Excellence for Africa, is to study these developments and help local populations adapt. Its director, Lamine Gueye, and assistant director, Jean-Luc Peiry, provide their analysis.

The Agir center1 that you are responsible for was just chosen by the World Bank as a Center of Excellence for Africa, earning it 6 million dollars of funding over the next four years. What does your research involve, and what is your laboratory's role?
Lamine Gueye:2 Our center's mission is to develop knowledge on West African socio-environmental systems in the context of global change, in order to help people who experience these transformations and ensure their health and well-being. Our actions essentially boil down to understanding, adapting, developing, protecting, and restoring.

What are the central challenges for the years ahead?
L.G.: Africa must contend with a series of transformations stemming from the impact of global warming (air pollution in major cities, water pollution, deforestation, soil and coastal erosion, lack of water) as well as the effects of globalization: socioeconomic development, chaotic urban growth, changing lifestyles of inhabitants, the emergence of new diseases. The challenge is to successfully integrate the epidemiological, nutritional, ecological, economic, energy, and demographic transitions which are at work, all while ensuring the well-being of the population. In Africa people are experiencing these changes in an accelerated manner with no preparation, unlike countries in the North which have had time to experiment with them and implement ad hoc measures.

Jean-Luc Peiry:3 It is precisely because our countries have made a certain number of errors, especially in matters of urban planning, resource management, and biodiversity, that we can help African countries avoid them, by integrating environmental and social dimensions in their development.

Demographic transition is a key issue. What are its impacts on health?
L.G.: The population doubles every twenty-five years. There has been an exodus of people from the countryside toward cities, and at the same time an ageing of the population. For example, 25% of Senegalese today live in Dakar, which is 2 to 3 times what its population was thirty years ago, and in the last twenty years, life expectancy has increased from approximately 50 to 64 years. These transformations are not without consequences. The burden of infectious diseases such as AIDS, malaria, and tuberculosis, which is in sharp decline, is now accompanied by those related to "development." Cardiovascular diseases have exploded due to urbanization, sedentarization, the massive arrival of processed food products that are high in fat, sugar, or salt, along with smoking, pollution from cars and industry, and an ageing population. 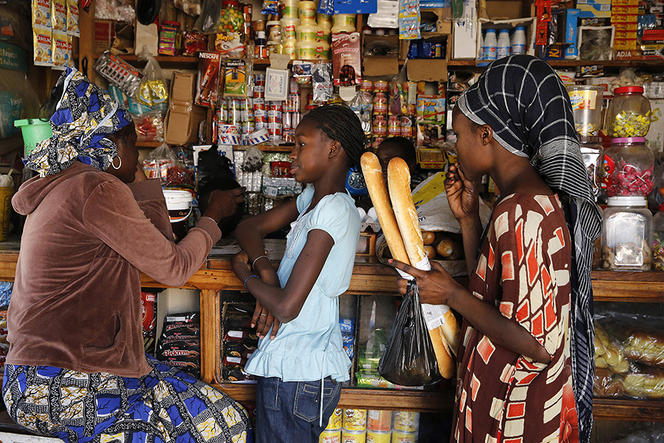 In Dakar as in the rest of Senegal, imported products such as rice, palm oil, and sugary soft drinks have replaced traditional food, which is more frugal and based on corn, beans, watermelons... 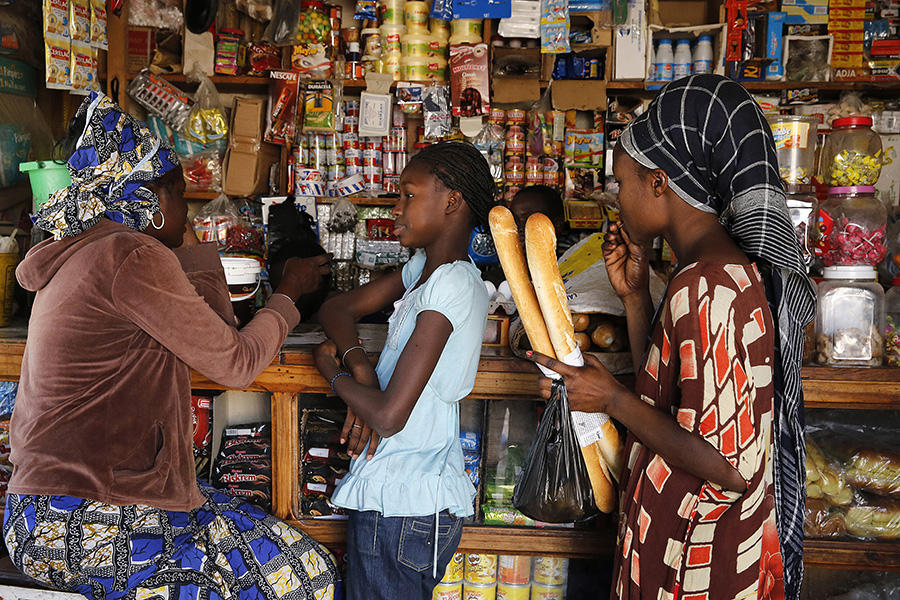 Have you conducted research on this epidemiological transition?
L.G.: A number of studies have confirmed that arterial hypertension has become a public health problem, as demonstrated by multiple studies, including those published in PlosOne. In Dakar, 24.7% of inhabitants above the age of 20 suffer from hypertension, a rate similar to those in developed countries. Even more worrisome is the fact that this condition remains largely unknown to the public: only 28% were informed of their condition, and 16% received treatment. Obesity rates have also undergone an alarming rise: 9.7% suffer from obesity, including 16.5% of women and 4.7% of Dakar's schoolchildren. Two-thirds of hospitalizations today are due to strokes resulting from an ageing population. Strokes are the leading cause of death in the neurology unit at Fann University Hospital in Dakar, where I worked for nearly ten years (from 1992 to 2010).

Are these "development diseases" affecting rural populations?
L.G.: Obesity is rare in the countryside, but diabetes, which practically didn't exist in West Africa during the 1980s, affects 17.9% of the population in Dakar today, and continues to spread in Senegal's most remote areas. One study published in the World Journal of Diabetes, conducted in Tessékéré (in the Ferlo region of Northern Senegal), home to the pastoral Fulani people, showed that 4.2% of those over the age of 20 had diabetes, with two-thirds of them not having been diagnosed. This is due to difficulty in accessing care and prevention, due to a lack of staff in health centers.

J.-L. P.: The nutritional transition has been proceeding rapidly. A few years ago, the Fulani, whose culture and economy is centered on livestock, had a fairly frugal diet based essentially on millet, milk, and a few local products from rainfed agriculture: corn, beans, watermelon, and more rarely meat. Today, they increasingly eat imported products such as rice, pasta, palm oil, bouilllon cubes high in salt, and sugary soft drinks. The development of weekly markets in each village also modified the composition of meals.

This is compounded by another major problem, desertification. How does it take hold?
J.-L. P.: 50% of Senegalese are under the age of 20, and the rural exodus does not compensate for demographic growth in the Sahel. Each Fulani breeder has 100 to 500 cows, and an equal number of sheep and goats to feed. Pastoral pressure is so great that it requires a permanent search for new pastureland. Toward the end of the dry season, there isn't a single blade of grass on the ground, and livestock farmers have to cut the lowest branches on trees to feed their livestock. Livestock feed, along with the use of wood for construction and cooking, are so many factors that accelerate desertification. The country has lost 675,000 hectares of forest in fifteen years.

This pastoral pressure must also have an effect on water resources. What is the situation in the Ferlo area, where you work?
J.-L. P.: Since the discovery in the 1930s of a large fossil groundwater reserve located 100 to 350 m beneath the ground, well drilling dramatically increased to provide water for the population and livestock. During the 1960s, there were 35 well drilling sites, all located 30 km from one another; today there are a several hundred, and their number continues to increase. Aside from causing accelerated desertification around the well due to the overgrazing of flocks, increasing needs linked to a rise in population and livestock pose a threat to this nonrenewable resource in the long term. 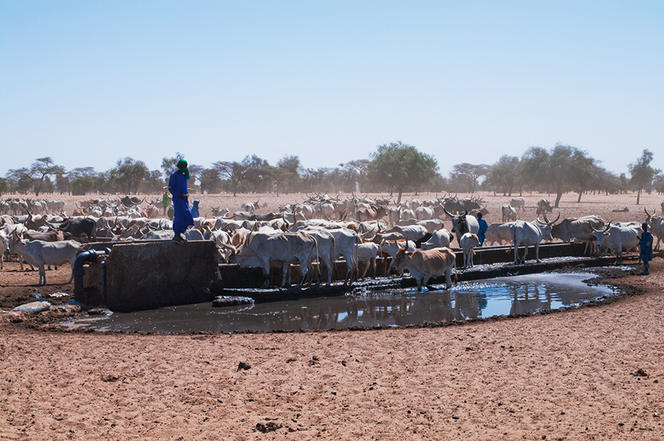 In Tessékéré, located in the Northern Senegalese area of Ferlo, growing needs for water has led to accelerated desertification around wells and are threatening the longevity of this nonrenewable resource. 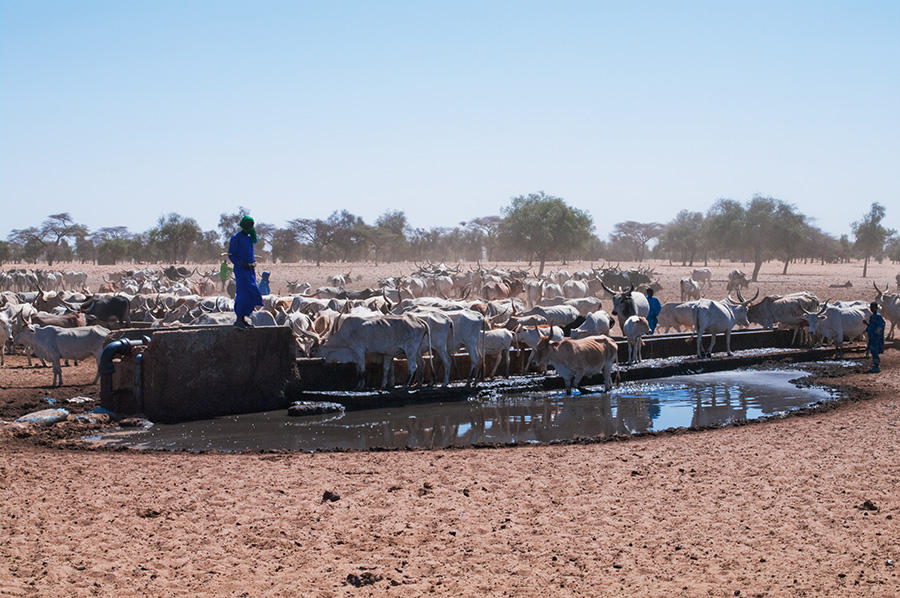 L.G.: This over-exploitation is compounded by increasingly deep well drilling. Beyond 200 meters of depth, the water's salt content surpasses recommended norms , and represents a risk factor for hypertension. A recent study4 of these populations clearly showed that the risk of hypertension is 4 times higher in certain areas, where the water is very salty. This is one of the factors that explain why the Fulani have rates of hypertension comparable to those of inhabitants from Dakar.

You are taking part in a number of revegetalization projects in the Ferlo region. What sort of action can you take to restore the ecosystems?
J.-L. P.: Through the Observatoire hommes-milieux international Tessékéré, we are analyzing the socio-environmental changes brought about by the implementation of the Great Green Wall. For instance, the project has developed multi-use vegetable gardens that are managed by women, and are designed to diversify diets and provide an additional source of income for families. Each year, 5000 ha of trees are planted with local species that are drought resistant and of high economic value, such as the gum acacia for its gum arabic used in candy manufacturing, or the desert date for its oil used in food and cosmetics. The long-term objective is to create new local networks to enable inhabitants of these semi-arid areas to diversify their income, thereby making them more resilient to climatic hazards.

L.G.: The desert date also has qualities that can fight hypertension. The goal is to replant cosmetic and medicinal plants that are part of the traditional pharmacopeia, and whose properties are familiar to the local population. Deepening this knowledge and using these properties in a converted form could alleviate the absence of medicine. 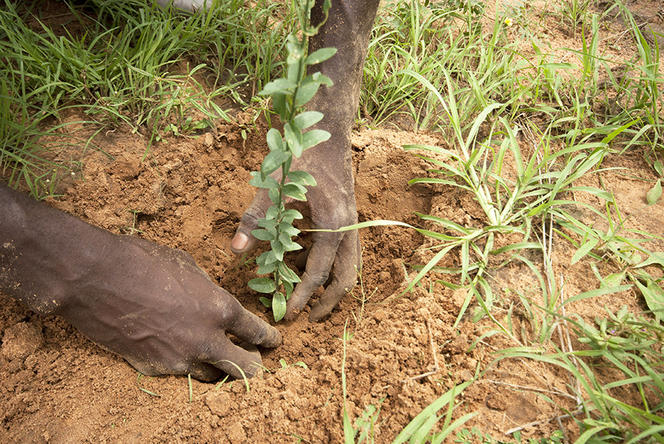 Planting of desert date trees during the rainy season in the Ferlo region of Northern Senegal, on a plot of land that is part of the Great Green Wall, a Pan-African development and reforestation program. 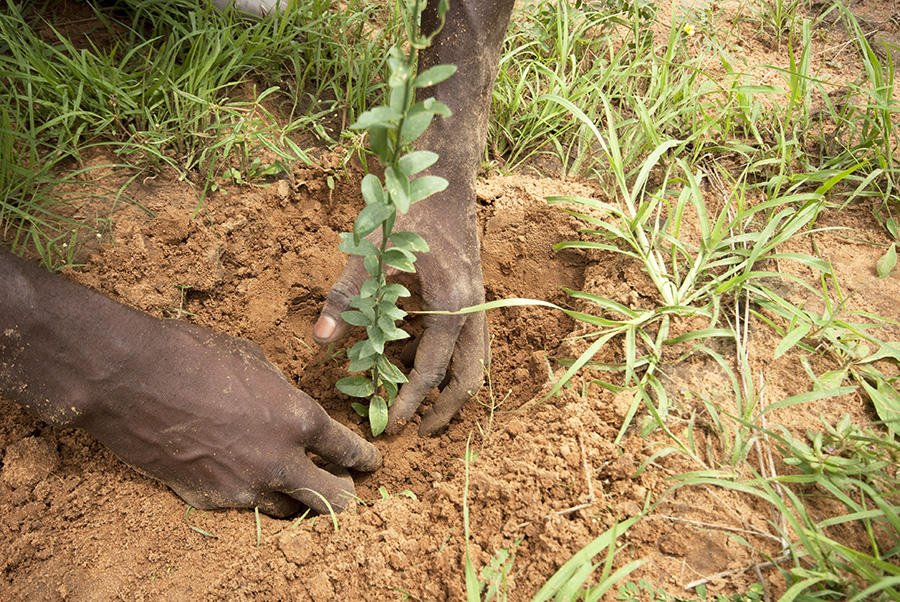 Agir has just been chosen as a center of excellence. Has this opened new possibilities?
L.G.: The 26 new centers of excellence for Africa that were selected are designed to reinforce higher education at the recipient universities, in a number of fields identified by the World Bank. In our case these are the environment and health. The financing of 6 million dollars that was granted will enable our center to increase its educational capacities in eco-health, particularly on the masters and phD level, boost interdisciplinary research, finance doctoral and postdoctoral grants, and purchase pedagogical materials and research equipment that is woefully lacking here. We could respond more easily to international calls for projects, attract better students, and expand our network of influence. This certification will allow us to change our scale of work.

J.-L. P.: The program is designed to impact the development of Africa. That is why the applied research dimension is essential. Our center's purpose is to drive innovation by developing and promoting our research, through the establishment of partnerships with various administrations, state services, and companies. We would like to expand our network and serve as experts and referent in the field of environment and health, in an effort to help develop strategies and products that meet the standards of a sustainable economy.