Home / Articles / A Planetary System that Could Support Life

A Planetary System that Could Support Life

Home / Articles / A Planetary System that Could Support Life

A Planetary System that Could Support Life

Artist's view of the Star Trappist-1 from the surface of one of the seven planets orbiting it. Several of these planets are at the right distance from their star to potentially harbor liquid water on their surface.
ESO/M. KORNMESSER/spaceengine.org
Share
Share
Seven Earth-sized planets have been detected orbiting Trappist-1, an ultra-cool dwarf star in our galactic neighborhood. Some of them appear to be potentially habitable. The latest results of this study were published today in the journal Nature.

Never before has the discovery of a new exoplanetary system caused such a wave of excitement among astronomers. An international research team has detected no fewer than seven planets, all around the same size as Earth, and probably rocky, like our own planet, orbiting a star fairly close to us, at a distance of only 40 light years.1 Even more promising is the fact that several of these exoplanets have the conditions required for liquid water to exist at their surface. All of these factors conspire to make this system one of the most promising targets to date in the search for signs of life beyond our Solar System.

The seven new planets orbit a very special type of star: an ultra-cool dwarf. Much smaller and cooler than our own Sun, these stars are generally passed over in the search for exoplanets since they are not particularly luminous and are thus far less visible. However, after five years analyzing some 60 such stars, the Belgian Trappist telescope, located in Chile, has uncovered a rare pearl: a star christened Trappist-1, only 12% of the size of our Sun, and emitting just 0.05% of its luminosity. 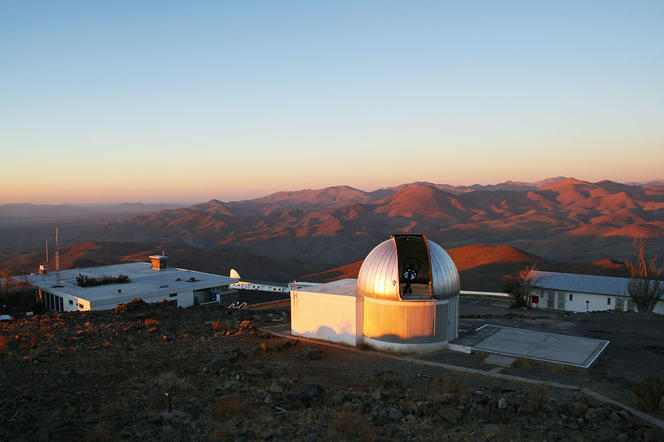 The first discoveries concerning the new planetary system were made in 2015 using the Trappist telescope, located at the La Silla Observatory (Chile), which gave its name to the star. 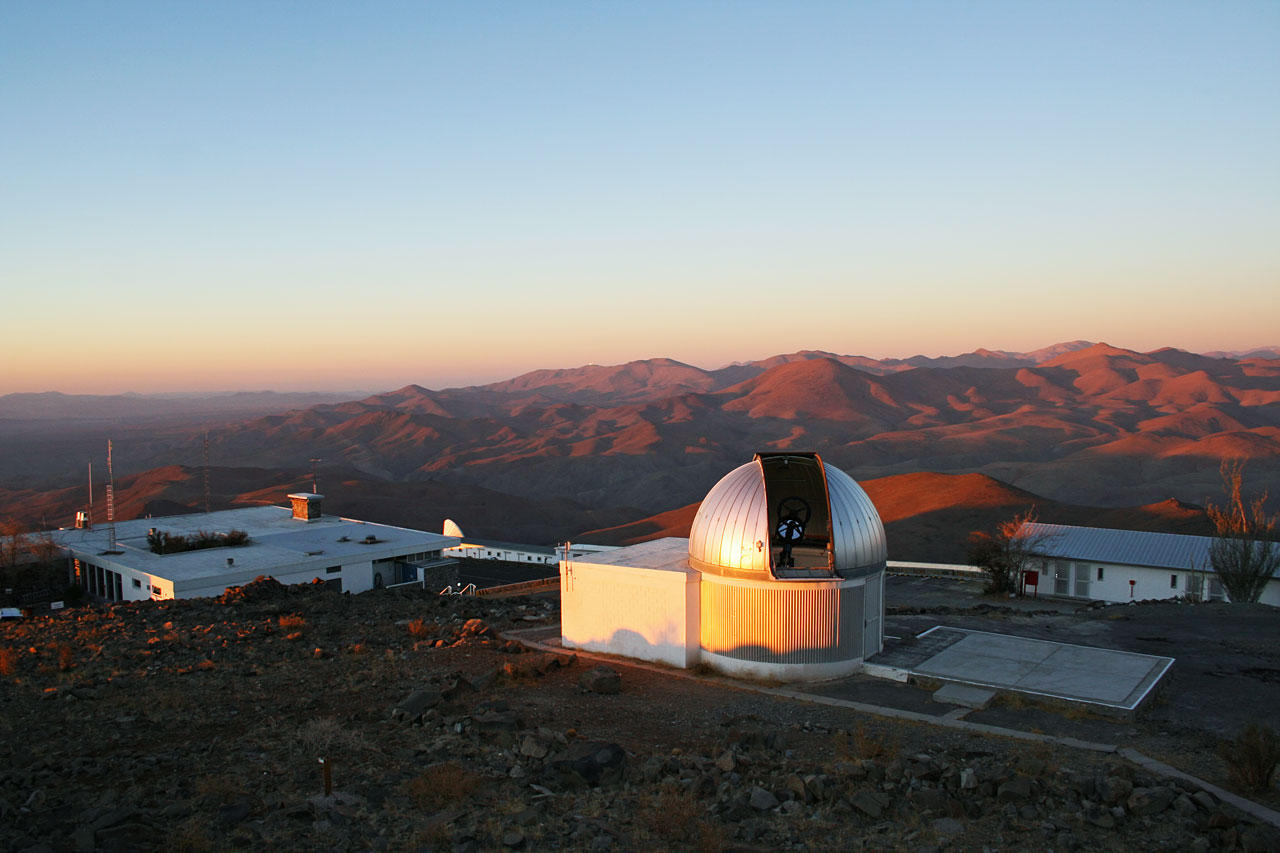 The first discoveries concerning the new planetary system were made in 2015 using the Trappist telescope, located at the La Silla Observatory (Chile), which gave its name to the star.
ESO
ESO
Share
Share

Researchers led by Michaël Gillon, of the University of Liège in Belgium, have been studying the infrared light emitted by this miniature star and have detected drops in luminosity characteristic of transits, i.e., the passage of astronomical bodies moving across its face. As early as 2015, the first three planets (dubbed b, c and d) had been identified. Tracking the system using Trappist and the space telescope Spitzer, the team was then able to identify four others planets (e, f, g and h) in 2016. Based on the frequency of these transits and the degree of reduction in luminosity of the star, they have demonstrated that these seven planets are all comparable in size to Earth (to within 15%), and orbit very close to their star. Ths six closest planets have orbital periods respectively of 1.5, 2.4, 4, 6, 9 and 12 days. The orbital period of the seventh planet (h) has not yet been determined.

What are these worlds like? And are they capable of supporting life? Although it is impossible to answer these questions with any certainty, since none of them has been photographed, astronomers nevertheless have sufficient information to begin working on an initial portrait. First, because of their size, all seven planets could be rocky like the Earth. They are thus not gas giants on which any form of life appears impossible.

Further, given the distance of the planets from their sun and the light emitted by the latter, astronomers have been able to estimate the amount of energy they receive. Conclusion: “three of the planets (e, f and g) are located in the so-called ''habitable'' zone relative to their star, a region in which it is neither too cold nor too warm for water to be present in liquid form at their surface,” says Franck Selsis, one of those involved in the discovery at the Laboratoire d'astrophysique de Bordeaux.2 This is an essential condition for life as we know it to be able to develop. 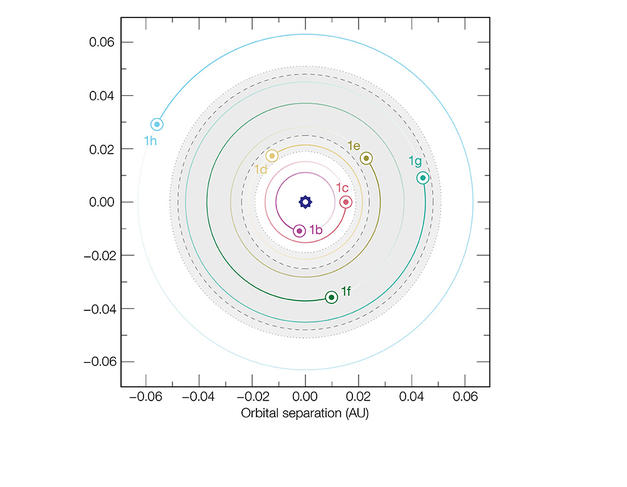 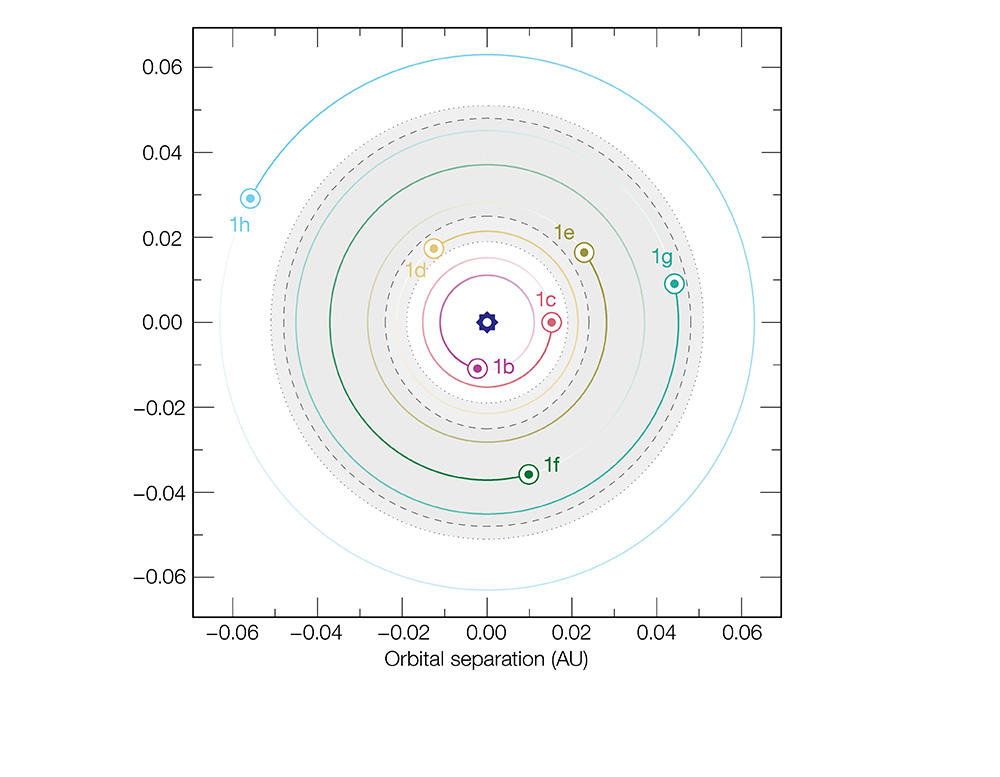 The orbits of the seven planets around TRAPPIST-1. This diagram shows the relative sizes of the orbits of the seven planets orbiting the ultracool dwarf star TRAPPIST-1. The shaded area shows the extent of the habitable zone, where oceans of liquid water could exist on the planets.
ESO/M. Gillon et al.
ESO/M. Gillon et al.
Share
Share

And scientists have good reason to hope that water does indeed exist at the planetary surface. They base this on the special configuration of the planets among themselves. Mutual resonance exists between their orbits: for example, for each orbit of planet g around Trappist-1, the planets closer to the star complete more orbits . “This orbital resonance appears to result from the collective migration of the planets towards the star shortly after their formation,” explains Selsis. “They thus seem to have been formed further out than their current position. At a greater distance from the star, water would be more abundant and could thus make up a greater proportion of their composition.”

A further indicator of the potential presence of water is the mass of these planets, which again has been estimated using the atypical configuration of the seven bodies. Since they are very close to one another and display orbital resonance, their gravitational interaction means that their transits do not occur at perfectly regular intervals, but are subject to advances and delays, sometimes of more than an hour. It is using this phenomenon that the researchers were able to estimate the mass of the planets and, once their size was known, so too was their density. Thus, the current data appears to indicate that the planets orbiting around Trappist-1 are of relatively low density, and thus rich in water. “However, these measurements are not yet sufficiently accurate and further observations will be needed to be able to draw any definitive conclusions,” notes Selsis. 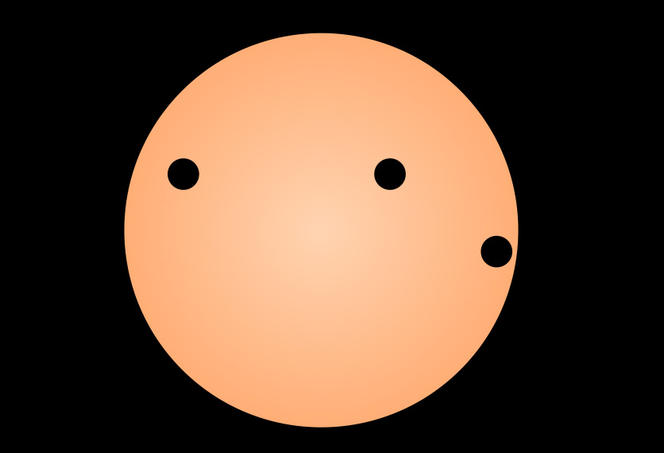 Up to three planets have been "seen" passing simultaneously in front of the disc of the star Trappist-1. 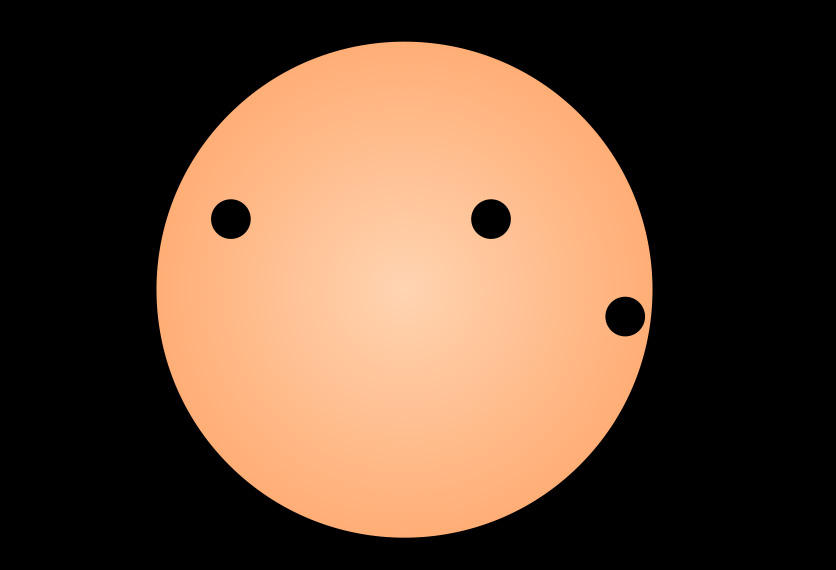 In the meantime, the astronomers are investigating all possible climatic scenarios for the set of planets based on the quantity of water present at their surface and on the size and composition of their atmosphere. To this, the scientists must add a further key element: given the proximity of the planets to their star, it is very likely that the gravitational tidal force of the star has ''tidally locked'' these planets, so that the time of rotation around their axis is equivalent to the time of one orbit around Trappist. Consequently, they will always have the same face turned towards their star. The side facing the star will be in permanent daylight while the opposite side will be plunged in continuous night.

The results of these models yield extreme cases, even for planets within the habitable zone of Trappist-1. There may thus be completely dry planets like our own Venus. But in many cases, where there is an atmosphere, water is often found in liquid form at the surface. Some of these virtual worlds appear exotic, with the diurnal hemisphere being completely arid while the nocturnal hemisphere is covered with pack ice or a sea. In some cases, the entire planet is covered by an ocean, which may contain some sea ice or possibly no ice at all. 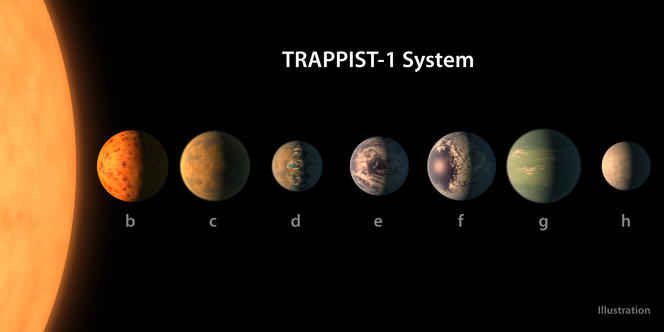 A size comparison of the planets of the TRAPPIST-1 system, lined up in order of increasing distance from their host star. The planetary surfaces are portrayed with an artist’s impression of their potential surface features, including water, ice, and atmospheres. 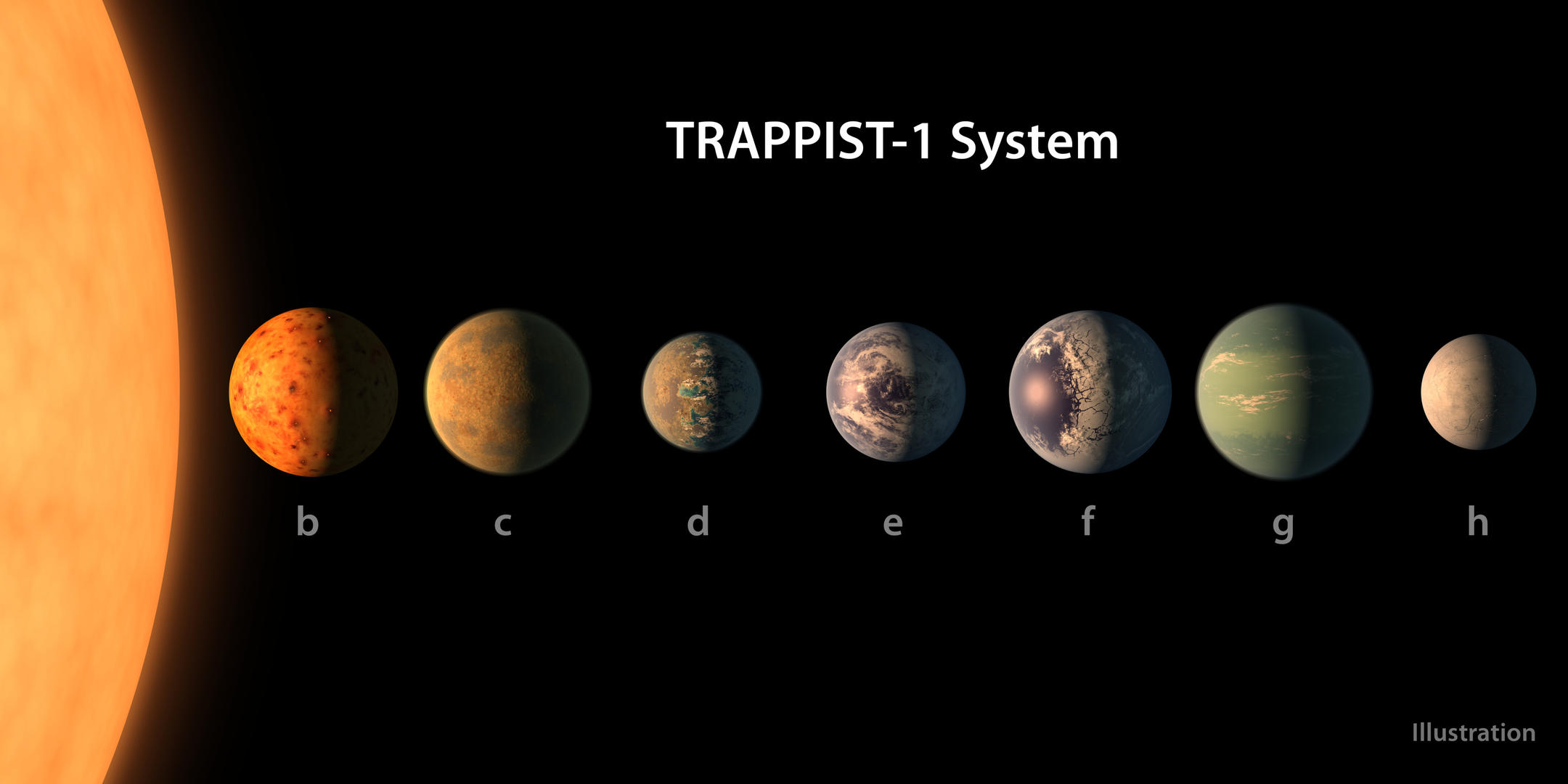 A size comparison of the planets of the TRAPPIST-1 system, lined up in order of increasing distance from their host star. The planetary surfaces are portrayed with an artist’s impression of their potential surface features, including water, ice, and atmospheres.
NASA/R. Hurt/T. Pyle
NASA/R. Hurt/T. Pyle
Share
Share

However, the planets outside the habitable zone may also contain surface liquid water in some very specific conditions. The two nearest planets (b and c), for instance, receive from their sun respectively four and two times more energy than Earth receives from our Sun. The illuminated hemisphere will be a furnace while the dark hemisphere will be suspended in interstellar cold. At the terminator, however, where regions exist in the eternal dawn and dusk of these planets, the temperatures could be sufficiently mild for water to be found in liquid form.

Clearly, no precedence can as yet be given to any of these scenarios. Yet they constitute predictions that may be examined by means of future observations. None of these planets can be photographed directly through a telescope in the foreseeable future, since they are too close to their star. However, it may soon be possible for astronomers, using in particular NASA’s James Webb Space Telescope, due to be launched next year, to detect the atmospheres of these planets if they exist, to determine in particular whether they contain water, and to ascertain their temperature, all of which will inform us of their habitability.

Travelling from Earth to TRAPPIST-1

About Share
About
Close
Description:
An animated journey from Earth to the TRAPPIST-1 system, passing the Moon on the way. The stars in the animation are accurately positioned, and the constellation of Aquarius (The Water Carrier), in which the system is located, appears to change as we fly through our nearby Universe. The tiny ultracool dwarf TRAPPIST-1 is so dim that it is invisible until we get quite close, when its seven orbiting planets can also be seen. The artist’s impression in this video is based on the known physical parameters for the planets and stars seen, and uses a vast database of objects in the Universe.
Année de production:
2017
Durée:
0:44
Réalisateur:
ESO/L. Calçada/spaceengine.org
Producteur:
ESO

Together with the planet orbiting Proxima, discovered last August, the planets of Trappist-1 today constitute the only rocky exoplanets whose atmospheres can be characterized. For this reason, they are the most promising targets in the search for life elsewhere in the universe. “The study of ultra-cool dwarf stars is valuable on two counts,” claims Selsis. “First, it is easier to observe a planet moving in front of a very small star than across an enormous sun. Second, the weak emission of light by such stars makes it easier to analyze the light passing through the atmosphere of their planets and thus to deduce the composition thereof.” Given that 15% of the stars close to our own Sun are ultra-cool dwarf stars, we can look forward to other discoveries in the future, which could perhaps include identical planets to our Earth.

Article
ALMA: the Universe in Detail