ALMA: the Universe in Detail

ALMA: the Universe in Detail

In March 2016, the news was splashed across the home page of the ALMA interferometer, a vast array of antennas located at an altitude of 5000 meters on the Chajnantor plateau, in Chile's Atacama desert. By increasing its resolution almost to a maximum, an international team had successfully obtained the most detailed image ever produced of the concentric rings and gaps of a protoplanetary disk. The dark areas of the rings of gas and dust surrounding these young stars are thought to be gaps left when planets in formation swept their orbits clear. Predicted by theory, they had never been observed before ALMA began operation. Since they were discovered in 2014, they have become a new and fascinating research focus for astronomers.

A future Mecca for science

The decision to build ALMA was taken by the ESO and NRAO1 in 1997, and construction began in 2003, with Japan joining the project in 2004. ALMA is dedicated to observing the sky in a non-visible part of the spectrum, at millimeter and submillimeter wavelengths. It can study phenomena that are often invisible to conventional optical instruments, twenty-four hours a day, almost throughout the entire year.

Only two and a half years after its official inauguration in October 2013, ALMA has become a Mecca for science. The huge facility, whose construction has mobilized human, technical and financial resources—to the tune of €1.4 billion—from three continents,2 is ramping up its power to full capacity. Of the fifty12-meter diameter antennas, each weighing 100 tons, that make up its main array and have been deployed on the Chajnantor plateau, 40 are already in operation. At the same time, the last three of the compact array's sixteen antennas (one 12-meter and two 7-meter antennas) will soon be made available to astronomers. And although three out of the ten frequency bands are not yet ready for observations, the essentials are up and running, allowing astronomers to explore and make use of the fantastic capabilities of this exceptional facility during what is known as the "Early Science" stage, scheduled to last until 2018. 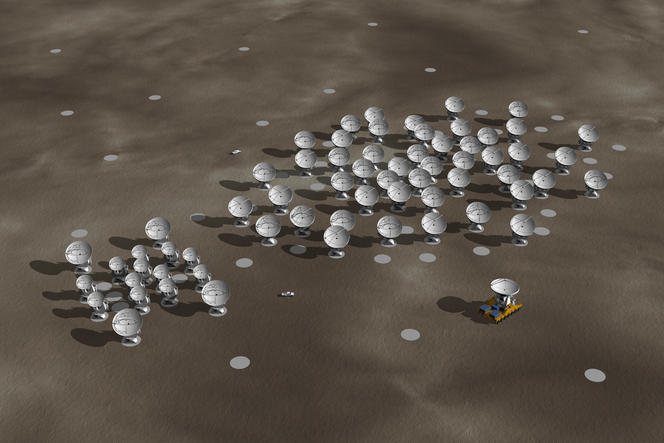 Artist's impression of the ALMA array in compact configuration: all the antennas are arranged in a circle measuring 250 m in diameter. 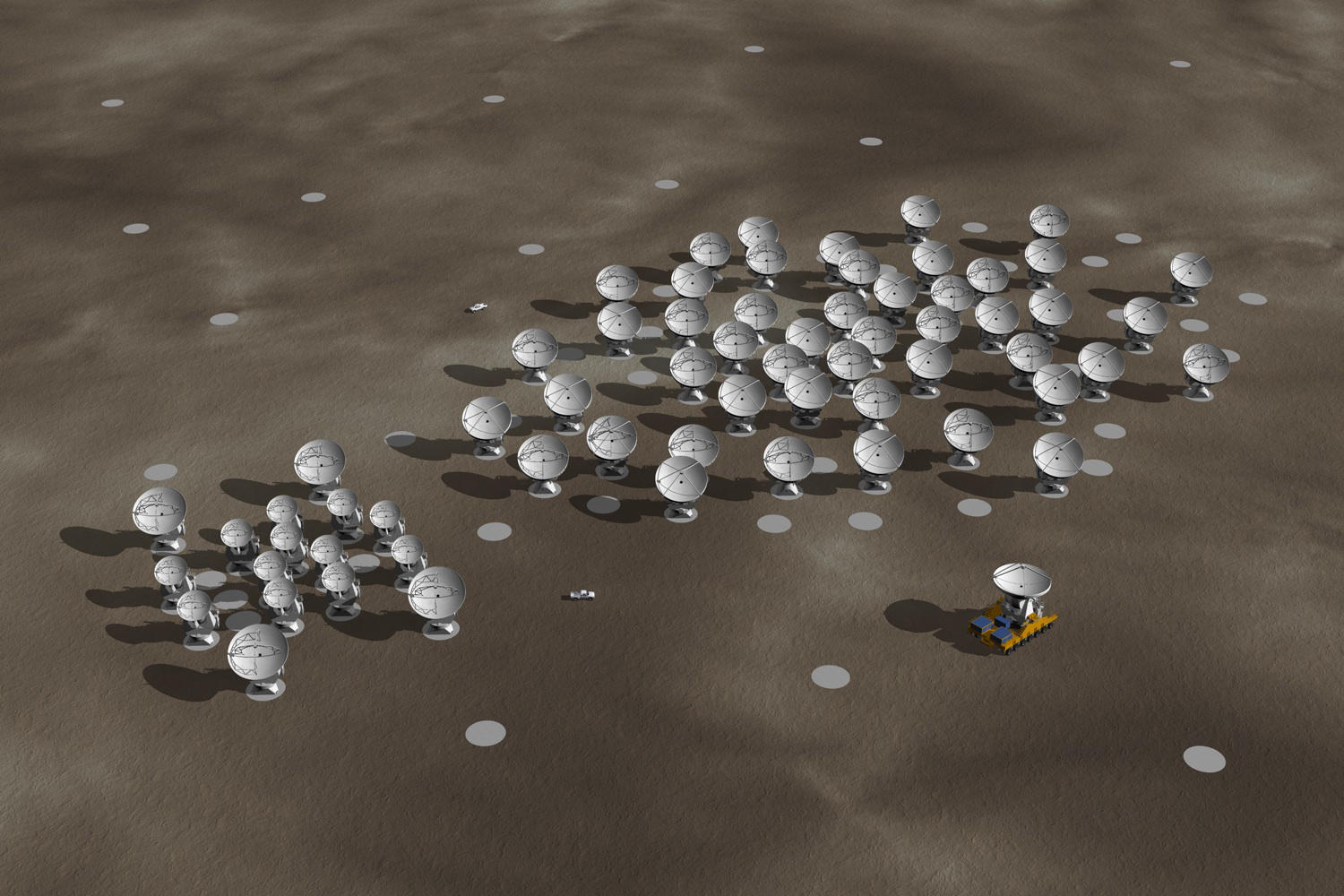 The main array and the compact array actually form two complementary instruments called interferometers. One will provide high-precision, high-resolution images of the sky, while the other will be used to produce wide-field surveys. This makes ALMA the world's most powerful radio astronomy facility at millimeter and submillimeter wavelengths, and it will probably remain so for decades.

The promise of submillimeter astronomy

First developed in the 1960s, the primary aim of submillimeter radio astronomy is to study cold objects in the Universe. Unlike conventional optical astronomy, which is only sensitive to hot bodies such as stars, it provides researchers with information about processes at temperatures of less than a few degrees or tens of degrees above absolute zero.

Various phenomena such as interstellar molecules, young stars hidden inside nebulae, and the major components of galaxies, provide evidence of the multiple stages in the cycle of interstellar matter, from the moment it clumps together and forms stars inside clouds of gas and dust to the time it is ejected into space when these stars come to the end of their lives.

ALMA's instruments will thus shed new light on the origins of galaxies, stars and planets, and provide answers to the fascinating question of our cosmic origins. The huge facility is able to survey a section of the sky in various sections of the electromagnetic spectrum. Each of its 66 antennas will eventually be equipped with ten radio receivers (of which seven are currently active), sensitive to different wavebands (wavelengths of 10 to 0.3 mm, corresponding to frequencies of 30-950 GHz). Some of them have hardly been explored, which should considerably extend the range of phenomena observable by astronomers. 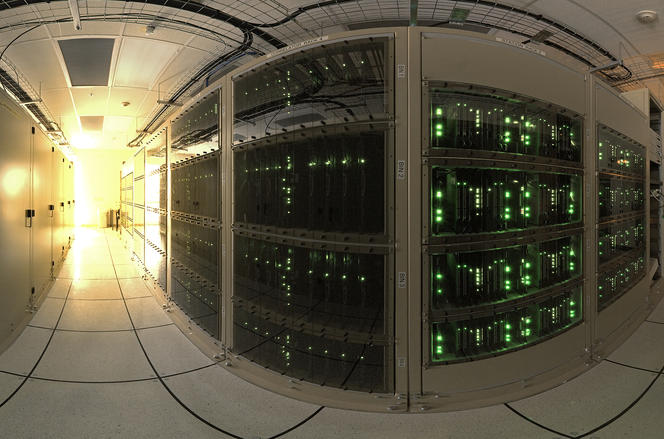 Picture of one of the four quadrants making up the ALMA correlator. 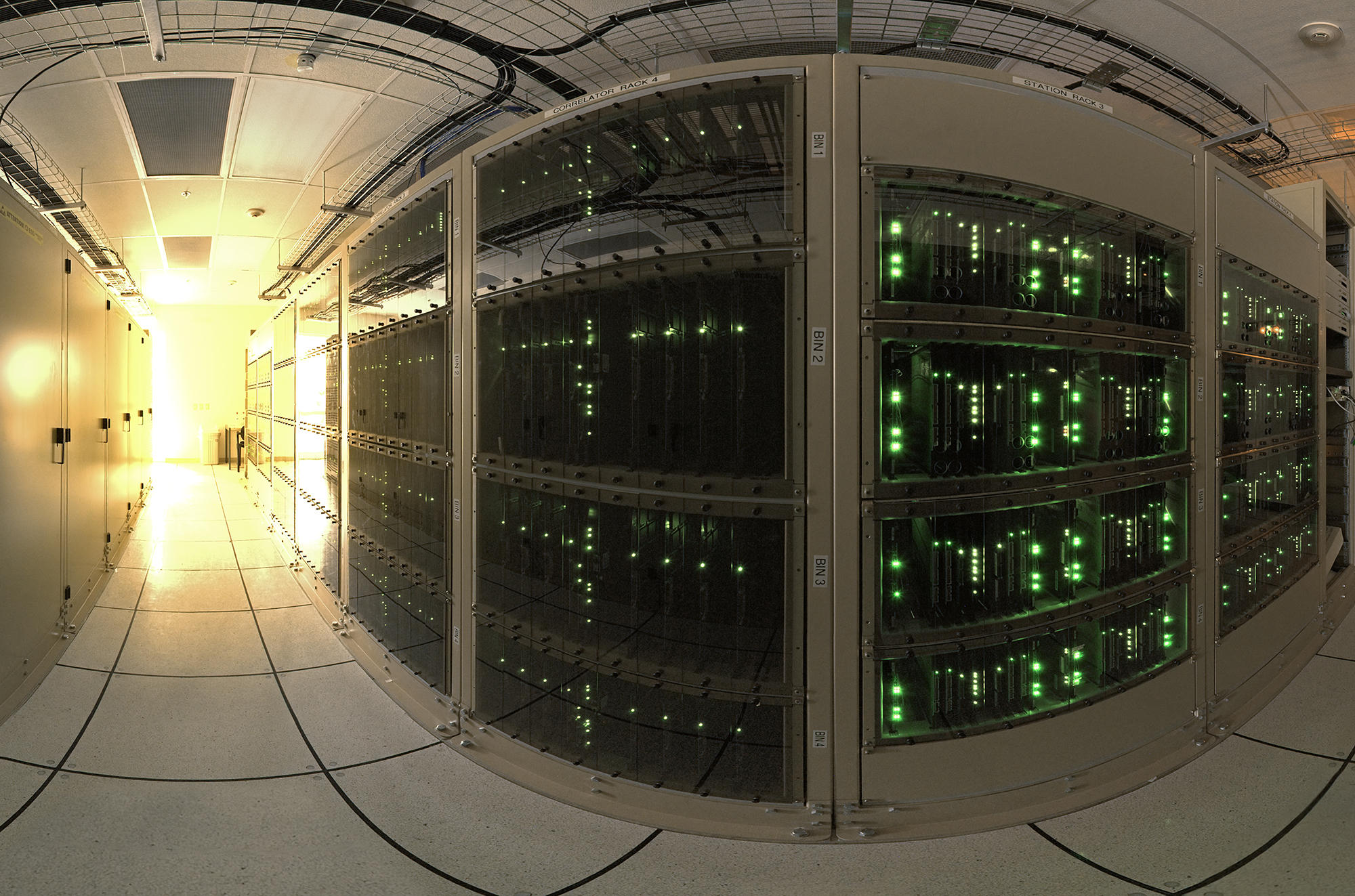 ALMA will also be able to produce images of the Universe of outstanding quality. Every antenna in its two interferometers has been designed to detect the extremely weak signals emitted by celestial objects. It then converts and amplifies them in each of its receivers, which are kept at -269°C. A device called a correlator corrects differences in the arrival times of light from a celestial body between one antenna and another, enabling the ALMA teams to generate an image, whose sensitivity and dynamics depend on the number and size of the antennas. Astonishingly, ALMA's resolution is equivalent to that of a telescope with a diameter equal to the maximum distance between the interferometer's antennas, which can be as much as 15 km.

An instrument of this kind is, of course, keenly awaited by astronomers, and they have no intention of waiting until the facility attains full capacity to start making use of it. "Four calls for proposals have already been issued, and a fifth that resulted in over 1600 applications for observing time has just been closed for the October 2016-September 2017 period," explains Sébastien Maret, a CNRS researcher at the IPAG.3 A staggering figure considering that only around 400 of them will actually be accepted.

The results speak for themselves. In astrochemistry, ALMA has already shown that it can detect rarer and more complex interstellar molecules than any discovered so far. For instance, it has already confirmed the presence of a sugar called glycolaldehyde near a protostar, and has found evidence of complex organic molecules around a protoplanetary disk. In cosmology, the instrument's ability to detect the most distant, and therefore the youngest, objects has also been demonstrated. Some teams have even successfully obtained images of galaxies located a mind-boggling 12.9 billion light years away. 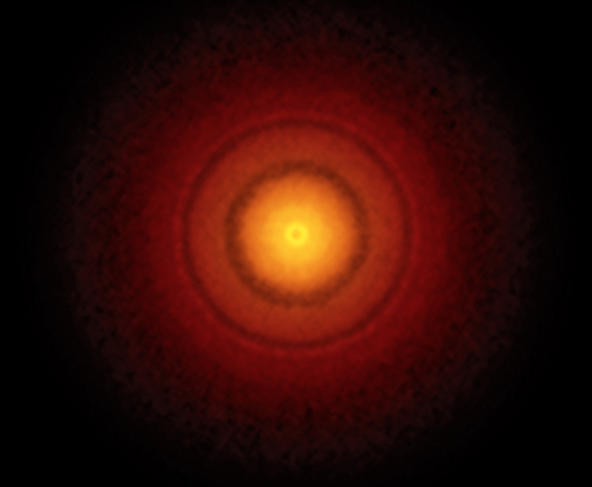 Image of the protoplanetary disk TW Hydrae, as observed by ALMA. 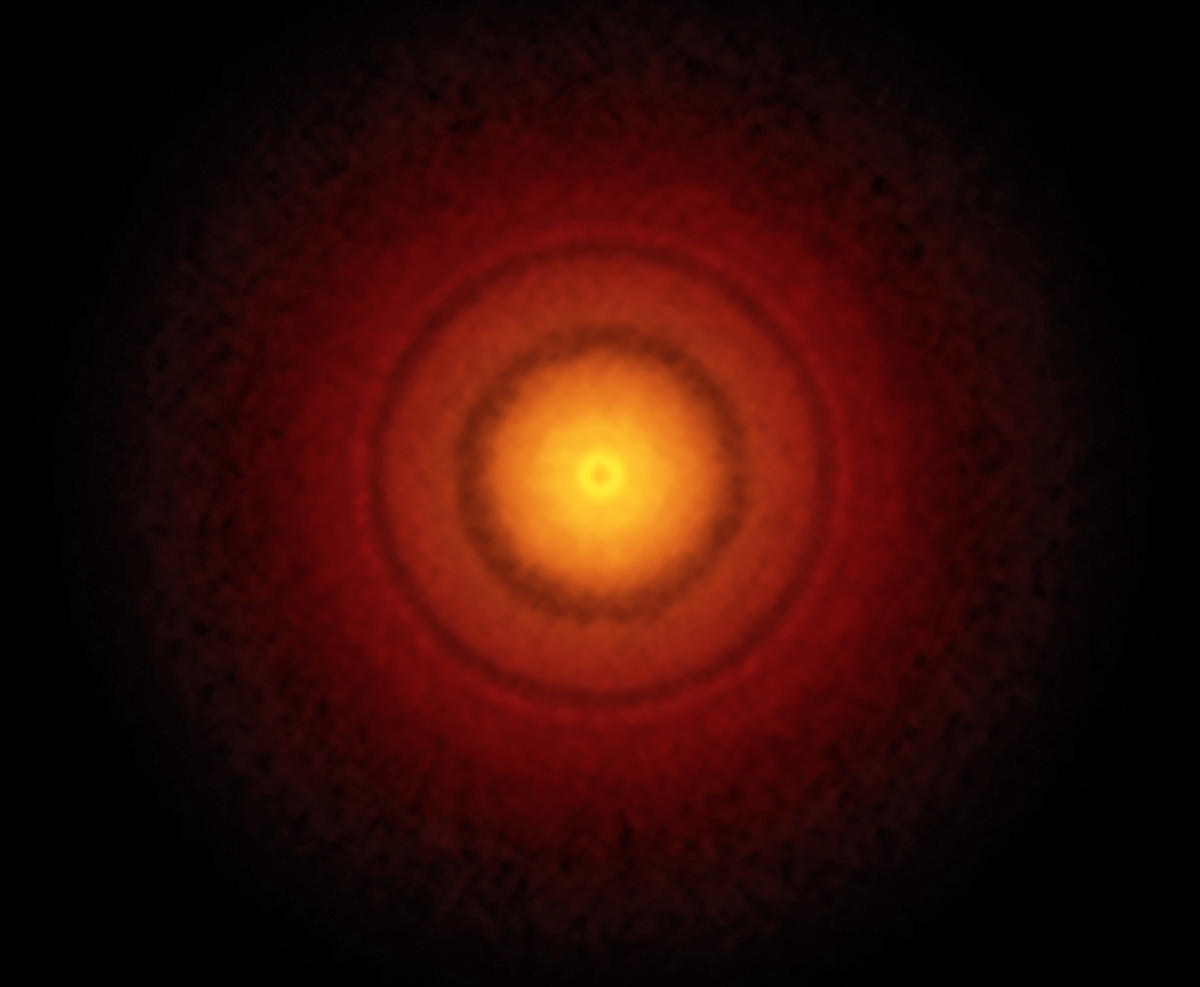 Furthermore, ALMA's exceptional resolving power has sparked off tremendous competition between astronomers, since it opens up a virtually unlimited number of areas of research, such as the study of protoplanetary disks, observation of star nurseries, characterization of the interstellar medium, or precise measurement of the mass of galactic black holes. And ALMA is not restricted to objects outside our Solar System. "ALMA's instruments are also able to provide additional information about the objects in our nearby environment, such as comets, Kuiper Belt objects, and planets, whose chemical composition, surface states and atmospheric circulation can be determined," points out Raphael Moreno, an astronomer at the LESIA.4

So what role is France playing in all this? Involved in the project via the ESO,5 which contributes 37.5% of ALMA's funding, the country boasts a large number of specialists in the radio astronomy field. France's success rate in calls for proposals is very high: no fewer than 30 of the 400 observation projects currently underway in Chile are led by French researchers, one of whom, Pierre Cox, is ALMA's current director. French industry has also made a significant contribution. The most noteworthy is the participation of Thales Alenia Space as the leader of the French-Italian-German consortium that built the 25 twelve-meter antennas provided by Europe. With a resolutely innovative design, they are ALMA's best antennas, and the only ones to meet all the initial specifications. 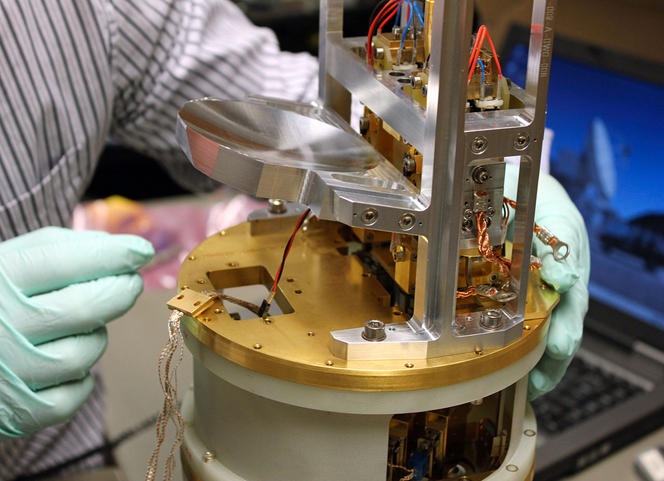 One of the 6 band 5 receivers, dedicated to the detection of radio waves whose wavelengths are between 1.4 and 1.8 mm. 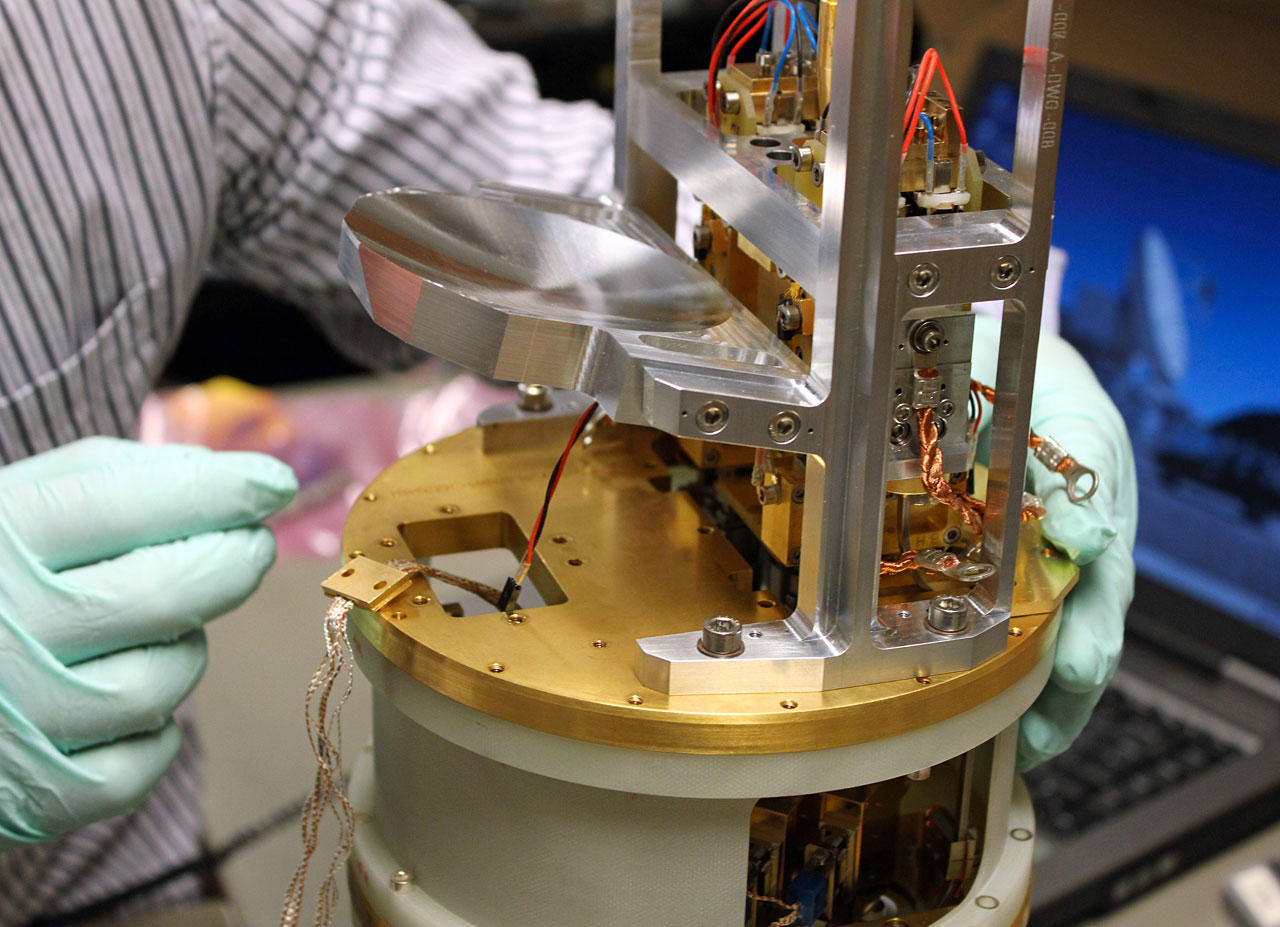 In addition, the firm STMicroelectronics worked with the Bordeaux Observatory6 to produce one of the main electronic components of the correlator. And some of ALMA's most frequently used receivers, known as Band 7 receivers, were designed and manufactured in Grenoble by teams from the IRAM,7 which acts as a regional platform for the European ALMA network. In charge of analyzing the raw data from the instrument, the IRAM helps astronomers in Europe to interpret them. A mission well suited to this institute, which is currently working on an ambitious project dubbed NOEMA.8 By 2019, the aim is to radically upgrade the IRAM's existing facility located at an elevation of 2552 meters on the Plateau de Bure, in the French Alps, into a sort of northern equivalent to ALMA. This will be a millimeter interferometer array with twelve antennas, the eighth of which has just been inaugurated. Although admittedly slightly less powerful than the Chilean interferometer, NOEMA will nonetheless be the most powerful facility of its kind in the Northern hemisphere.

0
An Immeasurable Quest for PrecisionPrevious
US Elections: A Reset for American Politics?Next