A Fields Medal for Hugo Duminil-Copin

A Fields Medal for Hugo Duminil-Copin

Hugo Duminil-Copin at the Institut des hautes études scientifiques in April 2017.
IHES/Marie-Claude Vergne
Share
Share
The French mathematician is one of four winners of the most prestigious award in his discipline, announced this morning live from the International Congress of Mathematics (ICM). He is distinguished for his work in the field of probability, a rapidly evolving field in interaction with many sciences.

Today he is at the top of his discipline: Hugo Duminil-Copin, a Professor at the University of Geneva and the Institute for Advanced Study (IHÉS), as well as a member of the Alexander Grothendieck Laboratory,1 was awarded the 2022 Fields Medal, the most prestigious global prize in mathematics, alongside three others: the Ukrainian Maryna Viazovska (second woman laureate in history), the British James Maynard and the American-South Korean June Huh. The announcement was made live at the International Congress of Mathematicians (ICM), which was exceptionally held online this year. It is the 16th Fields Medal won by a laboratory affiliated to the CNRS. 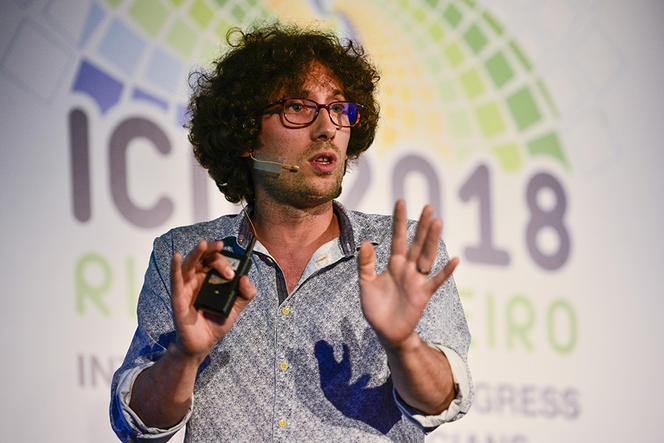 Hugo Duminil-Copin giving a lecture in 2018 at the ICM held in Rio. 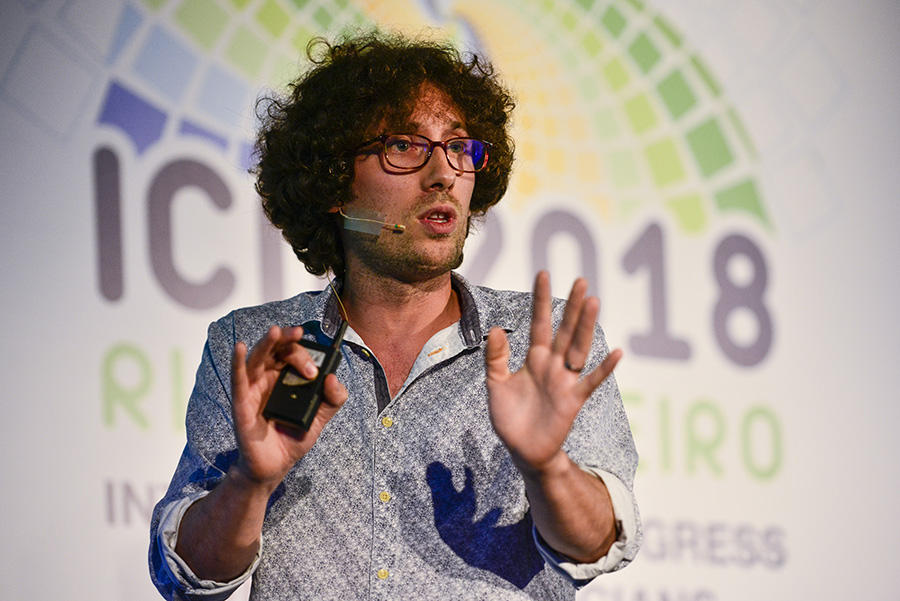 The field for this 37-year-old mathematician, who has won numerous international prizes including the one awarded by the European Mathematical Society (EMS), is probability. Les probabilités. Strongly associated in the popular imagination with games of chances, probability gradually emerged as a fully-fledged field of research, and currently makes contributions to most sciences. This discipline, which offers tools required by both stock exchanges and quantum physics, is the subject of extensive and varied academic research, of which Duminil-Copin's work is a perfect illustration, as is that of Alice Guionnet, who will be a plenary speaker at the 2022 ICM, a rare honor for members of the mathematical community.

The specialty of the new medal winner is probability as it relates to physics. He is especially interested in the Ising model, named after the German physicist Ernst Ising (1900-1998). "The model helps understand ferromagnetism," Duminil-Copin explains. Ferromagnetism is a mechanism by which a material can be attracted by magnets, or can become one itself. "In this model, magnets are seen as consisting of dipoles, a kind of minuscule magnets pointing toward the north and south," he adds. The dipoles are arranged in a random configuration whose probabilistic properties we study. The most natural question is determining whether a system or a material behaves like a magnet or not. However, and this is what's very interesting, the answer depends on the temperature."

Materials that are magnetic...or not

Variations in temperature produce phase transitions, in other words a change in state, which has a direct impact on the physical properties of materials. The system can thus shift from a ferromagnetic state to spontaneous magnetization, a paramagnetic state in which magnetization occurs only in the presence of an external magnetic field. This phenomenon, discovered by Pierre Curie, is very well described by the Ising model, which has provided numerous results for nearly a century. However, they are far from describing all situations.

"These results are chiefly obtained on the planar model," Duminil-Copin confirms. "That is why I decided to study the Ising model in three dimensions, which matches the real conditions of magnets, as well as in four dimensions, the fourth dimension being time. This allows for connecting the Ising model to quantum field theory." The latter combines principles from electromagnetic fields and quantum physics. 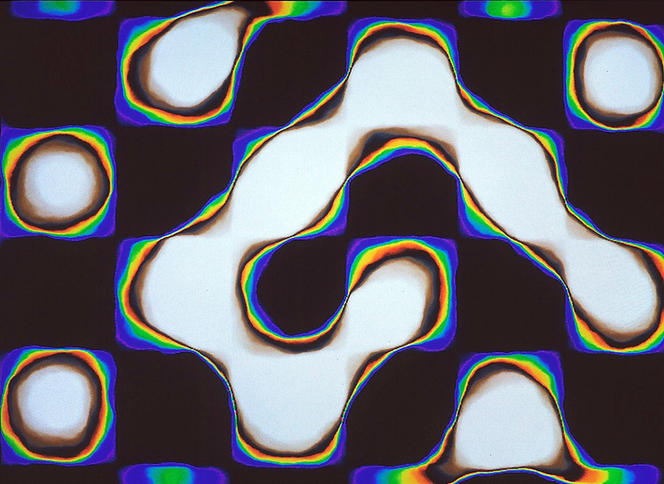 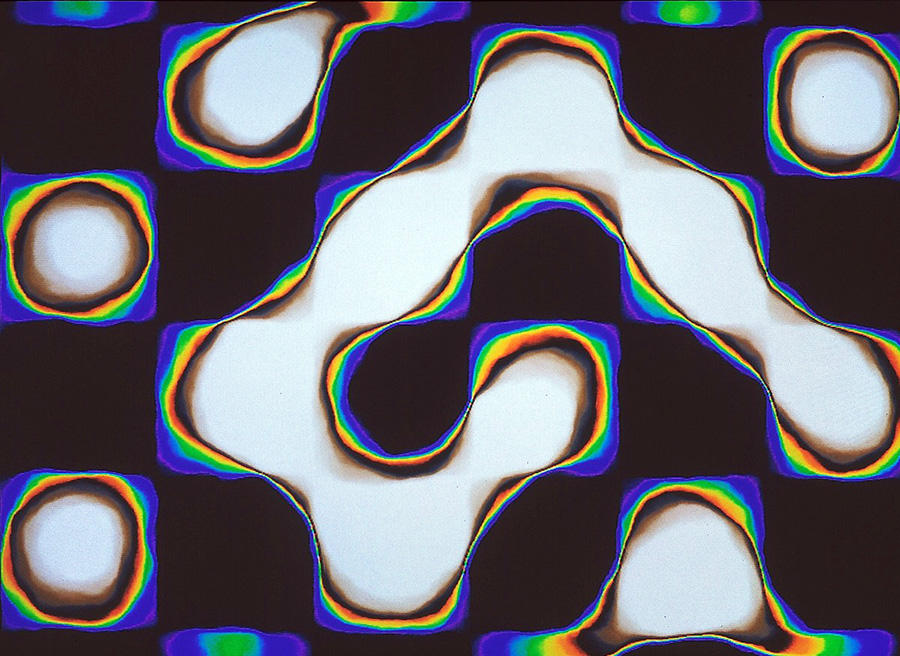 But let us stay in a world with three dimensions, in which Duminil-Copin's research has made it possible to identify phase transitions. The latter can be continuous, which is to say magnetization decreases gradually until it reaches zero at the critical point, or discontinues, in which case the properties change suddenly at certain . With Michael Aizenman and Vladas Sidoravicius, Duminil-Copin showed that in three dimensions, the Ising model presented a continuous phase transition, an advance that provides theoretical and therefore solid confirmation of experimental observations!

"The study of phase transitions helps to better understand the properties of materials," affirms Duminil-Copin, who has sixty collaborators, an extraordinary number for the discipline that reflects his desire to share, and to connect people and ideas. I'm not motivated by applications, but with the elegance of ideas and the beauty of problems. I let ideas fly, and maybe someone will transform them to develop applications. I prefer leaving that part to those who know how."

Before topics relating to phase transitions, Duminil-Copin began by working on self-avoiding walks with his research director Stanislav Smirnov, Professor at the University of Geneva, and winner of the 2010 Fields medal. This involves random walks in which each new step is made in a random direction (which explains why they are also called "drunkard's walk"), but with the particularity that one cannot pass through the same place twice. Duminil-Copin and Smirnov studied these unusual walks on hexagonal networks in particular. 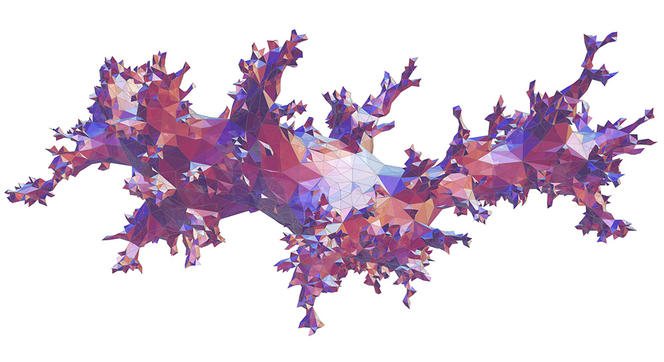 3D representation of a planar random graph. The graph represents the distances as faithfully as possible. We then see a "Fractal" structure emerging. 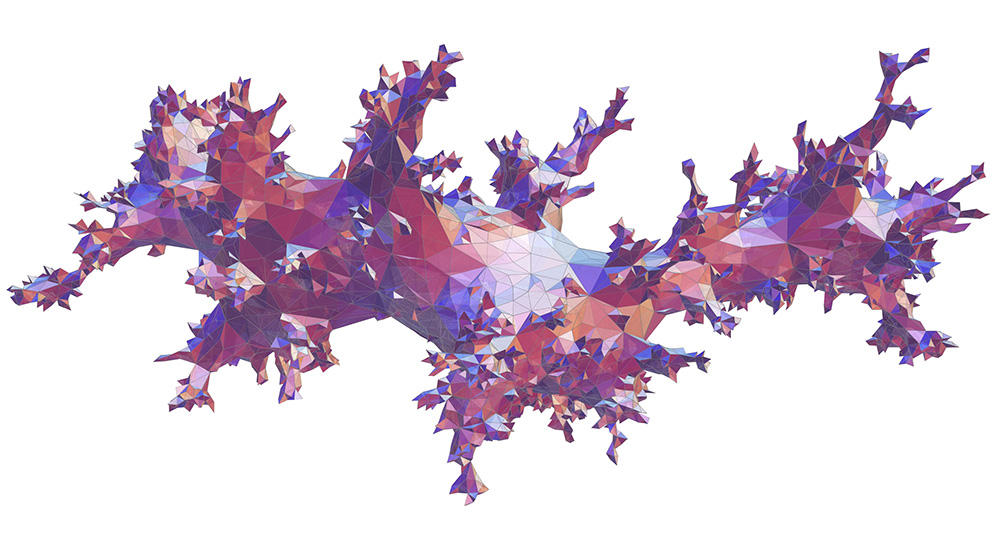 Duminil-Copin also worked on the theory of percolation, namely modelling the porosity of materials to understand whether a gas or fluid can pass through them, for instance in a gas mask. The material is represented as a random labyrinth, which is modelled in the form of a random graph, each of whose represents a tunnel that a fluid could enter into. The more the random graphs are connected, the more tunnels there are allowing a liquid or gas to pass through. This involves questions of phase transitions, between states in which the edges are more or less open. "Percolation models are essentially based on independent edges, but I am working on developing a theory with edges that are not," he adds.

One thing is certain, the various research areas of the recent winner of the Fields Medal reveal his taste for physics. "I always liked physics, and for a long time hesitated between the two. Then I found, almost randomly and thanks to probability, a field at the intersection between physical intuition and mathematical rigour. It is a fine synergy between two ways of proceeding." The approach shared with other researchers reveals how much probabilities and physics are closely linked today.

A discipline very close to physics

The specialist in the history of probability, Laurent Mazliak, Associate Professor at Sorbonne Université and a member of the Laboratory of Probability, Statistics, and Modelling,2 agrees. One has to go back to the early nineteenth century to identify a foundational event for the discipline. "Pierre-Simon de Laplace became its figurehead in 1812 with publication of his Analytical Theory of Probability," points out Mazliak. "He laid the foundations for a probabilistic theory that was still very fragmentary."" Mazliak dates its connection with physics to the early twentieth century, especially the interwar period, when the rise and evolution of physics gave it an appetite for probability and statistics. The connections have never weakened, as demonstrated by Duminil-Copin's work, or that of Nicholas Curien.

"Quantum mechanics is intrinsically random," says Nicholas Curien, Professor at l'université Paris Saclay and a member of the Orsay Mathematics Laboratory.3 "Einstein used to say that God does not play dice, but randomness does indeed have an important role. The field of probability today has incidentally helped improve demonstrations for much older research in theoretical physics."

Curien specialises in the geometry of large random graphs. This discipline has flourished recently, as it allows for modelling and studying large networks, such as the Internet and social media. Regular applications involve extracting information from networks, such as inferring, for the purposes of advertising, a user's tastes and ideas based on his or her connections.

"I'm more interested in graphs from theoretical physics, or graphs that for instance represent quantum gravity in two dimensions," Curien stresses. "These graphs are less dense than those for social media, I could even draw them on a sheet of paper without their edges meeting !"

"I am trying to understand universality in particular," he goes on. "Many models lose their properties when they become too large and change scale. An enormous amount of discrete models converge toward a single continuous model. I try to establish how this universality falls into place. The archetypical example for this phenomenon is Gauss's law, or normal distribution."

It is this law, which is central to statistics and probability, that governs how values are distributed around the average. The larger the sample, the more extreme values are offset by results close to the average. "Statistics are probabilities backwards," says Curien with amusement. "In probability, we know the distribution, and see its properties. In statistics, we have the data and we try to work backwards to the distribution that gave rise to them. Probability has become a mature discipline, which sustains itself. Its internal problematics have spread widely with the rapid expansion of machine learning and statistics based on probability."

From space to the stock exchange

The rise in recent decades of powerful computing concepts and tools has enabled probability to extend into all scientific fields, to the point of giving birth to entire disciplines, such as the emergence of financial mathematics. It is this very transformation that prompted Mazliak to set aside equations to more closely study the history of mathematics and probability. He had previously worked on optimization and stochastic control. This involves using differential equations, which describe the dynamic of a parameter, in which a degree of randomness is taken into account. 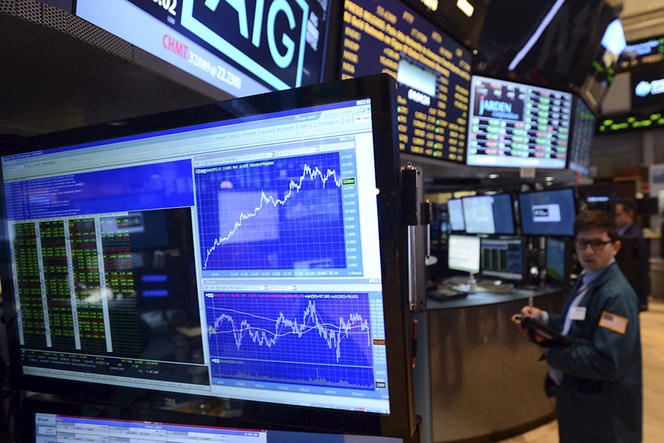 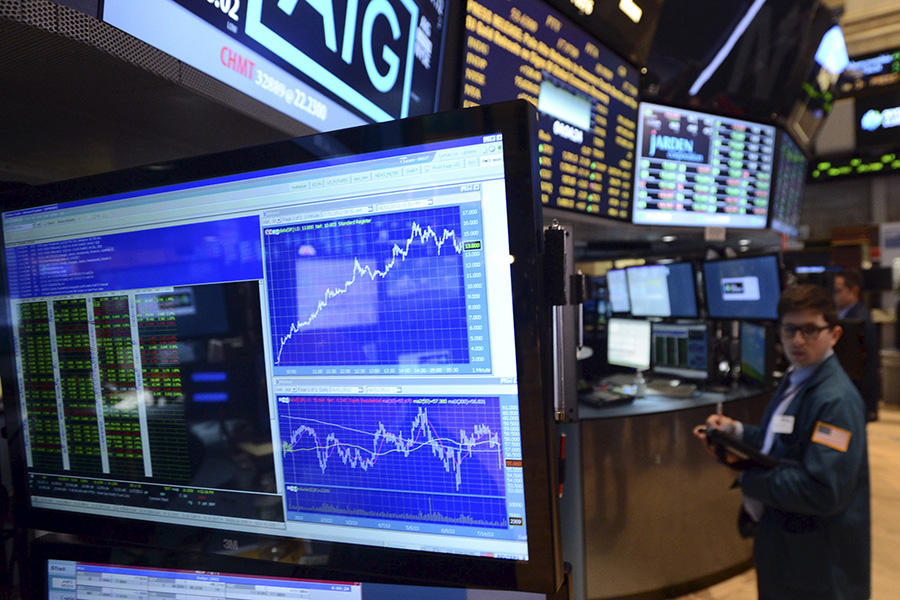 "If I want to send a rocket to the moon, I want it to get there, but I also want to do so with minimal fuel costs," adds Mazliak by way of illustration. "I can perform this optimization by adding disturbances to the trajectory, modelised by a random process, which adds difficulty to the model's processing. Behind this is a mathematical theory for finding optimal control methods and conditions, born around the Second World War to help with early remote control and programming."

"Stochastic control was applied to manage portfolios, all while taking random changes to the stock exchange into account," Mazliak continues. "The discipline at the same time benefited from the financialisation of the economy and its deregulation in the early 1980s, especially in the United States. This became a tidal wave in the 1990s, which is when I incidentally changed my path as a mathematician, to focus on understanding how a scientific community, in the space of a few years, became so fascinated with how the stock exchange worked. A fascination that incidentally led to significant mathematical advances."

Researchers have never stopped finding new and more fundamental applications and explorations. However, this success has not always extended to all of society. "Probability is a mathematical notion that must be better understood by the general public," Curien concludes. It is everywhere now, including in the surveys that the media floods us with. It is important to grasp its principles so as not to fall for fallacious reasoning and probabilistic paradoxes." Let us hope that the light shined on the research conducted by the new winner of the Fields Medal contributes to this public interest goal.