Astronomers think GRB 221009A represents the birth of a new black hole formed within the heart of a collapsing star. As illustrated here, the black hole drives powerful jets of particles traveling near the speed of light. The jets pierce through the star, emitting X-rays and gamma rays as they stream into space.
Nasa / Swift / Cruz deWilde
Share
Share
The astrophysicist Jean-Luc Atteia explains why the exceptional gamma-ray burst detected in early October could dramatically change what we know about supernovae and black holes.

Since 9 October, the gamma-ray burst GRB 221009A has been causing quite a stir in the astronomical community. What's so unusual about it?
Jean-Luc Atteia:1 This is one of the brightest and closest gamma-ray bursts ever observed, so much so that it saturated most Earth-based and orbiting detectors. For several seconds, GRB 221009A's luminosity exceeded that of a thousand million billion suns. It's a good thing it was so far away! The burst came from a galaxy in the constellation Sagitta located 1.9 billion light-years from Earth, whereas previously observed long bursts originated in stars some ten billion light-years away. It will therefore enlighten us about galaxies that are closer than usual. Above all, this gamma-ray burst was seen by countless devices, telescopes, detectors and research teams, triggering interest the world over. It offers a unique opportunity to bring together researchers and resources, and I'm convinced that it will provide a wealth of information about these fascinating phenomena.

So just what are gamma-ray bursts?
J.-L. A.: Gamma-ray bursts are extremely violent phenomena that usually occur at the end of a star's life. They are often classified on the basis of their duration: short gamma-ray bursts last only between ten milliseconds and one or two seconds, while long events can take up to a quarter of an hour. And then there are so-called ultra-long bursts that can last as much as several hours, although these are still very poorly understood. With GRB 221009A, we are looking at a long gamma-ray burst, which is triggered when a very massive star with a rapidly-rotating core runs out of fuel. This causes a black hole to form, into which the star's core then falls. The fast-spinning core is abruptly slowed down, while the black hole swallows an amount of matter equivalent to several tens of thousands of times the mass of the Earth every second. As a result, a phenomenal amount of energy is immediately released, although it has difficulty getting out of the black hole due to the huge amount of matter being sucked into it. However, the energy manages to escape in the form of two jets of matter and gamma rays, which give rise to the gamma-ray bursts. These can only be spotted if one of the two jets is in the Earth’s line of sight, and it is therefore estimated that we only detect between 0.2 and 1% of the gamma-ray bursts that occur in the Universe. The supernova produced by the explosion of the outer layers of the dying star can sometimes be observed a few days after the burst. 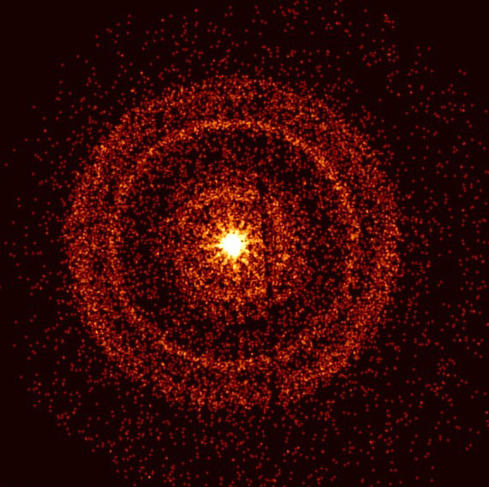 Swift’s X-Ray Telescope captured the afterglow of GRB 221009A about an hour after it was first detected. The bright rings form as a result of X-rays scattered by otherwise unobservable dust layers within our galaxy that lie in the direction of the burst. The dark vertical line is an artifact of the imaging system. 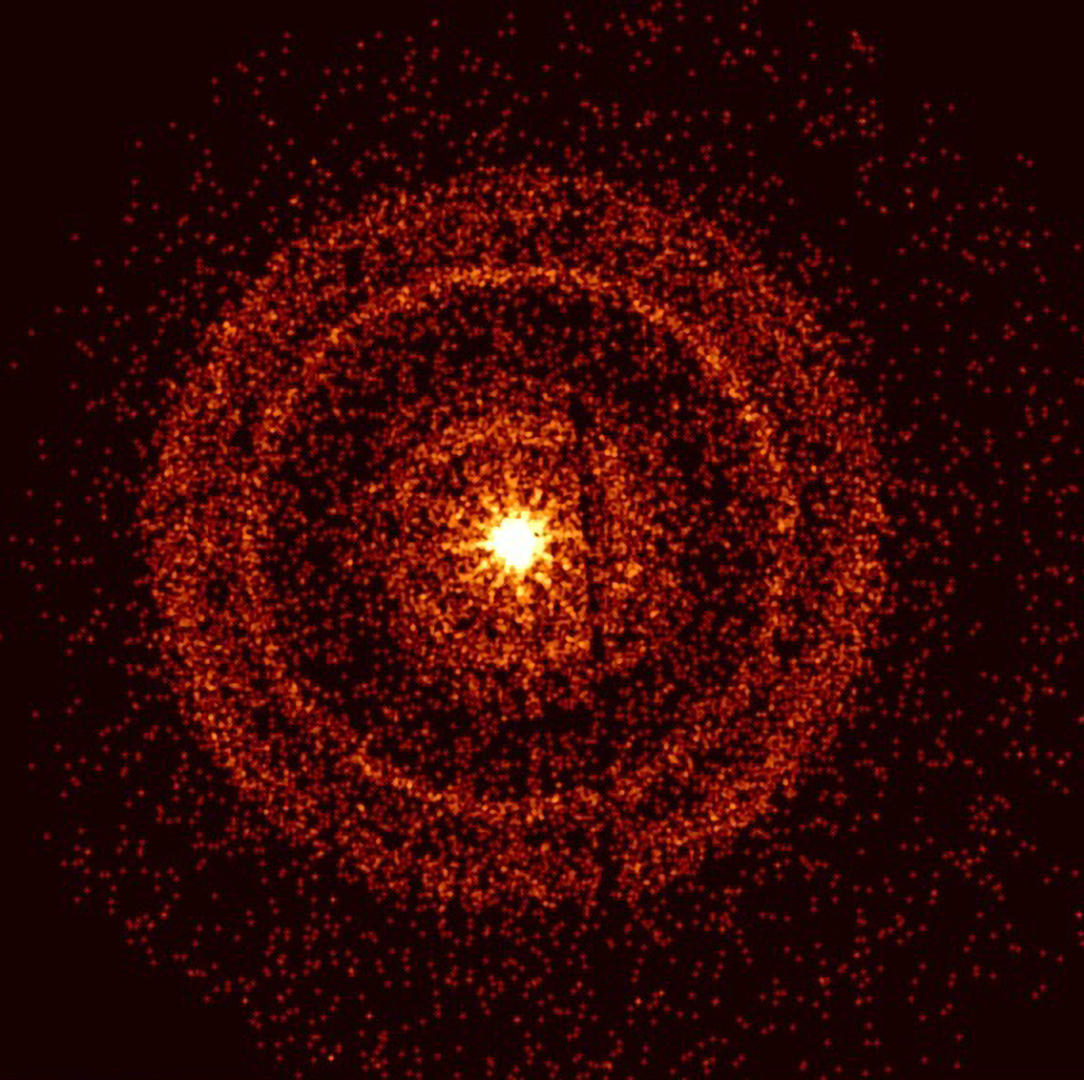 Swift’s X-Ray Telescope captured the afterglow of GRB 221009A about an hour after it was first detected. The bright rings form as a result of X-rays scattered by otherwise unobservable dust layers within our galaxy that lie in the direction of the burst. The dark vertical line is an artifact of the imaging system.
Nasa / Swift / A. Beardmore (University of Leicester)
Nasa / Swift / A. Beardmore (University of Leicester)
Share
Share

What's so interesting about gamma-ray bursts?
J.-L. A.: We study gamma-ray bursts because they are practically the only signals we have of the formation of black holes. They also shed light on the very complex physics that takes place in relativistic jets, which travel almost as fast as light. Although only gamma-ray flashes were initially observed in these bursts, over the past twenty-five years researchers have noticed that the phenomenon is accompanied by a wider range of radiation, such as infrared and X-rays, produced when the jet slams into the surrounding gas.
Another useful thing about gamma-ray bursts is that they occur throughout the Universe and emit light so bright that it can travel through several galaxies. During this process, some wavelengths of this light are absorbed by the matter they encounter. This enables us to find out more about the composition of galaxies that are too distant to be studied directly, as well as that of the intergalactic medium. While many satellites, such as NASA's SWIFT Space Telescope, are specially equipped to study gamma-ray bursts, other systems can detect them even when this is not their primary function. In fact, I'm involved in the French-Chinese SVOM2 mission, one of whose cameras will be dedicated to gamma radiation. However, studying gamma-ray bursts is complicated since we currently have no way of predicting where and when they will occur. 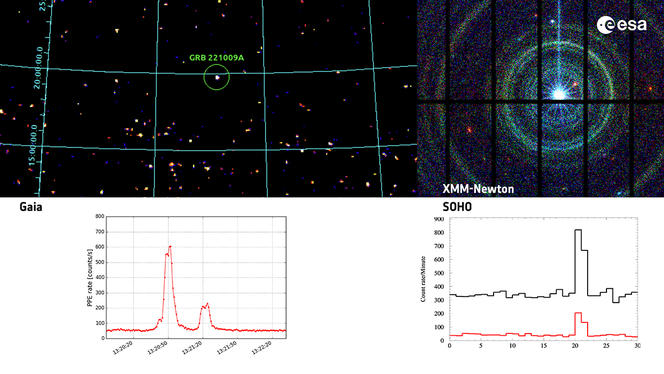 A gamma-ray burst is a super energetic explosion and this one originated in the constellation Sagitta. The signal of the burst – called GRB 221009A – was picked up by many ESA observatories. 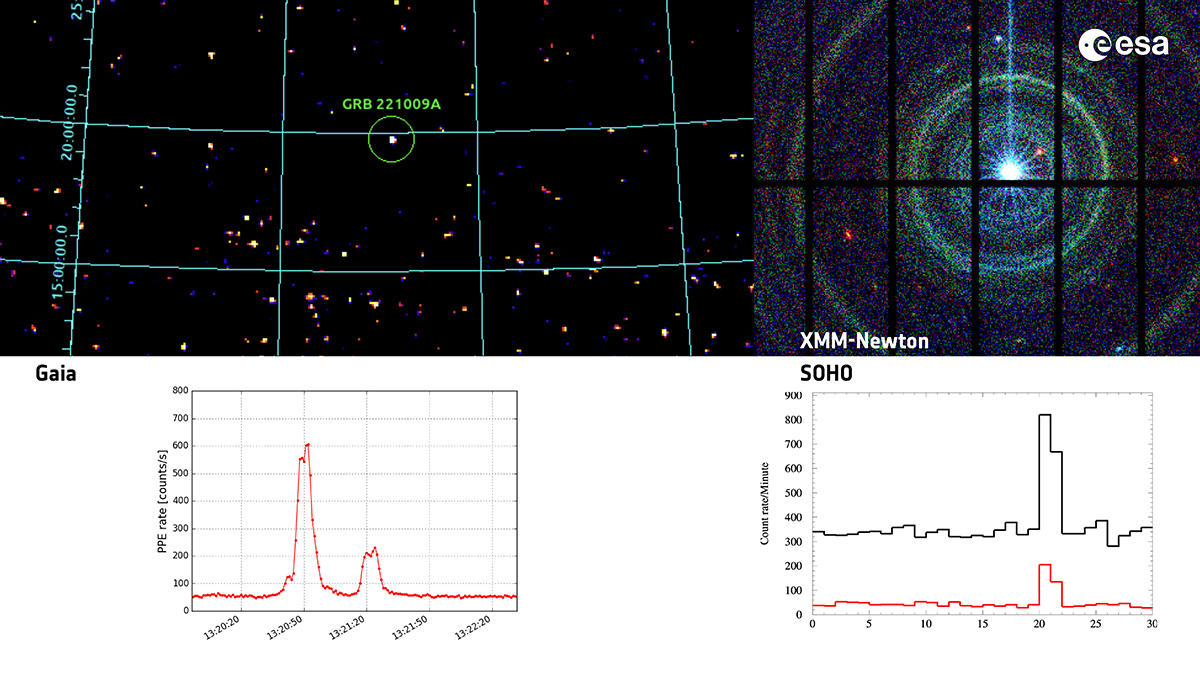 What else can we learn from this burst?
J.-L. A.: The fact that it was so close made us realise that this phenomenon is more complex than thought. We usually only see the peak of the gamma-ray burst, which lasts ten to twenty seconds. However, this time we also observed a precursor burst about three minutes earlier, as well as a fading emission well after the peak. But what particularly intrigued researchers is that the gamma-ray burst was also detected by very-high-energy photon detectors, which was totally unexpected. Cosmic radiation of this kind is not supposed to be able to travel such long distances from the exploding star, which poses some serious questions about the physics involved.  One possible explanation put forward is that these photons might be secondary particles emitted by cosmic rays accelerated in the jets from the burst. This would show that, like supernovae, gamma-ray bursts are sources of cosmic rays, which are high-energy accelerated particles, mainly protons and some nuclei. However, very few celestial objects and events are able to provide them with the required energy.
A lot of research work is being carried out in an effort to elucidate the origin of cosmic rays. Some come from our own Galaxy, mainly from supernovae, while others originate in active galactic nuclei. However, all the sources have not been identified. Knowing whether or not gamma-ray bursts can emit very-high-energy cosmic rays would help us to improve these models, which are still in the process of being developed.

Cosmic ray sources are also sources of neutrinos, which, however, are only slightly slower than cosmic and gamma rays. The difference might seem tiny, but over such distances this would mean that any neutrinos emitted by this gamma-ray burst would reach the Earth in several years' time. So this will need to be monitored, for instance by neutrino detector facilities such as IceCube, located at the Amundsen-Scott scientific base at the South Pole, and KM3NeT,3 which is currently under construction on the bottom of the Mediterranean Sea. Gamma-ray burst GRB221009A might therefore turn out to be a sort of Rosetta Stone that could make it possible to decipher the physical processes at work in such events.

Article
Probing the hidden side of thunderstorms