Home / Articles / Probing the hidden side of thunderstorms

Probing the hidden side of thunderstorms

Home / Articles / Probing the hidden side of thunderstorms

Probing the hidden side of thunderstorms

Artist’s impression of the TARANIS satellite observing elves.
CNES/ill./SATTLER Oliver, 2012
Share
Share
The TARANIS satellite is scheduled to launch from Kourou (French Guiana) in November in order to study the luminous phenomena that occur above thunderstorms. The objective of the French mission, which will for the first time carry out an exhaustive, long-term analysis of these events, is to improve existing understanding of their impact on our planet’s upper atmosphere.

In the Gallic Celtic mythology, Taranis was the god of the sky, thunder and lightning. So it only made sense that the French Space Agency CNES would assign the name of this deity to a satellite dedicated to the study of luminous phenomena associated with thunderstorms. Already postponed several times, the TARANIS (Tool for the Analysis of RAdiation from lightNIng and Sprites) satellite is scheduled to launch from the Kourou Space Centre in French Guiana this coming November. Once placed in a sun-synchronous orbit at an altitude of some 700 km,1 the satellite’s mission will be to study the impulsive transfers of energy that take place above thunderstorms, at the boundary between Earth’s upper atmosphere and the space environment. 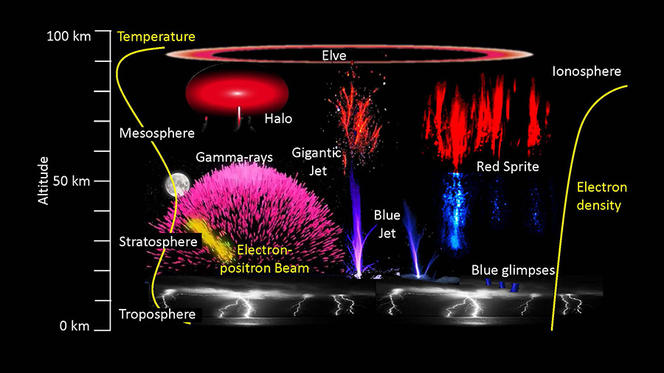 Illustration of the principal energy phenomena caused by thunderstorms in the upper atmosphere. 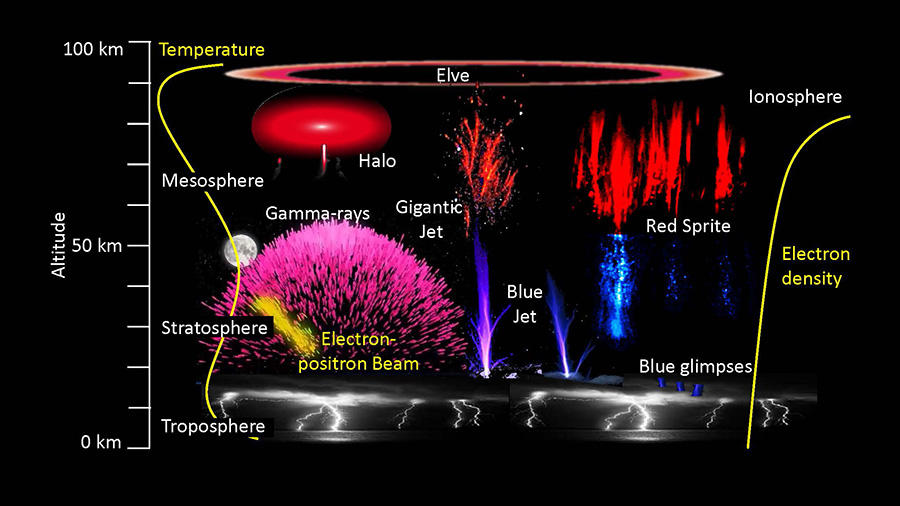 "TARANIS will be dedicated to tracking not only a wide variety of luminous phenomena known collectively as transient luminous events (TLE), but also brief bursts of gamma radiation from Earth called TGFs (Terrestrial Gamma ray Flashes), during which a thunderstorm behaves like a particle accelerator," explains Jean-Louis Pinçon, a CNRS researcher at the Laboratory of Physics and Chemistry of the Environment and Space (LPC2E)2 and the project leader for the mission.

The very first TLE was spotted on a summer evening in 1989. The completely accidental discovery was made by researchers at the University of Minnesota (US) who were trying to test the sensitivity of a new model of camera that was to be installed on a sounding rocket. To do this, the team pointed the device at a star of known brightness from a ground-based vantage point, without realising that the star targeted that night was located immediately above a thunderstorm. Once back in the lab, the scientists were astounded to discover that their camera had captured images of strange flashes of light above the storm clouds. This turned out to be the first-ever image of a sprite. 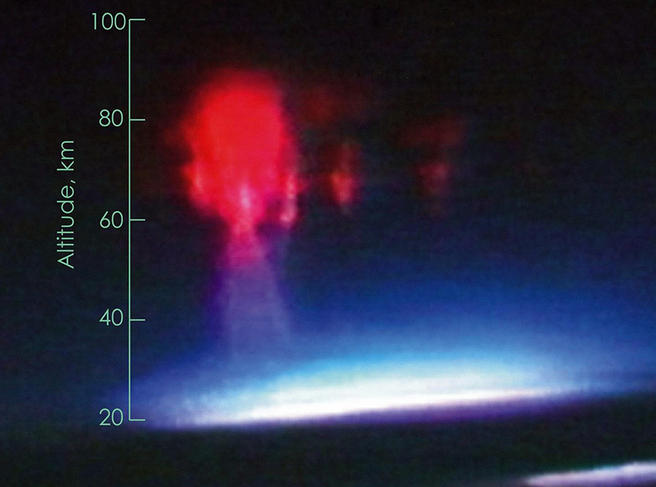 The first-ever colour photograph of a sprite, taken at an altitude of 95 km on 4 July 1994. 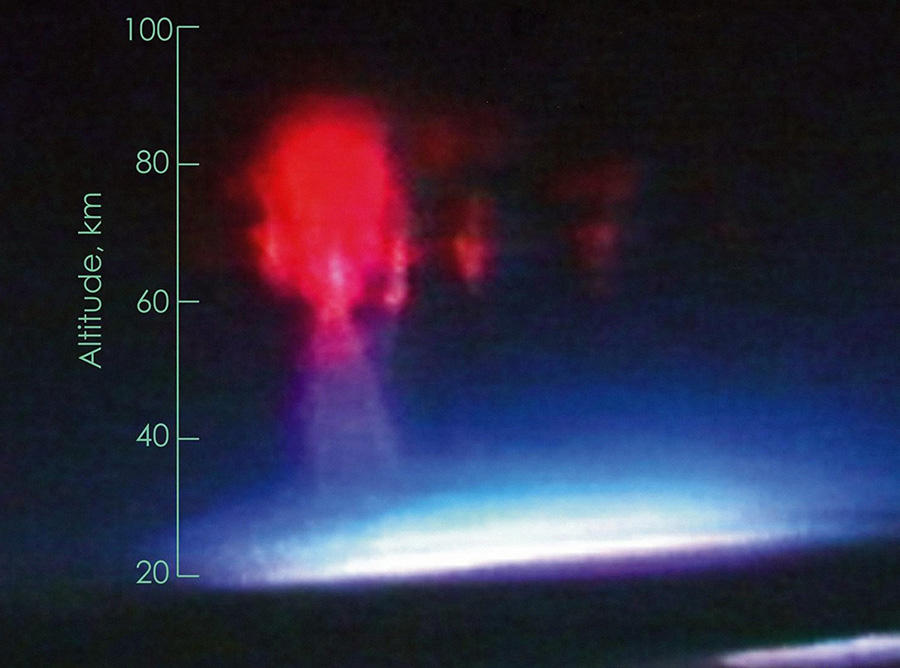 In the 1990s, three other categories of transient luminous event connected with thunderstorms were identified: elves, characterised by an expanding ring of light formed around 100 km above the ground; blue jets, which as their name suggests, form bluish plumes; and the rarer and more spectacular gigantic jets that appear at altitudes of 15 to 90 km. “Although it is estimated that several hundred thousand TLEs occur in the upper atmosphere every day, they can only be seen from the ground from a high viewpoint and a long way from the thunderstorm activity, because the thundercloud makes it impossible to see them,” Pinçon explains. “This distance, together with absorption by the dense layers of the lower atmosphere, makes it very difficult to obtain relevant data from the Earth’s surface for the study of the microphysics of these phenomena.”

A microsatellite packed with instruments

Placed in an orbit several hundred kilometres above the clouds, TARANIS will therefore be able to collect far more accurate and exhaustive data about these events. To elucidate these puzzling phenomena, the 180 kg microsatellite will carry six different scientific experiments.3 Made up of two cameras together with four photometers, the MCP (MicroCameras and Photometers) experiment will be entirely dedicated to characterising TLEs according to the wavelength of their light spectrum, as well as the thunderstorms that cause them. 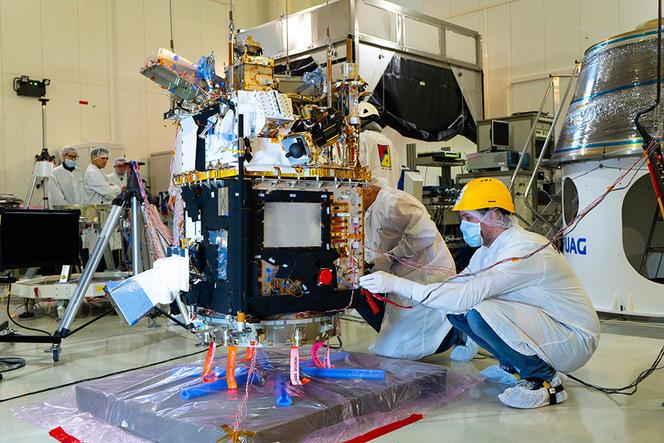 Final tests for the launcher of the TARANIS satellite in a clean room at the Toulouse Space Centre. 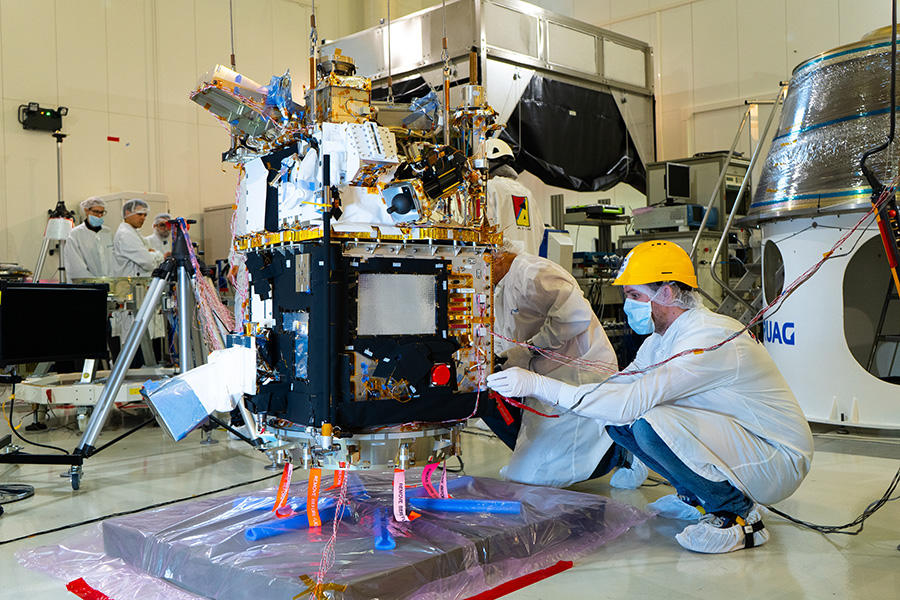 The gamma-ray detector XGRE (X-ray, Gamma-ray and Relativistic Electrons) will determine the various components of terrestrial gamma-ray flashes. “Unlike existing gamma-ray detectors, which were designed to identify distant sources of cosmic radiation, XGRE is so rapid that it will be able to detect even the tiniest amount of light from thunderstorms forming a few kilometres above the Earth’s surface,” Pinçon points out. In addition to this ultra-rapid instrument, the satellite will be equipped with high-energy electron detectors, as well as sensors to measure electric and magnetic fields and record the characteristics of the particles associated with TLEs and TGFs. “All these instruments are specifically designed to operate simultaneously and synchronously so as not to miss any of the features of these events, which can last less than a thousandth of a second,” the researcher adds.

An unprecedented mass of information

Orbiting the Earth fourteen times a day, TARANIS will be able to identify hundreds of events related to impulsive energy transfers every day, while recording their physical characteristics and the context in which they occur. By the end of the mission, scheduled for late 2024, the satellite will therefore have amassed an unprecedented amount of information about transient luminous events and terrestrial gamma ray flashes. 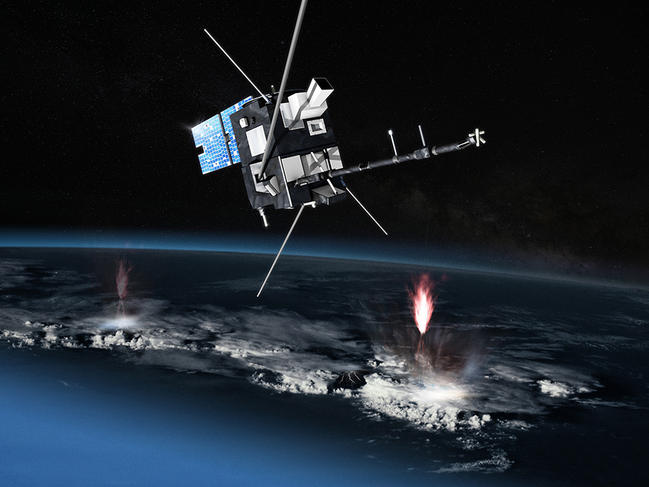 Illustration of the TARANIS (Tool for the Analysis of RAdiations from lightNIngs and Sprites) satellite. Part of the CNES’s Microsatellite programme, Myriade, TARANIS is dedicated to the study of the impulsive transfers of energy between Earth’s atmosphere and space environment observed over thunderstorm regions. 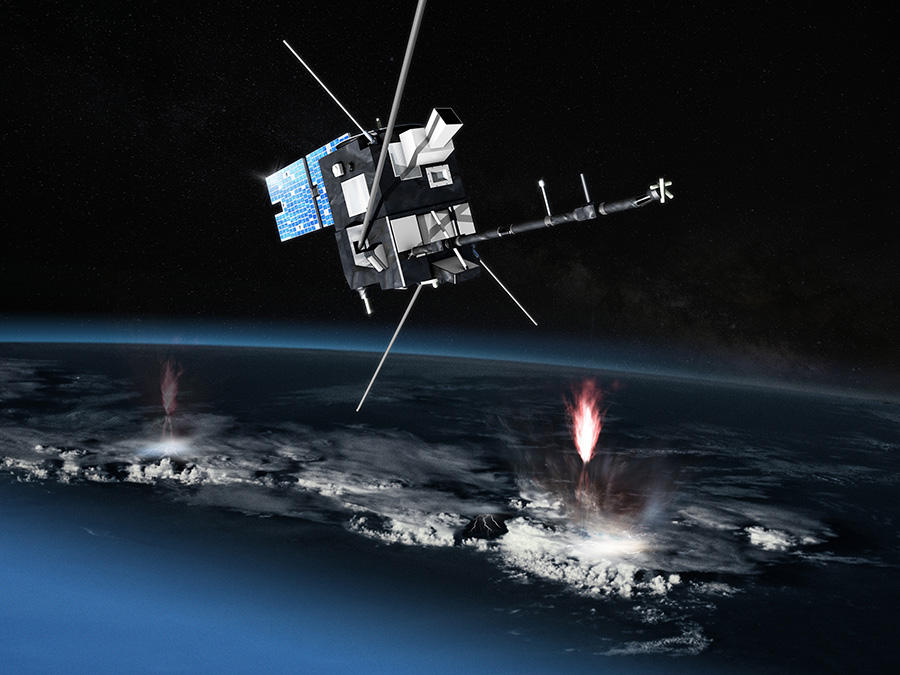 Illustration of the TARANIS (Tool for the Analysis of RAdiations from lightNIngs and Sprites) satellite. Part of the CNES’s Microsatellite programme, Myriade, TARANIS is dedicated to the study of the impulsive transfers of energy between Earth’s atmosphere and space environment observed over thunderstorm regions.
CNES/ill./SATTLER Oliver, 2012
CNES/ill./SATTLER Oliver, 2012
Share
Share

Once analysed, the data will help to clarify the mechanisms that generate them, as well as the electromagnetic signatures and various particles involved in such processes. “By comparing the information collected by TARANIS at the nadir of the thunderstorms with that obtained in parallel by ground-based observation networks, we will be able to determine in which circumstances and with what intensity these events and the physical mechanisms that underpin them can affect the chemical composition and dynamics of the upper atmosphere,” Pinçon concludes.

Article
Artemis: To the Moon and beyond
Meteorology