Turning CO2 into a Valuable Resource

Turning CO2 into a Valuable Resource

To "clean" the atmosphere of excess CO2, researchers are exploring alternatives to simple capture and storage.
Spectral-Design/FOTOLIA.COM
Share
Share
To curb the amount of CO2 present in the atmosphere, researchers would like to use it to produce polymers, fuel, or even construction materials. Game on!

In 2014, a trifling 36 billion tons of CO2 were released into the atmosphere as a result of human activity. This unprecedented concentration must be drastically reduced if the rise in the Earth's temperature is to be limited to 1.5 °C by the end of the century, as agreed by the countries present at the recent COP21 Conference in Paris. Although the primary solution is and will remain the reduction of greenhouse gases at the source, other avenues are being explored to "clean" the atmosphere of its excess CO2. Geological sequestration is one of them, but the option that has captured researchers' attention is far more unconventional, as it involves nothing less than considering atmospheric CO2 as a new resource—in short, to use it as a raw material.

CO2 is already used as a component in Aspirin or eyeglasses lenses. Its annual consumption is of 150 million tons.

"In practice, industry already uses CO2  to produce urea, a common fertilizer that can also serve as a precursor for a number of plastics; salicylic acid, an active ingredient in aspirin and certain acne medications; or polycarbonates, the polymers found in CDs, DVDs, or eyeglass lenses," points out Marc Robert, a researcher at the LEM.1 "This represents a consumption of 150 million tons of CO2 each year. Now these uses must be taken further, and new ones need to be invented."

This would be done using "atmospheric" CO2. One method would consist in developing systems for CO2 capture in the ambient air, which is what Klaus Lakner, a researcher at the University of Arizona (US) is seeking to achieve with his CO2 "tree," a device for individual use that will not be deployed on a large scale for another two or three decades. Another more realistic technique would be to capture CO2 as it exits a factory's smokestacks, where it is the most concentrated. "Very effective capture processes for factory emissions already exist," points out François Guyot, a researcher at the IMPMC.2 "The principle involves dissolving the CO2, with its acidic pH, in base baths located on the smokestacks."

Once captured, the possibilities for transformation are plentiful, as the carbon atoms present in CO2 can in fact be found in numerous carbon molecules highly sought after by industrial actors. "We are able to use CO2 to produce carbon monoxide (CO), a base product with which the chemical industry develops more complex molecules," explains Robert. Enriched in hydrogen, CO makes it possible to obtain, for example, formic acid (H-COOH), a liquid compound at room temperature and pressure that could power the fuel cells of tomorrow's cars, and with less risk than the highly flammable pure hydrogen (H2). More complex to synthesize than formic acid, because it is a more reduced compound, methanol (CH3OH) represents another prospect for CO2; this alcohol, which is used as a solvent in paint, varnish, and ink, can also serve as a fuel, notably for rockets.

It will still take ten to twenty years before these processes can be industrialized.

However attractive, using CO2 to synthesize other carbon products on a large scale implies to overcome a number of obstacles. "The CO2 molecule is very inert," explains Robert. “Its carbon-oxygen bonds are extremely solid and require an enormous amount of energy to break, hence the considerable expense at the industrial level." Most importantly, these catalysis operations—for it is indeed catalysis—are based on the use of precious metals such as platinum, gold, silver, rhodium, iridium or ruthenium, which hinders their spread. Hundreds of laboratories across the globe are therefore striving to improve these catalytic processes, by making them less energy hungry and by testing non-precious metals. 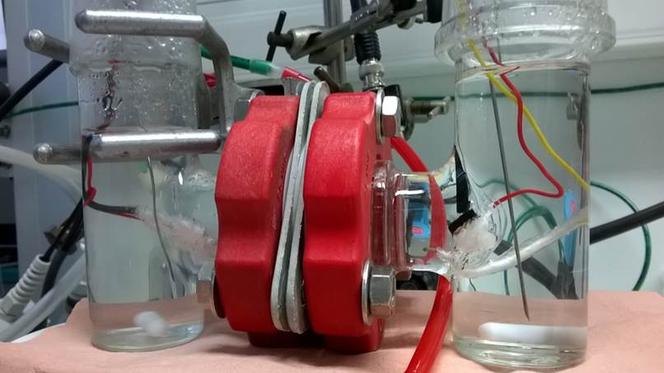 Here, catalysis of CO2 produces carbon monoxide (CO), a commodity that is widely used by the chemicals industry. On the electrodes, researchers replaced the precious metals used until now by iron-based compounds. 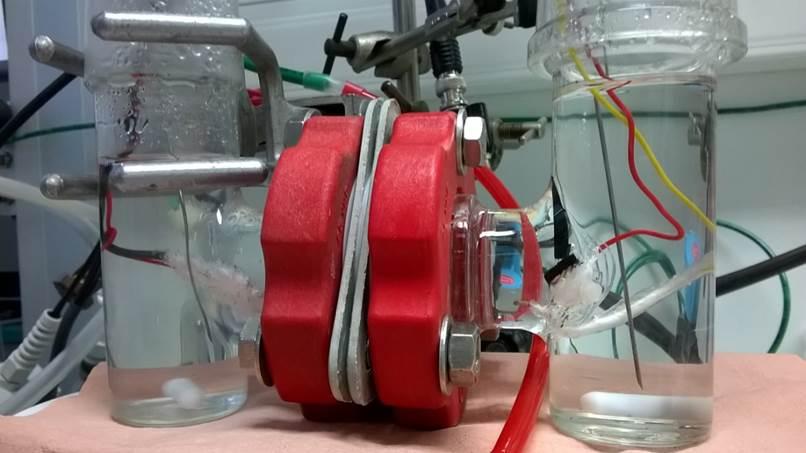 Robert and his team are striving to develop a catalytic process using iron, the most abundant metal in the Earth's crust. "At this point in time, we are able to produce CO from CO2, in a controlled manner, by using electrodes containing iron," he enthuses. "And we are able to do so by limiting the by-products resulting from the catalysis to a minimum, since we only obtain carbon monoxide in gaseous state, and liquid water." The beauty of the experiment is that all of the electricity required for the catalysis is provided by solar panels, which is a 100% renewable energy source. Other laboratories, notably Australian, have succeeded in producing a mixture of CO and formic acid with nickel electrodes. Processes using copper crystals directly produce methanol, but in small quantities and mixed with numerous other by-products. "It will take another ten or twenty years for these processes to be applicable to industry," Robert says.

The Holy Grail for researchers would be to produce hydrocarbons comparable in every way to those used today in cars or trucks, such as octane (C8H18). "Of course, their combustion would once again release CO2 into the atmosphere, but it would be recaptured and transformed again into fuel, and so on," explains Robert. Simply put, this would amount to creating a new—and virtuous—carbon cycle.

Nature as a source of inspiration

The needs of the chemical industry are a source of inspiration for scientists, although not the only one. Why not copy natural processes altogether by producing rocks from CO2? "Nature did not wait for us to use atmospheric CO2," explains Guyot. "It does so in two distinct ways: to generate biomass through photosynthesis, with plants using atmospheric CO2 and water to produce sugars and oxygen, and to create rocks, in the form of carbonates. An example of this process, called carbonation, built up over periods of thousands of years, can be found at sea: the chalk cliffs of Étretat (France) or Dover (UK)are entirely composed of calcium carbonates (CaCO3)! "The advantage of transforming CO2 into rocks is that it is extremely stable in solid form," explains the geologist. "There is no risk of finding it in the atmosphere."

The advantage of transforming CO2 into rock is that it is extremely stable in its solid form.

Creating rocks in the laboratory is the somewhat crazy challenge taken up by a French research consortium, as part of the Carmex project. "In nature, rocks are leached (washed) by rainwater, releasing calcium (Ca) along with iron (Fe) or magnesium (Mg), minerals that end up in oceans and subterranean water," explains Florent Bourgeois, of the LGC3 in Toulouse. "There they precipitate with the CO2 dissolved in water (in the form of CO3 ions) to produce calcium carbonate or calcite carbonate (CaCO3), iron carbonate or siderite (FeCO3), or magnesite (MgCO3), in the form of tiny solid residue."

The idea is to reproduce, and especially speed up, these natural geological processes by heating the mixture. "With our technique, we are able to produce 'pebbles' of approximately ten microns," specifies Bourgeois. "But to do so, the solution must be heated to 180°C and be under a few bars of pressure. This requires too much energy, which we are trying to reduce." CO2 storage in solid form is not the sole objective. "Carbonates are materials used in the production of cement, for example. The ones we artificially produce could also serve as construction materials," suggests Bourgeois, who is keen to involve construction professionals in his project. 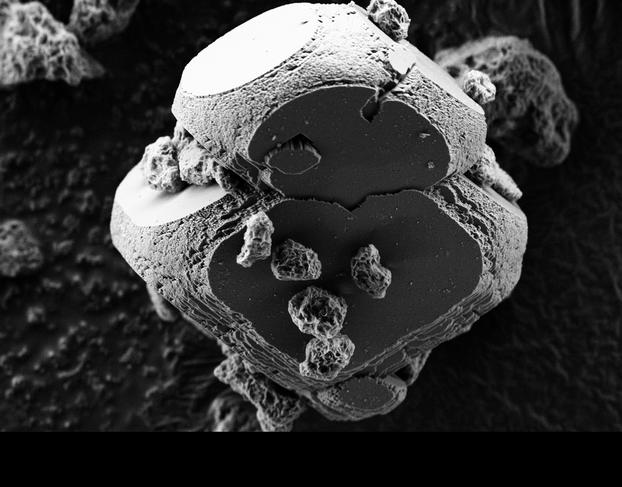 Manufactured in a laboratory, this "pebble," which measures tens of microns and is made of magnesium carbonate could be used in construction materials. 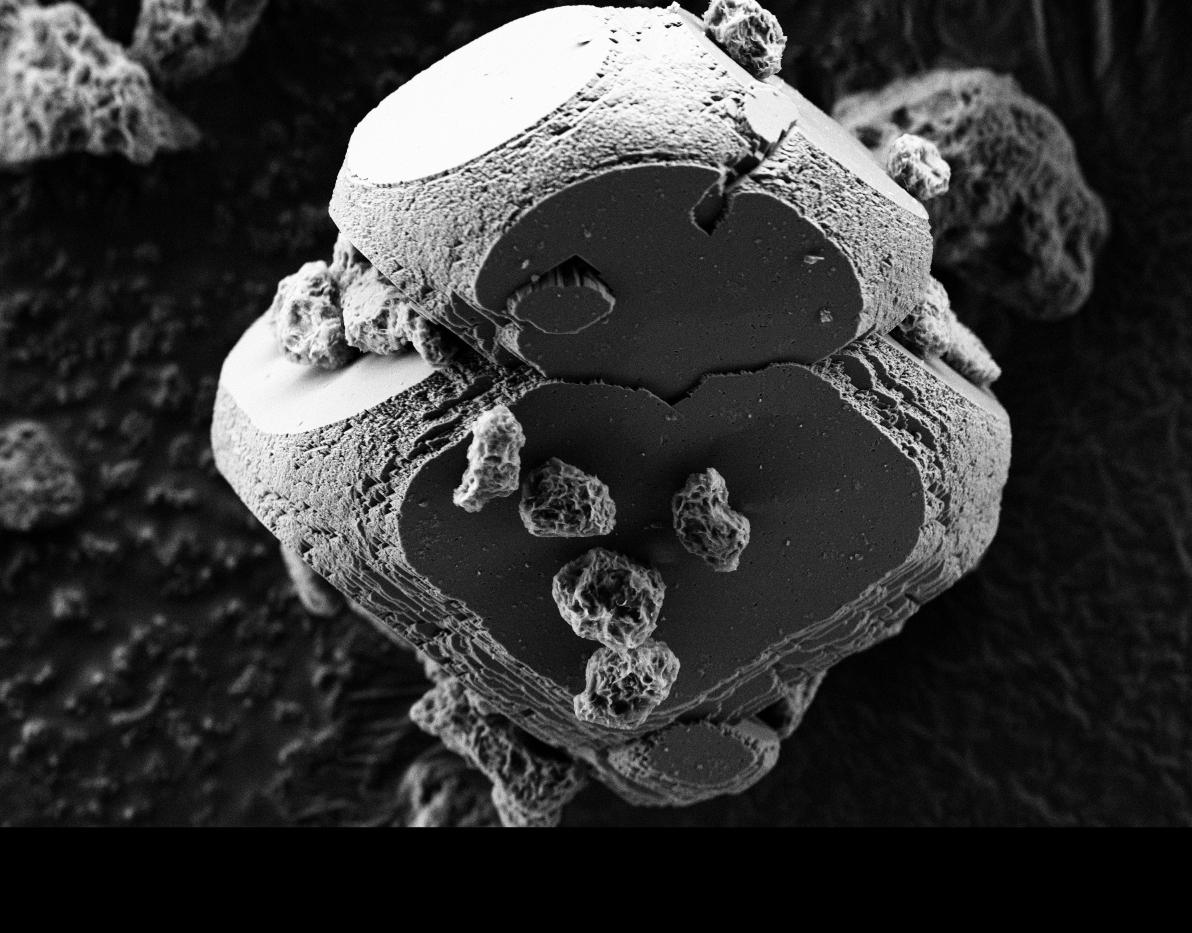 Manufactured in a laboratory, this "pebble," which measures tens of microns and is made of magnesium carbonate could be used in construction materials.
F. GUYOT/IMPMC
F. GUYOT/IMPMC
Share
Share

For this to happen, the price of a ton of carbon, an issue that scientists have no control over, needs to be overcome. Today, carbon costs no more than 8 or 10 euros per ton, which is about the price of its extraction from the subsoil. "For the capture and reuse of CO2 to be of interest to industrial actors, the price of carbon must be in the region of 80 euros per ton," says Guyot. We will have to wait a few more years before driving on atmospheric CO2, or living in a carbon-built high-rise.

Slideshow
Mercury in the Air
Environment

Opinion
Can we Create Environmentally-Friendly Plastics?

Article
In Arizona, a Miniature Earth under a Dome
CO2

Article
In Arizona, a Miniature Earth under a Dome