This is the First-Ever Image of a Black Hole

This is the First-Ever Image of a Black Hole

The EHT collaboration
Share
Share
After tracking it for five nights, scientists have revealed to the world the image of a supermassive black hole in the heart of the M87 Galaxy. A picture obtained by the international collaboration Event Horizon Telescope. A historical moment.

Our group has stayed outside so as to enjoy the scenery. And despite the bitter cold, the view is well worth it. In the distance, the partially snow-covered foothills of the Sierra Nevada stand out against the brilliant blue sky, forming a staircase whose steps descend to the haze-shrouded plain that is home to the city of Granada. Just in front of us, a large part of the horizon is hidden by a massive white dish, the vast antenna of a radio telescope that has helped to unravel one of the Universe’s greatest mysteries.

"This is the IRAM 30-metre telescope that helped to generate the very first image of a black hole," proudly announces Frédéric Gueth, CNRS researcher and Deputy Director of the IRAM,1 as he heads towards a door at the base of the huge facility. For it was here in April 2017, at an altitude of 2,850 metres on the slopes of Andalusia’s Pico Veleta, in southern Spain, that was collected part of the four petabytes of data used to produce the extraordinary image unveiled today by the “Event Horizon Telescope” (EHT) international collaboration. The image shows a bright ring surrounding a dark, circular region: this is nothing less than the shadow of M87*, the super-massive black hole that lies at the centre of the M87 galaxy. 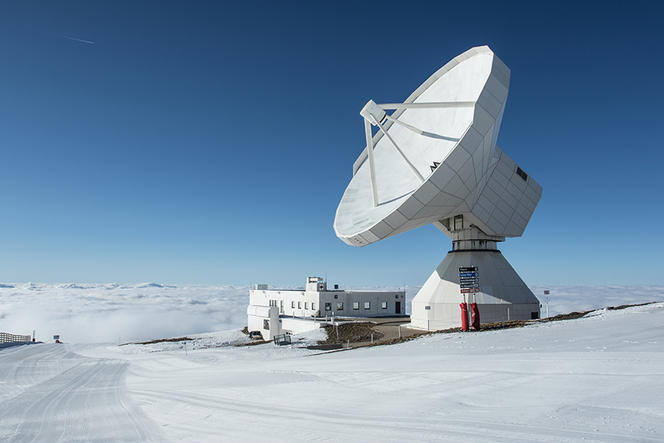 The 30 m radio telescope of the Institut de Radioastronomie Millimétrique, located in the Sierra Nevada in Spain, is one of 8 observatories whose data made it possible to obtain the image of the M87* black hole. 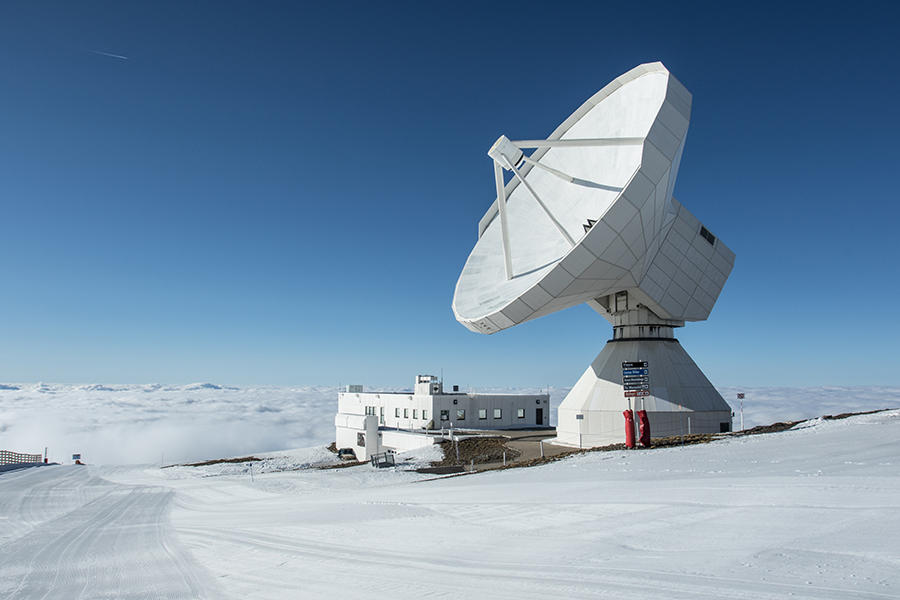 The 30 m radio telescope of the Institut de Radioastronomie Millimétrique, located in the Sierra Nevada in Spain, is one of 8 observatories whose data made it possible to obtain the image of the M87* black hole.
DiVertiCim
DiVertiCim
Share
Share

To understand the significance of this observation, we need to go back over a century, to the year 1915, when Albert Einstein set out his general theory of relativity. This showed for the first time that objects as massive as stars can, under certain conditions, collapse under the effect of their own gravity to form a region of space from which nothing, neither matter nor light, can escape: a black hole. Contrary to what was initially believed, such an object cannot be reduced to a point or singularity lost in the immensity of space. It is delimited by an intangible, invisible frontier called the “event horizon”, beyond which nothing can ever escape.

It is the existence of this event horizon surrounding a black hole that is evidenced by the image released by the EHT collaboration. The discovery, which is the subject of six articles in Astrophysical Journal Letters, also confirms, for the first time directly, the validity of Einstein's equations of general relativity in a regime of strong gravitational fields. However, getting to this point was no easy task.  As we enter the control room from where the huge telescope, which carries out observations in the millimetre-range of wavelengths, is operated on screens, Frédéric Gueth explains that “against the background of the sky, an event horizon looks like a perfectly black, somewhat flattened disc”. As such, telescopes would not be able to detect anything, except possibly a particular type of radiation theorised by the British physicist Stephen Hawking.

How to understand the image of a Black Hole

“Fortunately, black holes are rarely isolated stars,” the scientist notes. “Those observed in the centres of galaxies are located in regions that are rich in stars, dust and gas.” This matter orbits around the black hole, forming an accretion disc which, as it heats up, produces a characteristic type of intense radiation. However, as matter is torn away from this ring-shaped structure, it crosses the event horizon and becomes invisible. Eventually, this creates a dark region against a bright background, the “shadow” of the black hole.

Working out what the image of such an object would look like when seen by a distant observer is however not in the least intuitive. As early as 1979, Jean-Pierre Luminet, a young CNRS  researcher at the LAM,2 and the Paris Observatory,3 modelled it by taking into account the physical properties of the matter subjected to these infernal conditions and the way in which the structure of space-time — in particular the path followed by light rays as they pass through it — is affected by the gravity of the black hole. The image released by the EHT team shows the shadow of M87* with the disc tilted at an angle of around 60° and rotating clockwise. In the bright halo surrounding the dark central region an area can be seen that is brighter on one side only. This is characteristic of an image deformed by the presence of a black hole.

Computer model of a gas accretion disc around a black hole by astrophysicist Jean-Pierre Luminet. The strong curvature of space distorts the image of the disc, simultaneously showing the top and bottom.

Another problem that the scientists had to overcome was its size. This is due to the fact that when a black hole is derived from a typical massive star, its event horizon only delimits a tiny volume of space: a sphere barely a few tens of kilometres in diameter. Consequently, as Frédéric Gueth points out, “with today’s instruments, astronomers can only expect to detect the very nearest super-massive black holes”. And they thus have only two potential targets: Sagittarius A* (abbreviated to Sgr A*), an object of 4.14 million solar masses located at the centre of the Milky Way, 26,000 light years from Earth; and M87*, a giant of 6.5 billion solar masses, which lies at the core of the elliptical galaxy Messier 87 (M87), in the constellation Virgo.

But this still presents a considerable challenge. Although M87*’s event horizon has a radius between 65 and 123 Astronomical Units (an A.U. is the distance between Earth and the Sun), it is no mean feat to detect it at a distance of 50 million light years! Even taking advantage of the magnification effect of gravitational lensing caused by General Relativity, astronomers must somehow identify a shadow subtending an angle of less than 25 microarcseconds in the sky. This is beyond the capabilities of even the most powerful telescopes. 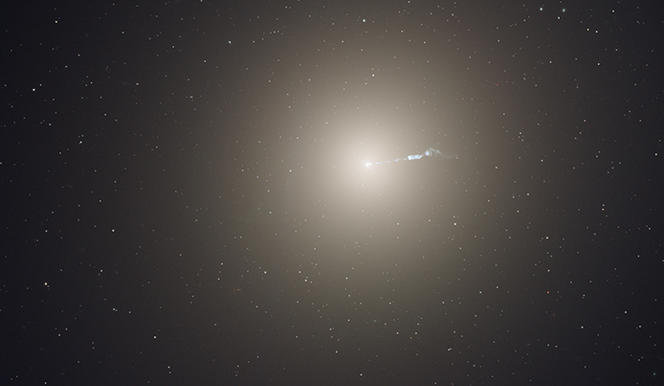 Hubble satellite image of the M87 Galaxy where the M87* black hole was photographed. 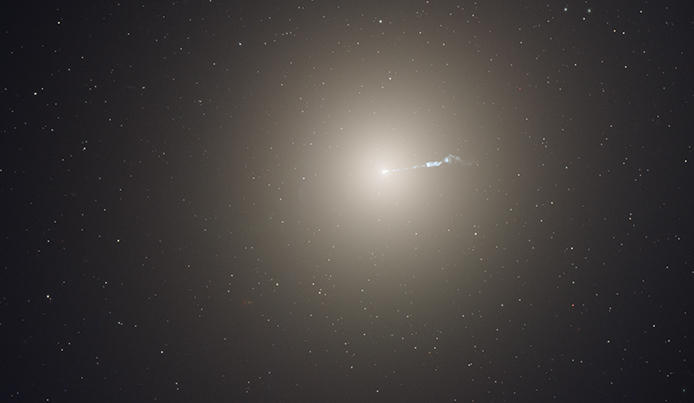 It was this challenge that gave rise to the EHT project. Launched in 2016 under the leadership of Shepherd Doeleman and Heino Falcke, respectively astronomer at the Massachusetts Institute of Technology (US) and professor at Radboud University (Netherlands), this international programme — the European part of which was funded by a European Research Council (ERC) grant of 14 million euros— consists in resorting to a “Very Long Base Interferometry” (VLBI) technique, rarely ever used before on such a scale and at such wavelengths (1.3 mm), in order to capture images of the shadows of Sgr A* and M87*.

As Frédéric Gueth explains, “the opaque dust along the line of sight of these sources allows only light at these wavelengths to pass through”. By synchronising with an accuracy of a fraction of a millionth of a second the instruments of eight — soon to be ten — observatories across the Earth’s surface, and then combining the collected data, the astronomers aim to produce images with a resolution of 26 microarcseconds, equivalent to that of a single radio telescope 10,000 kilometres in diameter. Enough to enable someone in New York to read a newspaper in Paris! 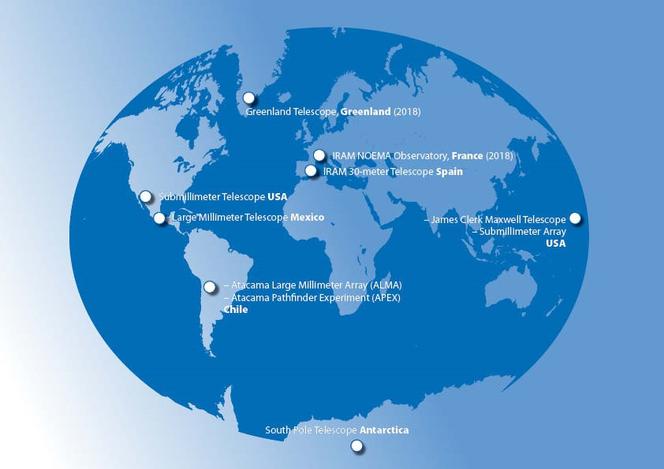 The Event Horizon Telescope international collaboration brings together 8 observatories around the world. 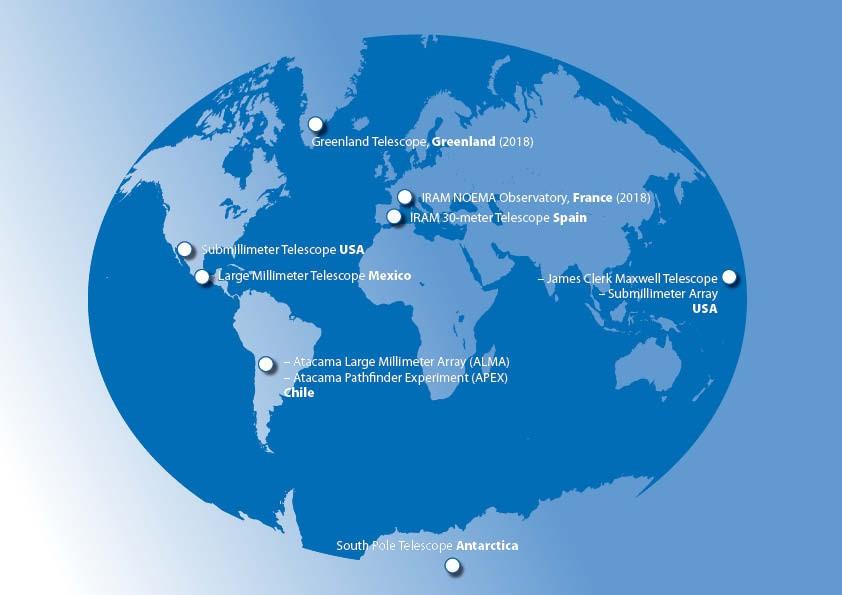 It was this unprecedented worldwide experiment in which the scientists at Pico Veleta took part. For four days, on 5, 6, 10 and 11 April, 2017, the IRAM thirty-metre radio telescope, in coordination with seven other instruments located in the mainland US, Hawaii, Chile, Mexico and Antarctica —  including the giant ALMA interferometer — was pointed successively at Sgr A* and M87*. This was a stressful time for the team, as one of them, Pablo Torne from the IRAM, recalls: “The technique had never been used under these conditions, and we had no way of knowing whether we had succeeded”. Since the amount of data collected during the test far exceeded the capacity of the Internet, all the information was stored on hard disks that were later transported to specialised centres in Haystack (US) and Bonn (Germany). This operation was not completely finalised until the end of December. Helge Rottman of the Max-Planck-Institut für Radioastronomie (MPIfR), remembers experiencing a "tremendously exciting moment" when, on Christmas Eve, the last package finally arrived in Bonn: "We had had to wait six months before a helicopter was available to collect the storage memories from the South Pole Telescope (SPT) in Antarctica!”

Once recombined in the powerful correlators at the Haystack Observatory near Boston and the MPIfR in Bonn, the signals were assigned to four teams. Working independently, each group carried out appropriate processing and then used three different methods to derive images that had to be cleared of artefacts and compared with numerical models. A slow, painstaking task that led to this unprecedented view of M87* as well as to a precise estimate of the size of its shadow (22 microarcseconds) and its mass: between 5.8 billion and 7.2 billion times the mass of the Sun, a value consistent with previous estimates by astronomers.

The operation, however, failed in the case of SgrA*, which is less massive, but a lot closer.  “In addition to calibration problems, we noticed that the source is variable and possibly poorly lined up in relation to the Earth," Frédéric Gueth explains. Whether due to the motion of matter in the black hole disc or to some other phenomenon, hourly variations in the brightness of the shadow blur the signals. This is a concern that the teams hope to resolve in future campaigns by adding new observation stations to increase the sensitivity of the EHT network. One of them will be based in France. This is the IRAM's NOEMA interferometer, whose ten (and soon twelve) 15-metre antennas installed at an altitude of 2,500 metres on the Plateau de Bure in the Alps will soon be included in the network, with just one goal: to unlock the ultimate secrets of black holes.