Image of the supermassive black hole Sagittarius A* located at the centre of the Milky Way.
EHT Collaboration
Share
Share
Scientists were aware there was a huge object hidden at the centre of the Milky Way, and they also knew it had no hair. The EHT collaboration has now obtained the very first image of Sagittarius A*, the supermassive black hole at the heart of our Galaxy.

Until now, the presence of Sagittarius A* (Sgr A*) could only be suspected, either from a few radio emissions or by observing the paths of stars orbiting at high speed around a gigantic yet invisible object. The Event Horizon Telescope (EHT) collaboration and its global array of radio telescopes have now obtained an image of the supermassive black hole lurking at the centre of the Milky Way. This is only the second direct image of this type of object ever obtained, following  the EHT collaboration's 2019 release of the first-ever image of a black hole, at the centre of the galaxy M87.

“We can now study the differences between these two supermassive black holes to gain valuable new clues about how this important process works,” says Keiichi Asada, an EHT scientist at the Institute of Astronomy and Astrophysics, Academia Sinica, Taipei (Taiwan). “We have images of two black holes – one at the large end and one at the small end of the supermassive black holes in the Universe – so we can go a lot further in testing how gravity behaves in these extreme environments than ever before.”

The bright accretion disk orbiting around the 4.3 million solar masses of Sgr A* at near-light speeds has a diameter equivalent to 30 times that of the Sun, but since it is located 27,000 light years from Earth it appears to be about the same size in the sky as a doughnut on the Moon. Therefore, to obtain this picture, the researchers had to combine the data collected night after night by the EHT's eight telescopes linked together across the planet, and then refine the ‘raw’ images produced using numerical models of black holes. The EHT team's findings are published on 12 May, 2022 in a special issue of the journal The Astrophysical Journal Letters. 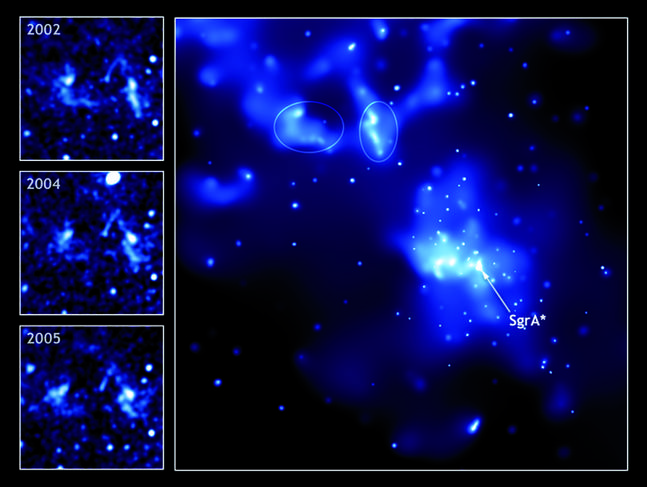 Image of the centre of the Milky Way, where Sagittarius A* is located, obtained in 2007 with the Chandra Space Telescope. On the left, variations in the pattern and brightness of gas clouds in the region, observed between 2002 and 2005. 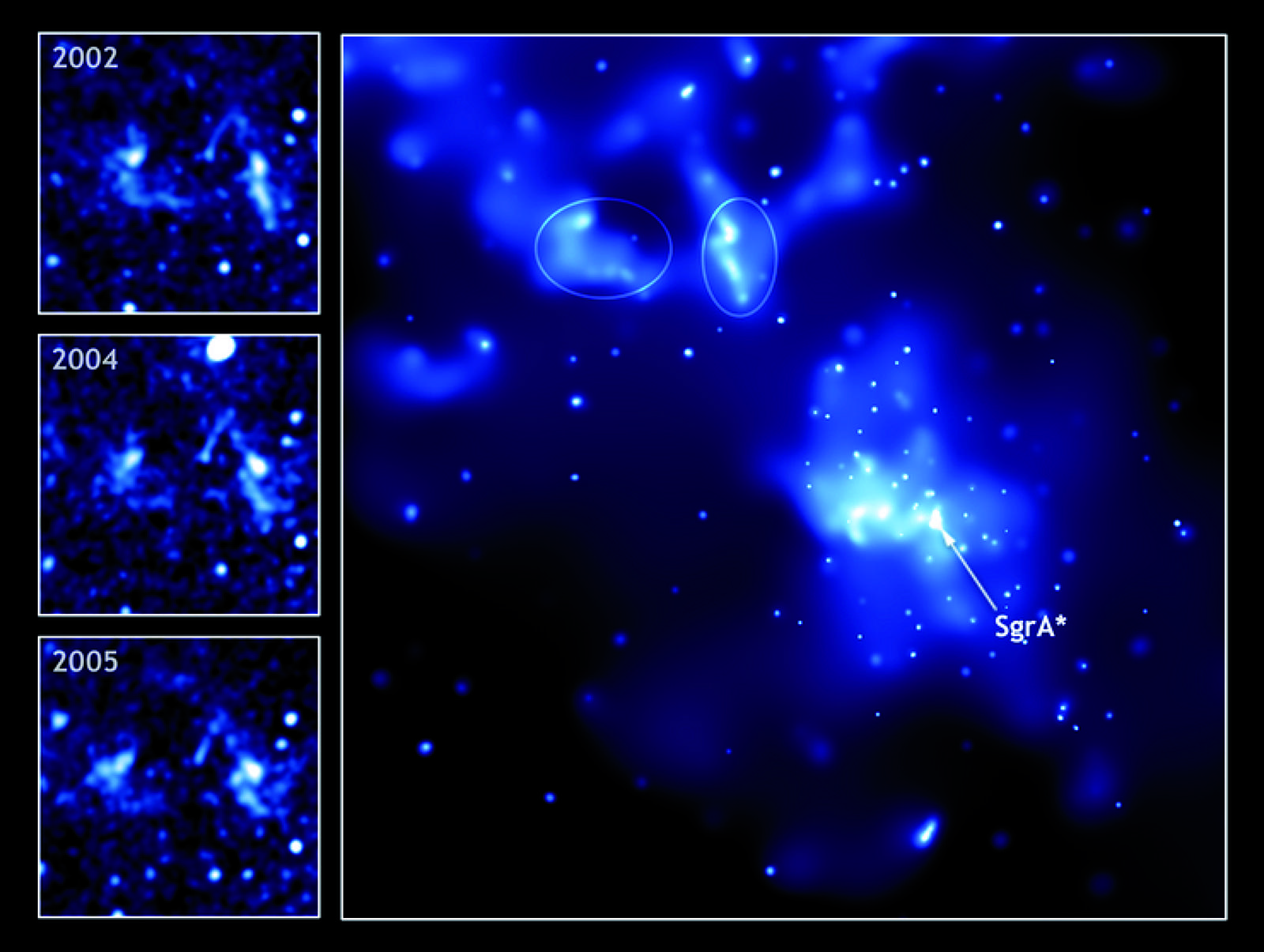 A 10,000 km-diameter radio telescope
The European contribution to the international EHT project, which was launched in 2016 by Sheperd Doeleman and Heino Falcke, respectively an astronomer at MIT (United States) and a professor at Radboud University (Netherlands), is funded through a €14 million European Research Council grant. Using a technique called Very Long Base Interferometry (VLBI) at a wavelength of 1.3 millimetres (radiation that can penetrate any dust clouds present along the line of sight), the EHT synchronises, with an accuracy of a fraction of a millionth of a second, the instruments of eight – soon to be ten – radio observatories scattered around the globe, producing images with a resolution equivalent to that of a single radio telescope 10,000 kilometres in diameter!

Map of the telescope array used by the EHT collaboration.

Although Sgr A* is 2000 times closer to us than M87* (which is 50 million light-years away), it proved much harder to image. And for good reason: although the gas in the vicinity of the black holes moves at the same speed, nearly as fast as light, it takes days to orbit M87*, which is 1500 times more massive than Sgr A*and therefore much larger, but just a few minutes to complete an orbit around Sgr A*. “The rapidly-changing brightness and pattern of the gas around Sgr A* generate a set of data that is far more complex than that of M87*, which is why we had to develop new numerical tools to simulate and analyse the gas's motion to obtain a clear picture,” explains CNRS researcher and IRAM deputy director Frédéric Gueth. “Hence the fact that three more years were necessary to image Sgr A*.” It actually took the 300 EHT researchers five years of intensive calculations on the data collected in 2017 to obtain the image.

No hair, but gas around black holes
This second image confirms what theoretical physicists had suspected: despite their huge difference in size and the fact that they are located in different types of galaxy, the two black holes look very similar. This is not really surprising. Black holes are massive physical objects that are difficult to observe directly but quite straightforward to characterise. Like elementary particles, they can be fully described by just three parameters: their mass, rotation speed and electric charge. They contain no other information. The physicist Archibald Wheeler once summed up this simplicity – and uniformity – with the phrase   “black holes have no hair”. 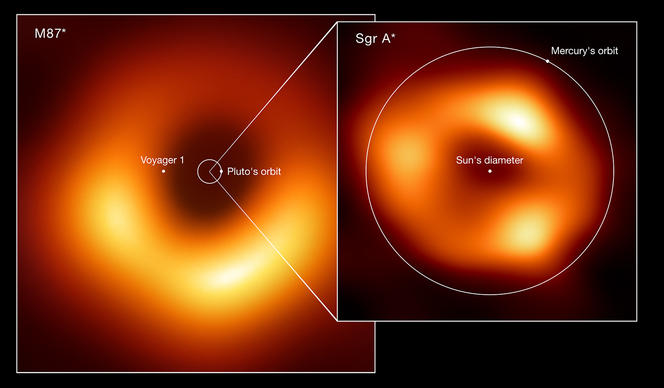 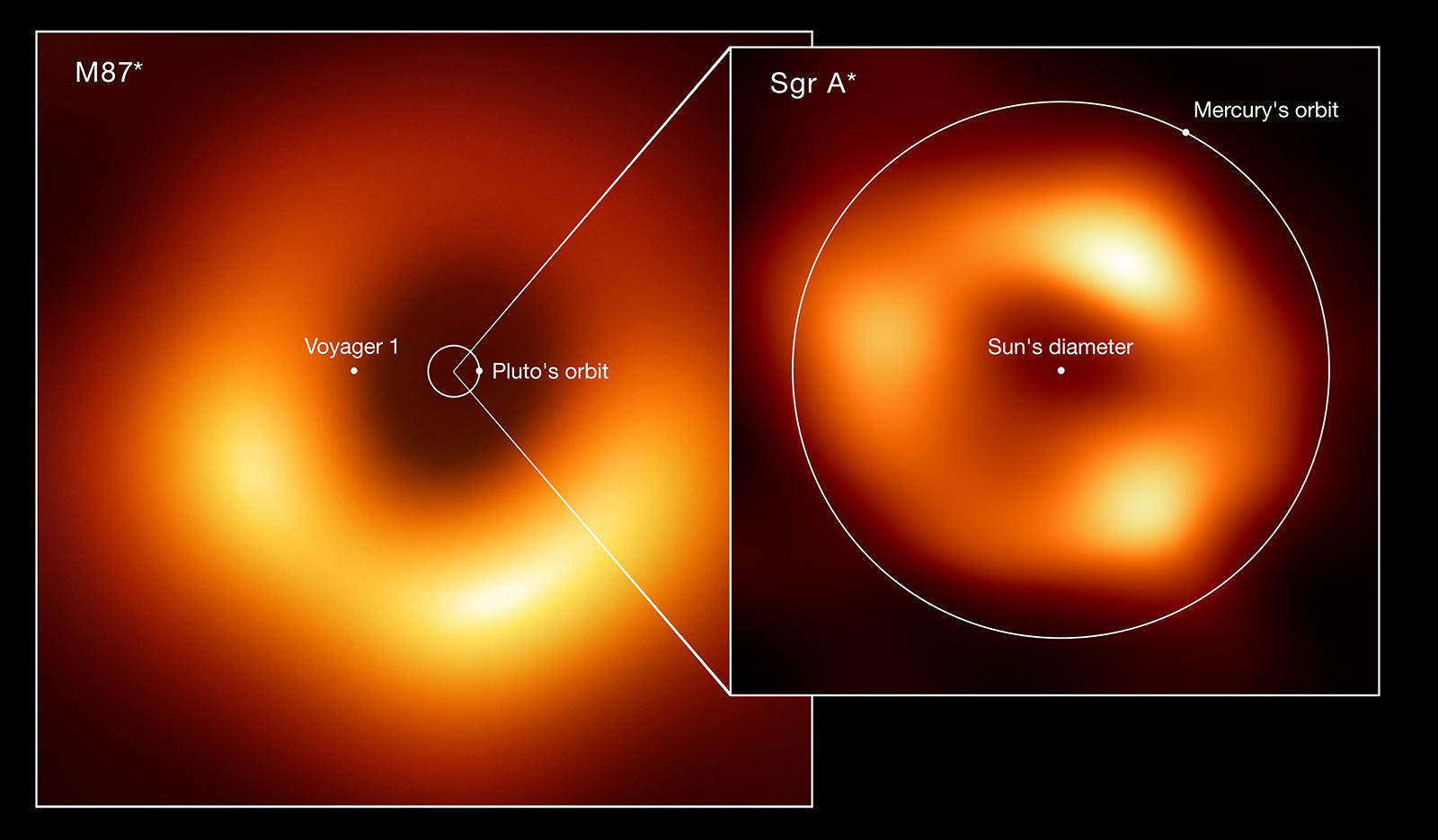 “General relativity governs these objects up close, and any differences we see further away must be due to disparities in the material that surrounds the black holes,” says Sera Markoff, Co-Chair of the EHT Science Council and a professor of theoretical astrophysics at the University of Amsterdam, in the Netherlands. Now that they finally have images of two black holes of very different sizes, the researchers will be able to test theories and models of the behaviour of gas around supermassive black holes. Although this process is not yet fully understood, it is thought to play a key role in the formation and evolution of galaxies. 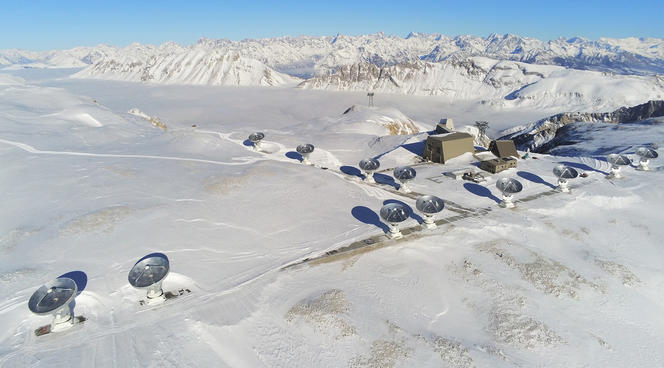 Located on the Plateau de Bure in the French Alps, NOEMA is the most powerful radio telescope in the northern hemisphere and one of the largest facilities in Europe for astronomical research. 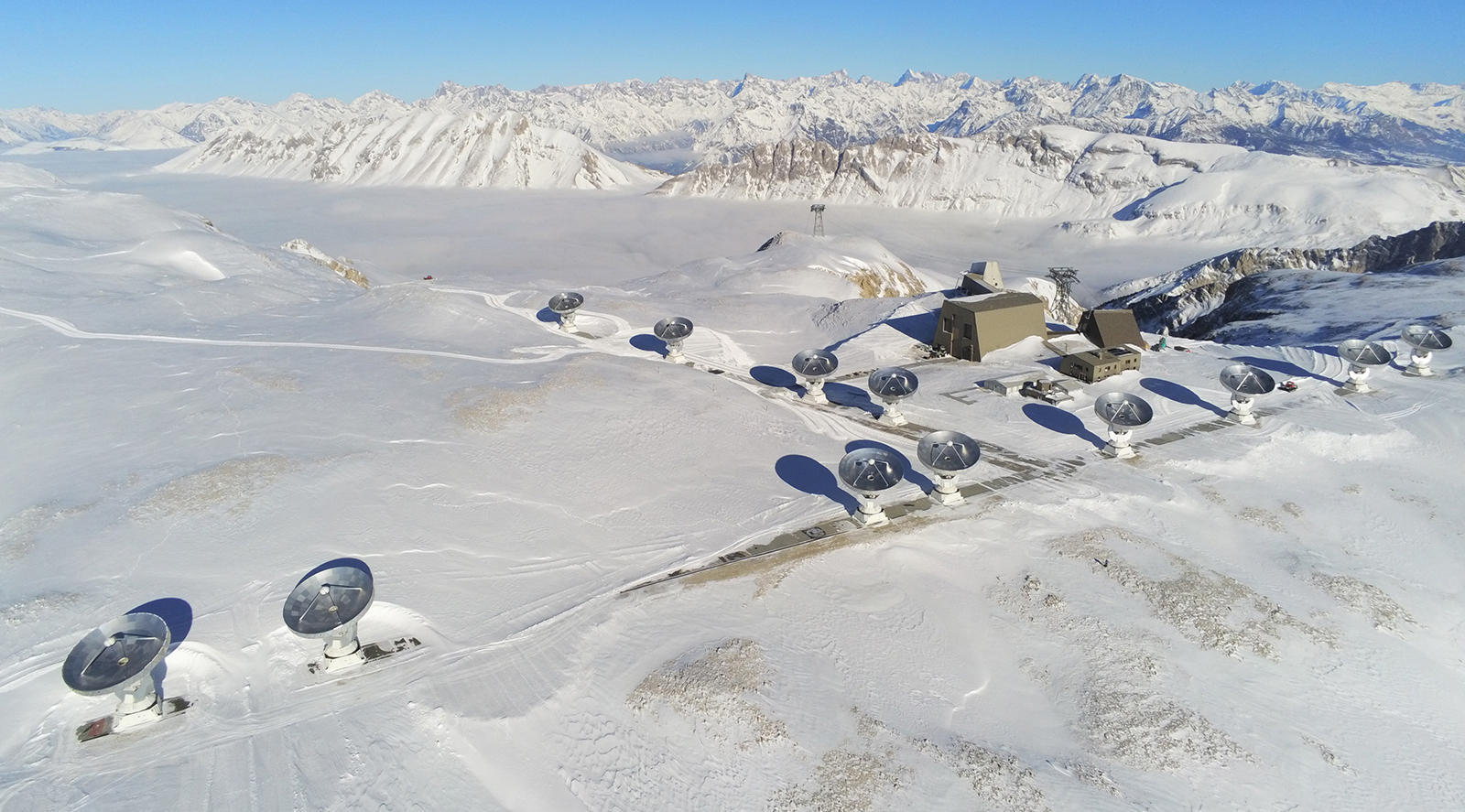 The eyes of IRAM

The CNRS contributes to the EHT via the two IRAM observatories: the 30-metre telescope   (http://www.iram-institute.org/EN/30-meter-telescope.php) located at an altitude of 2,850 metres on Pico Veleta, in southern Spain's Sierra Nevada, joined in 2018 by NOEMA  (NOrthern Extended Millimeter Array), a radio telescope whose twelve 15-metre antennas were recently deployed on the Plateau de Bure in the French Alps. Together with the ALMA telescope in Chile, IRAM's 30-metre instrument provided the longest baseline and hence the sharpest images, thus contributing decisively to the high spatial resolution of the Sgr A* images.

The EHT's achievements are set to continue: a major observation campaign in March 2022 involved the use of more telescopes than ever before, including IRAM's second observatory, NOEMA, which joined the EHT array in 2018 and made its first observations in 2021. Further development of cutting-edge receiver technologies for NOEMA and the IRAM 30-metre telescope will enable the EHT collaboration to gather time-lapse images with even finer details. “In a few years' time, we hope that NOEMA will be able to produce an image every hour – in other words, by combining eight hours of observations, we’ll be able to obtain eight images rather than just one,” says Gueth. “That would enable us to see changes and motion in the accretion disk, providing us with absolutely vital information.” The two facilities will play a key role in helping the EHT collaboration understand the physics of massive black holes, and in particular of Sgr A*.