Microscopic image of starch grains (left and right) in regenerated cellulose fibres (top centre) and wood (bottom centre).
CERMAV
Share
Share
HIV, obesity or Parkinson’s disease are all conditions that could be treated using complex carbohydrates. Inspired by these sugars—present on the surface of all cells—several research teams have developed a variety of strategies, as demonstrated in the context of six applications.

Often cited for its harmful effects, sugar is also inspiring new therapeutic options. Specialists in the glycosciencesFermerDisciplines that study complex carbohydrates and their relationships with proteins and lipids. are thus focusing on the spatial structure and chemical properties of the long-chain carbohydrates present on the surface of our cells. “These complex sugars are involved in most chronic and infectious diseases," explains Anne Imberty, a CNRS biochemist and director of the CERMAV1 in Grenoble. “They are indeed recognised as protein receptors that are found not only on bacteria and viruses but also on cells in the immune system.”

To combat an infection, the scientists therefore had the idea of producing "decoy" molecules that would mimic the action of these complex carbohydrates while enhancing their attraction potential. Instead of binding to cells in the intestinal or lung walls to trigger an infectious reaction, pathogenic agents would bind to these “decoys.” “These ‘anti-adhesion’ molecules could neutralize a pathogenic micro-organism, attenuating not only the infection but also inflammation," explains Julie Bouckaert, scientist at the UGSF.2

Complex carbohydrates also undergo a succession of enzymatic reactions which combine or associate them with other molecules such as lipids or proteins: this is called glycosylation. A biochemist in the same laboratory as Julie Bouckaert, Anne Harduin-Lepers is studying the final stages of this process whose disruption is at the origin of epithelial tumours such as breast or colon cancers. “If we ever manage to identify the molecular mechanisms underlying this disruption, we should be able to develop new therapeutic options that act directly on glycosylation enzymes,” she hopes. Meanwhile, six applications—listed below—are under development.

The complex carbohydrates that coat our cells play a crucial role in our interactions with the proteins carried by viruses, bacteria and the cells of our immune system. It is known that a bacterial disease such as cholera is more likely to affect individuals with blood group O. Based on these observations, teams in Grenoble (southeast France) and Graz (Austria) are trying to develop a method based on bacterial receptors to detect blood groups. 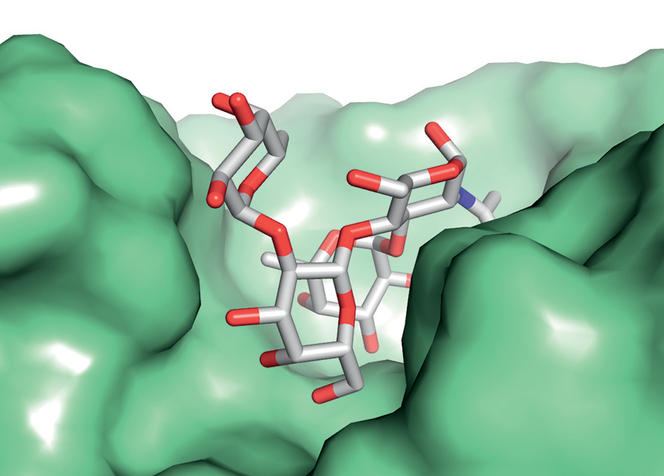 Sugar molecule at the recognition site of a human antibody (in green). Sugars in blood cells play a crucial role in terms of immunity. 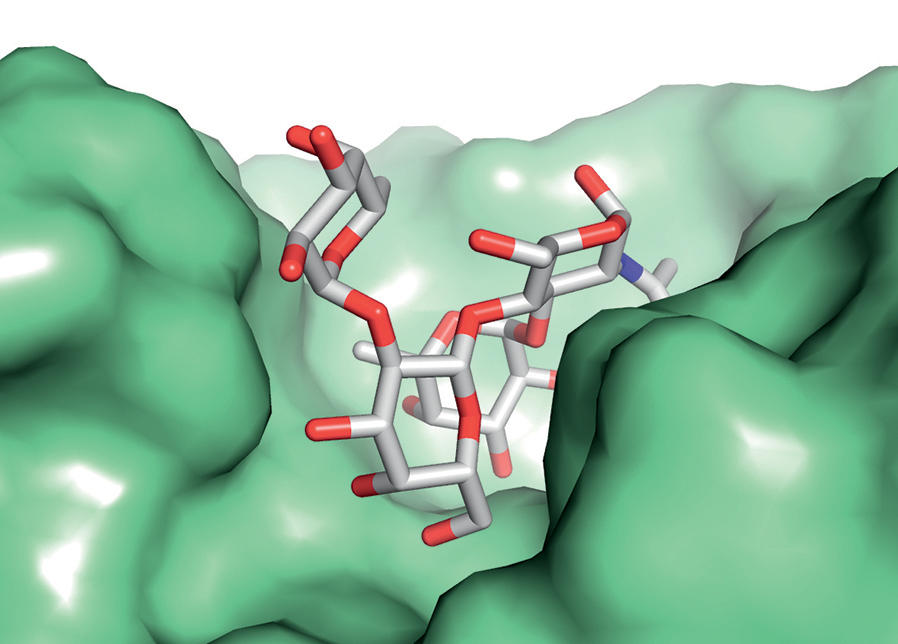 The scientists have redirected the cell machinery of a bacterium so that it produces protein receptors containing fluorine atoms at precise points in its molecular skeleton. “Thus modified, the protein receptors display a greater affinity for the carbohydrates carried by group A red blood cells,” explains Anne Imberty.  Being able at will to shift fluorine atoms on the surface of a protein offers the possibility to develop biomarkers that are specific to each blood group, the aim being to improve the reliability of tests designed to limit the risks of rejection associated with blood transfusions.

Cyclodextrins are cyclic oligosaccharides in the form of a lampshade and are able to encapsulate molecules within a “cage”. Based on these "cages", a team involving scientists from three French laboratories3 has developed a structure that can transport biological molecules, and particularly fragments of DNA. “Thanks to chemical modifications to cyclodextrin, we have allowed these molecules to nest,” explains Matthieu Sollogoub, an academic at the IPCM.4 “We were then able to create a succession of (positively charged) docking points on these nested assemblies that enable a (negatively charged) DNA strand to attach itself.”

Diagram of cyclodextrin molecules in a lampshade shape. By stacking them, the scientists have produced a “cage” that can transport DNA fragments.

Diagram of cyclodextrin molecules in a lampshade shape. By stacking them, the scientists have produced a “cage” that can transport DNA fragments.
M. SOLLOGOUB
M. SOLLOGOUB
Share
Share

These structures also have the advantage of being reversible. Once the molecule of interest has been transported into the cytoplasm of a cell, the cyclodextrin column degrades spontaneously, releasing the DNA and thus avoiding any risk of toxicity to the organism. These characteristics may also open the way to using cyclodextrins as gene vectors in the context of gene therapy.

3. The intestinal fiber of prebiotics

Thanks to an innovative process for hemicelluloseFermerConstituent of wood containing a broad diversity of complex carbohydrates. extraction, a team from the LGP2,5 the CERMAV and the TIMC-IMAG6 has isolated a mixture of oligosaccharides with considerable prebioticFermerFood constituents likely to improve our health by stimulating certain bacteria in the intestinal microbiota. potential.

After testing this mixture on bacteria from our digestive tract, it was administered to mice. Using DNA analyses, the scientists were able to demonstrate that its absorption by rodents favoured the growth of “good” bacteria in their digestive tract. “Molecular indicators for inflammation reached lower concentrations than in mice that did not receive the prebiotics" explains Christine Chirat, professor of wood chemistry at the LGP2 and coordinator of this work.

The benefits of this mixture of 100% natural, complex carbohydrates suggest that it could be commercialised in the near future as a food supplement to correct fiber deficiency; however it is still necessary to characterise all the molecules it contains. Medical applications intended to combat obesity or chronic inflammatory intestinal diseases could subsequently be envisaged.

4. A gel that repairs brain tissue

Although hyaluronic acid is mainly known for its propensity to smooth wrinkles, its long carbohydrate chains also ensure the proper development of our cells, notably in the brain. By combining it with an amino acid oligomer (short protein fragments), Rachel Auzély-Velty and her team at the CERMAV have designed a gel that can control the regeneration of brain tissue. “By injecting our gel into the brains of rats, we have already been able to demonstrate its biocompatibility, and MRI scans have shown that it remains entirely localised in the zone targeted by the injection”, comments the academic. 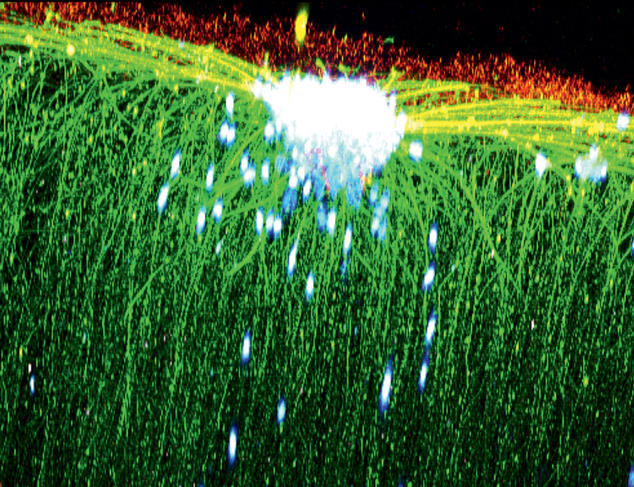 In vitro development of axons (extensions of neurons) in a gel seeded with neural stem cells. Two-photon microscopy image. 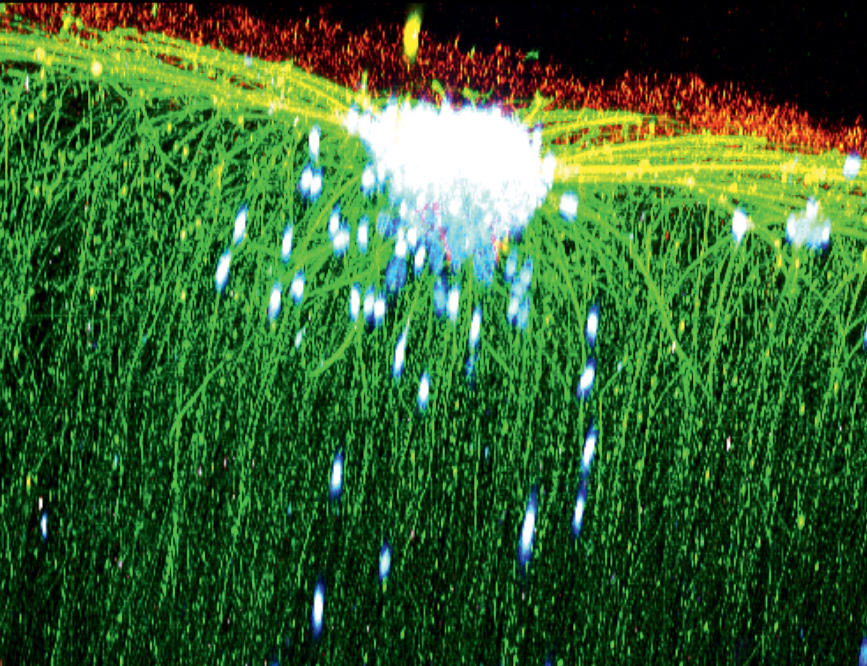 If they can combine their gel with neural stem cells, the scientists are planning to reconstruct functional neuron networks at the level of brain areas damaged by a stroke. Indeed, one day, this strategy might also compensate for the destruction of nerve cells in the context of Parkinson’s disease.

5. HIV inhibited by a mimetic

In the fight against the AIDS virus, the first validated molecules inhibited HIV replication in cells that were already infected. Blocking the virus before it enters its target cells is a more recent strategy.7 The mechanisms of HIV entry involve multiple potential therapeutic targets that have often been studied separately.

In contrast with these approaches, a French consortium8 has now developed an original strategy aimed at simultaneously inhibiting the interaction between HIV and three major actors in its entry: the CD4 receptor, the CCR5 and CXCR4 co-receptors and a linear polysaccharide heparan sulfate. To achieve this, the scientists designed and synthesised the CD4-HS molecule, which is a functional mimetic of the CD4 receptor bound to a synthetic dodecamer of heparan sulfate.

“We first of all verified in vitro that CD4-HS inhibited the HIV recognition sites targeted, thus blocking access of the virus to the cells, and that it was endowed with remarkable antiviral activity,” explains David Bonnaffé, a member of the consortium and academic at the ICMMO.9 “Molecular optimisation then enabled us to select an even more active compound for in vivo studies in rhesus monkeys, which evidenced the ability of our compound to prevent contamination via the vaginal mucosa.”

This therapeutic efficacy in animals means it is possible to envisage using this molecule for preventive purposes, and also confirmed its potential for curative therapies.

6. A spray against lung infections

Two CNRS chemists have developed "decoy" molecules which specifically target pathogenic micro-organisms responsible for lung infections. “They are made up of a chemical skeleton onto which are grafted several synthetic sugars. These imitate the complex carbohydrates present at the surface of cells that line the walls of the lungs," explains Sébastien Gouin, a researcher at the CEISAM laboratory.10 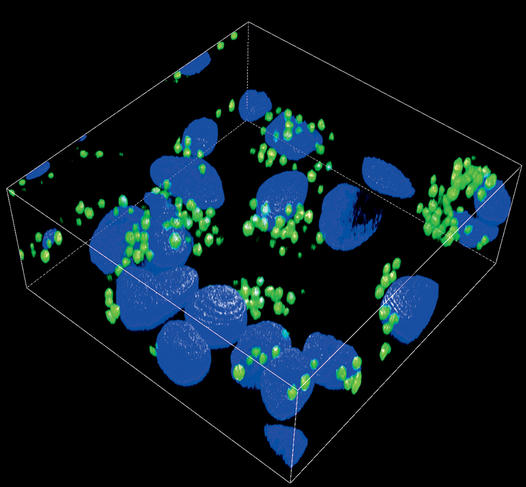 Adhesion of spores of an infectious agent (Aspergillus fumigatus, in green) to lung cells (in blue). Fluorescence microscopy image. 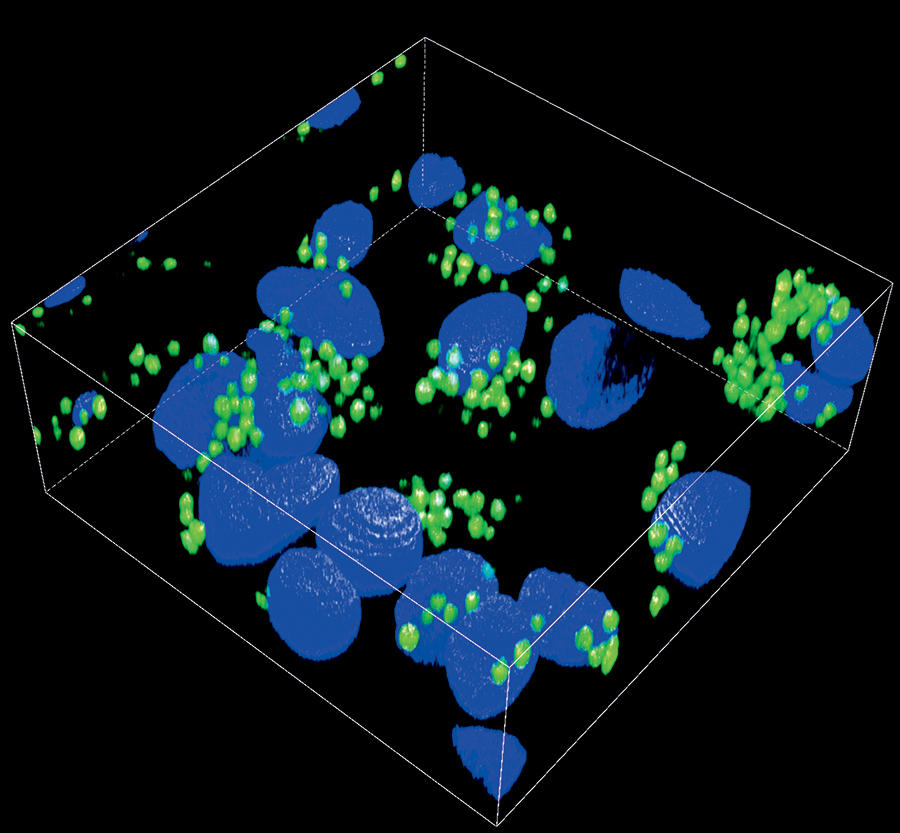 Introduced in a spray form into the respiratory tract, these compounds dock firmly to the protein receptors for pathogenic agents, thus preventing them from binding to the lung wall. “By reducing to almost nothing the virulence potential of these micro-organisms, this anti-adhesion strategy offers an opportunity to significantly lessen the risk of infection in immunosuppressed individuals, such as patients in intensive care or those with cystic fibrosis,” comments Sébastien Vidal  from the Institute for Molecular and Supramolecular Chemistry and Biochemistry (ICBMS).11

The safety of these anti-adhesion molecules has been demonstrated in the mouse, but further tests need to be performed in animals. If they are conclusive, initial clinical trials in humans could start within the next three to five years.

See author's bio
In Arizona, a Miniature Earth under a DomePrevious
The Secret Life of a ClownfishNext

Article
Biomechanics off to a flying start in BMX racing
Chemistry