Determining the role of climate change in extreme weather events

Determining the role of climate change in extreme weather events

Storm over the Mediterranean on the night of 18-19 August 2022, as seen from Nice (southeastern coast of France).
Valery Hache / AFP
Share
Share
Whatever the time of year, our planet is increasingly impacted by extreme weather events, such as devastating floods and storms, heat waves, and cold spells. But how can we be sure that climate change is responsible for a particular phenomenon? Scientists have recently made huge strides in answering this crucial question.

Whenever you watch the news on television or listen to it on the radio, you’re bound at some point to hear a grim-sounding newsreader asking a scientist whether the latest natural disaster is due to global warming. And the expert to cautiously reply, “We can't be certain that this event is specifically caused by climate change. What we can be sure of, on the other hand, is that climate change will lead to this type of phenomenon becoming increasingly common,” – an answer that doesn't really satisfy anyone.

However, the past few years have seen the emergence of a new field of research that aims to find better answers to this question:  Extreme Event Attribution, also known as attribution science. Its goal is to discover whether or not global warming has played a role in specific weather events. Its findings should improve our understanding of hurricanes, heatwaves, storms, cold spells and other violent phenomena that conventional climate models have difficulty explaining. They should also help to improve assessment of the weather risks incurred by a particular region and inform policies on the implementation of adaptation strategies.

It all started in 2003 with an editorial in the journal Nature by a British researcher called Myles Allen. “Following floods in Oxford, Allen wondered whether they could be attributed to climate change so that those responsible could be sued. Allen's approach was a legal one,” explains Aglaé Jézéquel, a climatologist at the LMD dynamic meteorology laboratory.1 “He gave the following example: if my house loses value because of an increased risk of flooding, can I make major polluters pay for the damage?” 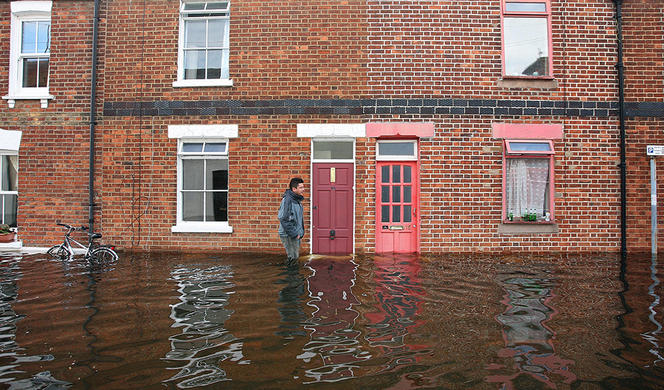 A man trying to get to his house in Botley, near Oxford, UK, on 25 July, 2007, after torrential rain caused the River Thames to yet again overflow its banks. 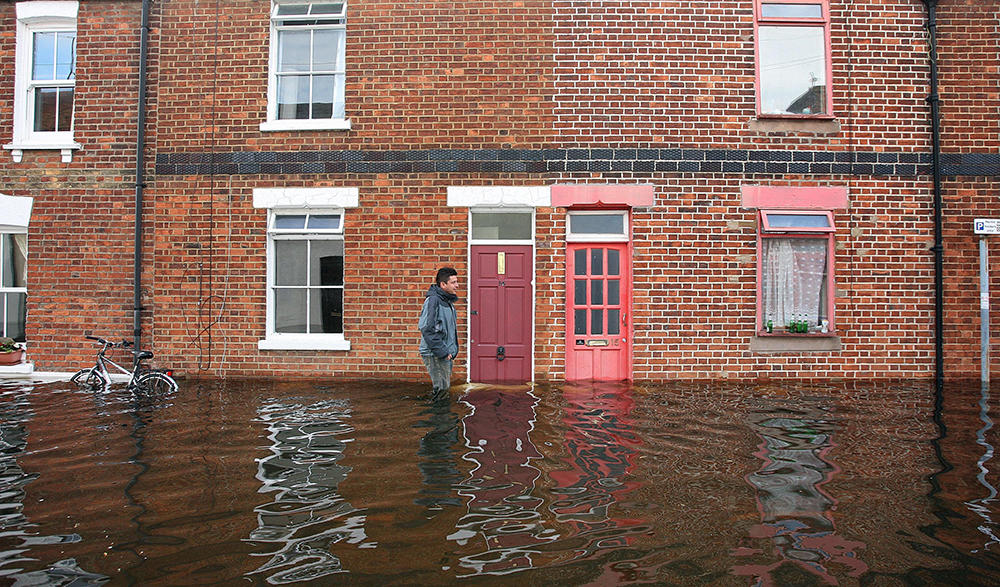 To do this, Allen said, you would first have to prove that climate change really was to blame for the increased flood risk. The idea of extreme event attribution was born. However, Allen's paper also proposed an attribution method. This consisted in comparing the likelihood of these floods happening in the real world with the probability of their occurrence in a fictitious world where climate change would not have taken place.

Over the years, other research teams have taken up this idea and put it into practice. To reproduce this so-called counterfactual world in which there is no climate change, researchers use climate models. By carrying out multiple simulations of the pre-industrial climate, they can calculate the probability of an extreme event occurring under these conditions. They can then compare it with the likelihood of a phenomenon of this type on an Earth where greenhouse gas levels continue to rise. However, some researchers working on extreme event attribution have realised that the method has its limitations.

“When these events are very rare, it is often difficult to prove that they’re more likely to happen due to climate change,” Jézéquel points out. This is why a new way of studying the connection between rising temperatures and extreme episodes emerged in 2015. Rather than attempting to compare frequencies of occurrence, this method seeks to understand how climate change affects the parameters that cause extreme events, and to determine the mechanisms that produce such phenomena. In this way, researchers can explain how global warming alters the intensity, duration, and geographical extent of natural disasters. 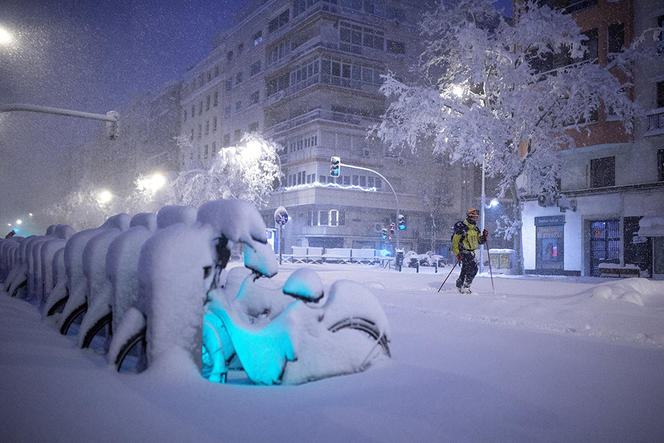 A man skiing in the streets of Madrid, 9 January, 2021. Storm Filomena brought winter weather not seen in the Iberian Peninsula for decades. 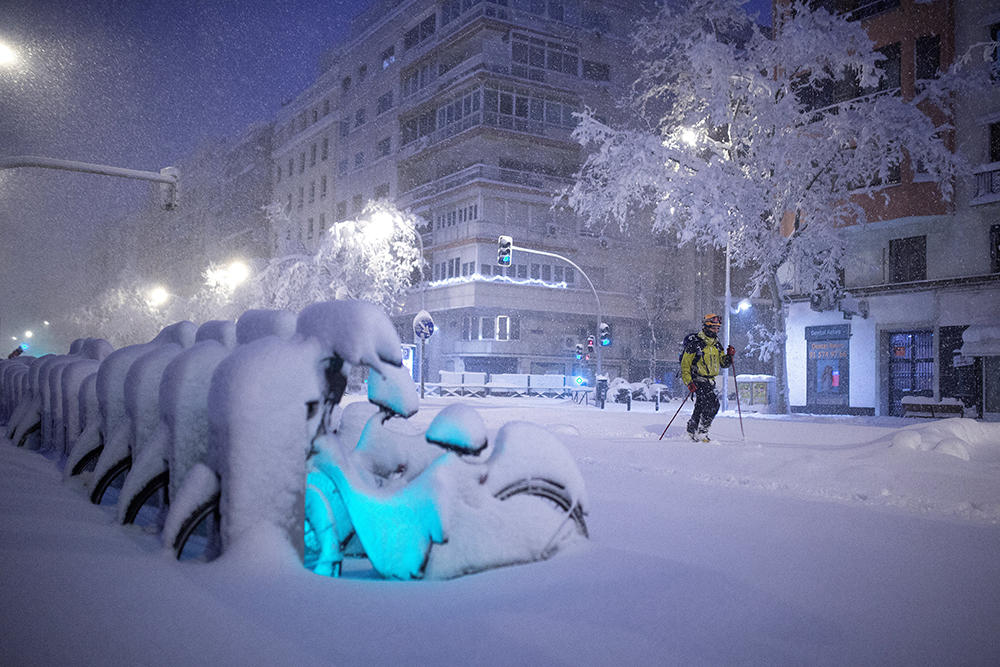 This new approach has been adopted by Davide Faranda, a researcher at the LSCE.2 His team has now proposed a novel method for extreme event attribution that has caused quite a stir in the climate science community. Their approach dispenses with climate models and solely uses current and past weather observations. Here is one example.

On the night of 17-18 August 2022, a storm system originating in the Balearic Islands suddenly struck Corsica, bringing with it gusts exceeding 220 km/h. It resulted in five fatalities, 45,000 people without electricity, and considerable damage, including 90 boats sunk or driven onto the rocks. The storm then continued on its way to Italy and Austria, causing another seven deaths. It was accompanied all along its path by torrential rainfall, adding to the destruction. In the Bouches-du-Rhône (southeastern France), over 100 millimetres of rain fell in less than 24 hours.

This extreme event falls into the category of derechos, or sudden, powerful storms that can travel hundreds of kilometres. Although relatively frequent in America's Great Plains, derechos are extremely rare in France, where only four are known to have occurred during the 20th and 21st centuries. For this reason, Faranda wished to find out whether this particular episode could be attributed to climate change.3 To do so, he relied on the three-step approach developed by his team. The first step was to use an atmospheric pressure chart to determine what large air masses and high- and low-pressure systems were present at the time.

The scientists had no trouble finding out what had caused the event. “The summer of 2022 was characterised by low-pressure systems, known in meteorological jargon as ‘cold pools’, located between Portugal and France. When these were in the vicinity of Portugal, they brought warm air from Africa up to northern Europe, leading to heatwave conditions. As they moved eastwards, on the other hand, they caused thunderstorms in France. The interaction of these systems with warm Mediterranean air masses produced storms and gusts of wind as was the case on 18 August,” Faranda explains. 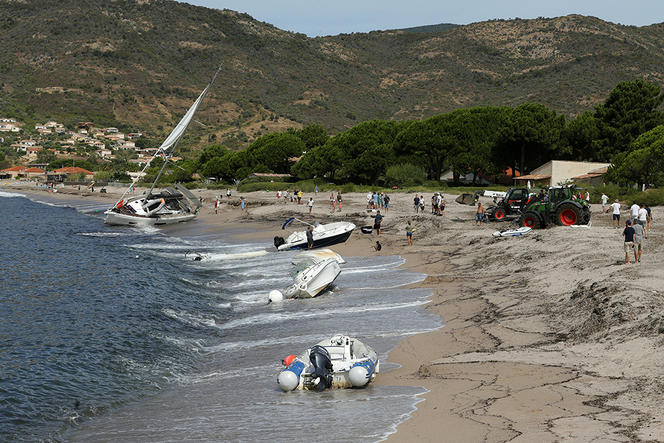 Boats were washed up onto the beach of Sagone in Coggia, Corsica, after wind gusts of over 220 km/h struck the island on the night of 17-18 August, 2022. 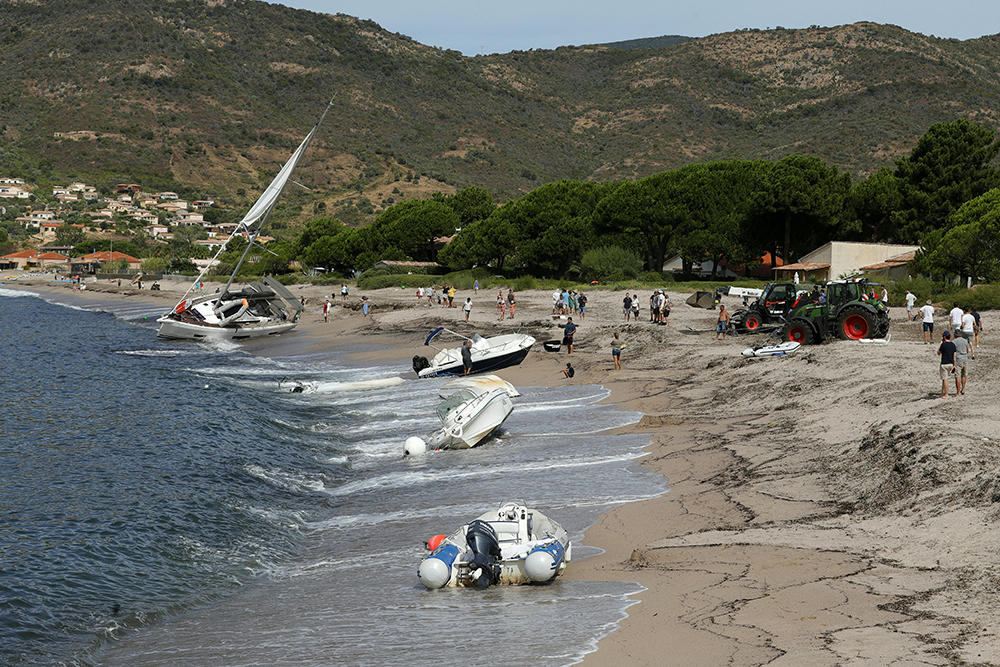 The second phase was to determine whether a similar situation had already occurred before climate change began to affect the atmosphere. To achieve this, Faranda used ERA5, a European database that provides hourly estimates of atmospheric, land and oceanic climate variables extending back to 1950. He searched the records for patterns similar to that of 17-18 August in the period between 1950 and 1979, in other words when the impacts of global warming were still weak or even imperceptible. He discovered that there was nothing unusual about the position of major air masses at the time of the storm. Between 1959 and 1979 the situation had occurred at least thirty times.

And yet there were no records of any storms of similar magnitude over that period. This meant something had changed, and the third step was to find out what it was. Again using ERA5 data, Faranda successfully identified the new factor: “The difference is that, at the time of this storm, the temperature of the Mediterranean was 5 °C above the seasonal average.”
The exceptionally high temperature of the sea boosted the convective forces that led to the storm, and the amount of water vapour which accumulated in the atmosphere as a result triggered destructive thunderstorms. Faranda's conclusion is clear: “Our analysis demonstrates the crucial role played by climate change in the intensity of the 18 August derecho.”

Again by comparing a period little affected by global warming with the present situation, the LSCE team then studied a series of weather events that took place in 2021. These included hurricane Ida in the United States, the March cold spell in France, the Po Valley tornado outbreak in Italy, the winter storm Filomena in Spain, and the Mediterranean cyclone (aka medicane) Apollo. In most cases they found a very clear link to climate change. However, the researchers' method proved unsuccessful with Filomena and Apollo, for lack of any similar atmospheric patterns in the historical record. “Since no such patterns were found, we were unable to determine the role of climate change in the occurrence of these events,” Faranda laments. 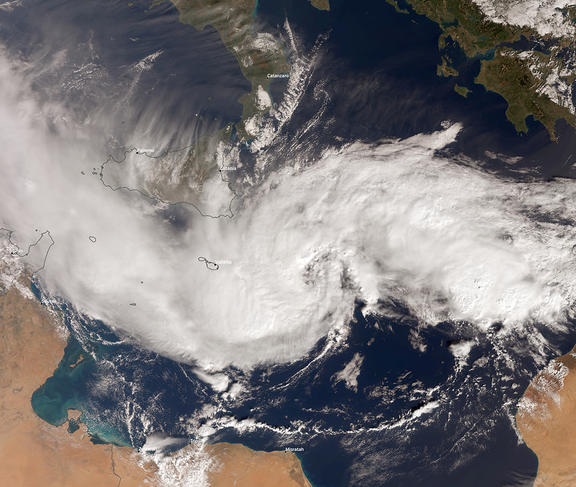 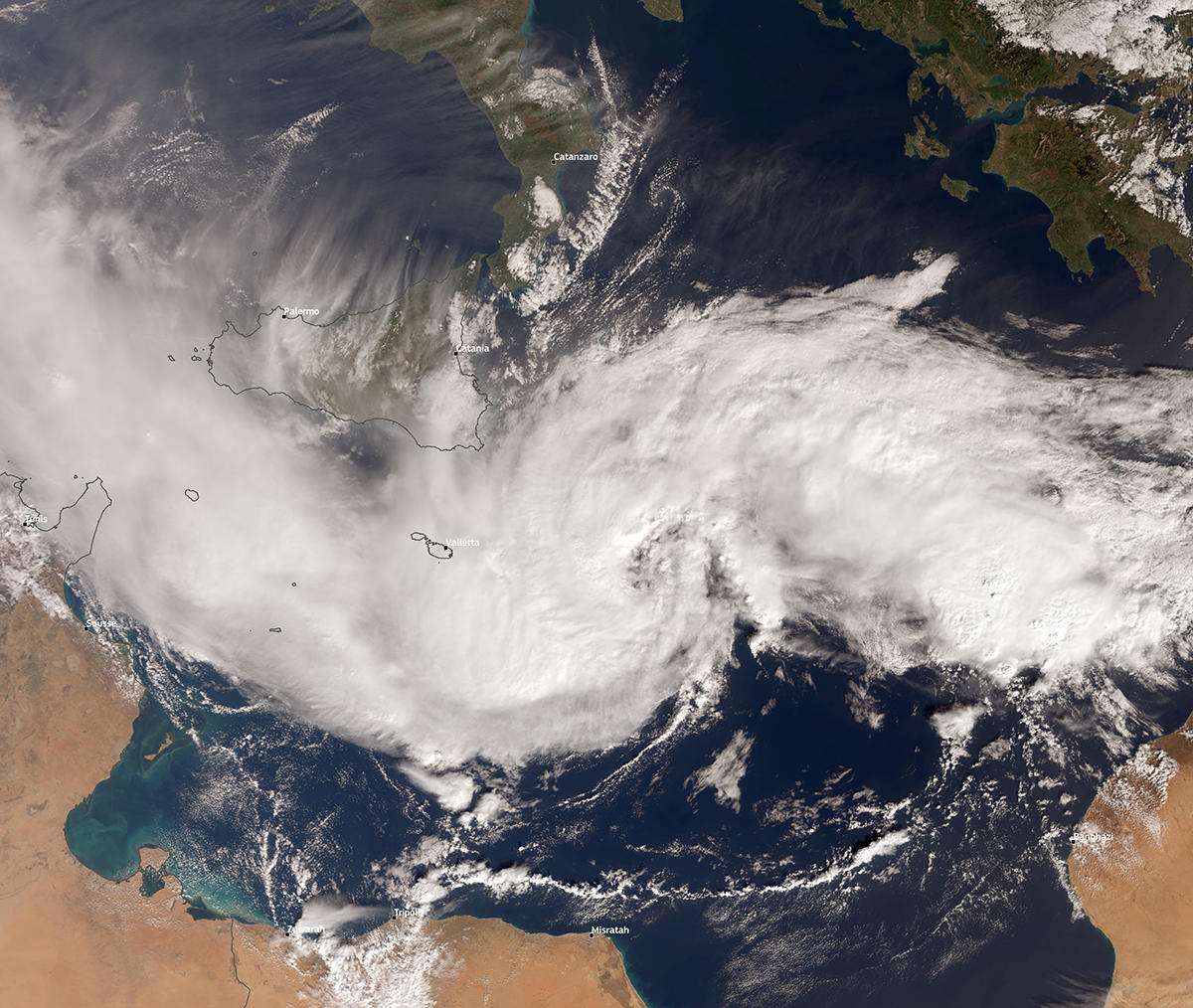 Since Myles Allen's seminal article, the science of extreme event attribution has undergone significant changes. In addition to the legal perspective that the British researcher had in mind (who pays for the damage caused by climate change?), it now also covers major scientific concerns. Faranda believes that these studies will help to elucidate how extreme events arise. “Global models aren't precise enough to simulate local climate. Our work therefore comes in handy: we identify unusual episodes and then look at their dynamics in order to help modellers represent them better,” he explains.

Besides, this research has an equally important social dimension. “One of the things the community is working on is how to determine the worst weather event that could impact a particular place under current or future conditions,” Jézéquel adds. “This could prove useful for adaptation and climate risk reduction.” Building a dam, a nuclear power plant or a flood protection barrier means anticipating worst-case scenarios. Extreme event attribution therefore isn't just about pointing the finger at countries and corporations that emit greenhouse gases, or responding to the well-worn argument trotted out every time there's a new heatwave or flood, namely that these phenomena have always existed and will continue to exist. Way beyond that, this new science provides a window into the future and the disasters to be avoided.

Article
Global warming in France may be worse than thought
Meteorology

Article
Probing the hidden side of thunderstorms