Home / Articles / Of Bees and Men

Of Bees and Men

Home / Articles / Of Bees and Men

Of Bees and Men

Wickerwork hives were widely used during the Middle Ages. Harvesting the honey meant a partial destruction of the swarm.
Illustration from Ibn Butlan's Taqwim al-sihhah or 'Maintenance of Health' (Baghdad, 11th century) published in Italy as the Tacuinum Sanitatis in the 14th century / Pictures from History / Bridgeman Images
Share
Share
Whether wild or domesticated, beehives have been used by humans for thousands of years. Representations and archaeological traces since prehistory and technical treatises for historical periods have offered a glimpse into this long coexistence, as the first interdisciplinary conference devoted to bees takes place this week in Paris.

Bees have been much talked-about ever since they began showing signs of disappearing. These endangered insects would take with them much more than their precious honey, as a third of our food (vegetables, fruit, grains...) actually directly depends on their work of pollination. "Honey flies," as they were called during the Middle Ages, have in fact become indispensable to humans over the millennia...

Prehistory, the time of wild beehives

"One of the oldest representations of harvesting products from beehives was found on the walls of La cueva de la Araña, a Spanish rockshelter frequented by hunter-gatherers during the late prehistoric period," recounts Martine Regert, a prehistorian and chemist at the laboratoire Cultures et environnements. Préhistoire, Antiquité, Moyen Âge.1 "It depicts humans using ropes to climb cliffs in order to gather honey from wild hives clinging to the rock face—a practice still in use today in certain parts of India and Nepal!" In fact, it is highly probable that humans have always sought the products of beehives. "Certain large monkeys such as chimpanzees are also partial to them, using sticks to extract honey from wild beehives located in tree hollows in the forest." 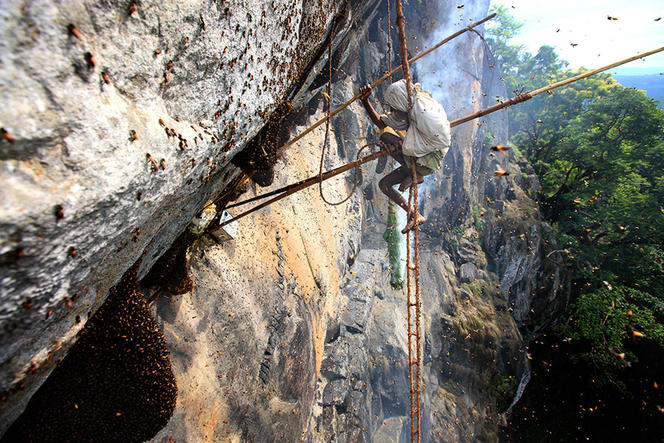 Gathering wild honey on cliffs in India. This technique was already practiced during the late prehistoric period. 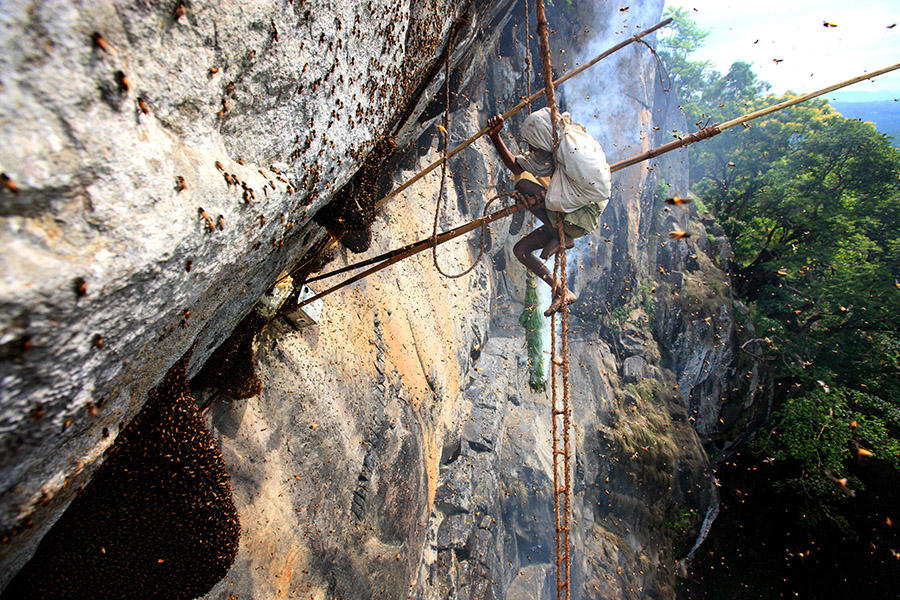 Archeochemistry and chemical analyses conducted since the 1990s on thousands of sherds of ceramic vessels from archaeological sites in Northern and Southern Europe as well as the Near East confirm iconographic information: while honey is poorly preserved through the ages, traces of beeswax with a distinctive chemical fingerprint have been found in the porous clay matrix of over 6,000 pieces of pottery dating between the 7th and 2nd millennia BC. "It’s impossible to say whether these containers were filled with honey still containing beeswax traces, with pure beeswax, or whether they were simply waterproofed with beeswax," Regert nevertheless observes. "Regardless, they confirm the importance of beehive products during the Neolithic."

The first domesticated beehives 4000 years ago?

It is difficult, however, to say with certainty where and when humans began to practice beekeeping with domesticated hives, in addition to harvesting honey from wild hives... "In the Bronze Age—which is to say 2000 BC in Western Europe—an enormous amount of bronze objects were produced using something called the 'lost wax' method, which requires a large quantity of wax. This intensification probably required the use of domesticated hives," Regert suggests. In any event, the first representations of domesticated hives can be found in Egypt starting in 2400 BC, in the sun temple of Abu Gorab. The hives depicted are made of ceramic cylinders, a technique that was widely used in Egypt, and later along the Mediterranean rim in Greece beginning in the 5th century BC, and Spain during the 3rd century. 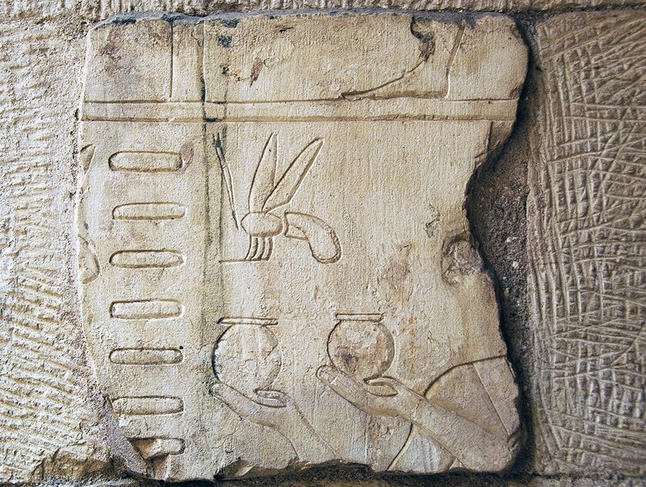 Bas-relief in Louxor (700 to 500 BCE). The oldest representations of domesticated beehives can be found in Egypt, beginning in 2400 BCE. 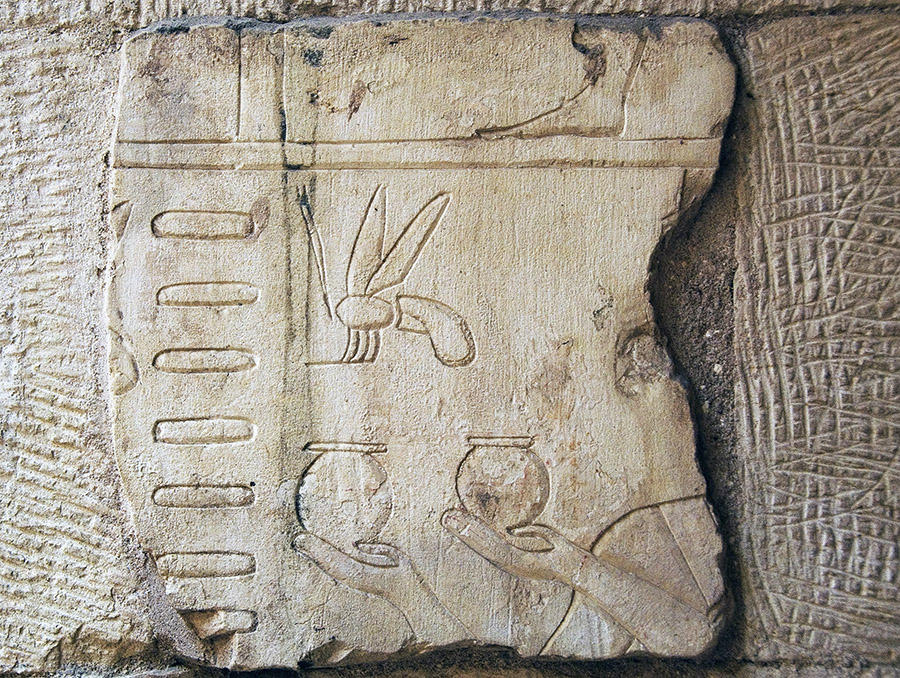 "The treatises written by ancient authors such as Pliny the Elder, Cato or Aristotle, who took great interest in bees, did not recommend terra cotta hives, because the temperature changes are would have been too important," points out Vincent Jolivet, an archaeologist at the laboratoire Archéologie et Philologie d’Orient et d’Occident.2 Other materials were mentioned during Antiquity for constructing domesticated hives: woven reed or rush, wood... In the latter, a tree trunk is hollowed out for bees to glue their rows of cells; the log is then placed vertically, and capped with a lid.

"We know honey was traded everywhere around the Mediterranean, and that it had numerous uses, naturally for food, but also as a base ingredient for preparing medicine and cosmetics, or as an embalming product," Jolivet continues. He adds that while being transported, Alexander the Great's body was immersed in a coffin filled with honey from Sicily (Hybla honey), the most prized at the time!

The permanence of know-how

Despite the development of sugarcane farming and refining in Syria and Egypt, and its spread to Southern Europe, notably in the Iberian Peninsula and Sicily, honey continued to be the primary main source of sugar throughout the Middle Ages in Europe, where sugar cane long remained a luxury product. For all that, beekeeping techniques evolved little in comparison to the ancient period. "The body of ancient know-how was transmitted up to the Middle Ages, and was copied and diffused without major novelties," confirms Sylvain Burri, a medieval historian at the laboratoire Traces.3  The primary techniques for producing hives have seemingly remained the same, with geographical variation and traditions: hives made of wickerwork or straw in Northern France, Germania and Flanders, trunk-hives or cylindrical cork hives in Mediterranean regions, and ceramic hives in North Africa. 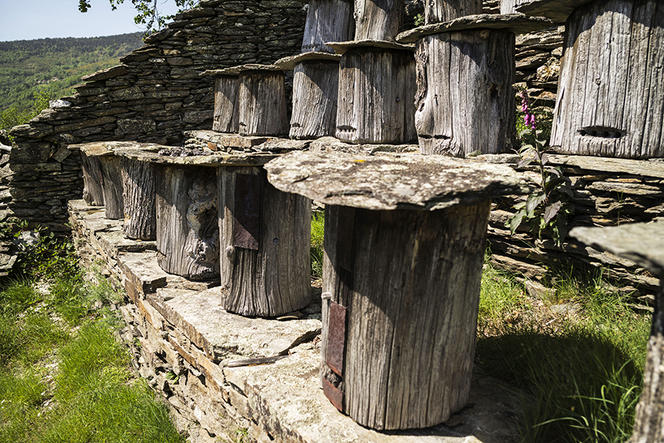 During the Middle Ages, log hives were widely used in Mediterranean regions (log hives of Gérard Delenne, a beekeeper located in Ardèche). 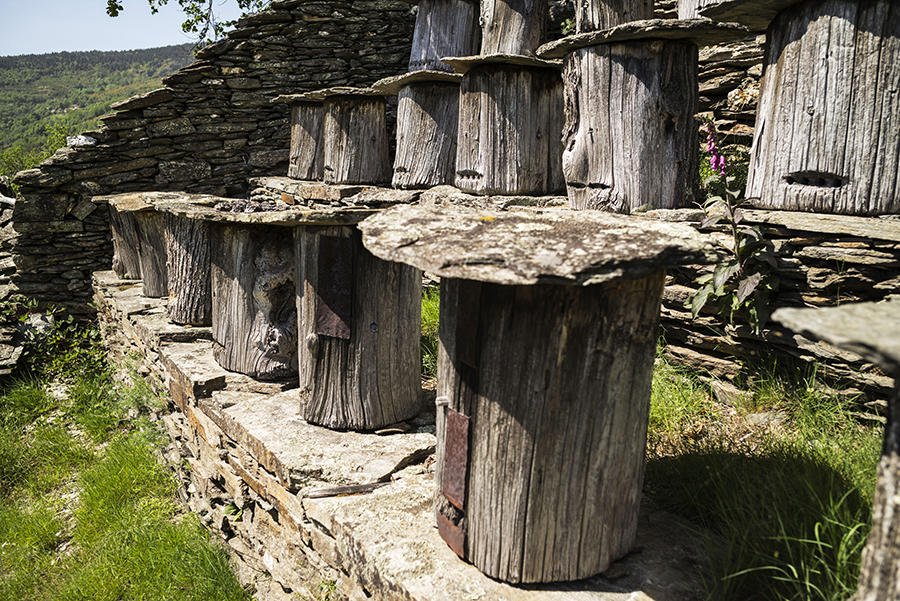 The technique for gathering honey also evolved very little; in the absence of movable rows (invented only in the 19th century), harvesting was necessarily destructive, and required sacrificing part of the swarm by cutting into the rows. "There are two types of harvests," Burri points out. "A total harvest, which means sacrificing the entire swarm in advance by drowning or asphyxiation. Or a partial harvest, where the bees are smoked out of the hive, a part of which is then cut and the other part will feed the bees during winter.'" The most destructive techniques are especially found in forested areas, where there were many wild swarms, making it easy to start a new one.

While there is no lack of texts and iconography to help retrace the history of beekeeping, archaeological traces of hives are exceedingly rare, as the straw, wicker and wood that were chiefly used are subject to rot and suffer from the weather; the same is true of bee remains. The discovery in 2007 of thirty hives made of unbaked clay dating back to 900 BC, at the archaeological site of Tel Rehov in Northern Israel, is still an exception. But researchers may not have had their last word.