Listening to the Martian "Heartbeat." This is the set goal of the InSight mission, set to monitor seismic activity to better understand the history and structure of the planet.
NASA/JPL-Caltech
Share
Share
The InSight international space mission which launched May 5 from California successfully landed on the surface of the Red Planet on November 26. By studying for the first time the seismic waves on Mars, the mission, equipped with a European seismometer, will provide valuable information on the internal structure of the planet.

Due to a lack of seismological data, the internal structure of Mars is still largely unknown. NASA's Jet Propulsion Laboratory's InSight mission1  aims to fill this gap by setting up the very first geophysical station on Mars.

Although this is a US-led project, several French teams are taking part. The mission’s main instrument, SEIS,2 was developed under the supervision of the French space agency CNES3  and the scientific responsibility of the Institute of Earth Physics of Paris (IPGP),4  with the participation of the French space instrumentation company Sodern and several international partners.5

Although astronauts successfully set up a seismic sensor on the Moon, InSight will be NASA’s very first mission to install an instrument on the surface of a planet using a robotic arm.

ISAE-SUPAERO,6  the Research Institute in Astrophysics and Planetology (IRAP),7  IMPMC8  and the Navier  laboratory9 also helped develop software and instrumentation. In addition, the LPG,10 GéoAzur11  and LMD12  laboratories will be involved in the operations as well as in analyzing the data that will enable scientists to elucidate the formation and geological evolution of the Red Planet.13

Before becoming operational on the Elysium Planitia volcanic plain, 600 kilometers from the Gale crater where the Curiosity Rover operates, the mission will first have to leave the US Vandenberg Air Force Base, in California. Carried on board an Atlas V-401 rocket, Insight is due to launch between May 5 and June 8, and after a six-month, 485-million-kilometer journey, is scheduled to land on November 26, 2018. 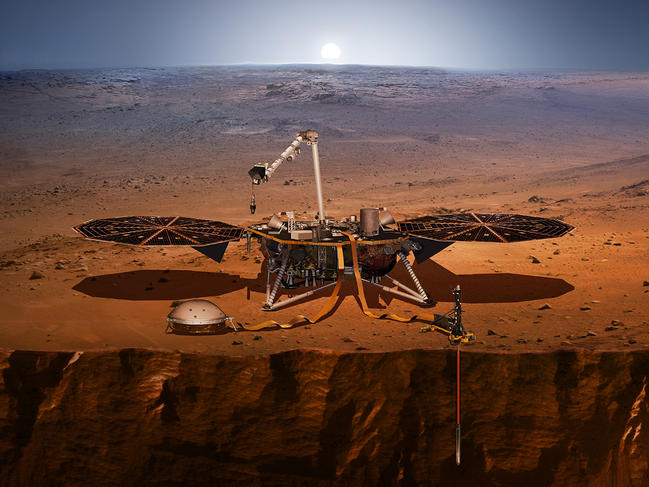 Artist's impression of the InSight mission's rover on the red planet, where it should land on November 26, 2018. 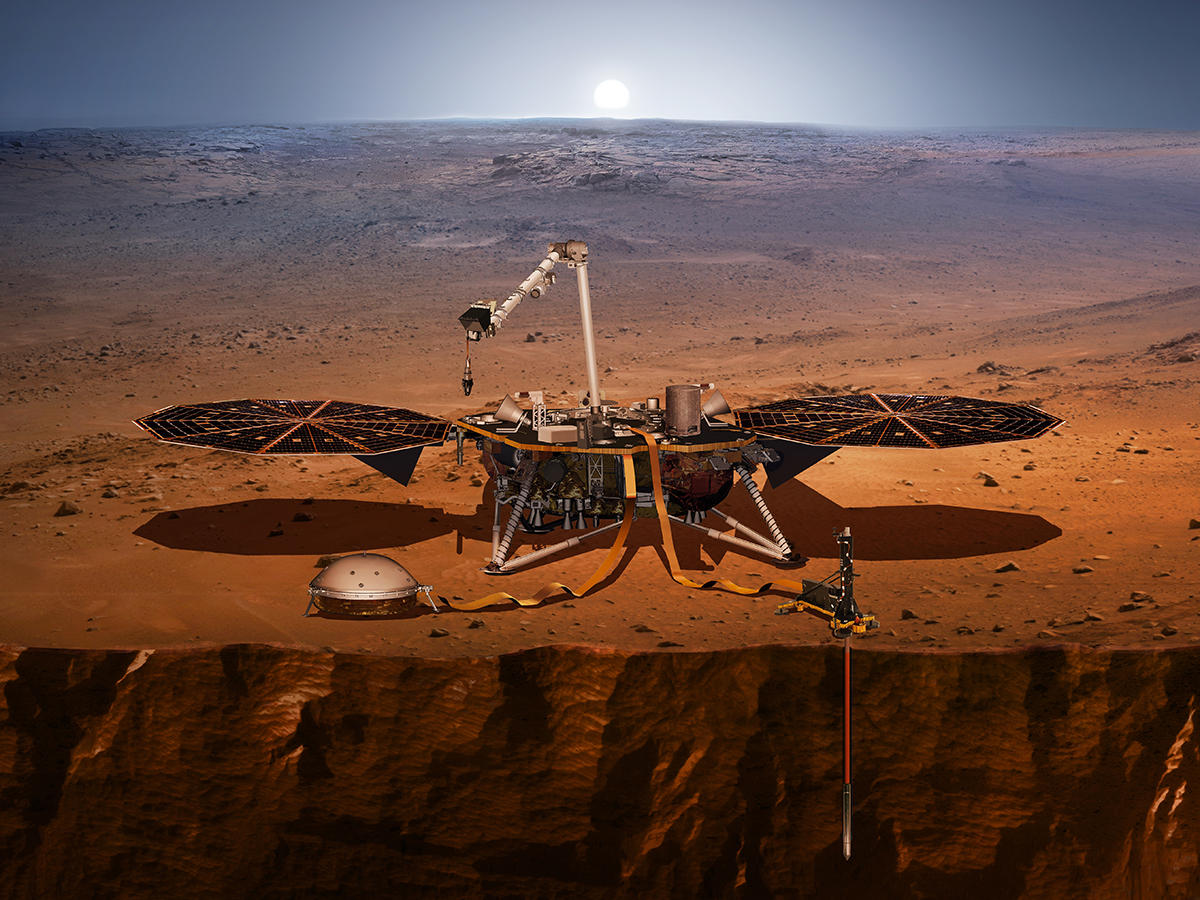 A tricky deployment operation will then ensue. “Although astronauts successfully set up a seismic sensor on the Moon, InSight will be NASA’s very first mission to install an instrument on the surface of a planet using a robotic arm,” says Philippe Lognonné, a geophysicist at the IPGP and professor at the Université Paris Diderot and Institut Universitaire de France. “The sensor will have to be put into position and covered, and a cable unrolled to connect it to the launcher. This will be a first in the field of robotics.”

Elysium Planitia is located very near the Martian equator, thus guaranteeing maximum sunlight to power the solar panels during the two-year program. Nothing has been left to chance, since previous attempts to study the structure of Mars turned out to be complete failures, such as the Mars 96 Russian mission, which crashed into the Pacific together with all its instruments, including two seismometers under the scientific responsibility of the IPGP.

“The only seismological experiment ever carried out on Mars took place during the Viking mission in the 1970s," explains Lognonné, who is the principal investigator for SEIS. “It didn’t spot any quakes because, apart from one isolated event, all the vibrations detected by the instrument were correlated to gusts of wind.” 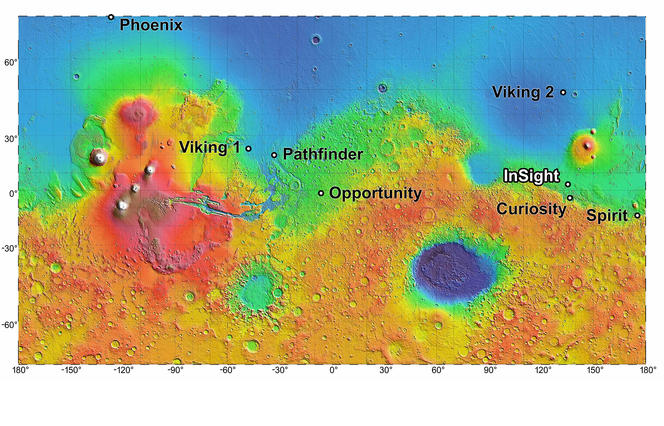 The InSight mission will set up on the Elysium Planitia volcanic plain, some 600 km from the Curiosity rover. 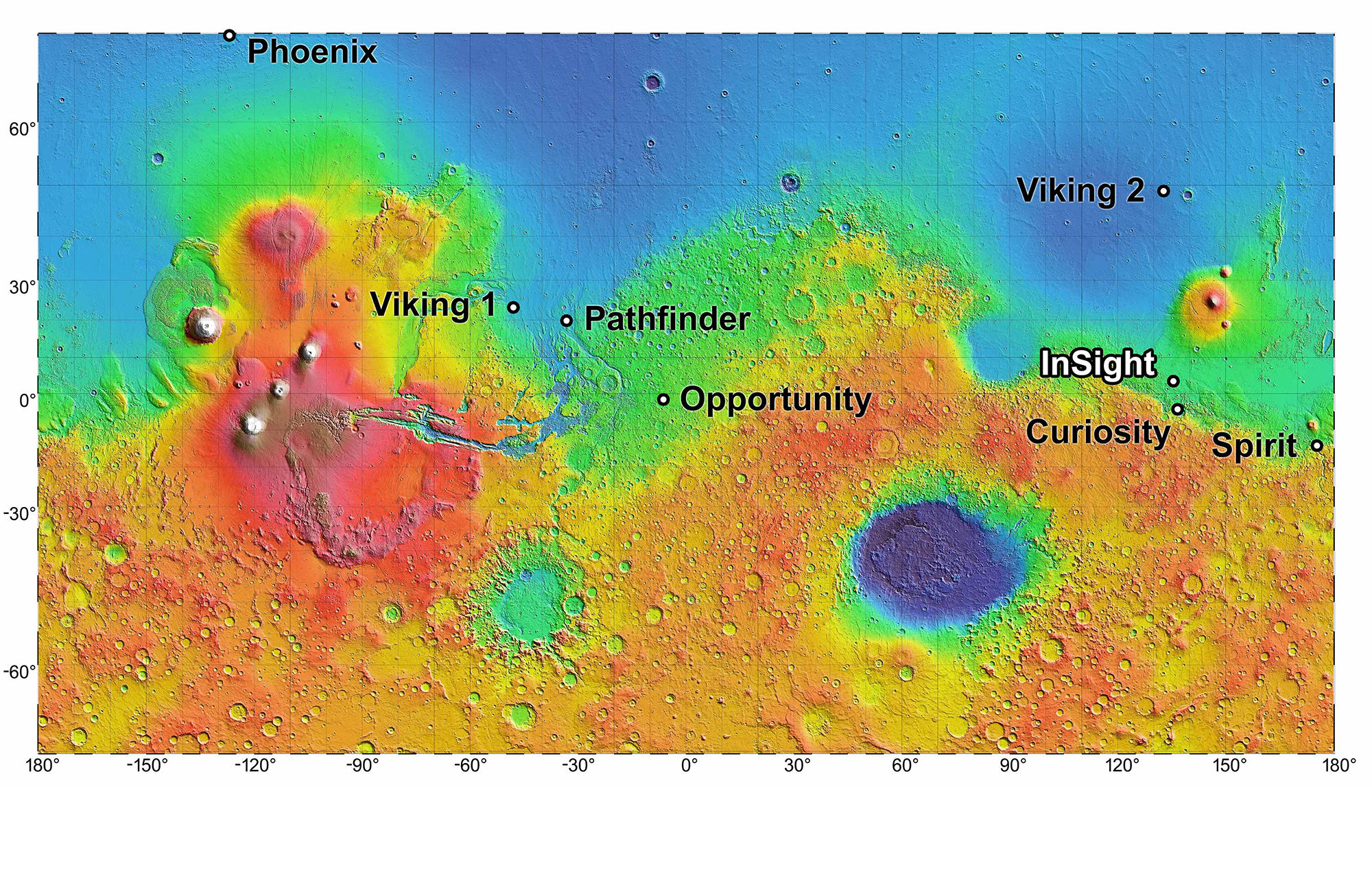 There is therefore no seismic data on Mars, even though geological activity was probably intense on the planet during its first billion years, due to tectonics associated with volcanism and hotspots. This activity has since waned, despite the fact that some lava flows on Elysium Mons are known to be less than ten million years old. “Detecting volcanic tremors would be a wonderful surprise, although this possibility was not taken into account when designing the SEIS,” Lognonné admits.

Seismic waves to see beneath the Martian crust

Theoretical models suggest that the Martian crust is probably subject to tremors similar to those on the Moon, but more regular. The Apollo programme identified about 30 shallow quakes with a magnitude of 4 to 5.5 on the Moon, spanning a period of seven years.

We expect to detect around fifty quakes a year, including ten or so with high magnitudes of as much as 5.5. The bigger the quake, the more data you can get out of it.

Unlike the Earth, the Moon, and possibly Mars, are devoid of tectonic plates. Seismic activity on these two bodies is therefore limited and due to deformations caused by their cooling. “The size ratio between Mars and the Moon should be reflected in their seismicity,” Lognonné explains. “So we expect to detect around fifty quakes a year, including ten or so with high magnitudes of as much as 5.5. The bigger the quake, the more data you can get out of it.”

Just as sound behaves differently in air and in water, analyzing the speed of seismic waves makes it possible to understand the structure and nature of the materials they travel through. The most powerful quakes deliver greater information, since high-frequency waves travel at greater depths, providing important cues about the interior of Mars, such as the thickness of its crust.

On Earth, quakes are monitored by a whole network of instruments, often arranged in seismic vaults specially designed to eliminate interference. However, the SEIS will be both isolated and exposed to the harsh conditions on Mars. “What we are interested in is the velocity of propagation of the waves,” Lognonné explains. “Without knowing their starting point, all we need is their travel time and a distance.”

When a quake is big enough, the seismometer detects an initial series of waves known as R1. This is followed by R2, the same series of waves that has travelled around the other side of the planet. The objective is to detect R3—i.e. R1 after it has gone all the way around Mars—a little less than two hours later. The interval between R1 and R3 corresponds to the time taken by the waves to travel around the circumference of the planet, which is a known length.

The researchers can then infer the velocity of propagation without having to locate the quake’s epicenter. A second method will use meteorite impacts, which produce shock waves that can also provide information.

However, the R3 waves are weakened by the tens of thousands of kilometers they have travelled, until they can only be detected by extremely sensitive and carefully set up instruments. The SEIS consists of three ultra-broad-band seismometers (between 5 mHz and 5 Hz), built by the IPGP, together with another three covering the 0.1 – 50 Hz range, designed at Imperial College and Oxford University (UK). 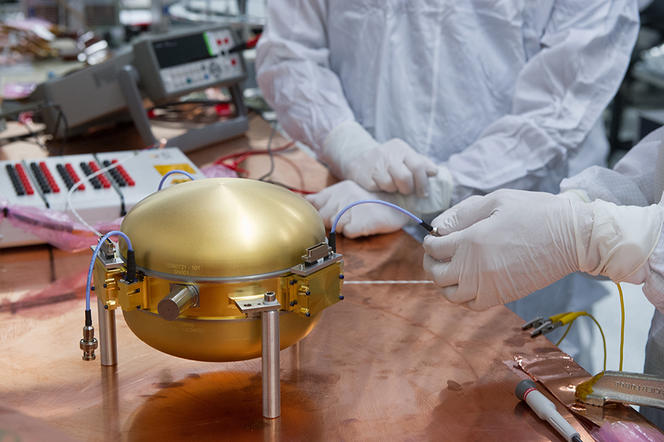 Integration of the flight model of the SEIS instrument at CNES in Toulouse. This titanium sphere, delivered by the Institut de physique du globe de Paris houses the three broadband seismometers that make the heart of the SEIS Martian seismometer. 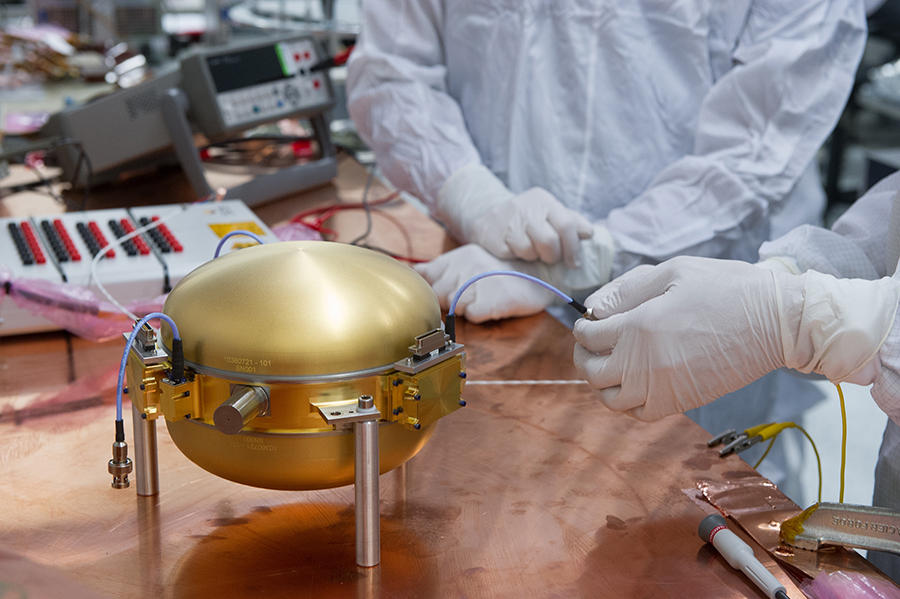 “Combining two types of sensor guarantees extremely high performance over long and short periods alike,” Lognonné points out. “The overlap in the intermediate frequency band will help in the event of failure.” Any mission to Mars must be prepared for possible incidents and for the fact that remote repairs are virtually impossible.

The instrument is therefore protected by a titanium sphere designed at the IPGP by a team led by Sébastien de Raucourt, a research engineer at the Université Paris Diderot and laureate of the CNRS 2018 Crystal Award. “The heart of the seismometer is so sensitive that it has to be kept under vacuum, shielded from atmospheric friction and dust,” he explains. “Even the tenuous atmosphere of Mars would be enough to disturb it. However, the rigid titanium structure transmits ground vibrations very well.”

The 20 cm-diameter shell also guarantees thermal protection in an environment where temperature variations can exceed 60 °C between night and day. A windshield will provide the seismometer with additional protection. The levelling system must ensure that the SEIS is positioned horizontally, regardless of ground conditions.

“One of the toughest challenges is first to make certain that the SEIS can withstand the tremendous shocks and vibrations during launch and landing,” de Raucourt admits. “It will be protected both by shock absorbers while stops designed to absorb the rocket’s vibrations will wedge the moving parts.”

The InSight lander will carry two other instruments: the German HP314 heat flow probe and the RISE.15 The latter will study variations in the axis of rotation of Mars, a phenomenon related to the state of the planet's core, thus rounding off the array of instruments that will be used to probe the interior of the Red Planet.

Video
SuperCam, our eyes and ears on Mars
Mars