Home / Articles / A Mysterious Volcanic Eruption in the Middle Ages

A Mysterious Volcanic Eruption in the Middle Ages

Home / Articles / A Mysterious Volcanic Eruption in the Middle Ages

A Mysterious Volcanic Eruption in the Middle Ages

The history of humanity is littered with immensely powerful volcanic eruptions: the explosion of Santorini around 1600 BC, whose impact on Mediterranean civilizations is thought to be behind the myth of Atlantis; the blast of Mt Vesuvius that buried Pompeii in 79 AD; the outburst of the Indonesian volcano Tambora in 1815—certainly one of the most devastating in recorded history; and the more recent blowup of Mt Pinatubo in the Philippines, whose releases into the atmosphere caused the Earth's temperature to drop by 0.6 °C from 1991 to 1993. Although the volcanic sources of these spectacular phenomena are today well established, this is far from being the case for many others that have taken place over the centuries. Until recently, this was also true of one of the most violent eruptions ever to have affected our civilization.

Revealed in the mid-1970s by studies of ice cores from Greenland and, a few years later, from the Antarctic, this mysterious explosion left its mark on the Middle Ages. "Analysis of these samples of polar ice showed that the highest peak concentrations of sulfate aerosols in the past 2300 years occurred in about 1259. We know that this type of deposit is characteristic of the outgassing caused by large explosive eruptions," explains Jean-Christophe Komorowski, a volcano scientist at the Institut de Physique du Globe de Paris (IPGP). 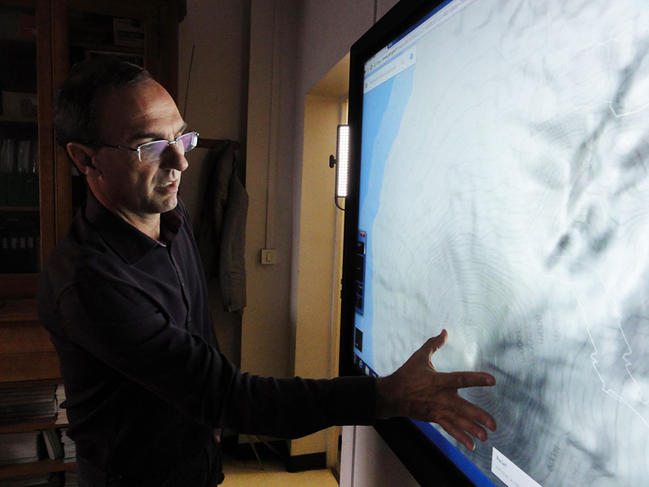 Geomorphologist Franck Lavigne set out to find the sources of the mystery volcano, which the scientific community had been seeking in vain for 30 years (image from the documentary film Le mystérieux volcan du Moyen Âge ("the mystery volcano of the Middle Ages")). 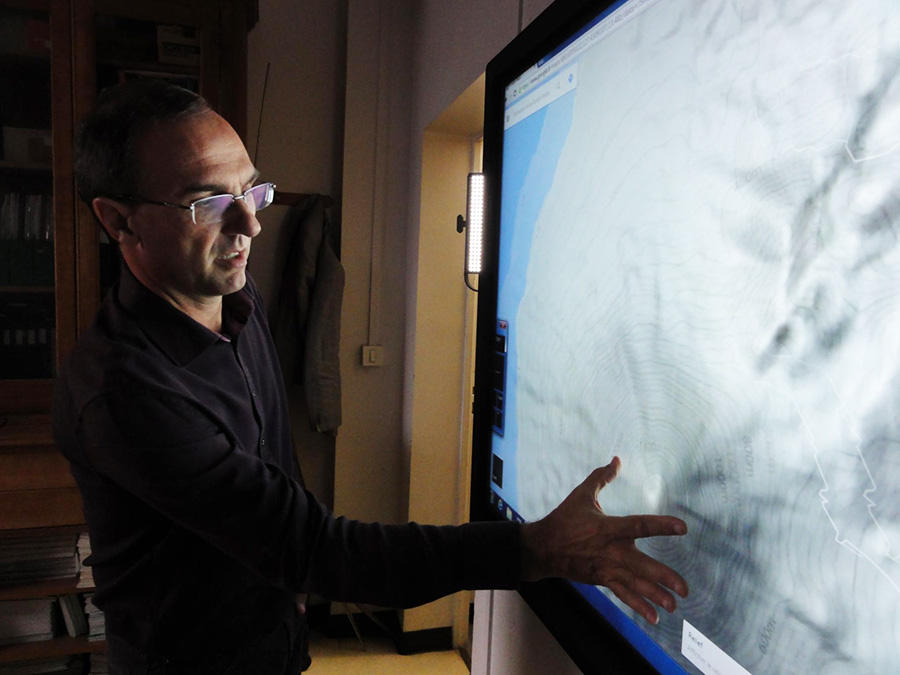 In the years following the discovery, scientists around the world pored over climate records in an attempt to locate the culprit. Geochemical analysis of tiny ash particles found in the sulfate deposits from 1259 showed that the magma that fuelled the eruption was made up of more than 70% silica. Such concentration levels are typical of explosive volcanic events. This involves the release into the stratosphere of huge volumes of magma, causing pumice and ash falls, and pyroclastic flows. The fact that material from the mystery explosion was collected at both poles indicated that it must have taken place in the inter-tropical region.

On that basis, a number of volcanoes, such as El Chichón in Mexico, Quilotoa in Ecuador and Mount Tarawera in New Zealand, were in turn suspected of being the source of the phenomenon, but were finally ruled out. "Although these volcanoes were known to have undergone major eruptions around the thirteenth century, the chemical composition of the ejected material didn't match that from the enigmatic event. In addition, the volume of matter released into the upper atmosphere turned out to be insufficient given the size of the sulfate peak of 1259," Komorowski points out. By the early 2010s, the cause of the eruption had still not been identified. It was then that the researcher, together with Franck Lavigne, a professor of volcanic geomorphology and director of the Laboratory of Physical Geography (LGP) in Meudon,1 decided to reactivate the investigation.

Back to the source

Unlike their predecessors, the two scientists decided to shift their focus from the eruptive products locked up in the climate record and concentrate on the source of the blast. Modeling work carried out by climatologist Myriam Khodri at the Laboratoire d’Océanographie et du Climat: Expérimentation et Approches Numériques2 (LOCEAN/IPSL) in Paris enabled the researchers to determine that the unidentified volcano began to reawaken in 1257. Based on the progression of the violent outburst of Pinatubo in 1991, the most important of its kind to have taken place in the twentieth century, as well as on the study of archives undertaken by Sébastien Guillet at the Université Panthéon-Sorbonne, Khodri came to the conclusion that less than three years had passed between the explosion of the volcano and the deposition of the sulfur aerosols it produced.

Analysis of the ash found in the ice cores also suggested that the eruption dated to 1257 was five times more violent than that of Pinatubo, and was strong enough to blast out 40 cubic kilometers of volcanic rock. "Given the colossal amount of material ejected, the magma chamber must have completely emptied, thus weakening the edifice, which eventually collapsed," Lavigne explains. "The current environment of our mystery volcano should be something like a caldera several kilometers in diameter, surrounded by large amounts of pumice ejected by the explosion." Researchers now knew what to look for: a volcanic edifice with explosive characteristics located in the tropical belt, with a huge caldera whose sides were covered with a thick layer of pumice. 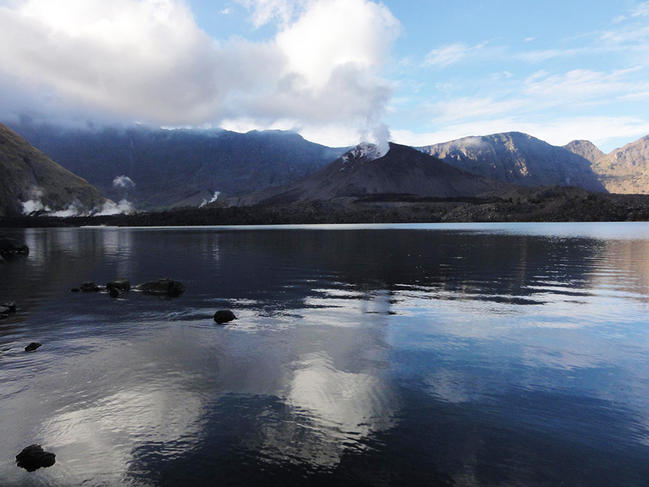 Is Mount Rinjani, Indonesia, the site of the 1257 eruption? In the middle of this crater lake, located in the Segara Anak caldera, lies a young, highly active volcano: Barujari. 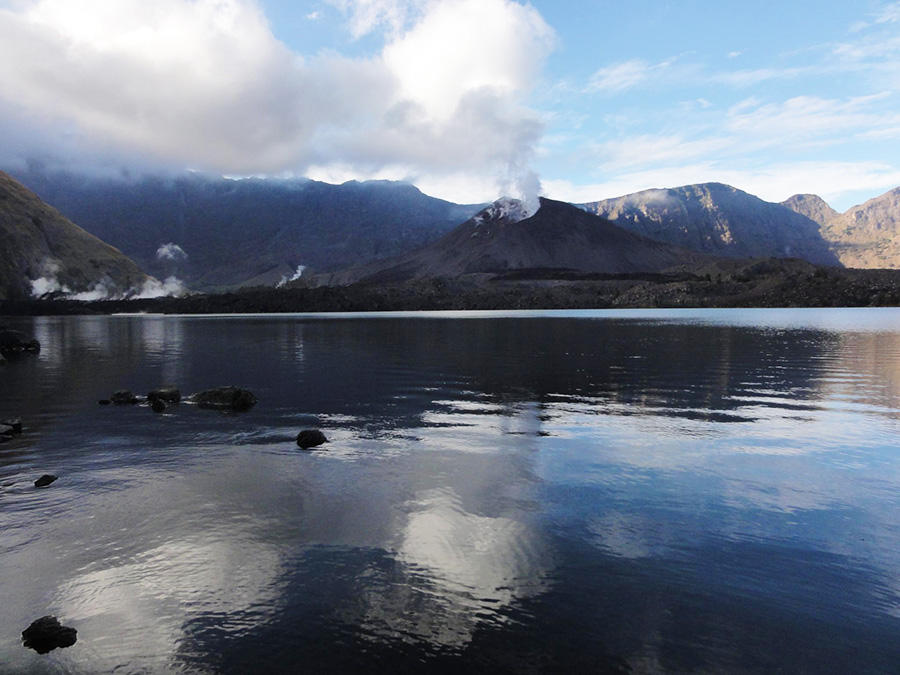 Is Mount Rinjani, Indonesia, the site of the 1257 eruption? In the middle of this crater lake, located in the Segara Anak caldera, lies a young, highly active volcano: Barujari.
P. GUERIN/KWANZA
P. GUERIN/KWANZA
Share
Share

Armed with this information, the French scientists were able to considerably narrow the scope of their inquiry. After immediately ruling out the African continent, which has no explosive volcanoes, they then eliminated all of Latin America: in this region, which has been surveyed for years, no potential candidate has ever undergone an eruption as spectacular as that of 1257. The experts then decided to focus on Indonesia, a volcanic archipelago that Lavigne has been tirelessly investigating for more than 25 years: "This huge string of islands is home to some 130 active volcanoes, a dozen of which have never been studied." Using satellite images, the geomorphologist and his team examined every Indonesian island, on the lookout for volcanoes with large calderas. They finally drew up a list of seven edifices that had never yet been dated or subjected to extensive geochemical analysis. "At this stage of the investigation, we were convinced that solving the puzzle hinged on discovering extensive fields of relatively unaltered pumice, since an abundance of this volcanic material is the sure sign of a large, very recent explosive eruption," Komorowski says.

Located just a short hop from the well-known island of Bali, the island of Lombok ticked all the boxes: huge fields of pumice were scattered across the entire region, and there was a caldera eight kilometers in length and six in width—that of  Indonesia's second highest volcano, Mount Rinjani. However, did this mean that the latter was the seat of the mystery eruption of 1257? Or was that event caused by an even more powerful volcano? To be absolutely sure, Lavigne and Komorowski undertook several expeditions to Lombok from 2012.

The researchers soon successfully identified the Samalas volcano in the Rinjani Volcanic Complex (Indonesia) as  the culprit, in the journal PNAS in 2013.

Video
In Botswana, an amazing stream in the desert
Volcanology

Slideshow
In the Heart of the "Furnace"