Home / Articles / Inside the Secret World of Combustion

Inside the Secret World of Combustion

Home / Articles / Inside the Secret World of Combustion

Inside the Secret World of Combustion

The MICCA combustion chamber at the EM2C laboratory comprises 16 injectors and is fed a pre-mixture of air and propane. The radiation on the internal wall gives an idea of the temperature distribution.
EM2C
Share
Share
Using laboratory experiments and computer simulations, scientists are seeking to uncover the secrets of combustion. Their aim is to design engines that are less polluting and energy-hungry.

It is what makes our cars run and airplanes fly, it heats most of our houses and produces some or most of our electricity, and it allows the manufacture of cement, glass and metallic materials. It, of course, is combustion. This chemical reaction is today crucial for human activities, since it provides 85% of the world’s energy. Yet combustion also raises significant environmental issues since it is also responsible for atmospheric pollution and CO2 emissions—the main gas responsible for the greenhouse effect. And researchers are more than aware of this as they work around the clock to uncover the many secrets of this reaction. They hope to be able to create new processes, new engines and new thermal power plants that are less polluting and consume less energy.

These environmental concerns have been around for some time. “Over the last 30 years, combustion research has resulted in a 1000-fold reduction in emissions of pollutant particle matter (soot, nitrogen oxides, aromatic compounds, etc.) by engines, and in some cases, doubling their efficiency—thus cutting their CO2 emissions by half,” says Thierry Poinsot, of the IMFT1 in Toulouse. “But there’s still room for improvement,” stresses Sébastien Candel, from the EM2C,2 another combustion research-specialized lab near Paris. Concrete evidence of this optimism may be seen in the commitment of European airplane and helicopter engine manufacturers to achieve an 80% reduction in the nitrogen oxide emissions of their engines by 2020 compared with 2000 levels. And airplane manufacturers are targeting a 50% decrease in CO2 emissions (per passenger-km) for their aircraft.

Over the last 30 years, research on combustion has resulted in a 1000-fold reduction in emissions of pollutant particle matter by engines.

To meet these targets, scientists are doing everything within their power. Using laboratory testing, theoretical developments and computer simulations, they strive for a detailed understanding of the mechanisms that govern combustion within the enclosed spaces in which it occurs—i.e., the combustion chambers themselves. Inside these systems able to withstand high temperatures and pressures, combustible fuels (gasoline, kerosene, methane, and so on) are burned by being put into contact with air. The energy released is then used to produce a force. “This transformation requires relatively complex systems,” explains Candel. “Aircraft engines, for instance, use a fan blower, a compressor and a turbine to eject the exhaust gases via a nozzle and propel the aircraft in the opposite direction. In car engines, the heat released by combustion generates very high pressures in the cylinder, which exert a force on the piston. The piston’s movement is transformed into a rotation, which turns the wheels of the vehicle.” 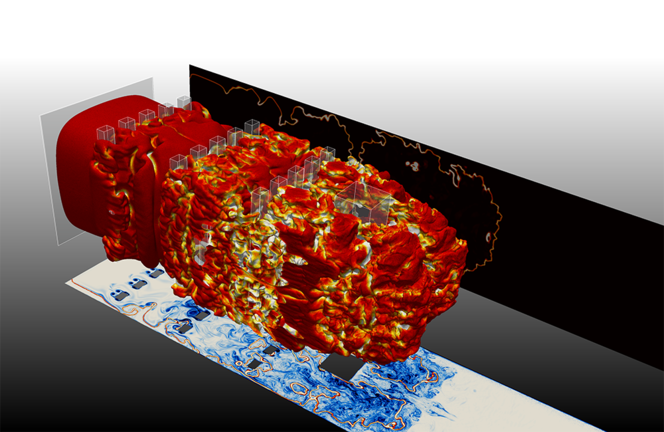 Simulation of an explosion within a structure. 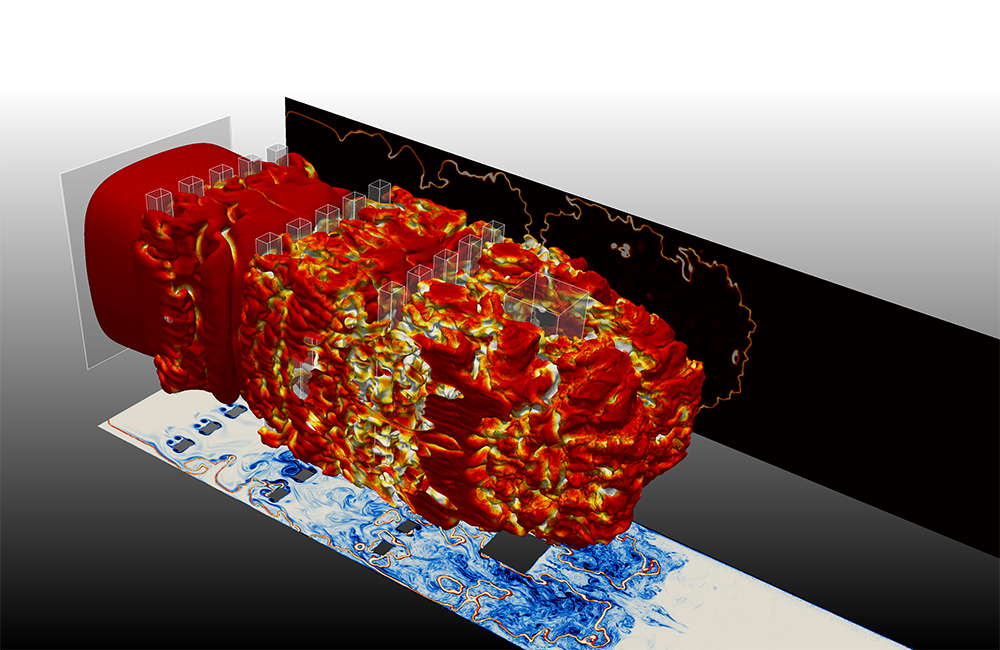 Designers of combustion chambers seek to develop systems that ensure that all of the air-fuel mixture is burned up as completely and cleanly as possible, thereby reducing to the absolute minimum the quantities of pollutants and CO2 released into the atmosphere. “The performance of a combustion chamber depends on numerous parameters, particularly its shape, the rate of injection of air and fuel, the proportions of the two reactants, and the number of injectors,” adds Poinsot.

In order to determine the optimal combustor architecture, numerical simulation has become a mandatory step. It can help predict the behavior within combustion chambers and potentially reduce the design costs and times.

To entirely model the exact mechanisms controlling combustion, scientists must solve a set of well-known fluid mechanics equations—the Navier-Stokes equations—that describe the flow and the propagation of the  flames, as well as equations governing the combustion of the various chemical species present. And this is no simple task. “Combustion is a complex phenomenon that involves on one hand turbulent flow—in which there is a continuous generation of swirls of all sizes due to the intense mixing—and on the other, chemical kinetics that comprise thousands of reactions and several hundred chemical species,” stresses Candel.

Fortunately, thanks to advances in modeling and computing power, as well as to the development of computer codes enabling large-scale simulations,3 this task can now be handled by supercomputers. These simulations, which would take several million hours of calculation time on a normal PC, give researchers access to all flow and flame data (temperature, pressure, velocity, flame propagation speed, etc.) as well as details on the quantities of pollutants emitted in a few days. Researchers are therefore able to assess the efficacy of the architecture of a new combustion chamber in advance and predict its pollution levels.

And there is more. Simulations must also anticipate any dysfunctions in the combustion chamber, such as problems of extinction and of flame stability, or worse, potential acoustic instability that could damage the structure, or even completely destroy it. “Just as one can blow into a trumpet and produce a sound by making the brass tube vibrate, in certain cases, combustion can make the combustion chamber vibrate very forcefully, putting it at risk,” explains Poinsot.

Many systems encounter this problem, from aircraft and rocket engines to gas turbines used to produce electricity, or domestic gas heaters. The current goal is therefore to predict these sources of instability using simulations and find a way to eliminate them before new engines or turbines are manufactured. This task is currently being addressed by Poinsot and his team, who are working on the Intecocis (European Research Council) project in close collaboration with the EM2C laboratory in particular.

Another challenge is to improve predictions regarding the pollutants emitted by combustion systems. Although we are currently able to accurately predict the level of production of certain chemical species such as nitrogen oxides, it is far more complex to make predictions for other substances, like soot for example.

A battery of tests

To answer all these questions, researchers rely on more than digital simulations. In their laboratories, they also study combustion in devices that provide a simplified reproduction of the conditions prevailing within industrial combustion chambers.

Inside these chambers walled with quartz, they can observe every step of the combustion process. Using high-speed cameras, they record how the flame propagates and the areas of reaction. With lasers, they can follow the particle displacement, as well as the speed and size of the particles. Microphones let them record pressure fluctuations to characterize the areas where instabilities develop. In other experiments, they collect samples to identify all the chemical species created during combustion reactions. 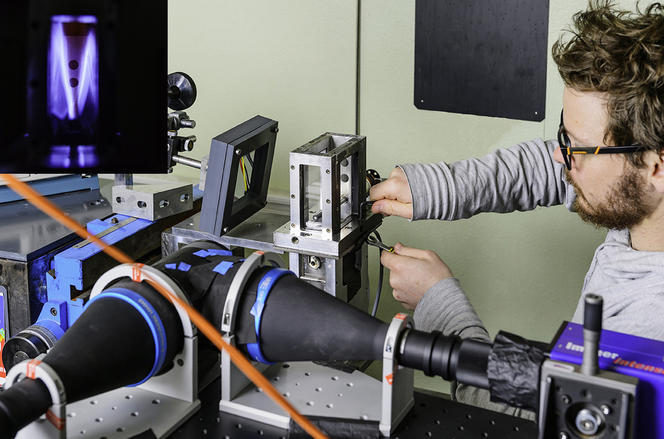 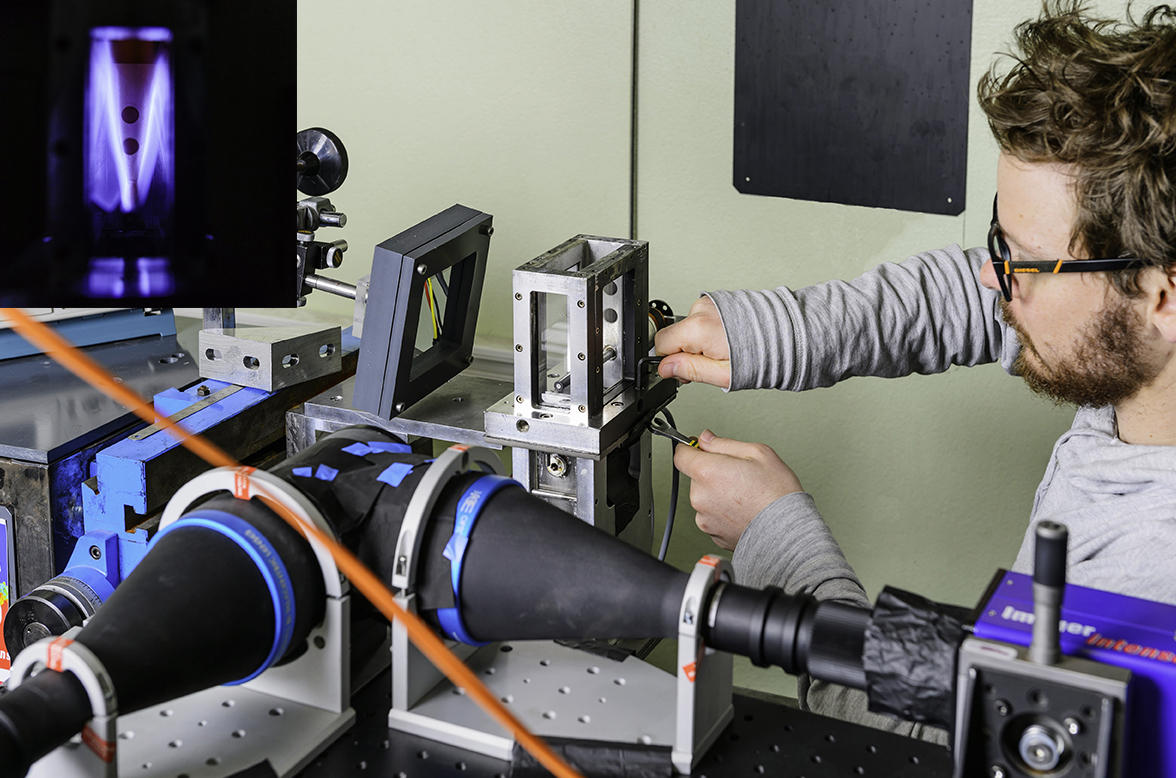 Combined, these various research instruments help scientists model precisely the phenomena that occur during combustion. In turn, this improves the predictions of computer simulations with regard to ignition, pollutant emissions and instabilities.

This analysis is all the more important since the depletion of fossil fuels, oil in particular, is pushing towards greater biofuel adoption—fuels that originate in biomass and which are obtained from raw materials derived from plants, animals or organic waste. “We need to be cautious with these new fuels and carefully evaluate the pollutants emitted during their combustion,” stresses Philippe Dagaut, of the ICARE,4 a specialized institute in Orléans.

Great care is called for with these new fuels and a precise evaluation of the pollutants emitted during their combustion is required.

This is precisely the objective of this researcher and his team. Their studies have already demonstrated that synthetic kerosene for use in aircraft derived from gasification of coal or biomass emits less soot than ordinary kerosene during combustion. But other biofuels suitable for cars pollute more, by producing greater quantities of soot and aromatic compounds than standard fuels.

Researchers clearly have their work cut out, as they continue to imagine and design the more efficient and less polluting engines of tomorrow.  French scientists are currently extremely active in working towards this goal, as attested by the fact that both Thierry Poinsot and Philippe Dagaut were recently awarded two of the Combustion Institute’s gold medals, the most prestigious award in the entire discipline.5

Opinion
The thousand and one facets of glass
Engineering