Home / Articles / French research at the heart of the Quantum Plan

French research at the heart of the Quantum Plan

French research at the heart of the Quantum Plan

Ranging from the winners of the Nobel Prize in Physics Albert Fert and Serge Haroche,1 who developed spintronics and cavity quantum electrodynamics,2 to CNRS Gold Medallist Alain Aspect's pioneering research on quantum entanglement and the quantum simulators developed by the digital transformation company Atos, France has recognised expertise in the field of quantum technology, and intends to remain an essential player in international competition. In this effort, the French President Emmanuel Macron recently unveiled a wide-ranging Quantum Plan, which was eagerly awaited by the French scientific community, but whose announcement was long delayed due to the health and economic crisis.

This plan is partly based on the report submitted in January 2020 by the member of Parliament Paula Forteza, CNRS researcher Iordanis Kerenidis, and former Safran CEO Jean-Paul Herteman. It emphasized the excellence of French research, but also the country’s lag in terms of investment, especially with respect to technology transfer to industry. The report included 37 measures – a number of which have been adopted – for defining an "ambitious national strategy".

Similar to the AI Plan presented in 2018, the Quantum Plan provides for actions in support of research (especially for quantum computers, sensors, and communications), industry, and academic and professional training. It is financed by the PIA43 and the France Relance economic recovery plan to the tune of €1.8 billion.4 An "intensive R&D effort" is underway to identify technological avenues that "could lead to a market in the next five years", points out Sébastien Tanzilli, Quantum Technologies officer at the CNRS and a member of the government's task force.5 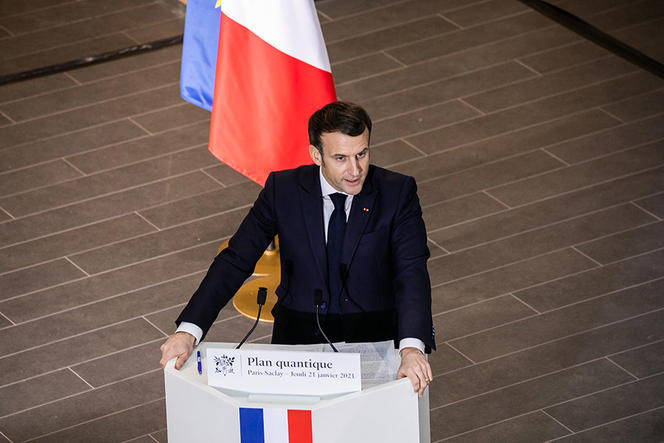 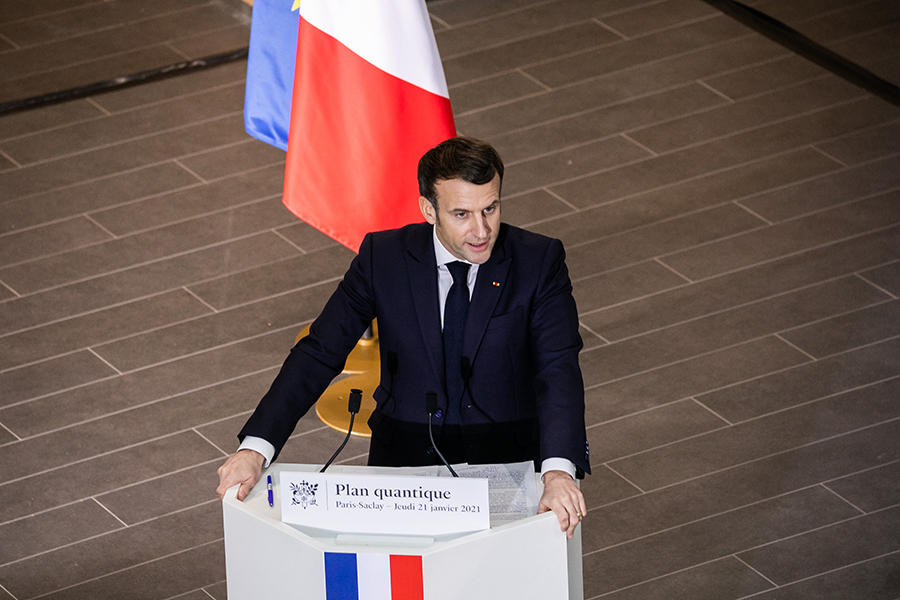 The plan encompasses numerous strategic aspects, such as encrypted communications and enhanced computing capacity, and brings together the French Ministries for the Armed Forces, of the Economy, Finance and Recovery, and of Higher Education, Research and Innovation. As a "growth sector" and a "key market", quantum technology is "an acceleration strategy whose success is closely related to expected advances in research", points out Olivier Cappé, the deputy scientific director of the CNRS Institute for Information Sciences and their Interactions (INS2I).

To meet these challenges, the plan must structure the country's driving forces in the field of quantum technology, as well as so-called "enabling" technologies, which are needed for the implementation of future quantum systems (especially cutting-edge materials and cryogenics). Quantum science is "still very much a matter of basic research", Tanzilli adds. For that reason, the French government has engaged with the country’s three main research actors concerned – namely the CNRS, CEA, and INRIA – to help define its strategy. "Thanks to its network of laboratories across the national territory as well as its interdisciplinary approach, which combines basic research, innovation, and technology transfer, the CNRS is one of France's major assets for effectively meeting the future quantum challenge and positioning itself at the forefront of international competition."

This "highly concrete" plan aims to preserve national sovereignty, especially with regard to the United States and China, who are investing massively, as well as tech giants (such as Google and IBM), which are stepping up their research effort with substantial budgets and "first-class results". Competition is also forming within Europe itself – the United Kingdom and Germany in particular are developing their own strategies – despite the joint €-one-billion, 10-year Quantum Flagship programme launched in 2018, which has already supported 19 projects, including 10 with CNRS participation across the four pillars of quantum communications, computing, simulation, and sensors. "The combination of national acceleration strategies, such as the finalisation of an agreement between France and Germany, would foster competitive innovation," says Tanzilli, who believes "there are tremendous forces in both France and Europe".

The plan focuses on the interface between industry and academic training in quantum engineering. Based on a consolidated research programme, it seeks to support visible thematic ecosystems on the national scale. Through their CNRS-associated laboratories and those of its partners, large university centres have anticipated the Plan's enforcement by initiating a structuring process in recent years.

From humanities to physics

For example, an "ecosystem for quantum technology", ranging from philosophy to industry – in other words across "the continuum of knowledge and economic activity" – is being developed in the southeastern French town of Grenoble, through the Quantum Engineering Grenoble programme (QuEnG), explains Alexia Auffèves, a CNRS senior researcher at the Institut Néel6 and coordinator of the project. Until now, the latter was financed by the UGA local university and the European Commission, with a budget of nearly €4 million over two years. With two chairs of excellence and thirty PhD thesis scholarships, including two in sociology and philosophy, its various teams are set to achieve "close interdisciplinarity". Having experts from different fields engage in dialogue, in an effort to jointly define "not solutions but rather the right questions to ask" is a sizeable challenge. Dissertations, for example are jointly supervised in two disciplines, or in groups of two with doctoral students from other fields. 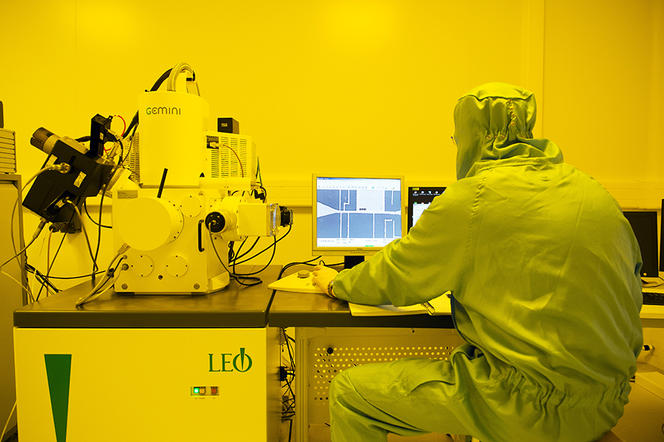 Clean room of the Néel Institute: the beam of a scanning electron microscope makes it possible to manufacture and study circuits dedicated to fundamental physics or quantum computing. 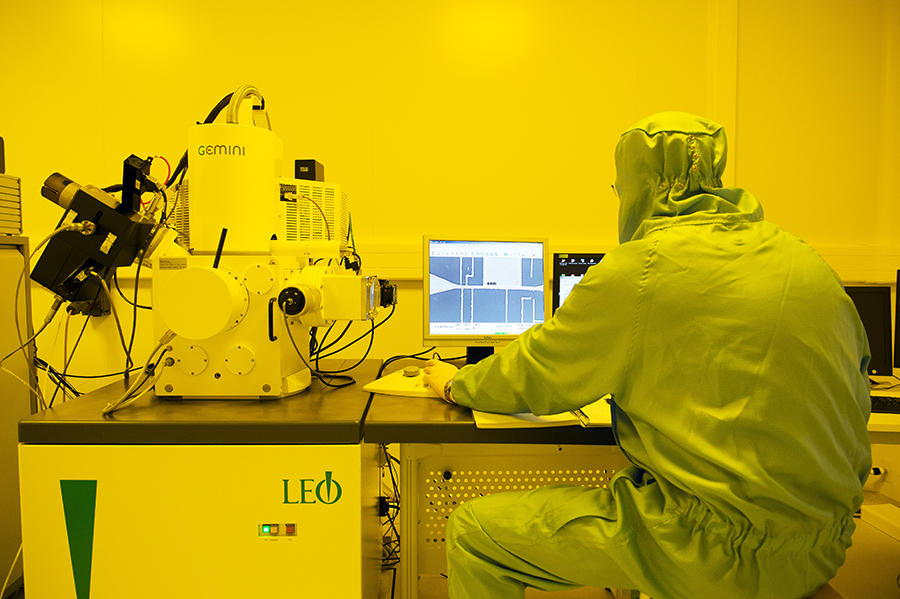 Encouraging dialogue in order to create a common culture and language is also the aim of the CNRS research federation Paris Centre for Quantum Computing (PCQC), which was set up in 2014 with the CNRS, the Sorbonne, and Université de Paris – and is now expanding to include PSL university and the National Institute for Research in Digital Science and Technology (INRIA). "In 2014, having computer scientists and physicists speak to one another was quite something!" stresses PCQC vice-director Eleni Diamanti, a CNRS senior researcher at the LIP6.7 While research is central to the Paris-based project, the federation is in talks with the Lab Quantique,8 and is also involved in the “Maison du Quantique”, which will be home to industrial actors, start-ups, and foreign scientists.

Support from industry is essential for making progress on the research issues at the heart of quantum technology. Like its counterparts in the Paris region, the Grenoble centre is fully aware of that, and relies on a dense industrial network already focused on cryogenics (Air Liquide) and microelectronics (STMicroelectronics), two quantum enabling technologies. "The QuEnG programme helped raise awareness, but the Quantum Plan goes further by encouraging industrial players to proactively fund the development of new and costly equipment adapted to quantum computing, and to make it available to quantum technology communities," sums up Tristan Meunier, a CNRS senior researcher at the Institut Néel9 and a member of the centre's scientific committee.

"The national resources of the Quantum Plan will be a game-changer," confirms Diamanti, for "beyond the funding contribution, the fact that the government is supporting French scientific excellence gives us legitimacy at the European and global level". The researcher nevertheless favours procedures and funding instruments that are "light, so that research teams can concentrate on their work", and hopes that the government does not exclusively support "important university centres, but the entire French ecosystem". 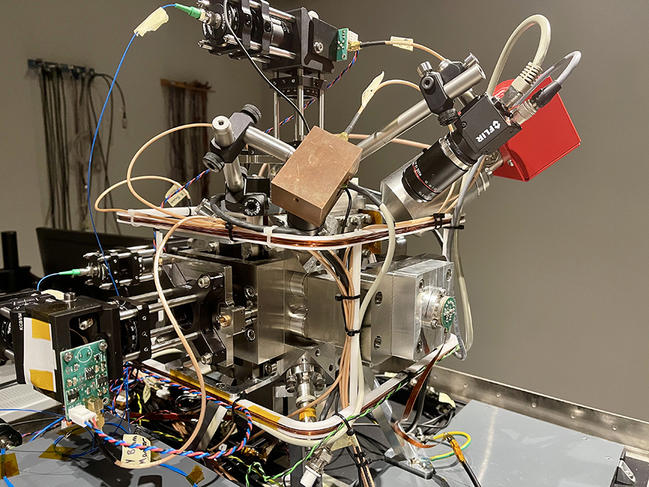 Prototype of a 3-axis quantum inertial unit developed by LP2N and iXBlue at the joint iXAtom laboratory specialised in navigation. The University of Bordeaux, the IOGS, the CNRS and the University of Limoges, as well as the Alpha RlH competitiveness cluster and the Nouvelle Aquitaine region, have launched the NaQuiDis innovation centre focused on quantum technologies. 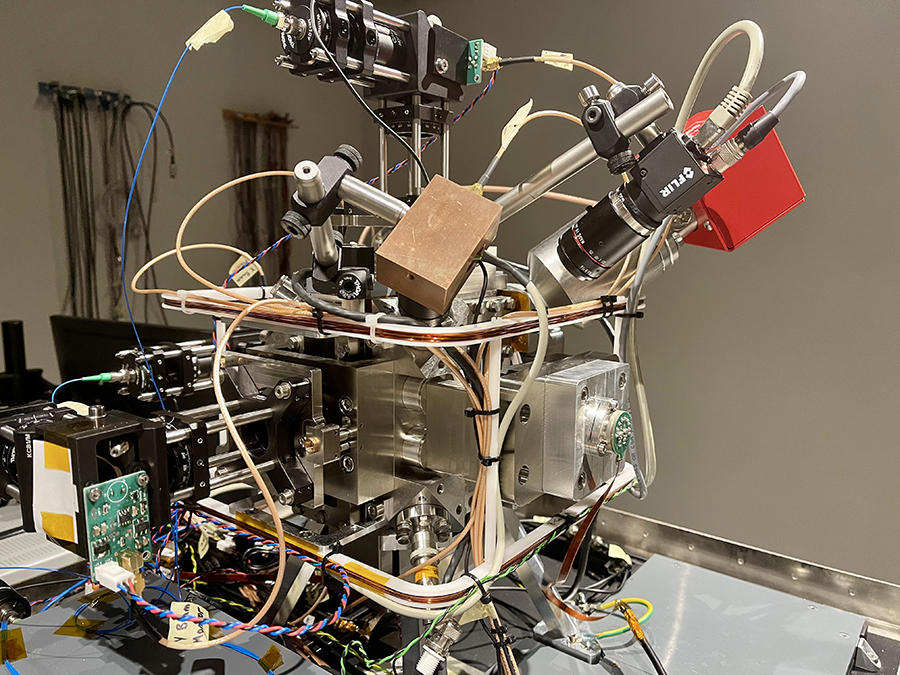 Prototype of a 3-axis quantum inertial unit developed by LP2N and iXBlue at the joint iXAtom laboratory specialised in navigation. The University of Bordeaux, the IOGS, the CNRS and the University of Limoges, as well as the Alpha RlH competitiveness cluster and the Nouvelle Aquitaine region, have launched the NaQuiDis innovation centre focused on quantum technologies.
iXAtom
iXAtom
Share
Share

These requests are shared by the third main actor involved, Quantum, which is part of the UPS (Université Paris-Saclay) and the SIRTEQ10 academic network of the Île-de-France region (near Paris). "One of the distinctive features of quantum technology is that the community is small, and the resources needed to join the race are huge, so we do not need calls for projects, because we know what each person is working on, and new actors are rare," insists Pascale Senellart, a CNRS senior researcher at the C2N, and the coordinator of Quantum, whose remit will soon expand to include members from the Institut Polytechnique de Paris, also located on the Saclay plateau (near Paris). "The structuring of sites is a tremendous opportunity to develop quantum technology at the local scale, based on the Labex model,11 in close connection with the national strategy embodied by national organisations such as the CNRS."

Masters programmes are seeing the light of day

These research centres are also getting organised with regard to educational training. After it brought together first-year MA students in both computer science and quantum physics as part of an interdisciplinary teaching module, the QuEnG scheme has now launched a new international Master's programme entitled Quantum information - Quantum Engineering for the 2021-2022 academic year. The idea is to help the next generation of young researchers adapt to interdisciplinarity at the doctoral level. The Arteq quantum technology research year, initiated by the UPS and ENS Paris-Saclay to include 10 students in 2020-2021, also offers interdisciplinary training. Intended as an additional year in the Master's programme, it is open to all academic backgrounds, with scholarships provided by industrial actors from Saclay. "Developing this training course also facilitated dialogue between research communities," enthuses Senellart. More than 30 students have already applied for next year. With the announcement of the Quantum Plan, France has all that is needed for this technology to take a quantum leap forward.

_____________________
French start-ups rise to the challenge
Several start-ups supported by the CNRS are positioning themselves in the field of quantum technology, especially quantum sensors and quantum communication systems, which are "the most mature" sectors according to Tanzilli. For example, the Quandela company is working on new computers and communication networks: co-founded by Senellart, it just won the Innov'up Leader PIA call for proposals, which was jointly launched by the French government and the Île-de-France region, and is led by Bpifrance. Set up by the team of Antoine Browaeys, a CNRS senior researcher at the Charles Fabry Laboratory, the PASQAL venture is tackling programmable quantum simulators using cold atoms able to solve the complex problems that traditional high-performance computers stumble on. Through its CNRS Innovation subsidiary, the CNRS took a stake in the start-up Alice & Bob, which seeks to develop an operational universal quantum calculator within the next five years, and raised €3.3 million from investment funds in 2020. "We must provide funding and national opportunities for these companies," says the member of the French task force, so that they are not lost to foreign capital. The Quantum Plan should see to that.

Article
Sensors, the other quantum revolution

Slideshow
Within the Kingdom of Lights
Quantum Physics

Article
The Cold that Comes from Light