Home / Articles / Dust, Blowing in the Winds of Climate Change

Home / Articles / Dust, Blowing in the Winds of Climate Change
0 comment
Earth
climatology
-A +A
article

Image taken from the International Space Station over Libya showing a dust storm stretching several hundred kilometers across the Sahara. Isolated cumulonimbus clouds are developing within the dust layer.
NASA/ISS-DIGITAL CAMERA
Share
Share
Dust from the African deserts spreads across the globe, playing a complex, but important role on ecology and the planet’s climate. New findings by a French-US team shed light on the underlying mechanisms that carried this dust in the past, and how these may change in the coming decades.

Dust from the deserts of North Africa is present across the globe. It plays an important role in the Earth’s climate by virtue of its ability to reflect and absorb sunlight, and also affects ecology through its capacity to fertilize forests and provide nutrients for seas. Yet dust levels have undergone significant multi-decade fluctuations, including the present decade of very low emissions. Previously, scientists had suggested that meteorological processes such as El Niño or the recovery of Sahelian rainfall were causing these dust fluctuations, scrutinizing the latter as a possible cause for the recent decrease in the dust load transported over the Atlantic Ocean. However, other work has shown that most of this dust is emitted from the Sahara rather than the Sahel, prompting scientists to search for another answer, which now appears to be at hand.

In a recent study published in Nature,1 CNRS2 and University of California, San Diego3 researchers demonstrate that the key driver of dust emissions over the Sahara is in fact the mountain-induced acceleration of North African winds—in particular the northeasterly Harmattan—downstream of the largest mountain ranges of the Sahara. They also show that the areas prone to strong leeward winds coincide with known dust emission source regions.

“One of our goals was to determine why the Harmattan had such a prominent role, and we quickly focused on its route, which crosses the Atlas, Hoggar, and Tibesti mountains, as well as the Ennedi plateau,” says Cyrille Flamant, one of the article’s co-authors. “The impact of these mountains is two-fold. Firstly, winds accelerate as they blow over or between mountains, allowing the Harmattan to emit and transport greater amounts of dust. Secondly, due to weathering processes, in which precipitation erodes rocky mountainsides and washes alluvium down in temporary rivers, mountains are surrounded by alluvial deposits that can be swept up by these accelerated winds. The Harmattan also passes over well-established dust sources, such as the remains of a paleolake called the Bodélé depression, whose sediments can be dispersed by the wind.” 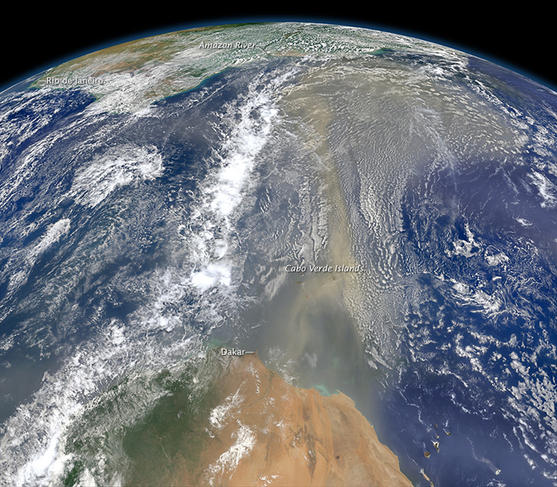 Image taken from the International Space Station over West Africa, showing a 'river' of dust being transported towards the Americas by the East African jet stream. 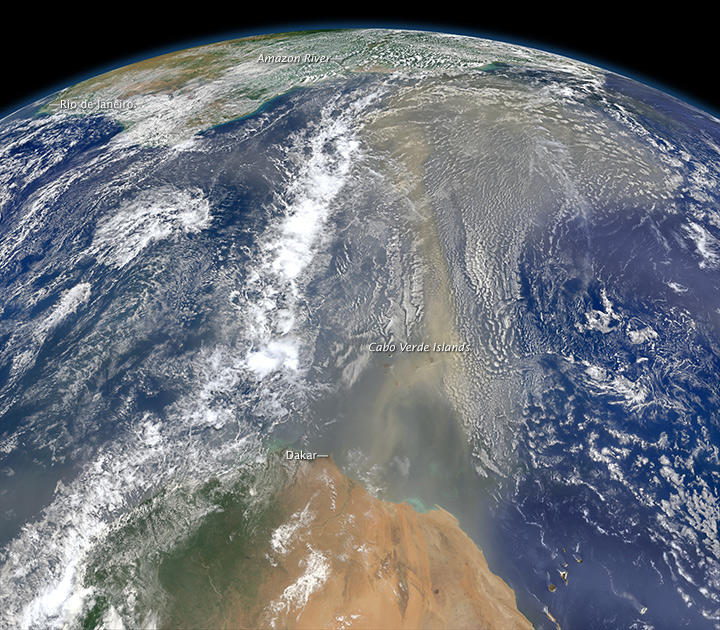 Basing their work on data from  sources as disparate as space-borne observations, Cape Verde coral samples, and near-surface wind fields generated by international meteorological forecast centers, researchers have reconstructed estimates of dust load fluctuation from 1850 to 2011. “We began by comparing satellite data of dust aerosol content over the Atlantic with coral samples from Cape Verde over a recent 30-year period,” continues Flamant. “These samples provide an accurate record of dust emissions, because as coral grows, it incorporates the dust that has settled on its surface, thus presenting layers of varying depth that help us reconstruct past emission levels. In a way, this is similar to how ice cores help determine past atmospheric conditions.”

A clear connection emerged between dust emissions and wind patterns and speeds, especially with regard to the dry and dusty Harmattan that blows across the Sahara desert. The data also helped establish that the two previous high-dust load periods, which occurred in the 1910s-1940s and the 1970s-1980s, were respectively caused by the North Atlantic Oscillation and a Sahelian drought.

Although the central role of mountains was a crucial finding, it raised new questions: what factors impact Harmattan wind speeds and patterns? To tackle this new challenge, researchers are focusing their attention on other aspects, such as the meteorological phenomenon known as the Saharan heat low (SHL), a low-pressure area caused by high temperatures which slows down the Harmattan, thus lowering the amount of dust aerosol it carries into the atmosphere. Intensification of the SHL in recent years would help explain the low-emission period that has prevailed since the 2000s. Researchers are also attempting to gauge the impact of water vapor in the atmosphere—most likely coming from the Mediterranean sea—which tends to increase temperature, thereby intensifying the SHL and further slowing down the Harmattan, thereby reducing dust emissions. 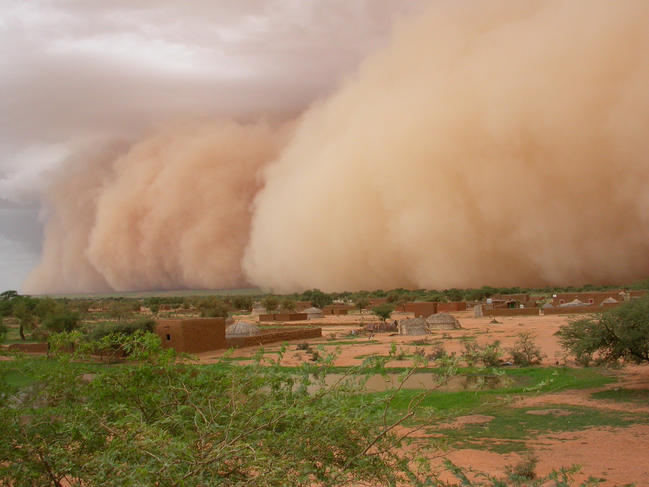 A density current made visible by the soil particles it lifts as it progresses in Hombori (Mali). This phenomenon, which is of a convective nature, is known as a haboob. 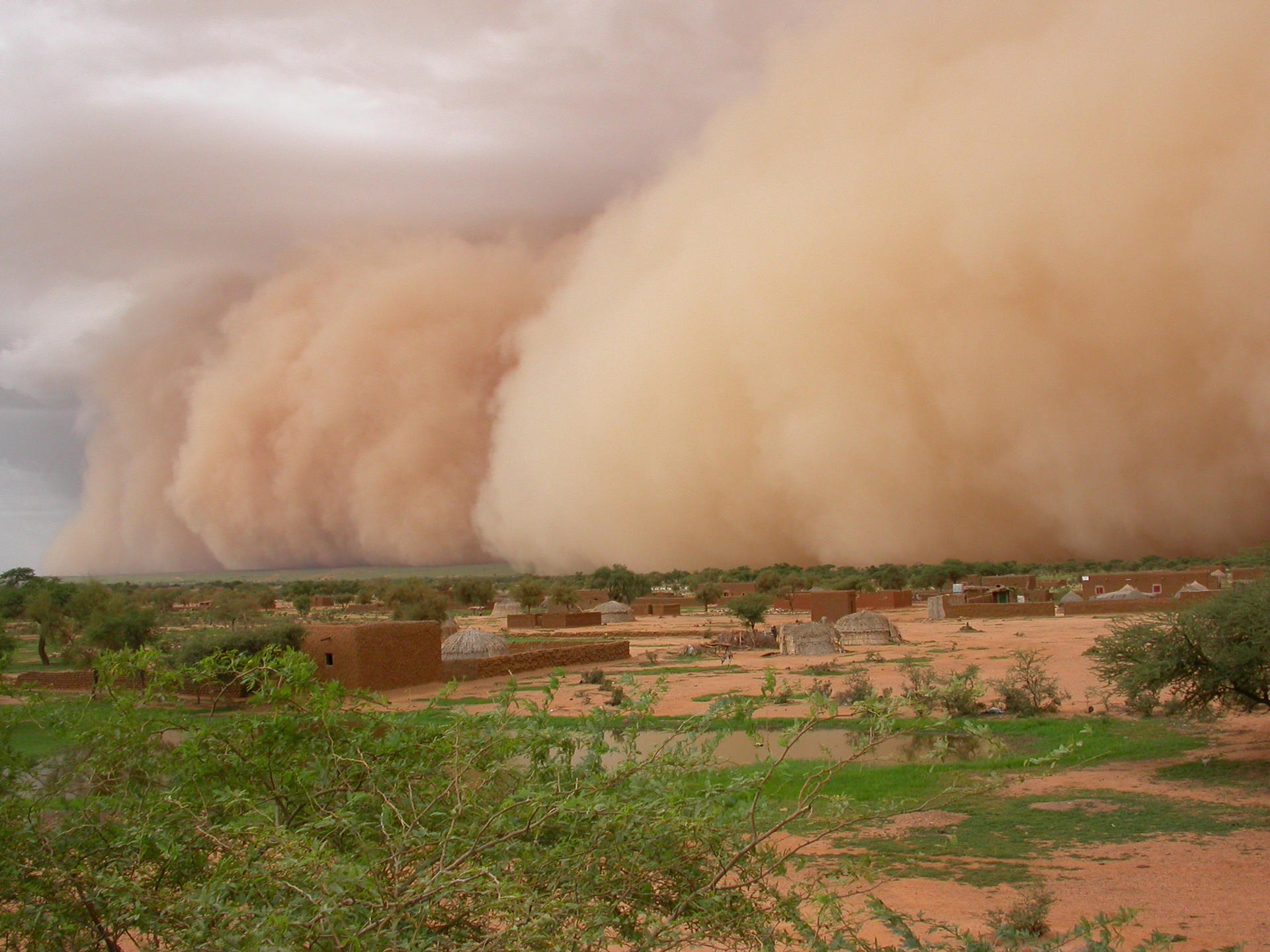 The researchers have also provided future estimates for the 21st century, suggesting that the dust load from the Sahara will continue to decrease over the next 100 years. For instance, as global temperatures rise with increased greenhouse gases, tropical air circulation will drop, with less dust being transported as a result. This may have a beneficial effect for the region—better air quality and potentially more rainfall—but as atmospheric dust is reduced, so is its direct and indirect radiative effect,4 leading to higher sea surface temperatures over the Atlantic. These higher temperatures can potentially cause more frequent and intense hurricane activity, whose devastating effects we only know too well.

“Through a better understanding of the mechanisms at play, we can think more globally about these factors and more firmly grasp how the overall climatic system functions. This will contribute to the worldwide effort to improve dust cycle estimates in climate models for the future, since dust emission is an important but overlooked factor in climate change,” Flamant concludes.

Article
Françoise Gaill, the voice of the oceans
climatology