Chantal Abergel, Viruses under her Skin

Chantal Abergel, Viruses under her Skin

G. SCICLUNA/COULEUR CASSIS
Share
Share
Her pioneering work has led to the discovery of several giant viruses. The virologist, laureate of the CNRS Silver Medal in 2014, has now received the Coups d’élan pour la recherche Française award for the excellence and potential of her research.

A sure way to catch the "virus bug" is to walk into the Marseille-based IGS laboratory,1 a stone's throw away from one of the most dramatic spots on the Mediterranean coast. Radiant, enthusiastic and persuasive, Chantal Abergel has been managing work on giant viruses in this crucible of French research since 2010, jointly with her husband, the bioinformatics specialist Jean-Michel Claverie. Her passion for these creatures that revolutionize biology and challenge evolutionary concepts is contagious. "I never give up," she says, explaining that "tenacity" (tinted with a hint of sensitivity) is her main character trait, and that 2014 "exceeded her highest expectations," as she received both the CNRS Silver Medal and the Coups d’élan award"New impetus for French research" award2 from the Bettencourt Schueller Foundation.

If they could speak, the extra-large viruses trapped in liquid nitrogen and stored on the ground floor of the laboratory would testify that for this scientist, the daughter of a Moroccan physiotherapist and a French housewife, the giant virus adventure started in 2003 with the discovery of Acanthamoeba polyphaga mimivirus (APMV).3 "Our team contributed to identifying this microorganism as a virus. It had been isolated in 1992 in an amoeba discovered in an air conditioning unit at a hospital in Bradford (UK), and thought to be a bacterium before being forgotten at the bottom of a freezer," she explains.

Not only does APMV have an incredibly large diameter for a virus (0.75 thousands of a millimeter making it visible under an optical microscope), but this monster, which is 350 times the size of the influenza virus, also has a genome made up of several thousand genes, while standard viruses normally contain a few dozen at the most. More surprising still, four of its genes code for enzymes that are absent from all other known viruses, but are present in bacteria, archaea and eukaryotes (animals, plants, fungi). In other words, in all living organisms.

It is almost as if we had discovered a flea the size of an ox.

"It is almost as if we had discovered a flea the size of an ox," explains Abergel. Above all, Mimivirus calls into question the very definition of viruses, until now excluded from the living world and relegated to the rank of parasitic "objects." A virus can no longer be described as a little intruder capable of stealthily entering a cell, taking control of its nucleus and forcing its "hostage" to produce hundreds or thousands of progeny, all of which thanks to a tiny number of genes.

As a result of this bombshell, the student who "hated school" but "loved university from her first lecture in Aix-Marseille"—where she completed her PhD on the crystallization of proteins in 1990—decided to "devote herself to the field of giant viruses," like everyone else in her laboratory. Abergel's strategy proved successful, as a secondment in 2011 at the Marine Biology Laboratory in Las Cruces, on the coast of Chile, enabled her to add to the Marseille team's tally with Megavirus chilensis. "This virus is even larger and more complex than Mimivirus. It has a very military bearing, with its "crewcut" hairstyle (the glycoproteins that cover the viruses and make them resemble bacteria so as to deceive amoebas into "eating" them), while its distant cousin the Mimivirus is much more of a hippie with its long sweet hair!," she jokes. "More seriously, Megavirus chilensis, whose gene content exceeds that of more than 150 bacteria, came as proof that Mimivirus was not a "one-off" phenomenon. It convinced us that giant viruses must be rife on Earth." 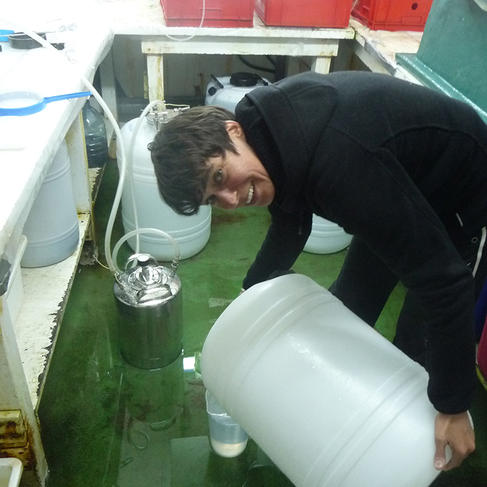 Chantal Abergel working at the Las Cruces Marine Biology Laboratory in Chile in April 2010. The viruses collected were stored in a refrigerated room at 15°C, the temperature of the Pacific Ocean at that time of year. 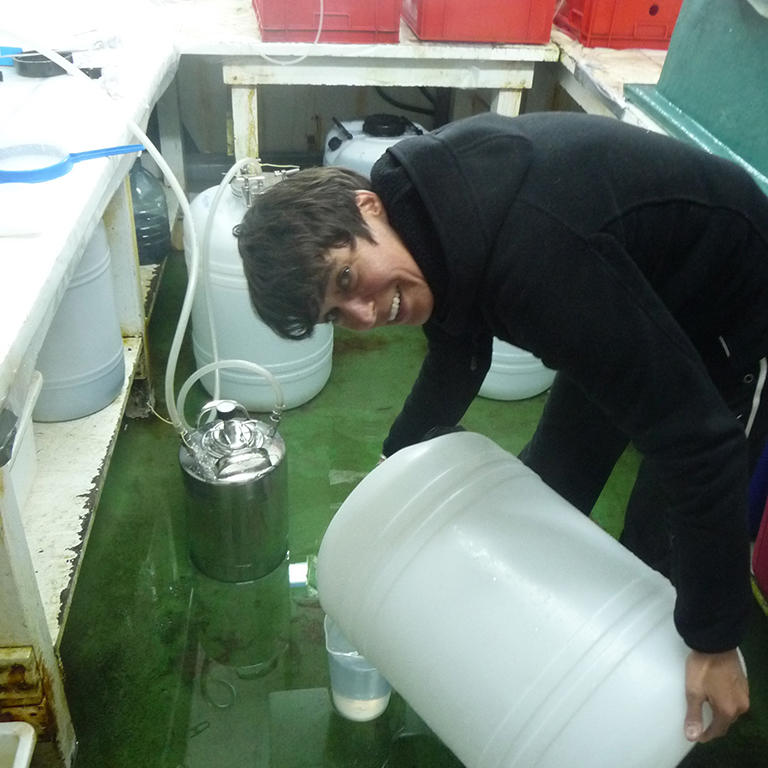 Chantal Abergel working at the Las Cruces Marine Biology Laboratory in Chile in April 2010. The viruses collected were stored in a refrigerated room at 15°C, the temperature of the Pacific Ocean at that time of year.
J.-M. CLAVERIE
J.-M. CLAVERIE
Share
Share

Further discoveries proved researchers right. Pandoravirus salinus, Pandoravirus dulcis and Pithovirus sibericum soon joined the family of giant viruses, which in principle do not present any threat to humans. "The Pandoraviruses owe their name to the fact that the team working on them was mainly composed of women.  According to Greek mythology, Pandora was the first woman," explains Chantal Abergel. "We also gave them that name because of their amphora-like shape (Pandora's box is an amphora in Greek myths) and because the study of these viruses—93% of whose genes do not resemble anything found in either other viruses or cells—leads us into the unknown."

The start of a long journey?

According to the "provocative" hypothesis advanced by the IGS, these "esthetically magnificent" giant viruses may be the distant descendants of biological entities which, millions or even billions of years ago, became the parasites of other, better performing organisms (the future cells) in order to preserve their gene pool and survive.

In great form despite the "considerable pressure" that she and her team are putting themselves under to retain their leadership in this field, Abergel confesses that she loves Marseille for its people, its colors, the sea and the sun: "more than a week's rain drives me mad," she says. Yet the family has chosen to live in Cassis, "surrounded by vineyards." As for working with her husband, it is obviously not a problem. "We complement each other," she insists, adding with a smile that "the story of giant viruses is only just beginning..."

See author's bio
A Climate in HistoryPrevious
The Titans of CERNNext