Scanner à résonance magnétique du cerveau.
Haydenbird/ iStock / Getty Images Plus
Share
Share
A cutting-edge web platform, fed by brain-scan data from thousands of persons of all ages and states of health, now pinpoints the changes in brain structure that mark the onset of Alzheimer’s in humans under 40, long before any signs of its characteristic memory disorders.

When it comes to Alzheimer’s, early diagnosis is a watchword: the sooner this neurodegenerative disease linked to shrinking brain tissue is detected, the more likely that measures can be taken to prepare for—and potentially ward off—mental deterioration, as connections between the patient’s neurones gradually collapse.

The fact remains, however, that early diagnosis doesn’t always come easy, given an existing lack of long-term data on how Alzheimer’s evolves over the entire human lifespan. To fill in this crucial knowledge gap, a Franco-Spanish research team took a nifty sideways approach by turning to comparisons with healthy subjects. By analysing the volumes of brain organs of 4000 plus subjects via an innovative Big Data platform, the scientists produced models of lifespan evolutions in the Alzheimer’s afflicted and non-afflicted, to identify exactly how and when abnormalities in brain structures start to show up.1 Findings that bode for the delivery of earlier Alzheimer’s diagnoses, and for more effective treatment. 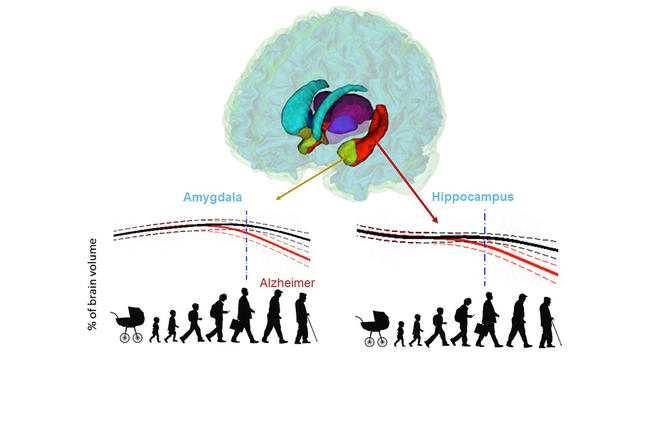 Imagery shows cerebral atrophy in patients at 40 years of age. 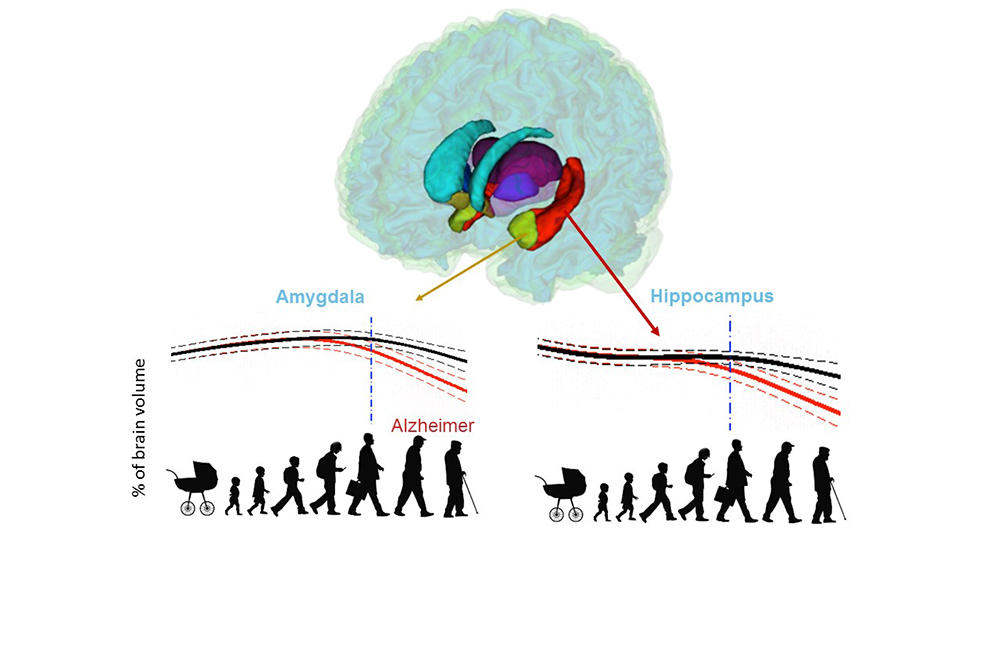 At the core of this groundbreaking project is volBrain: a Big Data processing tool born of an earlier Franco-Spanish collaboration. When Pierrick Coupé of the LaBRI2 and José Vicente Manjón of the ITACA3 hatched a technique for automatically analysing MRI (magnetic resonance imaging) brain-scans, they “decided to set up an open-access web platform so that as many researchers worldwide as possible could benefit from it for free,” reports the French half of the duo. Since 2015, users on every continent have been uploading brain-scan data onto the platform, which to date, has processed—automatically, in a matter of minutes—over 120,000 MRIs. “The different stages of the processing pipeline aim to improve the quality of the images before the various brain structures are isolated and their volumes calculated,” explains Coupé. The tool’s “ease of use, speed and accuracy” has made it invaluable for research into a range of neurological disorders accompanied by changes in the size of brain organs—among them, multiple sclerosis, schizophrenia, and of course, Alzheimer’s, well-known for the cerebral atrophy it triggers.

It was when volBrain was set to work on a particular dataset in 2015 as part of the 3C Study probing into the links between vascular diseases and dementia, that researchers noticed something peculiar, recalls neuroscientist Gwenaëlle Catheline of the INCIA.4 “We observed that the hippocampi of subjects who ended up developing Alzheimer’s displayed differences seven years before diagnosis of the disease—in other words, at a period when nothing set them apart in terms of memory and behaviour. This got us asking: when exactly does the brain of someone who will develop the disease start evolving differently from that of someone who won’t?”

The answer wouldn’t be found from existing data. “The main obstacle is that we have no data that follows subjects throughout their lives—for example yearly MRIs for the same individual over an 80-year period—which would allow us to trace the pathology’s trajectory,” points out Coupé. So, the researchers tackled the question from another angle. “We reconstructed this trajectory from masses of individual images from subjects of all ages,” the LaBRI researcher continues. “We drew on several open-access databases to get data on over 4000 control subjects and patients with Alzheimer’s, which we merged into a very big database.”

After gauging the brain-structure volumes of all the subjects via the volBrain tool, the researchers fed the data into two separate models. First, a model of “normal” brain evolution, reflecting 2944 healthy subjects aged 9 months up to 94 years. Second, a model of the average effect of Alzheimer’s on brain organs, based on data from 1385 sufferers aged 55 to 96 years, coupled with data from 1877 younger subjects who also contributed to the first model, on the assumption that the childhood and early adulthood of both populations are likely to be similar.

Comparisons of the two models strikingly identified which brain organs in the Alzheimer’s-afflicted are affected—and when. In this way, the study singles out the earliest-known biomarkers signalling development of the disease, namely atrophy of the hippocampi by age 40, followed by that of the amygdalae at around age 40. Results also indicate an enlarging of the lateral ventricles at about age 40, but as such enlargement also occurs in ageing healthy subjects, it is less telling an indicator of Alzheimer’s, especially among older persons.

The earliness at which Alzheimer’s starts wreaking effects on brain structures highlights a sobering reality. “Therapy is inadequate,” notes Catheline, “because medical treatment intervenes at a late stage of the illness, making it harder to counter its effects pharmacologically.” On the upside, she believes that the team’s study will now open up new avenues for treatment. “Pharmaceutical labs have been pulling out of the race because studies are too expensive, but our results and the volBrain tool promise to reduce the cost of clinical testing by diminishing the number of subjects needed. By cutting costs we hope to promote the development of new therapies—and the more alternatives that are tested, the greater the chances of fine-tuning an effective treatment.”

In addition, the study confirms the utility of developing volBrain—currently dedicated to academic research—as a diagnostic tool. Indeed, by measuring brain-structure volumes, volBrain offers a valuable quantitative basis on which to hang diagnoses “whereas clinicians tend to only make qualitative visual assessments of MRIs,” Catheline indicates. To steer volBrain in this new direction, Coupé reveals the “recent signing of a contract with Artificial Insight to market the tool and hopefully bring it into clinics.”

In the meantime, the research team is continuing to explore the effect of Alzheimer’s on brain structures. The team’s latest developments, says Coupé, include “a module that can analyse the subfields of the hippocampus, useful for tracking the alterations each undergoes.” “Different parts of the hippocampus seem to be impacted differently by the disease,” Catheline explains. “By continuing our Big Data studies at a finer scale of analysis, we hope to find out more on the evolution of this pathology,” she concludes.

Article
The new frontiers of the living world
Alzheimer's

Article
How Real are False Memories?