Alain Aspect in 2005.
Jérôme CHATIN/CNRS Photothèque
Share
Share
The CNRS physicist Alain Aspect has been awarded the Nobel Prize in Physics 2022, along with his colleagues John Francis Clauser, from the US, and Anton Zeilinger, from Austria, "for experiments with entangled photons, establishing the violation of Bell inequalities and pioneering quantum information science”. Here below, the portrait we published after he received the CNRS Gold Medal in 2005.

Settling a 70-year-old dispute between Bohr and Einstein, breaking through a supposedly "insurmountable" barrier to absolute zero, or producing the first Bose-Einstein condensate of metastable atoms, Alain Aspect's career is studded with numerous achievements. He made many breakthroughs in one of the most complex of scientific disciplines: quantum mechanics. "The concepts of quantum physics are outrageously counterintuitive," he warns, from his office at the Orsay-based Institut d’Optique.  A CNRS senior researcher and professor at the renowned Ecole Polytechnique, he is also a member of both the French Academy of Sciences and the Academy of Technologies. 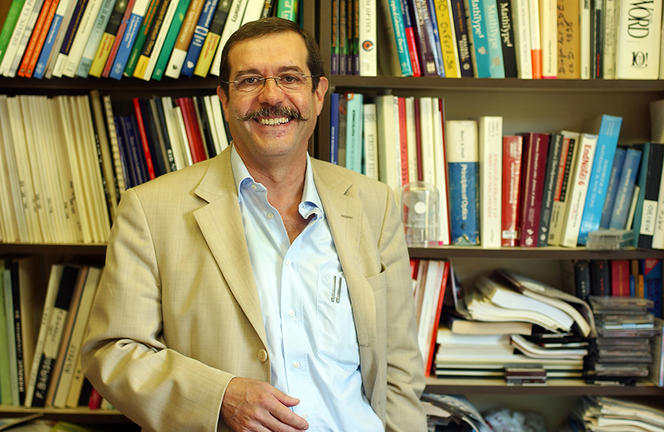 Alain ASPECT, CNRS Gold Medalist in 2005. Here at the Charles Fabry Laboratory of the Institute of Optics (LCFIO). 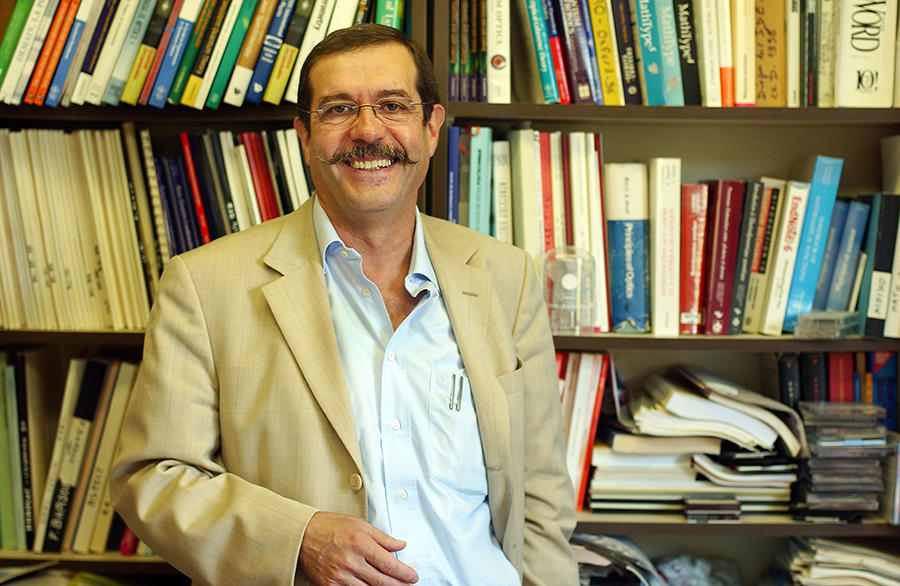 After graduating from the Ecole Normale Supérieure (ENS) in Cachan and successfully defending a first thesis in holography at the Université d'Orsay, Aspect was introduced in 1974 to the subject of his main thesis ("doctorat d'état") through a famous paper by John Bell.1 In 1982, he carried out his best-known experiments which confirmed that "quantum entanglement" for twinned photon pairs is irreconcilable with Einstein's world views (see box). He then succeeded, together with Philippe Grangier, in being first to produce single photons at identifiable moments-now called "heralded" single photons. They further revealed that a photon could travel as a wave through two places at the same time, even if it could only be observed in one location, as expected for a single particle. 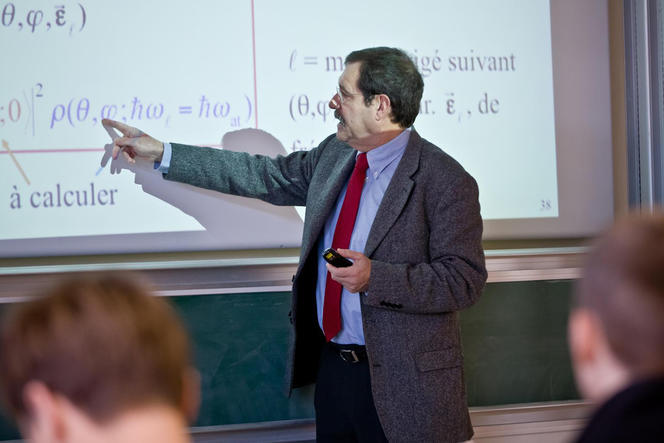 Alain Aspect, in class at the École Polytechnique in 2013. 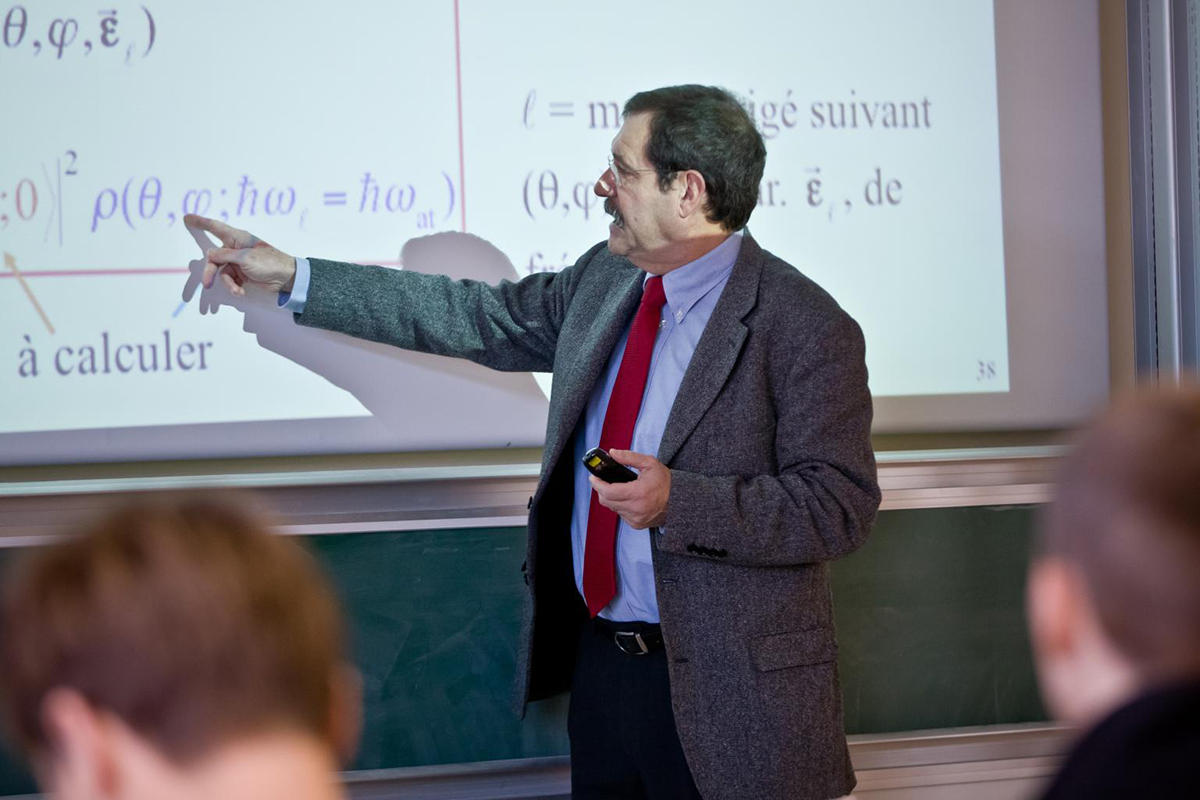 In 1985, together with Jean Dalibard and Christophe Salomon, Alain Aspect and Claude Cohen-Tannoudji launched a team to work on the laser cooling of atoms at Laboratoire Kastler Brossel (LKB) de l’ENS. They pushed down atom cooling by breaking so-called "single photon limit", getting down to one microkelvin-a mere millionth of a degree above absolute zero.
Ready for new challenges, Aspect set up an atom optics group at the Institut d'Optique at Orsay in 1992. Inspired by the 1995 revolutionary creation of the first gaseous Bose-Einstein condensate in the US, his team launched a program on atom lasers, a device promising exciting applications. In 2001, the team became the first to obtain a condensate of atoms of metastable helium, and opened a new chapter in “quantum atom optics”.

This multifaceted scientist is enthralled with his field: "the laser, the transistor and integrated circuits – and thus the computer – all have their origins in quantum physics, which also underlies the new field of quantum information." So what's next for Aspect? "It's absurd to try to plan your life when you're a researcher," he observes, "there is so much chance involved." Indeed, where will the next quest lead this scientist, who is as hard to pin down as the particles of light he works with?

Behind the scenes of the second quantum revolution...

In 1935, Albert Einstein, Boris Podolsky, and Nathan Rosen published an article, which remains a reference today, in which they revealed the existence of quantum entanglement. There are pairs of "entangled" photons, connected by a strange link. However far apart they are, if you measure the polarization of one of the photons, you can infer that of the other. This is hard to describe with images. On one hand, these particles do not communicate with each other because the information would have to travel faster than light. But on the other hand, their behavior cannot be predetermined: "The violation of Bell's inequalities show that, unlike twins, these photons do not have the equivalent of an identical genotype which could explain their similarities," Alain Aspect points out.

Flashback to 1935: according to Einstein, the lack of an image for entanglement showed that something was missing in quantum theory. Physicist Niels Bohr, however, disagreed, claiming that adding supplementary variables analogous to twins’ chromosomes, capable of predicting the values of quantum observables before being measured, would shatter the consistency of quantum mechanics. Only in 1964 did John Bell discover an inequality, which, if confirmed experimentally, would prove Einstein right but quantum mechanics wrong, or, if violated, would show that quantum theory could not be completed according to Einstein's view.

In 1974, Aspect began probing the subject, building upon the pioneering work of John Clauser et al. He understood how to test the locality hypothesis, central in the controversy. He developed polarizers whose settings could be changed every ten nanoseconds and set up a source of entangled photons with an unprecedented efficiency. The key experiments, carried out at Orsay in 1982 by Aspect, Philippe Grangier, Gérard Roger, and Jean Dalibard, showed a clear violation of Bell's inequalities in conditions closely resembling the ideal "Gedanken Experiment"—the foundation for the theoretical discussions. Quantum theory was once again vindicated. "A pair of entangled photons should be considered as a global, inseparable quantum system," Aspect concludes.  Twenty years later, it appears this work has helped in launching the second quantum revolution, with quantum cryptography and quantum information processing promises.

Opinion
The "Hanging Gardens" of Physics