The "Hanging Gardens" of Physics

The "Hanging Gardens" of Physics

Bart van Tiggelen
Far from the labs of the big cities, France boasts two scenic locations given over to scientific thinking and to the sharing of knowledge among physicists from around the world. CNRS News takes you to these gardens of knowledge. Your guide is physicist Bart van Tiggelen.

October 2010. A young, high-flying Russian-British physicist in summer clothes expounds his discovery of a revolutionary new exotic material, graphene, to a crowd of onlookers gathered in a picturesque Corsican village. The reason Konstantin Novoselov is so far from his own laboratory, just one week after receiving the Nobel Prize in Physics, is that he has come to work at the Institut d’Etudes Scientifiques de Cargèse (IESC).1 He is there for a few weeks in the company of the world's greatest specialists in his field who, like him, have chosen to spend time at this secluded site in Corsica, on the shores of the Mediterranean. There, disconnected from the everyday world and in a natural setting conducive to creative thought, they are together building tomorrow's physics. The village of Cargèse down below fully benefits from the presence of Novoselov and his colleagues, who are always happy to share their latest scientific advances, demonstrating, paradoxically, that the IESC is not as isolated as it seems.

If you believe that great scientific discoveries are always made in research laboratories, with cutting-edge instruments designed to produce and verify complex mathematical equations, think again. We physicists are the first to admit that breakthroughs rarely come like a bolt from the blue, accompanied by the cry "Eureka!" They are the result of profound, long-term thinking, fuelled by extensive exchanges of ideas and hard work. The problem is that this kind of reflection is not always possible in the hurly-burly of everyday life, with its endless phone calls and emails from colleagues. 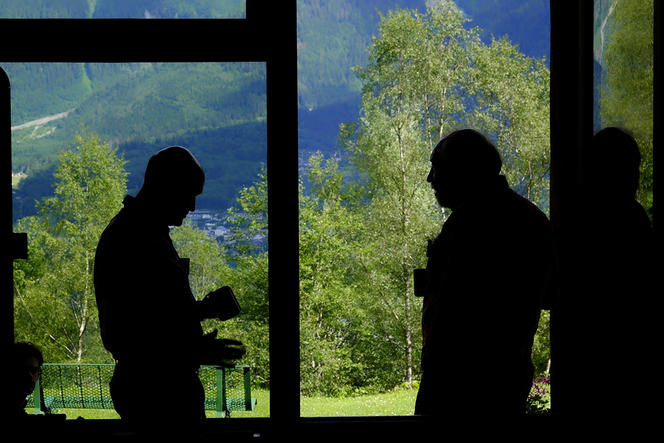 Facing the Mont-Blanc Massif, the École de Physique des Houches is a location conducive to discussion among researchers. 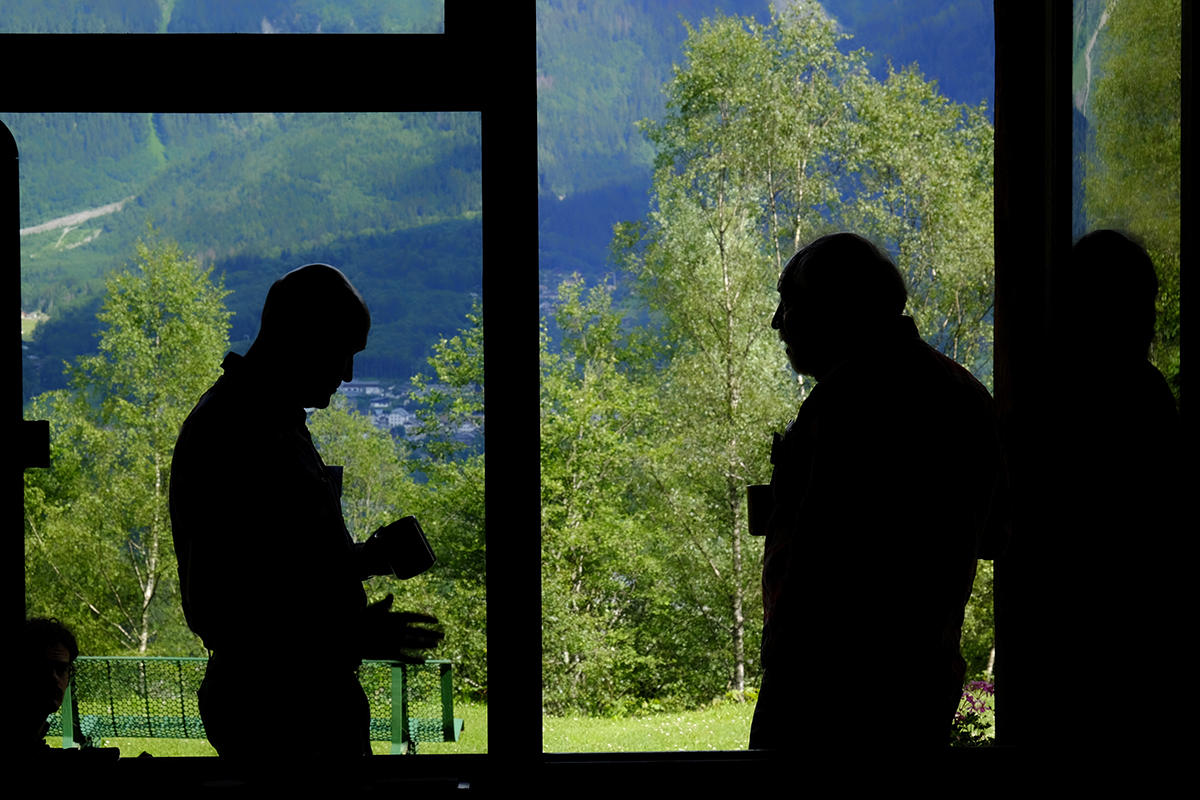 France hosts two important sites for scientific research, sorts of "hanging gardens" partially cut off from the nitty-gritty of reality, where tomorrow's physics is budding and blossoming: the IESC, on the west coast of Corsica, and the École de Physique des Houches,2 facing the Mont Blanc Massif. Established in the early 1950s by committed and visionary researchers, these gardens of knowledge set out to meet an ambitious goal: to take French physics to the highest level and catch up with other countries such as Germany and the US, which at the time were ahead in fields like quantum physics and relativistic field theory. To achieve this, the idea was to enable the younger generation of researchers to be taught by the world's most distinguished specialists, bringing them together around emerging scientific topics with the aim of sharing and advancing knowledge. The success of these schools served as an example to other disciplines, and the concept has since been taken up around the world. The founders' initiative paid off: more often than not, the innovative subjects covered in the physics schools resulted in major discoveries and prestigious awards. Besides graphene, this was the case for the Higgs boson, soft matter and cold atoms.

Some famous French physicists even went so far as to buy a property near one of the schools in order to take full advantage of their creative ferment. Claude Cohen-Tannoudji, laureate of the 1997 Nobel Prize in Physics, recalls that as a student at the Ecole Normale Supérieure, he attended a course on quantum mechanics taught by the father of the discipline, Wolfgang Pauli, on a blackboard set up in the garden of the École de Physique des Houches. He also shared day-to-day life with Julian Schwinger, the founder of quantum electrodynamics, who, with his wife, came to spend the whole summer teaching there, despite the less than basic amenities provided by the school at the time. Thirty years on, Cohen-Tannoudji is one of the world's leading physicists. 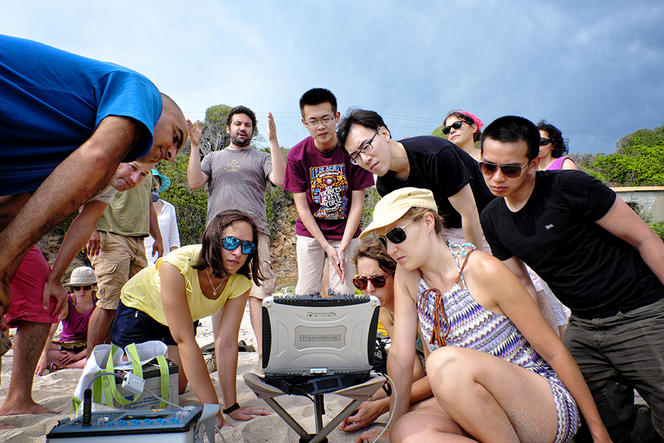 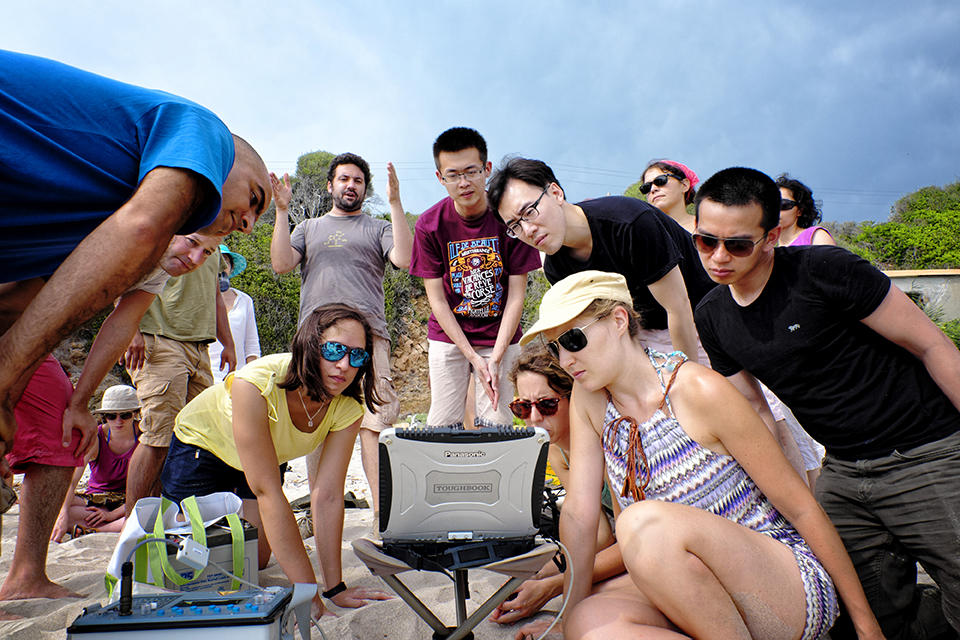 The principle underpinning these schools brings us back to the very essence of scientific research as it relates to physics, namely an attempt to understand and apply the laws of nature, and to share and pass on the acquired knowledge to the younger generation.  Although times have changed since the 1950s, with the advent of high-speed wifi, the construction of an air-conditioned auditorium at Cargèse, and a paved access road kept clear of snow at Les Houches, this has not altered the original concept that has proved so effective. This is an approach based on direct exchange and ongoing discussion in a studious yet friendly atmosphere, in which top scientists and young physicists take part in everyday life together. The leading physicists are asked to get their ideas across clearly and, despite the avant-garde, cutting-edge nature of their lectures, to remain accessible to their students at all times, including during shared meals and walks. They are required to write up their courses so as to leave a written record that can be consulted and made available to all, for all time. The younger scientists, on the other hand, fully benefit from the schools in several respects. They build up their knowledge, widen their horizons by confronting their points of view, develop their professional network, and, frequently, embark on a brilliant international career.

The success of the schools over more than sixty years speaks for itself: spending time thinking and talking freely about a scientific issue facilitates the exchange of ideas between different disciplines and, quite simply, contributes to the advance of research. This is in no way contradictory with the pursuit of excellence; quite the contrary, it is an essential condition for it. At a time when researchers are being put under increasing pressure to produce results, this is well worth remembering. 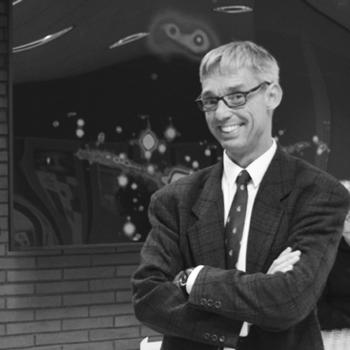