The Samnite tomb was found in an area containing tombs from the Roman period, lavish villas and craftsmen’s shops.
L.CAVASSA/CNRS-AMU
Share
Share
Pompeii still holds many secrets. While excavating an area where craftsmen had their workshops, the archaeologist Lætitia Cavassa and her team uncovered a Samnite tomb. This Italic people lived in Pompeii from the 5th to the 1st century BC, before the town became a Roman colony.

In summer 2015, you found a tomb from the Samnite period in near-intact condition. How did you make this discovery?
Lætitia Cavassa:1 A large excavation program2 on crafts has been carried out in Pompeii for the past fifteen years, aiming to find out more about the different trades, such as tanners, perfumers or potters. I myself am a specialist in ancient ceramics and, since 2012, have been in charge of the excavation of a potter’s workshop outside the town, on the Street of Tombs—the road that cuts across the burial ground of Porta Ercolano and leads to the famous Villa of the Mysteries. When this workshop was discovered in 1838, an oven was found, but digging didn’t go any further at the time. In 2012, we unearthed a series of goblets with decorated handles when clearing away a heap of pumice stones from the eruption of Vesuvius. In 2014, we extended our research to two adjoining shops and came across four potters’ wheels—the first found in Pompeii—and two more ovens… We uncovered the tomb when we examined the wall of one of the shops more closely; it was just on the other side of the partition.

What does the tomb look like?
L.C.: It’s a cubic tomb built of limestone blocks from the Sarno River, which runs near Pompeii. The tomb contained the skeleton of a woman lying on her back, surrounded by twelve red-figure AtticaFermerAttica is a region of Greece around Athens, where vases with black motifs on a red background or red motifs on a black background were made.-style vases with red motifs on a black background. Both these artifacts and the layer of soil in which the tomb was found suggest that it was built in the 4th century BC, during the Samnite period; closer examination of the ornamental motifs on the vases should provide us with a more precise date. For the moment, we don’t know how old the woman was when she died, but the anthropologist Henri Duday should soon be examining the skeleton to find this out and tell us more about her state of health. 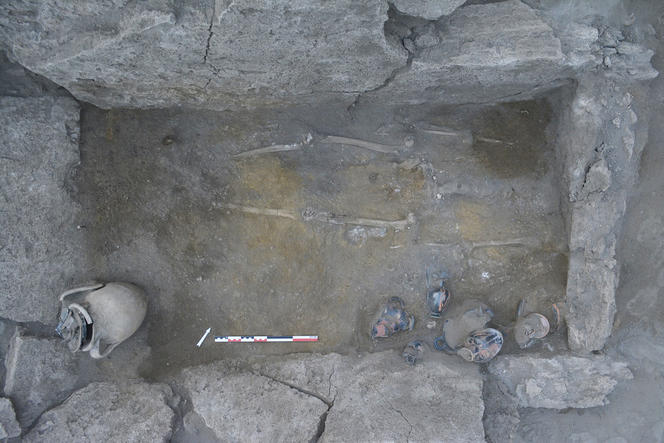 The tomb is located behind the wall of a potter’s shop. 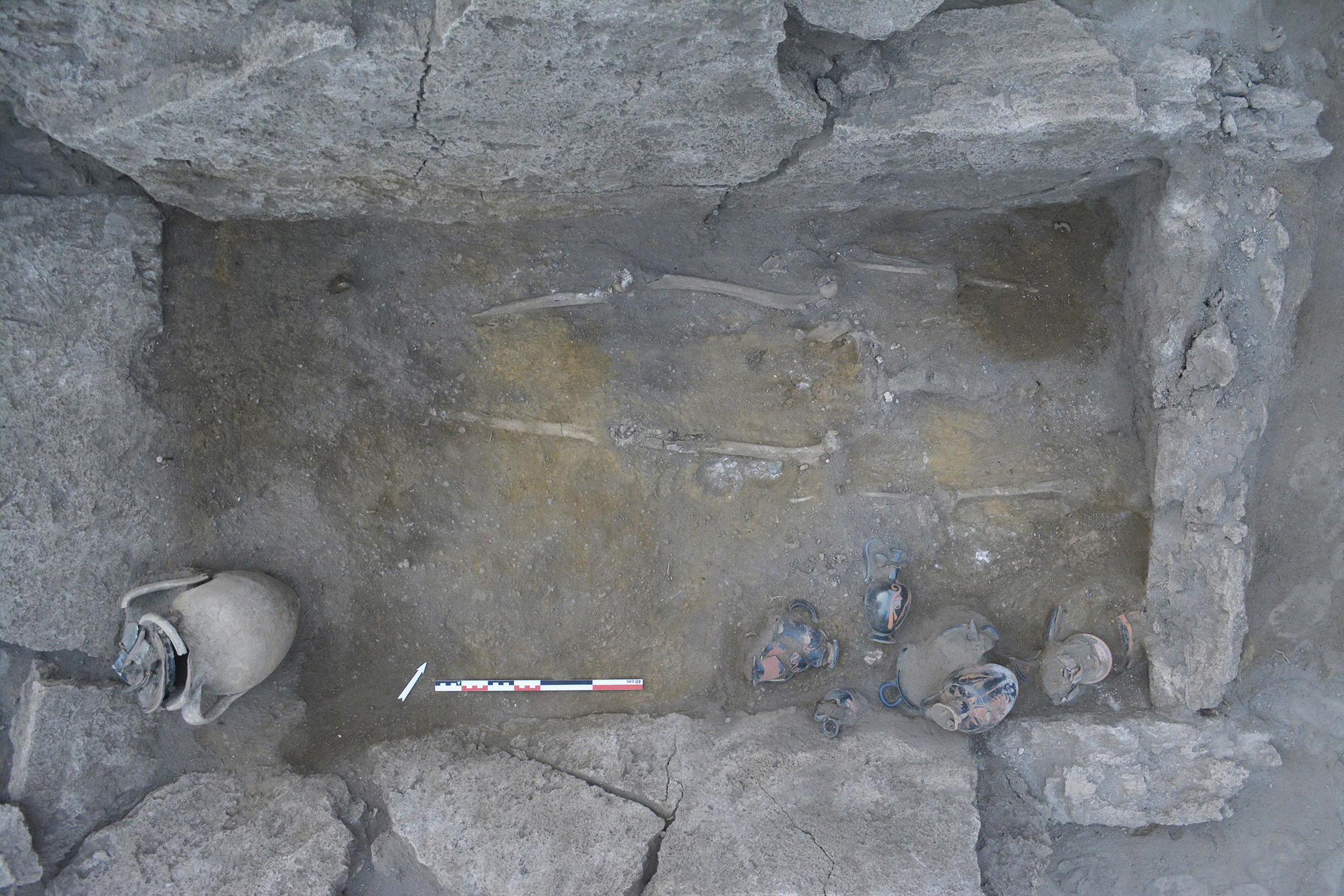 Who were the Samnites?
L.C.: The Pompeii we know is that of the Roman era, because it was preserved by the eruption of Vesuvius in 79 AD, but Pompeii was not always Roman. Since its founding in the 6th century BC, it had several influences, notably Greek, Etruscan and, above all, Samnite, over four centuries between 424 and 89 BC.

It was not until after Sylla’s victory against the Samnites, in 89 BC that Pompeii became a Roman colony.

The Samnites, an Italic people with a sphere of influence stretching from Campania (the Naples area) to the Adriatic coast, significantly contributed to the development of the town and gave it its definitive form. The Villa of the Mysteries and the Villa of Diomedes, with their characteristic atrium, were built during the Samnite period in the 2nd century BC and later adapted to suit Roman taste. This is also the case with monuments such as the Basilica, Theatre and temples of Apollo and Jupiter… It was not until after Sylla’s victory against the Samnites during the Social War, that Pompeii became a Roman colony, which is quite late in its long history.

Why is the discovery of this tomb so important?
L.C.: A few Samnite tombs were uncovered in the same area in the 19th century but, according to documents from that time, they were smaller, consisting of a cavity, a body and a few offerings that we have lost trace of. Other tombs were excavated in 1979, but they were more recent. Here we have a complete ensemble dating from the 4th century BC, which is extraordinary, even if some of the blocks are damaged. 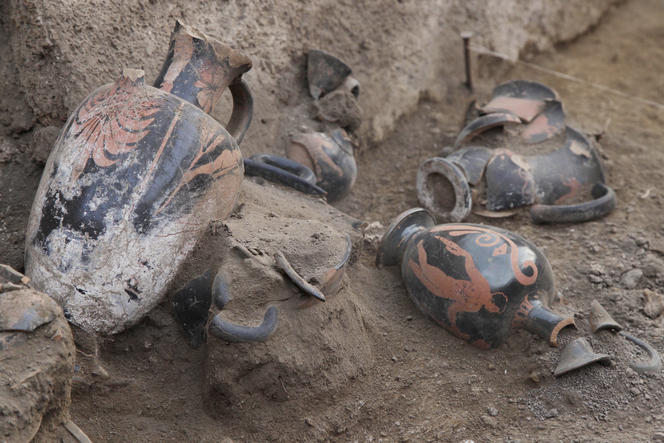 Twelve locally-made vases in the Attica style were found close to the body. 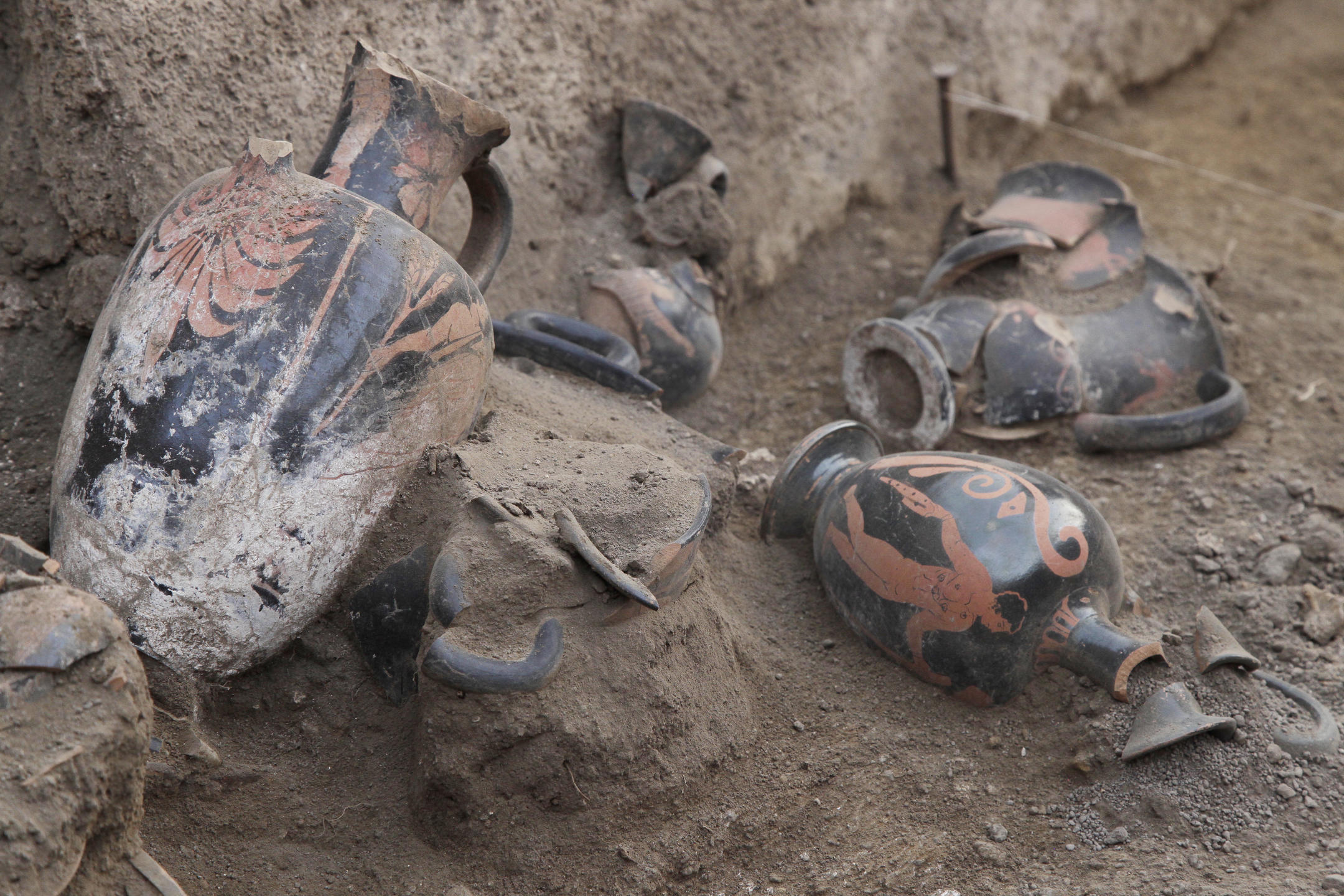 Besides this tomb, the district of Pompeii where it was found continues to raise many questions…
L.C.: It is a hybrid area with tombs from the Roman period, sumptuous villas and craftsmen’s shops stuck between the two… We still don’t know why it developed there and finding the reason is also part of our excavation campaign.

Article
“Putin’s power is wielded through a network of repressive social...
Pompeii

Article
Tracing Back the Potters of Pompeii