A Digital Twin for Notre-Dame

A Digital Twin for Notre-Dame

Point cloud of the cathedral generated from the 3D digitisation campaigns conducted by Art Graphique & Patrimoine (AGP) before the fire.
Art Graphique & Patrimoine
Share
Share
Creating a Google Earth of sorts for the cathedral of Paris, that is the ambitious project of a team of researchers. Their objective is clear: to gather all past and future knowledge about the structure within a collaborative platform.

“The restoration of Notre-Dame de Paris will be a historic building project.” And Livio de Luca, the director of the Modèles et simulations pour l’Architecture et le Patrimoine (MAP)1 laboratory, and winner of the 2019 CNRS Innovation Medal, does not want this history to once again be lost in the flames. “We will create an information system that integrates all scientific and technical data on the cathedral.”

The working group that he coordinates is preparing a “digital twin” that brings together everything we know about the structure—from construction sketches to 3D scans of its current state—one that will also be capable of integrating all future data and information. Rather than a simple replica consisting of computer-generated imagery, the plan is to construct an unprecedented database of knowledge. “It will allow the different teams involved in the project to share their expertise, and to ultimately make better decisions.”

Concretely, the various trades and scientific teams involved across all disciplines will have access to an interface like “Google Earth”2 entirely dedicated to Notre-Dame. “In addition to the spatial aspect, which can be used to examine the smallest corner of the cathedral, users will also have access to its complete history.” It’s like Google Earth being able to visualize the evolution of a city over the centuries. “Our system will offer different scales of observation over time, from photographs that provide information about the appearance of structures at a given time, to occasional and highly localized results of analyses (especially physico-chemical ones), in addition to complete or partial 3D digitisations of the cathedral.”

“Ultimately, it will be possible to click an area of the framework and obtain all known information: earlier DendrochronologicalFermerDendrochronology is a method for dating wood using tree rings. datings, analyses on carbonized remains (forthcoming), 3D data from a digital scan, etc.”

To do so, tens of billions of 3D coordinates will have to be gathered: point clouds that describe the smallest surface detail, and that have already been measured as part of various digitization campaigns. The most complete model of the building before the fire, boasting a billion points, was completed in 2010 by the American historian Andrew Tallon using a laser. In 2014, a 3D map combining laser scans and PhotogrammetryFermerTechnique that can determine the dimensions and volumes of an object by using measurements taken from photos that show it from different perspectives. will also be produced by the company Art Graphique et Patrimoine (AGP), in order to capture the entire framework, the emblematic “forest” that was ravaged in April. The most recent one was carried out just after the fire, once again by AGP.

Finally, other 3D data is also being integrated through a participatory collection of photos launched by the start-up Iconem. “All of the data will be useful, including tourist photos, although they will not all be used in the same way,” points out de Luca, who hopes to quickly finalize the multiple data-sharing agreements with all private and public organizations, as well as their permanent archiving—especially thanks to the 3D SHS3 consortium, as well as the Mémoire des archéologues et des sites archéologiques consortium (MASA) of the Huma-Num very large-scale research infrastructure.4 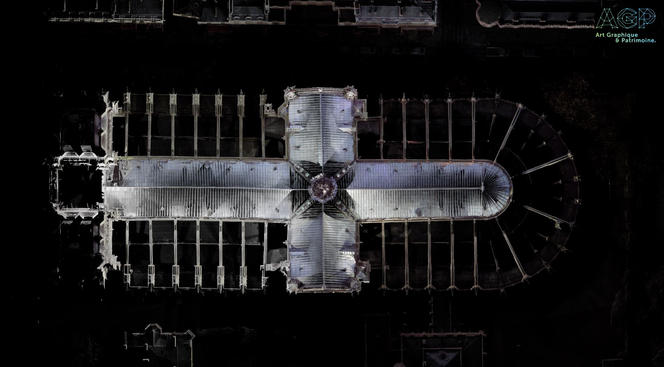 Point cloud of Notre-Dame seen from above (generated from the 3D digitisation campaigns conducted by AGP). 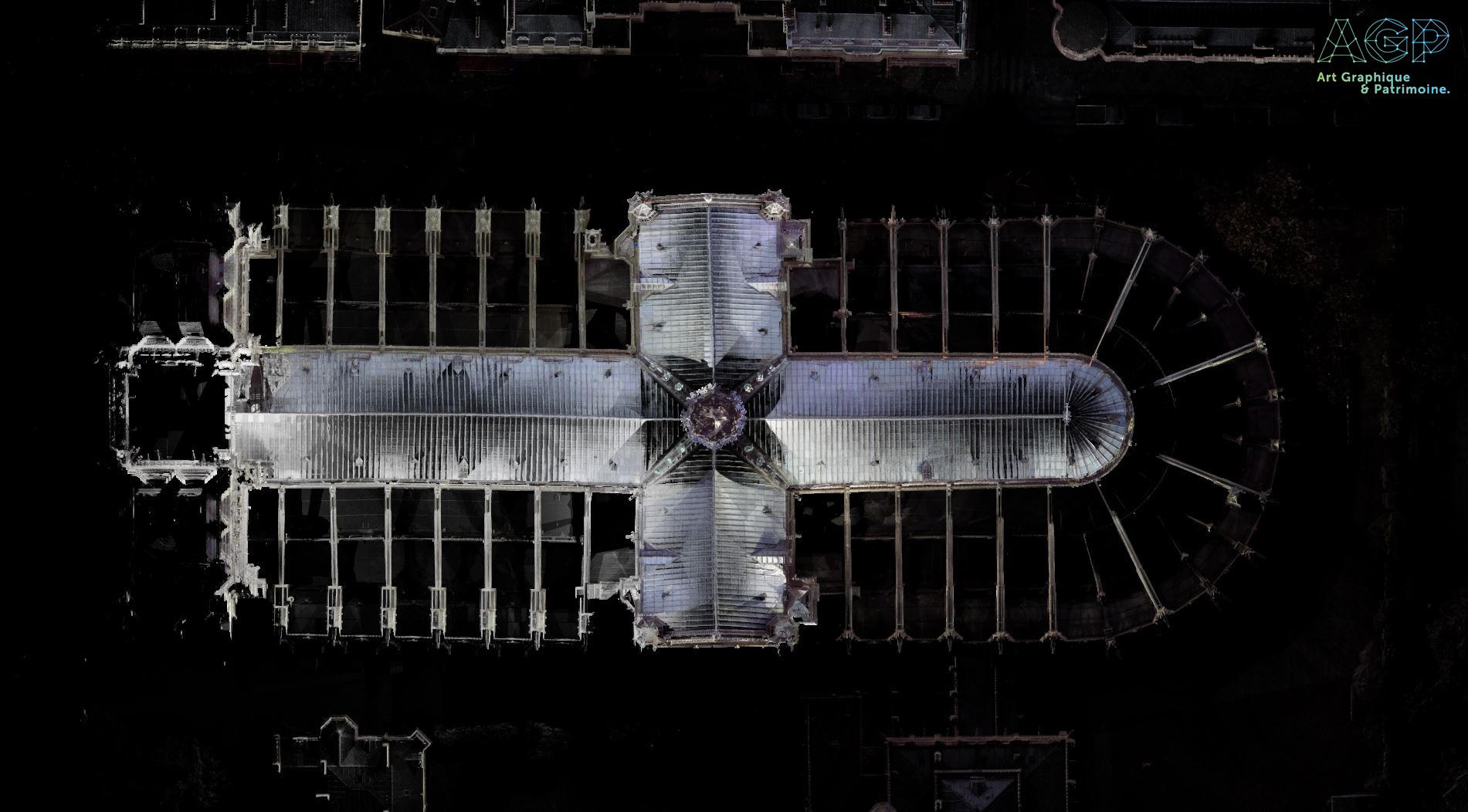 Gathering this data within a single “digital ark” is a historic challenge. A genuine archive of stone, wood, and stained glass, Notre-Dame is an illustration of the know-how that has passed beneath its vaults or towers over the last 850 years. The architectural choices made during its construction are visible in the singular and subtle curve of its pillars, in the elegant proportions of its bays, the curvature of its vaults, or the astonishing contours of its rose windows. Understanding and conserving these technical and architectural innovations enables us to reawaken the magic of this site at any moment, even if fire and the slow erosion of the centuries have erased it from our eyes.

The ambition of the software (part of which will be accessible to the general public) is first and foremost to federate the dataFermerA data management approach that gathers a number of heterogeneous databanks in the form of a shared model from the user’s perspective. within a single database. That is one of the project’s major challenges: not to confine oneself to a simple digital warehouse, but to “connect all of these documents across both time and space, as well as on a semantic level.”

Aïoli, a reality- based 3D annotation platform for the collaborative documentation of heritage artefacts

Lists of keywords, highly-precise “labels,” will notably help establish a taxonomy of every concept (material, construction techniques, architectural motifs, etc.) in order to immediately find, for example, correspondences between a type of wear and tear on stone with that of an arch or a rose window built according to a particular technique, doing so over the course of time.

This will facilitate retrospective analyses that would be impossible otherwise. And why not generate models with a view to preventing future structural risks to the structure. In order to build on all aspects of this application, the MAP team can rely on its unique experience honed during its many digital documentation projects of architectural heritage (such as the Aïoli platform, see the video above). These software building blocks will serve as pillars, and will facilitate the management, annotation, and 4D visualization (spatial and temporal) of this massive set of data.

De Luca especially wants this collaborative platform to “memorize the process of analysis and interpretation conducted by all those involved in this vast project.” This could produce documentation on the forms of intervention on the cathedral, and thereby better coordinate restoration efforts in the future. Finally, from an anthropological point of view, this unprecedented documentation will offer researchers invaluable material for understanding how scientists and professionals organize the study of architectural heritage. As a result, the restoration of Notre-Dame de Paris also marks the beginning of a literally historic digital project.

Article
Hard at Work Inside Notre-Dame

Opinion
The Framework of Notre-Dame: Putting an End to Stereotypes