A Bloom for Ocean Robots

A Bloom for Ocean Robots

Argo float test before deployment, in Villefranche-sur-Mer (France) in 2016.
LOV-CNRS
Share
Share
Robots deployed in the North Atlantic Ocean have probed the rarely observed winter growth patterns of phytoplankton and established the starting point of the bloom periods of these microalgae, vital for fighting the greenhouse effect.

If the ocean has yet to divulge all its mysteries, a particular observation tool certainly promises to help us crack some of them. The biogeochemical profiling float is a class of submersible robot whose sensors can pick up biological and chemical data in the world’s coldest and roughest waters—year round. This technological prowess has spurred oceanographers, notably from the LOV,1 to shed light on the North Atlantic conditions that trigger phytoplankton population growth in winter, as well as promoting the blooms when these microscopic marine algae rapidly multiply. Their results, presented in two recent publications,2 not only confirm some existing hypotheses, but also yield a few surprises.

A key ally against global warming

Among our main allies in the fight against the greenhouse effect are the world’s oceans, which capture and store CO2 in their depths. The North Atlantic, along the 50th parallel north, is a particularly effective carbon sink, accounting for 20 % of CO2 absorbed by oceans despite making up only 1.5 % of the Earth’s oceanic surface area. Two mechanisms—one physical, the other biological—underlie the region’s impressive carbon-uptake capacity. First, CO2 gas dissolves more easily in cold waters, vigorously mixed by rough winds. Second, the North Atlantic boasts the world’s most intense phytoplankton blooms—known as spring blooms—that not only swallow up CO2 via the photosynthesis process, but also supply food for zooplankton, tiny marine animals that assimilate the carbon, then transport it to the ocean depths where it is locked away. 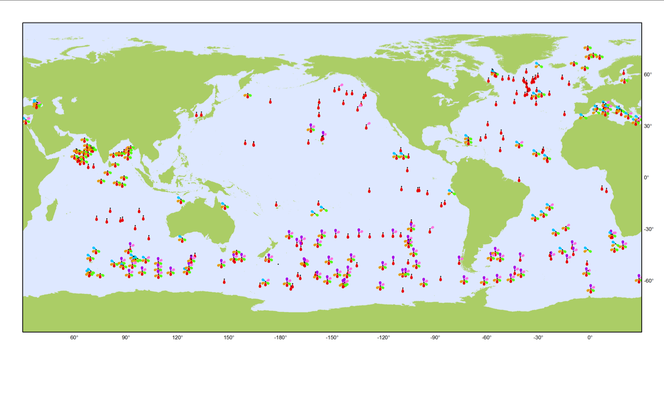 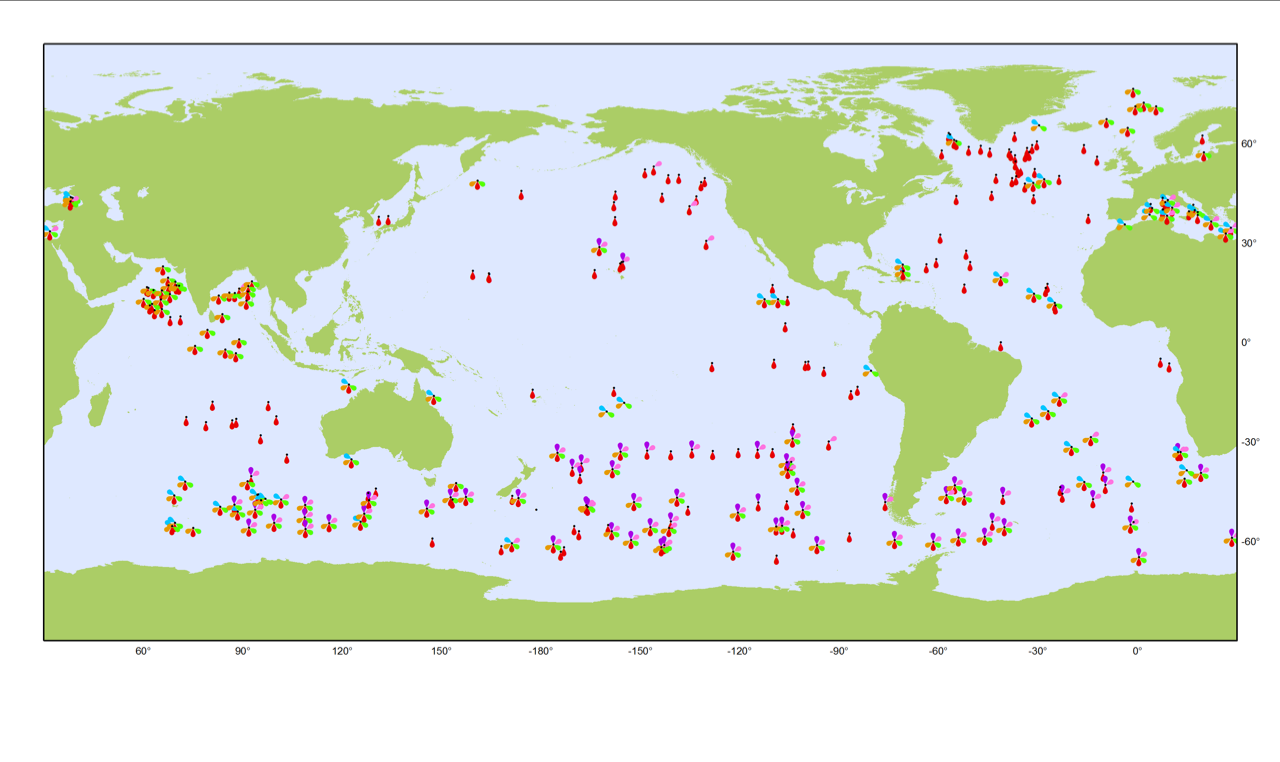 Phytoplankton blooms, therefore, are key players in the carbon-capture process, but access to data on them is not always easy. While satellite images can reveal blooms through changes in the ocean’s color—“the greener the ocean, the more chlorophyll it contains, reflecting the abundance of phytoplankton,” explains Hervé Claustre from the LOV, heavy cloud cover—“especially common in high latitudes in winter and spring”—can thwart this method of observation. Meanwhile, oceanographic missions are costly to run and limited to the milder seasons of spring and summer.

Since the late 1990s, profiling floats have been used to measure temperature and salinity levels up to 2 km depth.

These restrictions were overcome when the remOcean3 project, led by LOV researchers, developed the biogeochemical profiling float as a supplementary observation technique. Since the late 1990s, profiling floats have been used to measure temperature and salinity levels up to 2 km depth. The vertical movement of these battery-run robotic devices is controlled by a “hydraulic system that inflates or deflates a buoy-like bladder by pumping oil into or out of it.” Data picked up by the float’s sensors is relayed to scientists by a satellite antenna, offering “a two-way communication system that also allows researchers to send instructions to the robot,” Claustre specifies.

Expanding the capacities of earlier devices, biogeochemical profiling floats, deployed since 2012-2013, also “gather information on a site’s biological life and environment,” the French oceanographer continues. Particularly useful for phytoplankton observations, these floats can measure concentrations of chlorophyll (indicating plant presence), nitrate (a phytoplankton nutrient) and oxygen (produced by photosynthesis) as well as the intensity of light (essential for plant growth). Given their ability to operate “full-time, in all weather conditions, anywhere in the world,” researchers have now, for the first time, traced the yearly cycles of these minute yet essential plants in harsh North Atlantic conditions. 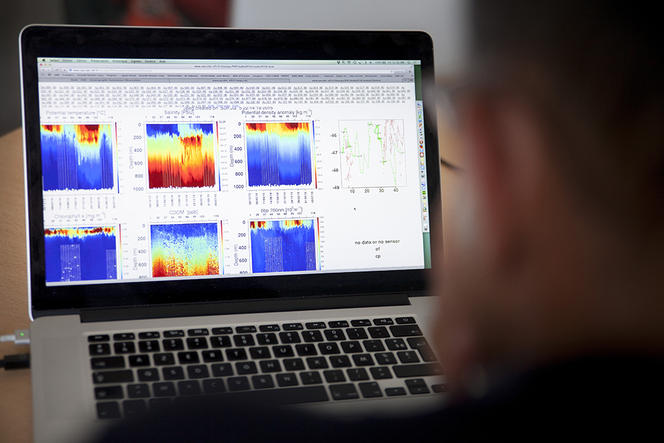 Analysis of the data collected by the floats, for example temperature, salinity and chlorophyll content. 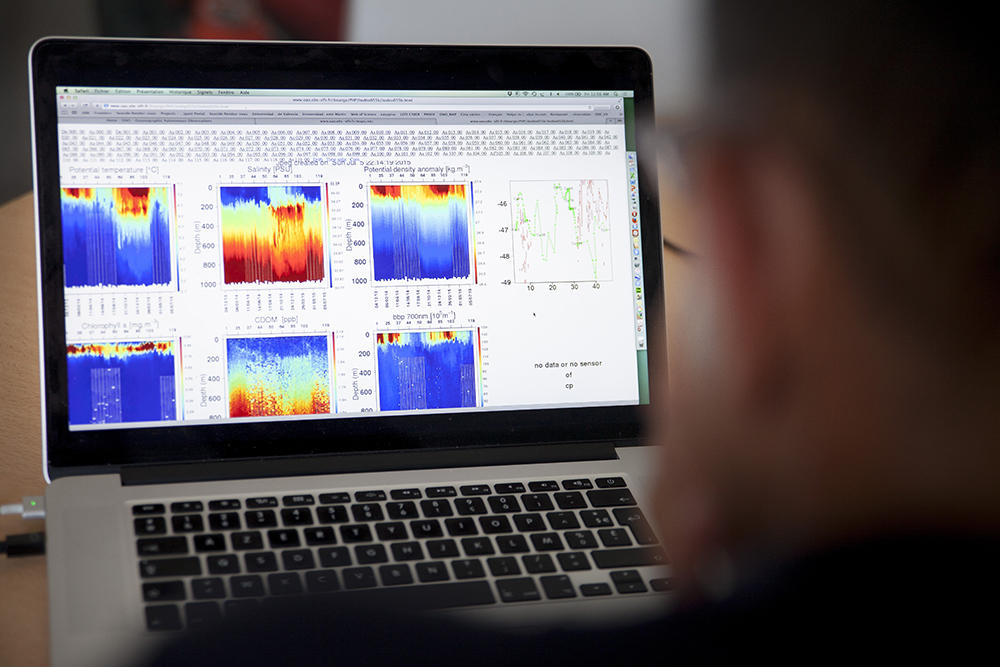 In this way, a study partnering the LOV and the Massachusetts Institute of Technology (MIT) has resolved a decade-long debate on the starting point of the North Atlantic phytoplankton bloom.4 Using data from 9 floats deployed between 2013 and 2016, the team conclusively showed that short-lived spurts of phytoplankton growth in the coldest months do not mark the start of the spring bloom, as some have argued, but merely constitute what the team calls “winter simmers.” Their findings show that the bloom proper only erupts when the ocean’s surface waters are less choppy and sunlight increases.

biogeochemical profiling floats are core tools in the Biogeochemical-Argo international observation program, launched in 2016 and rallying together 12 countries from Europe, the Americas, Asia and Oceania.

So if winter conditions don’t encourage widespread phytoplankton growth, what, then, prompts these “winter simmers”? To find out, scientists from the LOV and the Stazione Zoologica Anton Dohrn in Naples analyzed float data from 2014 to 2015, and discovered that conditions from January to March aren’t quite so bleak as once thought.5 “An unanticipated find,” Claustre adds, “due to the deployment of a new instrument in an unexplored area.” Not only does the mixing of waters in winter prove sporadic, but stints of calmer, sunnier weather also foster the “simmers,” mainly of diatoms, single-celled algae with silica in their cell walls. The team suggests that these brief blooms, while sparse, help keep up a winter diatom population which goes on to seed the spring bloom.

As well as fueling these two recent studies, biogeochemical profiling floats are core tools in the Biogeochemical-Argo international observation program, launched in 2016 and rallying together 12 countries from Europe, the Americas, Asia and Oceania to explore issues raised by our changing climate such as the ocean’s acidification or its diminishing oxygen concentration. As co-chairman of the program’s steering committee, Claustre states that “data collected by members is centralized and circulated to the rest of the international community within 24 hours” to promote knowledge about ocean issues of global concern. “A project particularly close to my heart,” he confides, “is Adopt a Float, which gives school classes the opportunity to follow the movements and readings of their adopted robots in real time.”

Article
Shells, the Sentinels of the Ocean

Video
The Viruses that Rule our Oceans