Teva Vernoux
Buildings inspired by plant architecture to better capture sunlight are the projects proposed by the brothers Teva Vernoux and Nicolas Vernoux-Thélot, a biologist and architect, respectively.

Bioinspiration involves the observation of natural systems with a view to giving some of their characteristics to spaces, objects, or services. And if sustainable development is a concern, these models are selected for the purpose of protecting the environment, in which case the approach is generally referred to as biomimicry.

Since one of us has always been fascinated by building design, and the other by plant architecture, my brother Nicolas1 and I turned to biomimetic design in architecture2 about twelve years ago. How could one build structures whose environmental footprint is as small as possible? With its geometric rules that affect the capture of solar energy, phyllotaxisFermerScientific field that studies how the primary architecture of aerial plant structures developed, namely the reasons why buds, leaves, and flowers are arranged according to highly precise mathematical and biological rules — often in spirals — on a plant's stem. struck us as a promising avenue to explore.

For our first project in 2007 we designed a "spiral house", which can be seen in Malakoff (Paris). The goal was to add a second storey to an existing house lacking natural light. To do so, we chose a spiral form that imitates phyllotaxis and captures light from the east, south, and west. 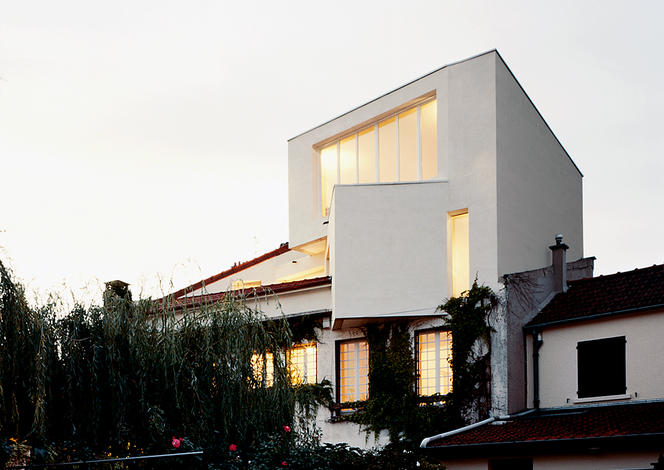 The "spiral house" in Malakoff (Paris), which saw the addition of a second storey that imitates the architecture of aerial plant structures, can capture more natural light. 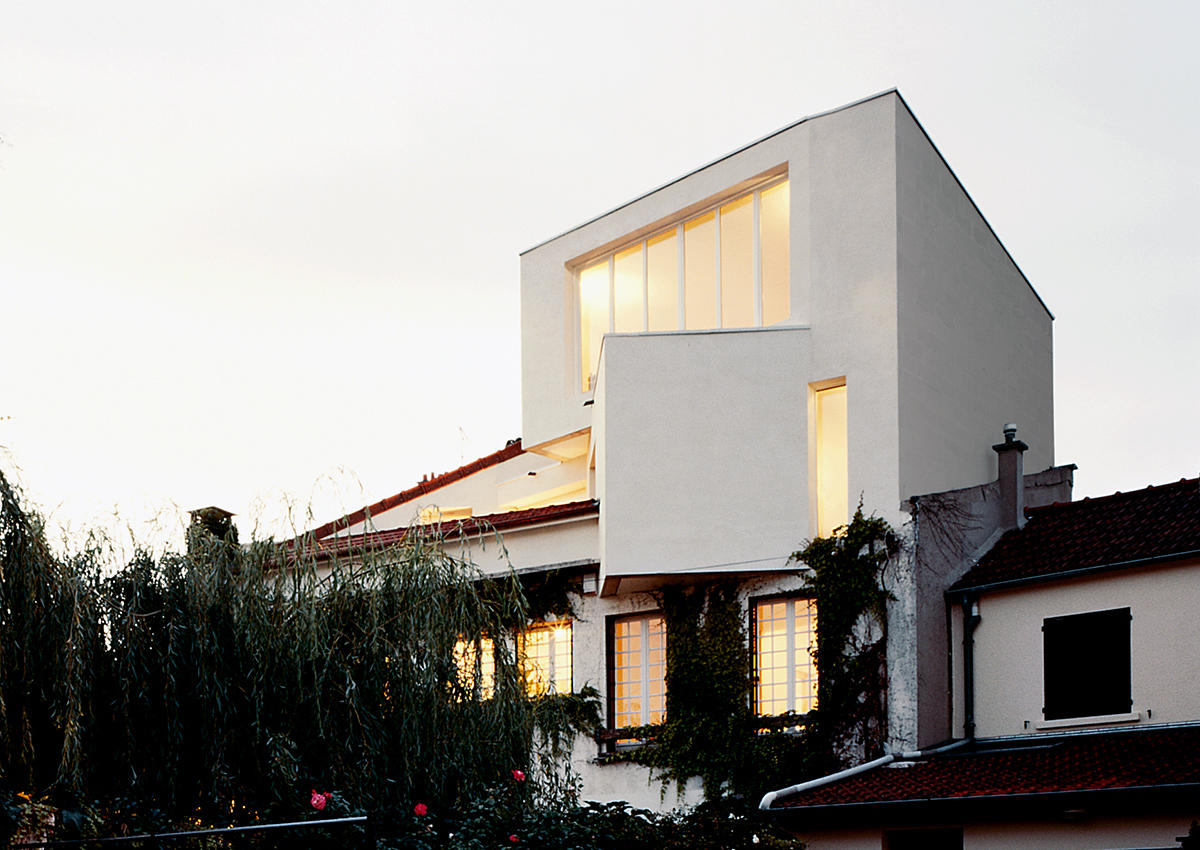 Five years later we delivered a project for 49 housing units in Vitry-sur-Seine (near Paris) through the In Situ Architecture firm founded by my brother. Once again largely influenced by phyllotaxis, the units are staggered in height as part of a tiered system arranged in a spiral. Capturing sunlight offers the dual advantage of using the Sun's passive energy, and creating an environment that is favourable to the biorhythms of inhabitants.

We then worked on formalising our approach. In 2017, we began developing an algorithm that can model the energy saving generated by the arrangement of housing units according to a phyllotaxis-inspired layout. The algorithm can calculate the positioning of each unit within a more or less dense habitat, like the leaves in a spiral along the length of a stem, while maximising the amount of natural light captured. By way of example, for a building project in Senlis (near Paris) that is still under development, savings in heating are as high as 20%.

Our algorithm, which stems from a collaboration between the RDP laboratory3 and In Situ Architecture, could be of interest to both city and regional authorities, with a commercial version currently under development.

For an office building project in Paris's 15th arrondissement, we developed a "double skin" that is sensitive to temperature. It consists of cells covered in a material whose creases are inspired by the hornbeam leaf. We chose this leaf because the relationship between its folded and unfolded surface is optimal: its folding pattern follows simple and efficient geometric rules, with pronounced ribbing aligned in a V-shape, and an axis that corresponds to the edges of the ribs. At the office building in question, a material is stretched across ribs, which are attached to a lateral axis and extend at certain temperatures in order to avoid overheating and optimise energy use. 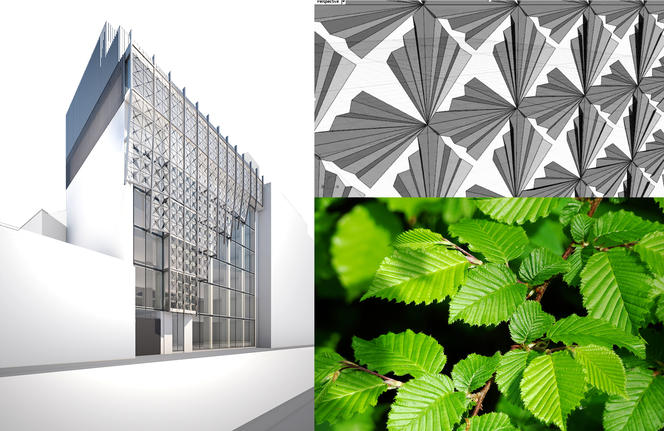 In order to optimise the energy consumption of this building in Paris's 15th arrondissement, its facade was equipped with a "double skin" made of a material that is sensitive to temperature. Its folds, which have highly prominent ribs and are aligned in a V-shape, were inspired by the hornbeam leaf. 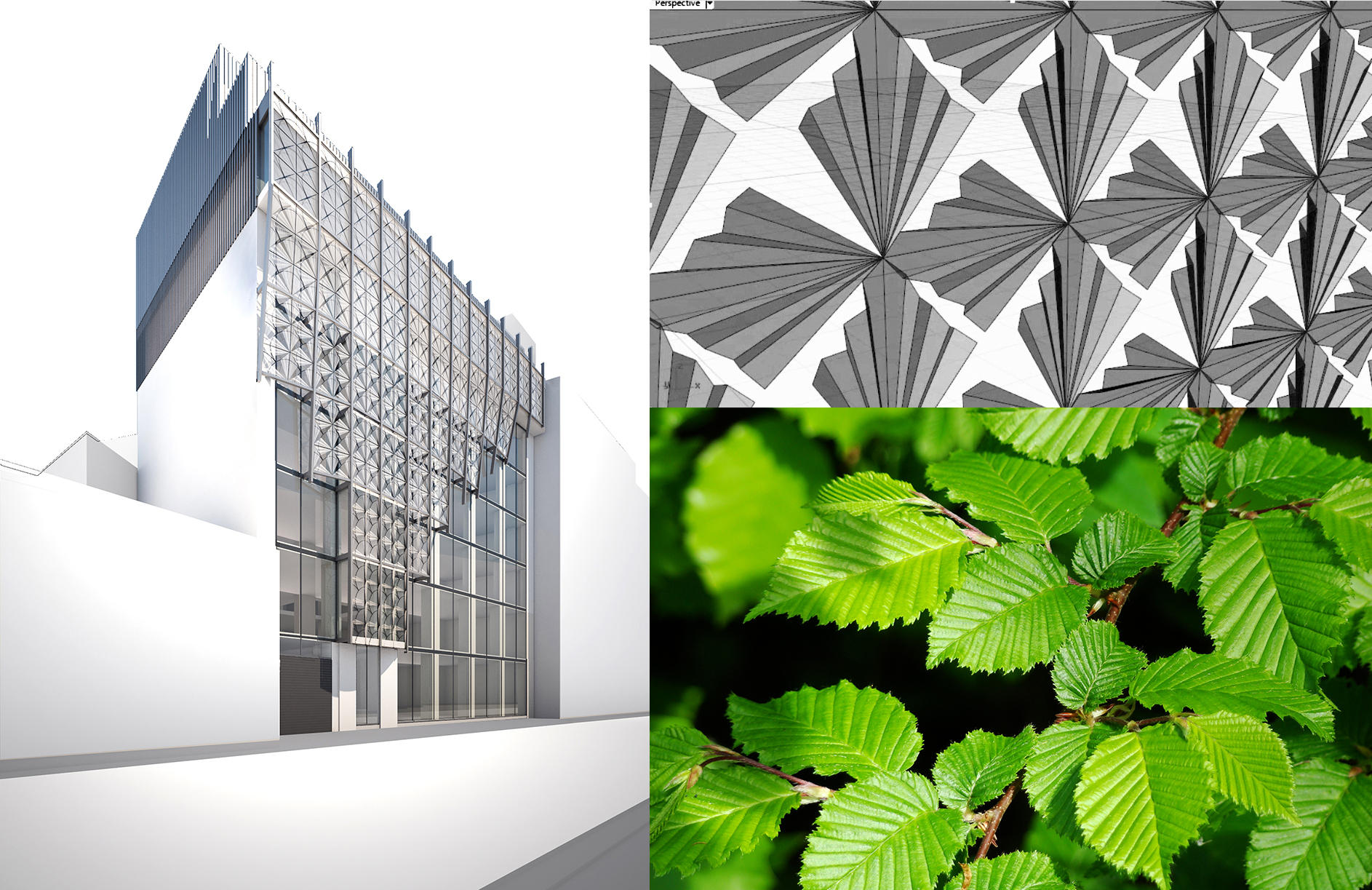 In order to optimise the energy consumption of this building in Paris's 15th arrondissement, its facade was equipped with a "double skin" made of a material that is sensitive to temperature. Its folds, which have highly prominent ribs and are aligned in a V-shape, were inspired by the hornbeam leaf.
IN SITU architecture; arenysam/Stock.Adobe.com
IN SITU architecture; arenysam/Stock.Adobe.com
Share
Share

Last spring, In Situ Architecture also delivered a church in Senegal whose ventilation reproduces that of termite mounds, in which the air enters from the bottom and comes out from the top. The structure's verticality creates a "chimney effect" that promotes air circulation and maintains an approximate temperature of 25 °C inside, even when it is 50 °C outside. The project earned In Situ Architecture the international MasterPrize in 2019.

It is worth noting that in 1996, the Zimbabwean architect Mick Pearce built the seven-storey Eastgate Centre in Harare (Zimbabwe), which is inspired by the same principle of ventilation. Both his building and the church we designed are highly energy-efficient, but also offer comfortable room temperature with no need for fans or air conditioning. 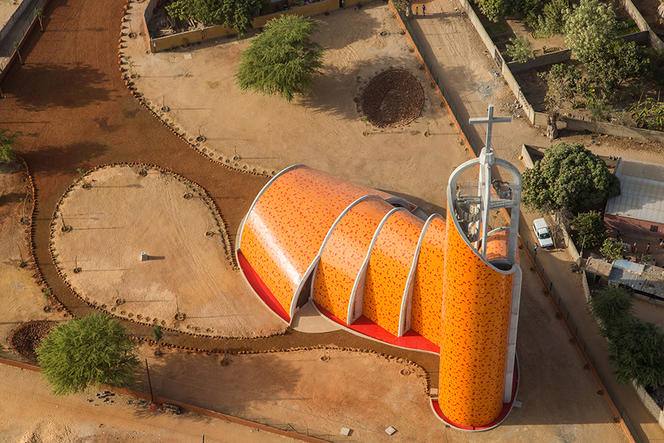 This church in Nianing, Senegal is another example of biomimetic architecture: its vertical ventilation reproduces the "chimney" effect of termite mounds, and provides the structure with a comfortable room temperature without air conditioning. 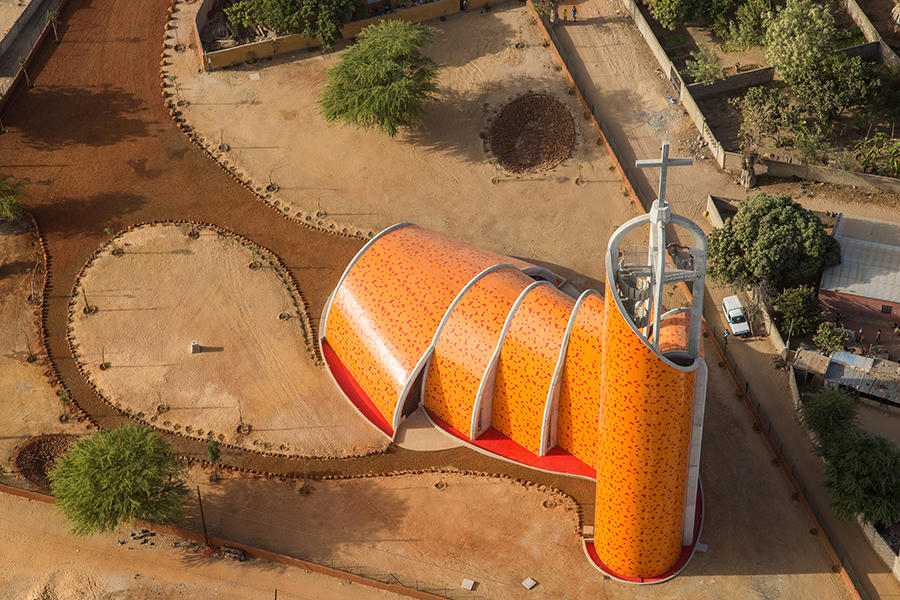 Using less material is another important aspect of sustainable development. With this in mind, we have also worked on wooden structures with polygonal shapes (primarily pentagons and hexagons). The choice was an obvious one, as this form appears in honeycomb structures, the calcareous skeleton of corals or sea urchins, and the cell pattern of chlorophyll-producing plants, among others. When the same structure is present in a large number of living species, including both plants and animals, it has to be a high-performance solution!

The solutions present in living things naturally respond to a highly specific ecosystem, and are not always suitable for the constraints of the building industry. Also, the concept of biomimicry is sometimes hyped up, with a logic that is solely based on analogy. Each source of inspiration must therefore be precisely tested before it can be considered as a solution.

Fortunately, technology now offers invaluable tools that are a far cry from the paltry means available to Leonardo da Vinci when he tried to produce machines that flap wings — a design that was inspired by birds. Computer modelling enables us to assess the relevance of our systems very quickly, with no need to build and subsequently evaluate the associated energy saving. The interdisciplinary expertise in our duo is essential for designing biomimetic models that also take into consideration the constraints of architecture and urban planning.

A vision of nature in which humans are part of a chain with all other living beings — and not one where they sit at the top — is the only virtuous and sustainable approach for humanity. It is in this perspective that we are working towards biomimetic architecture. 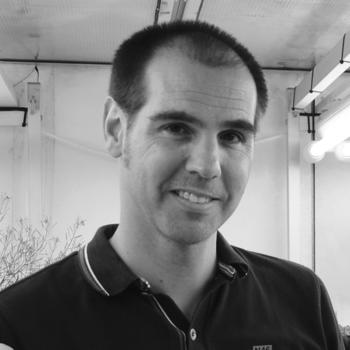