Chemistry without Solvents is Possible

Chemistry without Solvents is Possible

Frédéric Lamaty
Chemists have revamped the traditional mortar and pestle technology by developing mechanochemical processes that make it possible to avoid solvents and their toxicity. Another step towards green chemistry.

Through its synthesis activities, organic chemistry contributes to the production of many everyday products including plastic materials, medicine, and cosmetics. Yet in a context of sustainable development, it must reduce its environmental impact while remaining economically viable. A crucial issue consumers are unaware of is that producing these compounds requires a large amount of solvents, which are often toxic, volatile, and harmful to the environment. While these substances can be recovered and recycled in an attempt to limit these effects, a radically different, promising, and innovative approach also exists: creating entirely new processes that avoid solvents altogether by using grinding instead. 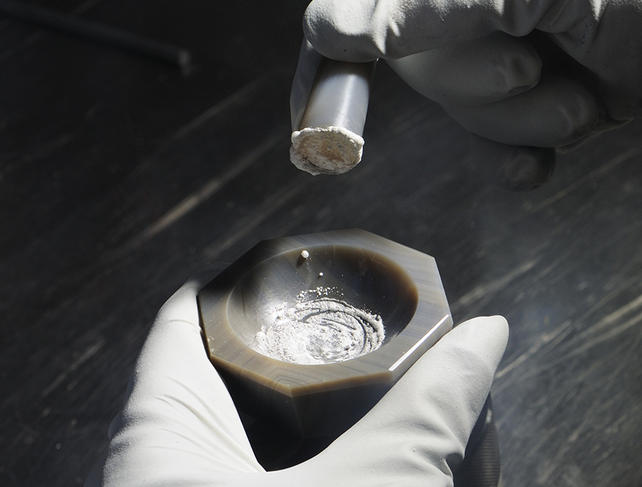 Mortar and pestle are very simple and effective tools used to obtain chemical compounds that avoid the harmful effects of solvents. 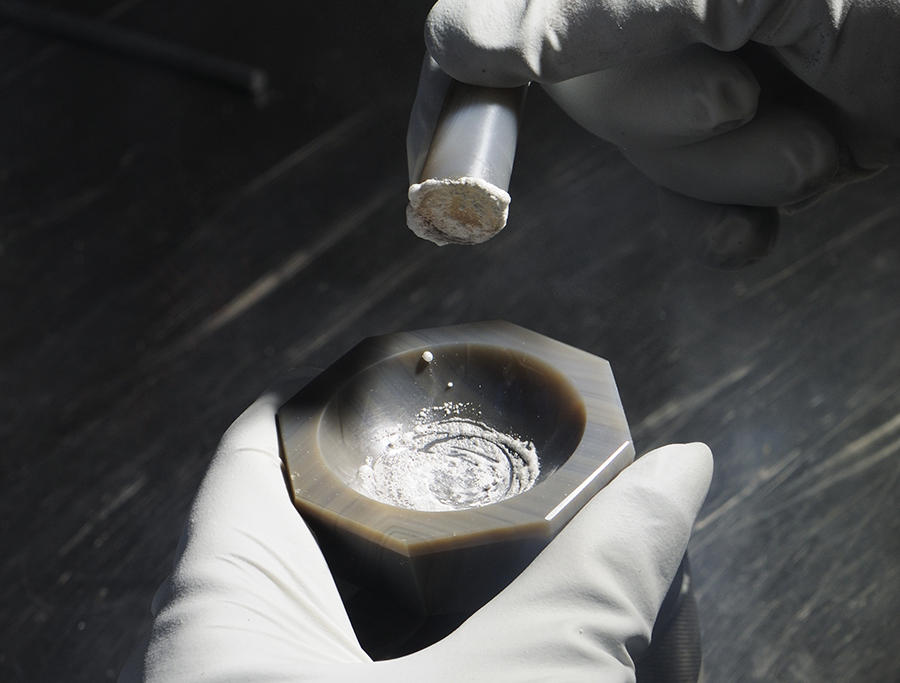 In order to survive, sustain themselves, and develop their activities, humans have developed grinding techniques since time immemorial to reduce seeds into flour that is easier to manipulate and cook, for instance, or to prepare the pigments used in cave paintings. To do so, they often used simple tools such as the millstone or the mortar and pestle which, when operated by a single person, can generate enough mechanical force to press juice from fruit, or transform mixtures of sand, clay, and other materials into mortar. Since this mechanical action also facilitates or generates chemical reactions, the term mechanochemistry is used to describe it.

With the advent of a high-performance chemical industry, the technique of mechanochemistry was initially developed, and accepted as such, for the preparation of inorganic compounds such as cement, or the metal oxides used in new batteries. More time would be needed for chemists and the world of organic synthesis to seriously consider using mechanical techniques to synthesize medicine, materials, or dyes without resorting to solvents. 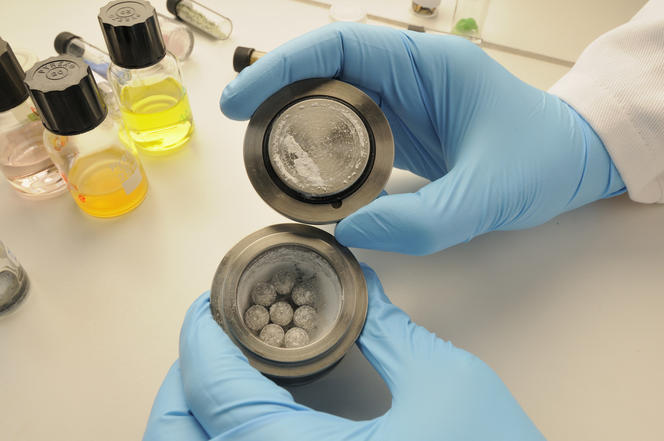 This borane powder, a material used to store hydrogen, was obtained by mechanosynthesis. Visible in the mill, the steel balls used in the process. 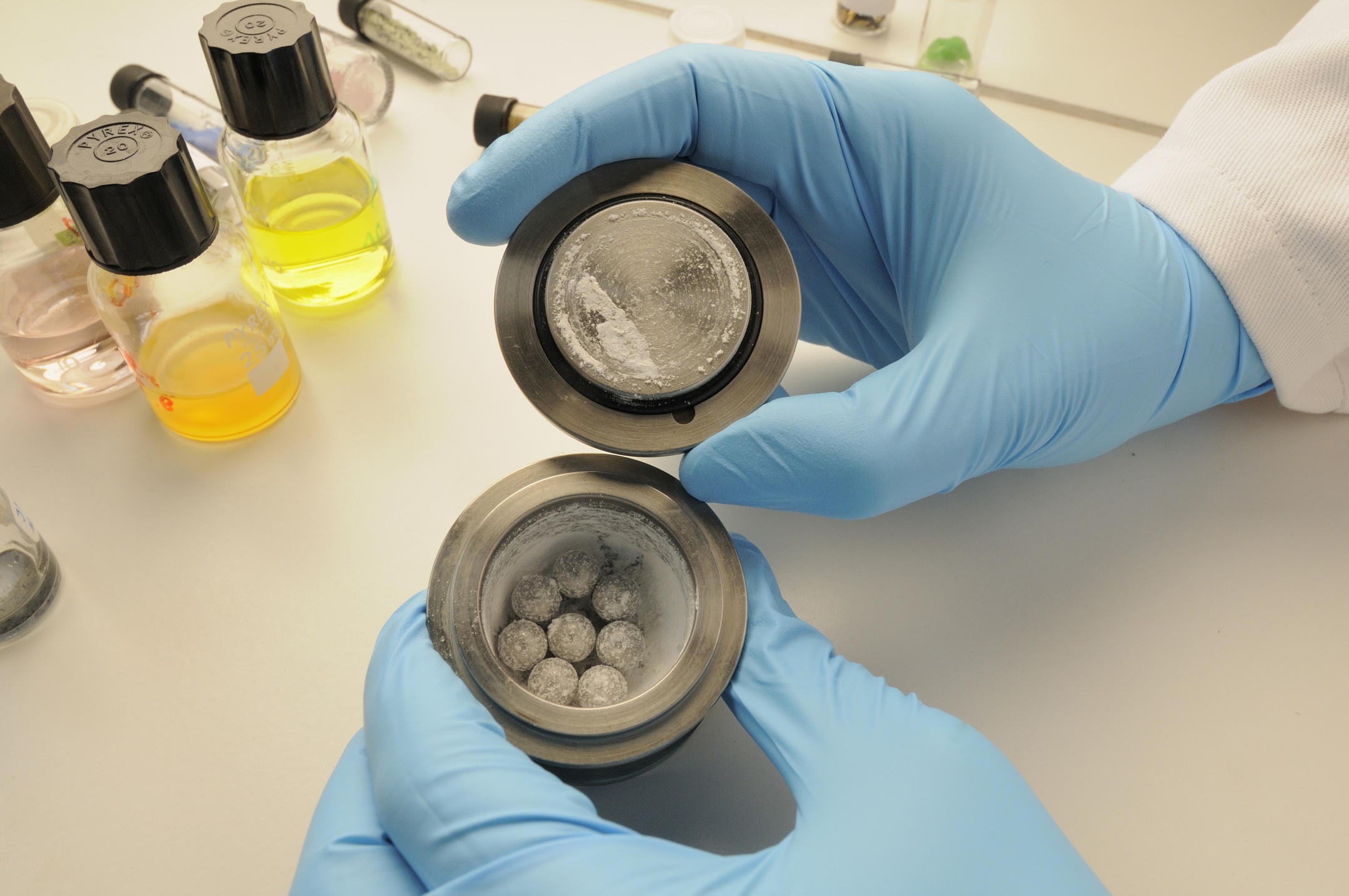 Traditionally, organic chemists needed solvents to dissolve and facilitate contact between different reactants, and sometimes to trigger reactions through positive "solvent effects." "No synthesis without solvents" became a dogma among scientists from Antiquity, when a mistranslation from Greek to Latin drew sweeping conclusions from a sentence by Aristotle, which postulated that liquids mix better than solids. As a result, organic chemistry without solvents experienced only marginal development. However, isolated research using a tool as rudimentary as a mortar and pestle has already demonstrated the possibility of generating organic chemical reactions through mechanochemistry. In an attempt to "mix" solids even better, to use Aristotle’s term, chemists have now turned to ball mills, which provide more effective grinding, along with greater reproducibility, lengthier grinding time, and higher product yield.

This approach has contributed to the development of a green and sustainable chemistry by making it possible to do away with or considerably reduce often harmful organic solvents. The use of these substances is also known to cause a dilution of the molecules in a reaction. However, the speed of a reaction is linked to this dilution: the greater the dilution, the slower the reaction, since the reactants are less likely to encounter one another and react. Grinding avoids this dilution in a solvent, and places reactants in constant contact until their reaction is complete.

In France, a team at the IBMM1 in Montpellier has been focusing on mechanochemistry for 15 years. Among other achievements, it has obtained unprecedented results in the key field of peptide synthesis. Because they have a high therapeutic index and low ecotoxicity, peptide molecules have garnered considerable interest from researchers and pharmaceutical companies alike. An increasing number of these pharmaceutical compounds are undergoing clinical trials or are already on the market. The "conventional" techniques used for synthesizing them are tried and tested, and some are even automated, yet these methods require large amounts of solvents and toxic reactants. By grinding two amino acid derivatives, the mechanochemical approach has succeeded in generating peptide bonds and creating longer peptides step by step, while drastically reducing the quantities of solvents usually needed to obtain a pure product. More detailed studies will soon make it possible to produce peptide drugs with this new procedure.

The same team has also used its expertise in mechanochemistry to optimize the preparation of organometallic compounds, which have both an organic and metal structure, and can provide therapeutic effects or serve as catalysts in the production of materials or polymers. Here again, reductions in the amount of solvent used, along with the effectiveness of a quick and clean synthesis of useful molecules, make it a method of choice for the preparation of new compounds. 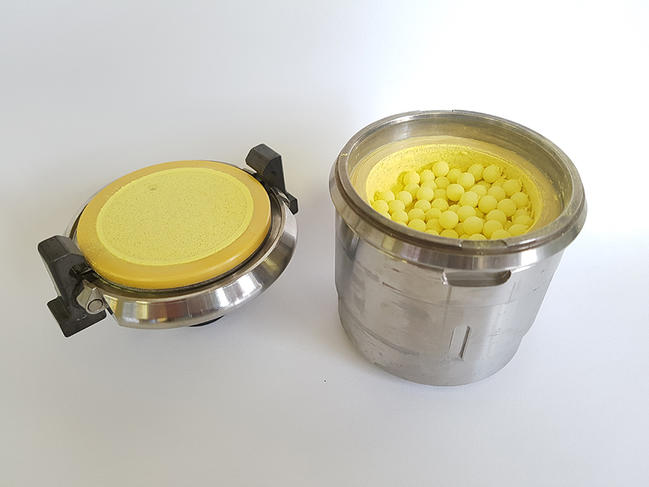 This organometallic complex has just been synthesized and is still in its grinding bowl. 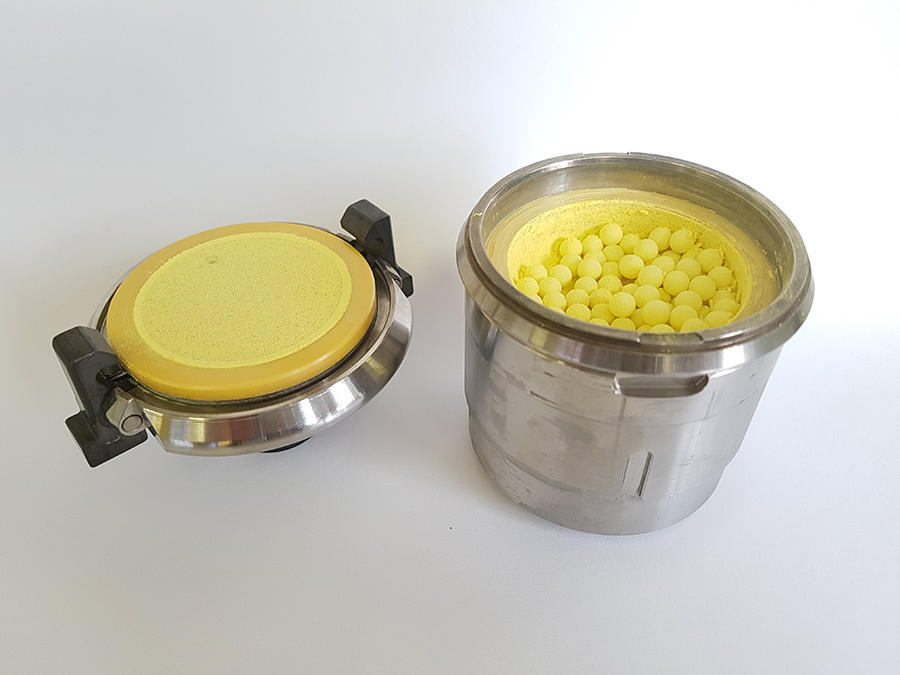 The development of mechanosynthesis to produce compounds with varied structures demonstrates the broad scope of this method, and bodes well for a wide range of applications in the near future. The need to engage in a sustainable development approach in organic synthesis has led to the emergence of a breakthrough technology with novel scientific outcomes. All it takes now is to convince a larger number of organic chemists of the method's scientific, technical, and ecological benefits. 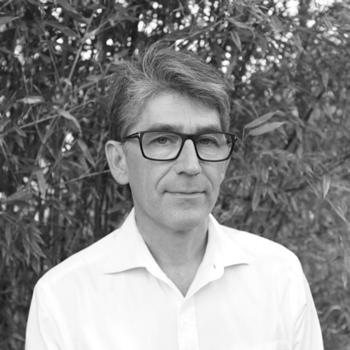 Frédéric Lamaty is a research director at the Max-Mousseron Institute of Biomolecules,...