Alexandra Gros
In cetaceans—unlike in other mammals—breathing is a voluntary action that involves returning regularly to the surface. Sperm whales take naps in vertical position, and when dolphins sleep, half of their brain stays awake. How exactly are they able to do this?

Sleep is a vital physiological function involved in memory, awareness, and forgetfulness, to mention only its cognitive roles. It consists of three phases: light slow-wave, deep slow-wave, paradoxical or REM (rapid eye movement) sleep. However, certain marine mammals, including cetaceans (whales and dolphins) are exceptions when it comes to sleeping patterns. 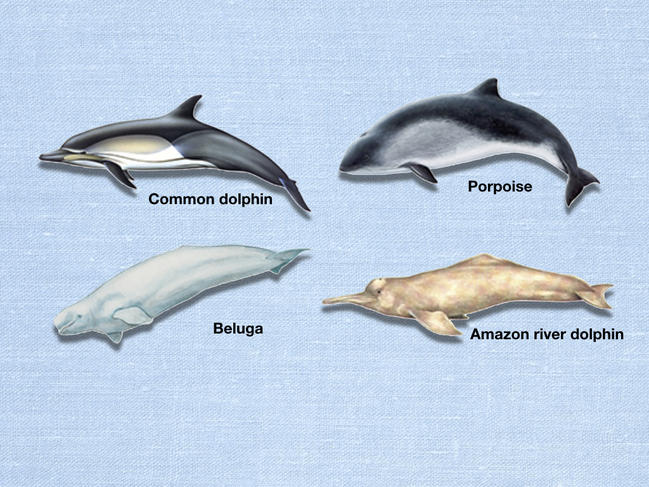 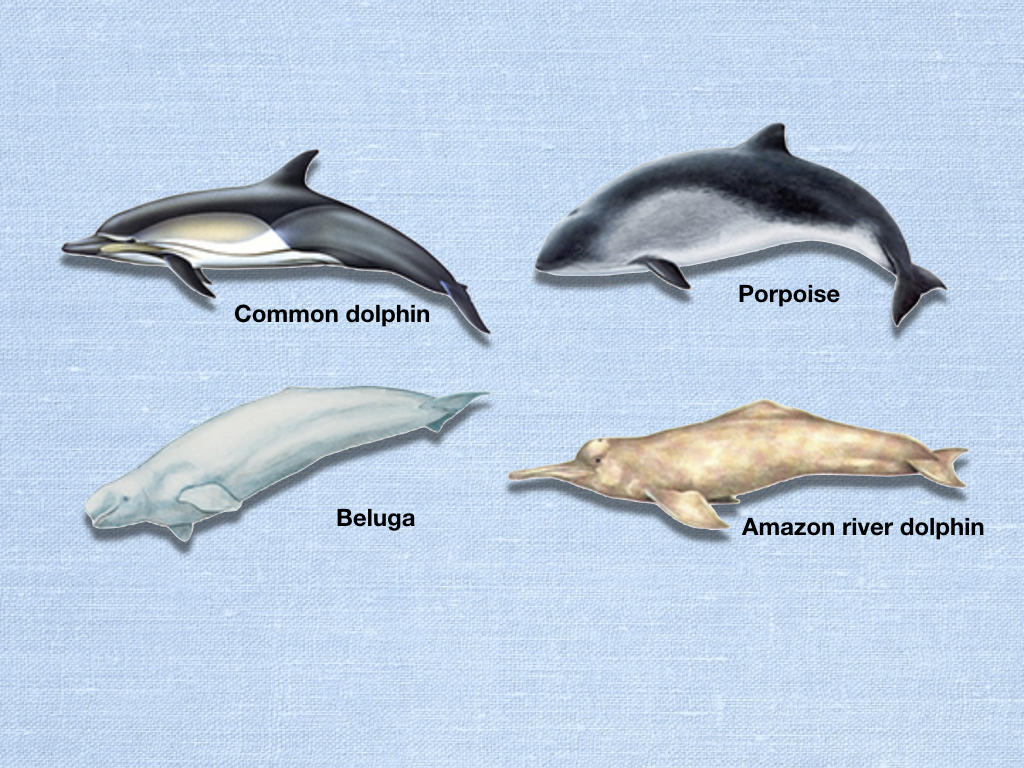 Sleep can be studied from a behavioral perspective through the observation of external signs (posture, immobility, eyes, etc.), and also by recording physiological or cerebral parameters (electroencephalography, electrooculography, magnetoencephalography, breathing frequency, temperature). The recording of all these parameters makes it possible to distinguish sleep, wakefulness, and the various phases of sleep.

This biological phenomenon has been studied in certain cetaceans, including the common dolphin, porpoise, Amazon river dolphin, pilot whale and beluga whale.1 John Lilly was the first to experimentally study dolphins, starting in 1964. He observed that these mammals sleep with one eye open. This research was later extended to five species of cetaceans. Mainly conducted on animals in captivity, it showed that sleep is most often unihemispheric, which means that it produces slow waves in one cerebral hemisphere, while the other shows rapid waves typical of wakefulness (figure 1). Sleep periods thus alternate between the two hemispheres, but each one gets the same amount of sleep overall. 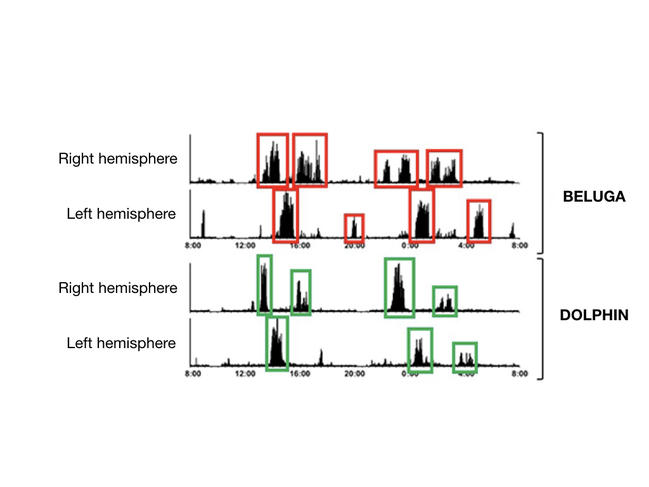 Examples of electroencephalograms showing the frequency of slow waves in a porpoise and a dolphin specific to unihemispheric sleep: the sleep periods (in red and green) alternate between the left and right hemispheres of the brain. Adapted from Lyamin et al., 2008. 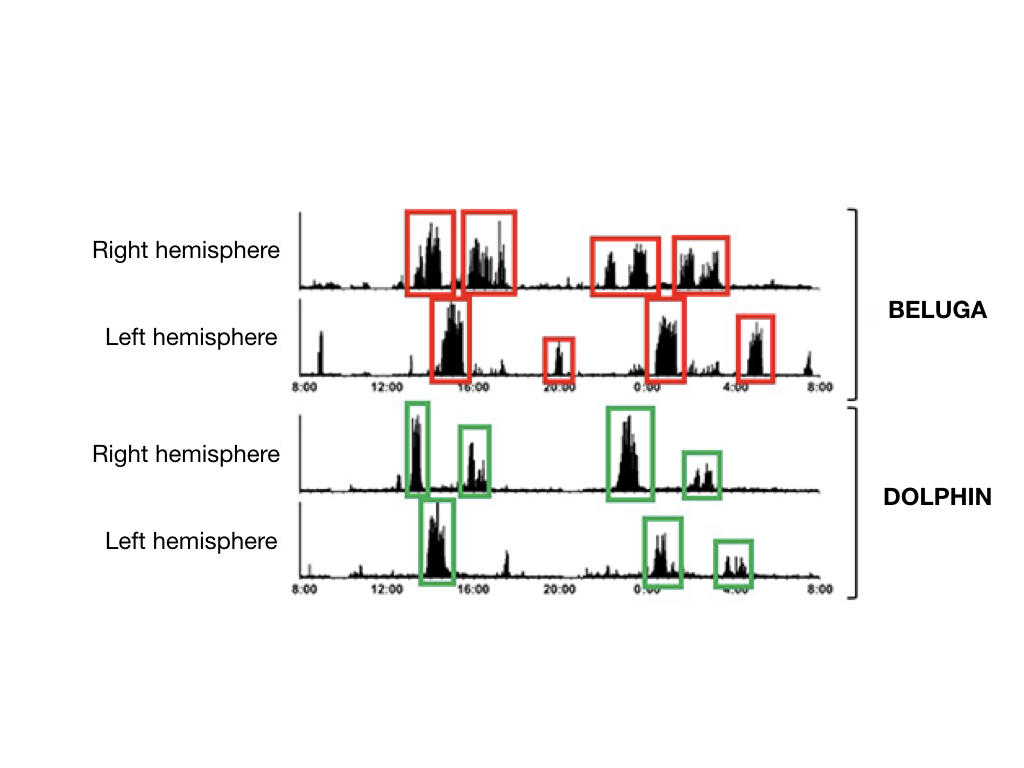 How do cetaceans sleep?

Studies on cetaceans in captivity show that they sleep for periods of less than one hour, about ten times a day (five periods per hemisphere). Slow-wave phases account for 70 to 90% of total sleep. The duration of sleep and of each different period varies between individuals and species, but also as a function of the environment. In captivity, rest or sleep phases occur mainly at night and sometimes in the afternoon. Under these conditions, their distribution over the day is probably affected by feeding times and human activity. In the natural environment, sleep and wakefulness periods seem to be related to the availability of food in the daytime, diurnal and seasonal migrations, weather conditions and social behaviors. Circadian rhythms in cetaceans are thus influenced by many external factors.

It is common to see sleeping cetaceans with one eye open and the other shut. Even if this behavior is not strictly linked with sleep, there is a clear relationship between the two when sleep phases are long. During resting periods, small cetaceans are often seen swimming slowly and continuously. This is the case in several species of porpoise and dolphin. In aquariums, this slow swimming always takes place in the same direction (clockwise or anti-clockwise), and does not depend on which hemisphere is inactive. In the wild, however, it seems that cetaceans swim slowly in one direction, either close to the surface, or sometimes, more surprisingly, in deep water. Floating is also observed among large cetaceans during sleep phases. The animals remain still at the surface, with periodic breathing and slow tail movements. Killer whales or certain large cetaceans can stay this way for around an hour or more, with a low breathing rate. Researchers also observed motionless sperm whales close to the surface in the open sea, positioned either horizontally or vertically (figure 3). These different postures vary not only between species but also between sleep periods. In any case, cetaceans do not remain motionless for very long and it is not unusual to observe synchronized behavior in a group of animals. 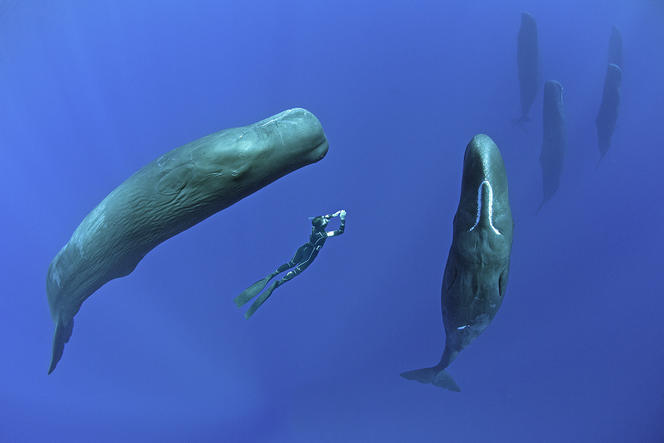 Sperm whales asleep in the vertical position. A study by Miller et al. in 2008 showed that sperm whales mainly sleep in this position during the day, with both eyes closed. This position is rare however and appears to be mostly for short naps (7% of sleep time). 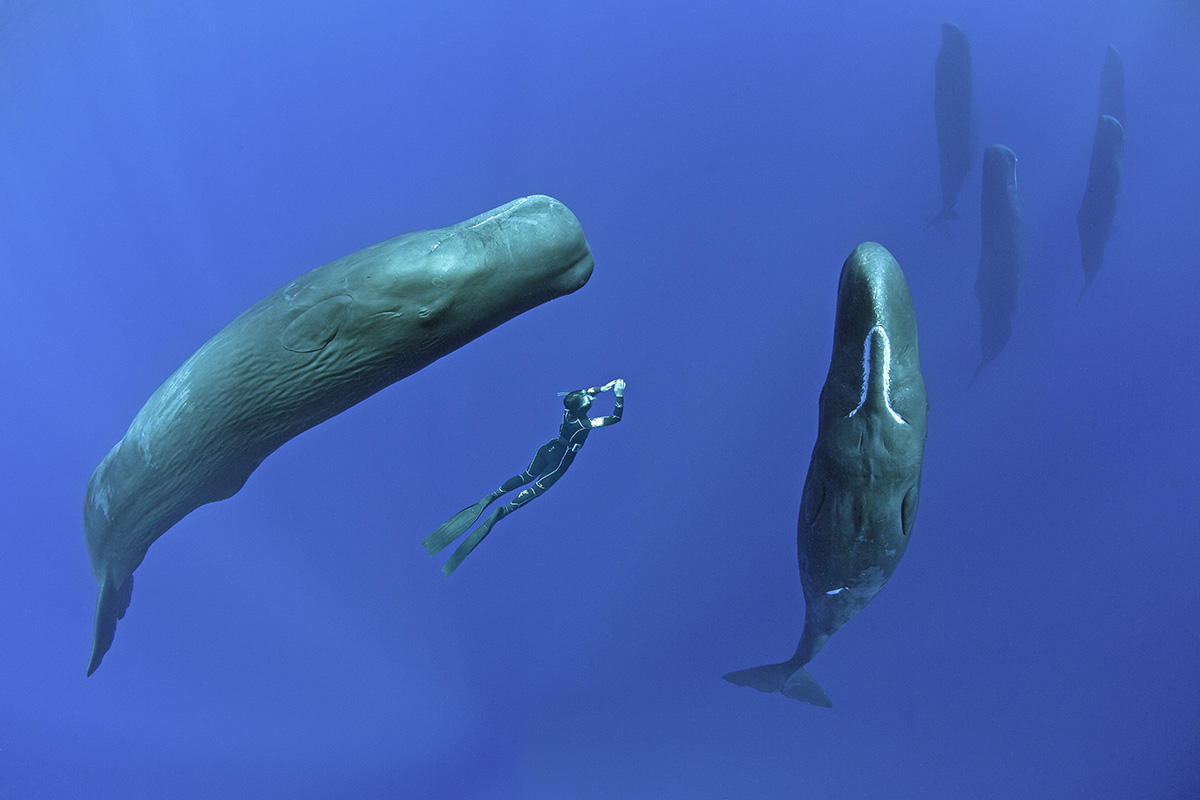 The advantages of keeping an eye open

Cetaceans evolve in an aquatic environment, at relatively low temperatures for mammals. Unihemispheric sleep could be an adaptation mechanism to the environment in which they live. In cetaceans—unlike in other mammals—breathing is a voluntary action that involves returning regularly to the surface. Continuing to swim while asleep would therefore allow the animals to go back to the surface and maintain the necessary posture for breathing. Swimming while asleep is also necessary to counter currents, waves and tides. Certain river specimens, for example, never stop swimming their entire lives. Floating behavior mainly occurs when the sea is calm; when it is rougher, even only slightly, cetaceans swim slowly or make sluggish tail movements to keep their balance. Swimming also generates heat, which enables them to maintain their body temperature. As mammals, they make their own body heat via thermoregulation mechanisms in difficult thermal environments, since heat loss is accentuated by water. Unihemispheric sleep could make it possible to keep these mechanisms active in both body and brain during resting periods, thereby avoiding hypothermia.

In the wild, the presence of predators requires constant vigilance, which could also explain why cetaceans keep one eye open as they sleep: to remain alert, constantly monitor their environment, and stay in contact with fellow animals of the same species in their group. In addition, other data shows that even during sleep, these mammals continue to take in a certain amount of information and maintain a high level of vigilance during their rest phases.

On the basis of available data, it is not possible to draw conclusions about whether or not cetaceans have paradoxical sleep. In fact, encephalographic studies failed to provide evidence of the cerebral waves characteristic of this type of sleep, along with REM and involuntary muscular movements, which have only occasionally been observed in a few cetacean species. Although isolated involuntary muscular movements have been recorded in certain rest phases, they are not considered a sufficient indicator of paradoxical sleep. Furthermore, they can occur not only during sleep but also when the animal is awake, which raises the question of whether this phenomenon really indicates paradoxical sleep without the characteristic cerebral waves.  It is possible that current studies have failed to demonstrate paradoxical sleep for technical reasons—such as recording duration and methods—or that paradoxical sleep takes a different form in cetaceans.

Unihemispheric sleep has also been established in juvenile and newborns of just a few weeks. The maintenance of visual contact between the calf and its mother is fundamental over the period when the young animal is at its most vulnerable in its environment, including during rest phases. In the weeks following birth, no floating behavior is observed in the mother or newborn calf. They instead maintain continuous swimming, with the calf breathing frequently, which is incompatible with long sleep periods. Certain studies show that calves sleep relatively little during the first stages of life, and neither do their mothers. This capacity to stay active and receptive after birth has several advantages, including the reduction of predation and the maintenance of body temperature until enough blubber has developed.

Unihemispheric sleep seems to offer a significant benefit in the environments where cetaceans evolve. This phenomenon is also found—albeit to a much lesser extent—in other marine mammals such as seals. Nevertheless, in cetaceans, sleep has been far less studied than communication systems, echolocation (the use of sound to locate objects in space) or other so-called “active” behaviors such as hunting or mother-calf relationships. In addition, due to the difficulty of observing sleep among cetaceans in their natural environment, most studies have been conducted on specimens in captivity in shallow tanks, which undoubtedly influences the data recorded. This work nonetheless enhances existing knowledge of these marine mammals whose behavior remains a mystery. 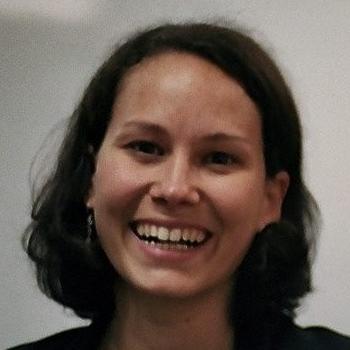 Alexandra Gros is a doctor of neurosciences (Institut des Neurosciences Paris-Saclay, University Paris-Sud). During her PhD, she investigated the role of adult hippocampal neurogenesis...

07.04.2017
Opinion
Studying Elephants’ Sleep Patterns to Understand our Own?