Astatine, an Ally against Cancer

Astatine, an Ally against Cancer

François Guérard
Astatine is one of the rarest chemical elements on Earth, and one of the most unstable. Nevertheless, it is of considerable interest to medical research as it could help destroy cancerous tumors that are difficult to treat.

Mendeleev suspected its existence as early as 1869. In his famous “Periodic Table of Elements,” he provided for a box to be completed below that of iodine, but it was only in 1940 that astatine (with the symbol At) was officially discovered, after numerous false starts. And for good reason: it is one of the most enigmatic chemical elements.

The mystery that still surrounds astatine mostly stems from its extreme scarcity in the natural state. Resulting from the disintegration of heavy elements such as uranium, it is highly unstable and in turn breaks down within a few hours. At a time T, it is estimated that only a few grams of astatine are present in a transient fashion on the entire Earth's crust. This considerably limits the opportunities to study its characteristics, as only traces of the substance can be assembled, and in such infinitesimal quantities (at best, around a billionth of a gram) that they cannot be directly observed or subjected to the analytical instruments that are usually employed to characterize chemical elements.

A particular isotope of this radio-element is nevertheless of major interest to medical research: astatine-211.  When it disintegrates, it releases a radioactive particle endowed with sufficient energy to destroy any cells it passes through, which makes it a serious candidate for the elimination of cancerous tumors that are currently difficult to treat.

Astatine-211 emits particles that could make it possible to treat isolated cancer cells.

Using radioactive isotopes to eradicate tumors is nothing new: therapies relying on this approach already exist. However, available treatments involve the use of radioactive elements, which emit “beta” particles that penetrate a few millimeters into biological tissues. Although they can be helpful for the treatment of large-sized tumors (several millimeters in diameter), these particles have proved ineffective when targeting those smaller than a millimeter, as they also destroy the healthy tissue around the tumor.

On the other hand, astatine-211 emits “alpha” particles whose low penetration into matter (the thickness of a sheet of paper, or just 3 to 4 cells), could make it possible to treat isolated cancer cells (for example, in the case of leukemia) or small tumors such as disseminated micrometastases, and supplement conventional therapies (chemotherapy or surgery) after which undetectable tumor residues may persist and lead to a recurrence. 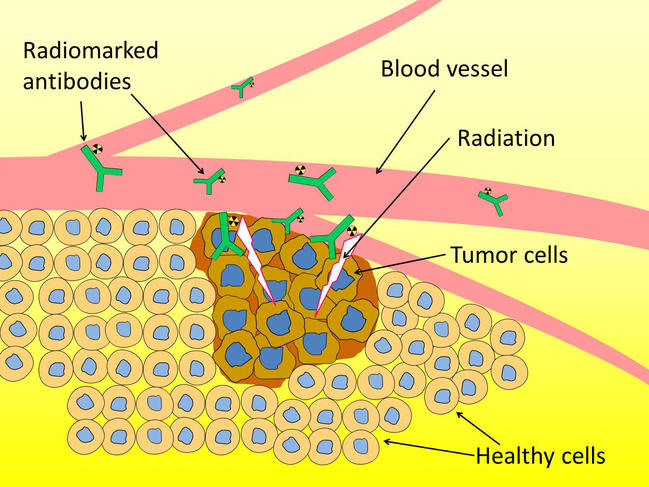 The astatine-211-antibody combination operates like a homing missile that deposits its radioactive load in a highly localized manner on the tumor, while at the same time limiting the irradiation of healthy tissues. 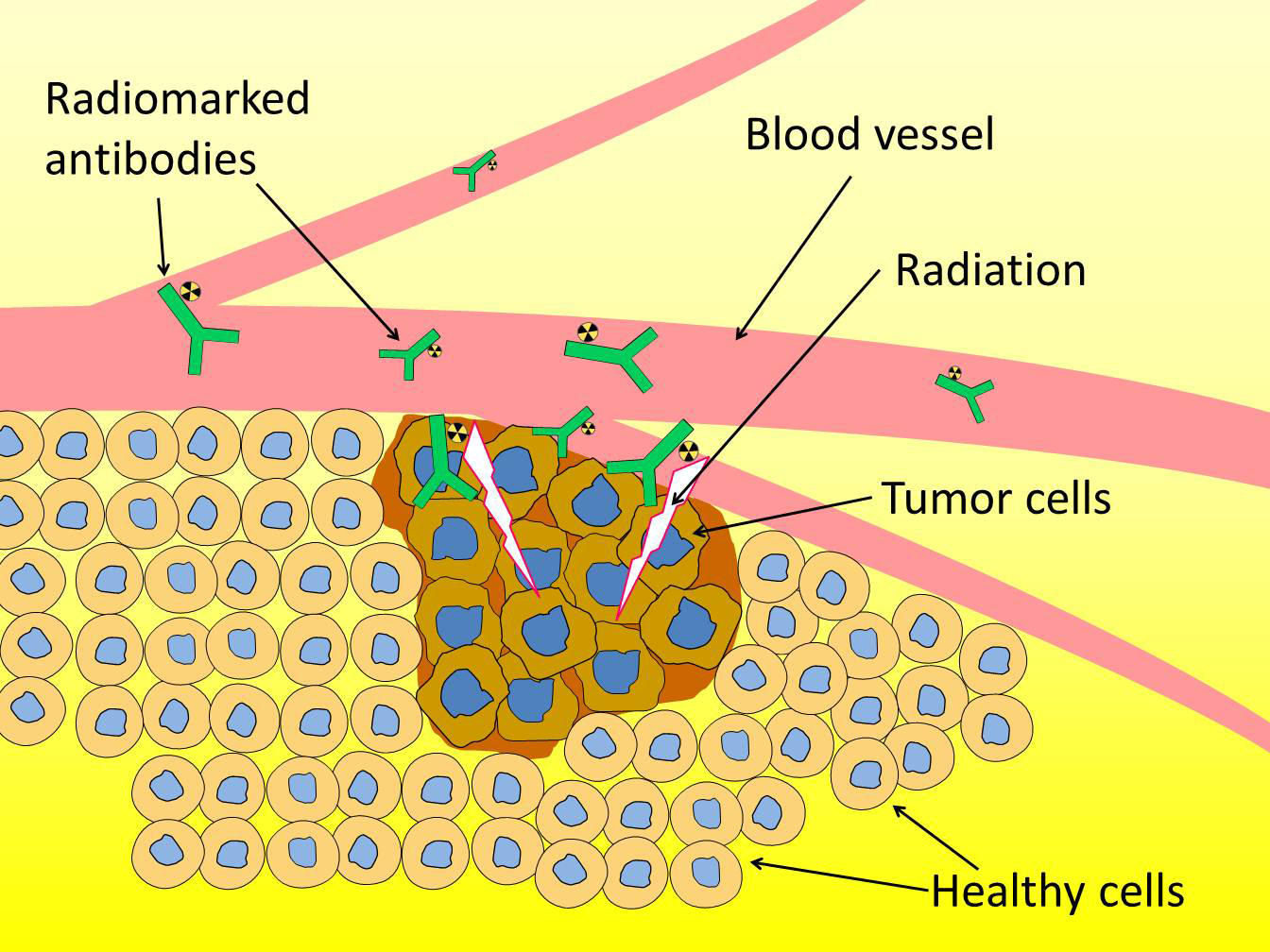 The astatine-211-antibody combination operates like a homing missile that deposits its radioactive load in a highly localized manner on the tumor, while at the same time limiting the irradiation of healthy tissues.
F. GUERARD
F. GUERARD
Share
Share

The use of iodonium salts, a promising lead

Although astatine-211 is too scarce in its natural state to be used for medical purposes, it can now be produced artificially by means of particle accelerators such as the Arronax cyclotron in Nantes (northwestern France), one of the most powerful devices in the world for the production of medical radionuclides. Yet to be able to use this element in medicine, it is still necessary to find a way of bringing it as close as possible to cancer cells. A novel chemical method developed by the French cancer research center CRCNA1 and the National Cancer Institute (National Institutes of Health, US) may finally provide a solution to this problem.

To transport astatine, the solution favored by researchers consists in “attaching it” to a molecule that can detect tumor cells. Today, antibodies are the vehicle privileged by scientists: arising from the immune system, they are capable of binding to the clearly identified antigens that cancer cells carry on their surface. The antibody-astatine-211 combination can thus be assimilated to a minuscule homing missile that is injected into the patient and designed to deposit its radioactive load in a highly localized manner on the tumor, while at the same time limiting the irradiation of healthy tissues.

It is in this shielded unit at the Arronax cyclotron in Nantes that radiopharmaceutical products such as astatine-211 are being synthesized.

But in order to ensure that the radioactive load (astatine-211) does not separate from the missile before reaching its target, these two elements need to be firmly bound together. This is now possible thanks to new compounds, iodonium salts: using them, the so-called radiolabeling operation becomes much more effective than the methods previously employed—and above all, much less toxic to the body.

Published this year in Chemistry-A European Journal,2 the results obtained in Nantes mean it is now possible to envisage the use of astatine-211 in the clinic. A clinical trial, sponsored by Nantes University Hospital, will be carried out in collaboration with the Institut de Cancérologie de l’Ouest in the context of a major research program led by the Arronax cyclotron and the CRCNA. 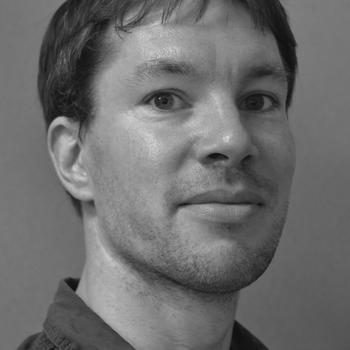 François Guérard works in the Nuclear Oncology team at the CRCNA...