Home / Articles / Why Bees are Disappearing

Why Bees are Disappearing

Home / Articles / Why Bees are Disappearing

Why Bees are Disappearing

Some beekeepers have experienced losses of up to 90%, a figure far in excess of the 5 to 10% mortality rate normally seen in bee colonies.
P. MARINI/REA
Share
Share
The last 20 years have witnessed a dramatic and unprecedented decline in bee populations. While intensive agriculture and the massive use of pesticides are believed to be the chief culprits, new practices among beekeepers also appear to be a contributing factor.

“The queen changeover worked—there’s larvae in the brood comb,” enthuses Lionel Garnery, holding up a frame covered with worker bees. The minute white dots at the bottom of the cells confirm that the hive’s new queen has indeed started laying eggs. We are at the Black Bee Conservatory1 in France’s Forest of Rambouillet. In this “small corner of paradise an hour from Paris,” teeming with birch trees, flowering heather and fern on which the bees feast in these final days of summer, a researcher who specializes in the genetics of bee populations at the EGCE laboratory2 has set up some 40 hives. The aim, like that of the 20 or so other conservatories throughout France, is clear: to ensure the survival of the black bee, the domesticated Western European honey bee. Indeed, Apis mellifera mellifera to give it its scientific name, is truly endangered.

A third of the world’s food crops depend on pollination. Without bees, there would be no tomatoes, zucchini...

“Over the last 20 years, honey production in France has been halved,” says Vincent Bretagnolle, ecologist at the CEBC,3 based in western France. This is part of a massive decline in honey bee populations throughout the entire developed world, from the United States to Europe to Australia. A worrying phenomenon known as “Colony Collapse Disorder” (CCD) was first documented in the US in the early 1990s. It struck France in 1995, with some beekeepers experiencing losses of up to 90%—far above the 5 to 10% mortality rates normally seen in bee colonies.

And the collapse of bee populations—both domestic and wildFermerIt is estimated that half of our fields, orchards and vegetable gardens are pollinated by wild bees, of which there are some 1000 different species in France (most of which are solitary and do not produce honey).—has far reaching consequences. By pollinating flowering plants, foraging bees ensure the reproduction of many plant species. No less than one third of the world’s food crops depend on such pollination, without which there would be no tomatoes, zucchini, strawberries or apples, for instance. The total value of the environmental service provided by bees? 153 billion euros worldwide, estimates France’s Institute for Agronomic Research (Inra).4 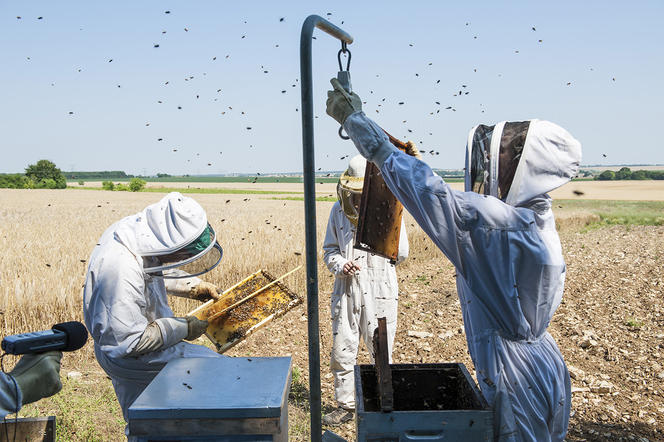 Bee hives monitored by the biological research center in Chizé (CEBC). Intensive agriculture (use of pesticides, elimination of hawthorn hedges and meadow flowers...) have deleterious effects on bee populations. 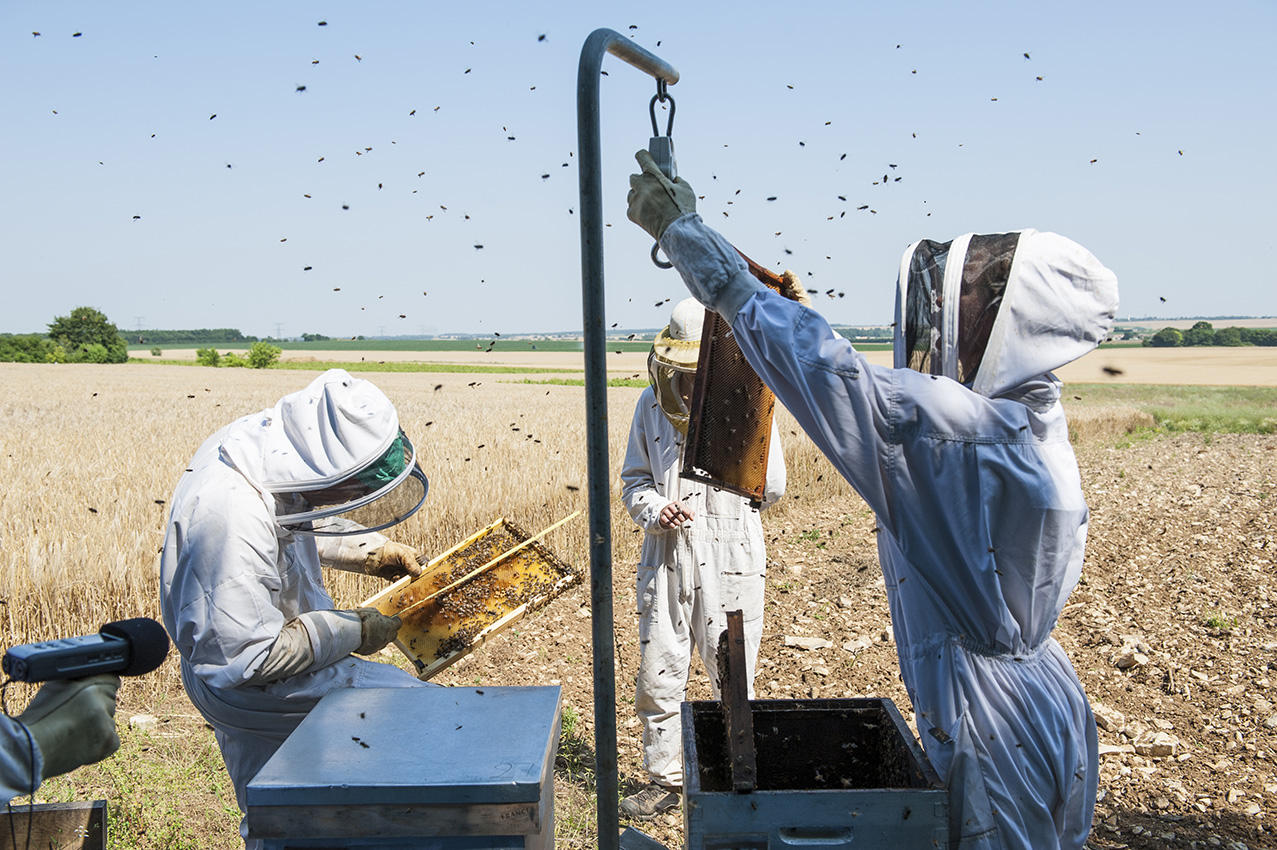 In the 1990s, beekeepers began suspecting a new class of crop insecticides, the neonicotinoids. These substances, developed in the 1980s, are potent neurotoxic agents that act directly on the central nervous system of crop pests. “Unlike previous generations of pesticides, neonicotinoids are spread not only on the actual plants, but may directly be coated on seeds,” explains Axel Decourtye, ecotoxicologist and director of France’s Apiculture Institute.5 “They are systemic insecticides that find their way into every plant tissue, including the pollen and nectar of flowers.”

Within the framework of the biodiversity law, the French Parliament voted a complete ban on neonicotinoids in France as of 2018.

The effects on bees were very quickly demonstrated by researchers: at high doses, neonicotinoids kill bees while at lower doses, they impair the cognitive capacities of foraging bees, rendering them unable to find their way back to the hive. In 2013, a European moratorium suspended the use of neonicotinoids on four of the crops pollinated by bees: rapeseed, sunflower, maize and cotton. Other cereals, such as wheat in particular, are pollinated solely by the wind. Yet these targeted bans—currently only enforced in Europe—may not be enough to stem the decline in bee populations. “In 2012, a study conducted in the fields within our observation zone in Chizé6 found that rapeseed nectar contained traces of imidacloprid, a neonicotinoid normally used on wheat,” says Bretagnolle. “It had in fact come from cereals grown there in previous years!”

And there is a simple explanation: “these potent insecticides have a strong affinity for water and are characterized by their long-term persistence in the environment,” explains Decourtye. Alerted of the situation by the researchers’ studies, and following lively debate, in July 2016, within the framework of the biodiversity law, the French Parliament voted a complete ban on neonicotinoids in France as of 2018. 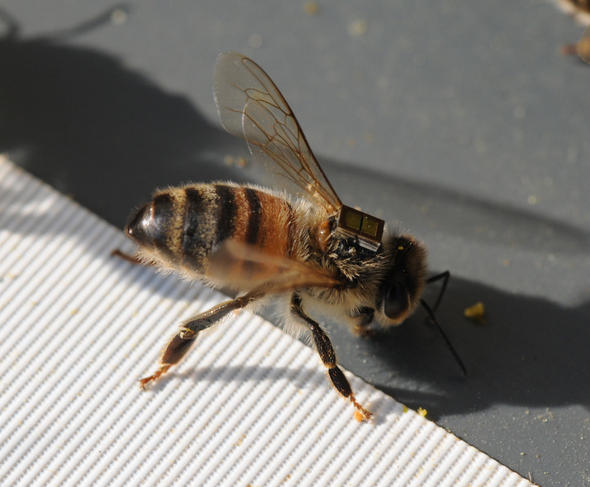 At low doses, neonicotinoids cause disorientation among bees, preventing them from finding their way back to the hive. Using this RFID transponder, it is possible to record details of their behavior and of their survival rates following exposure to pesticides. 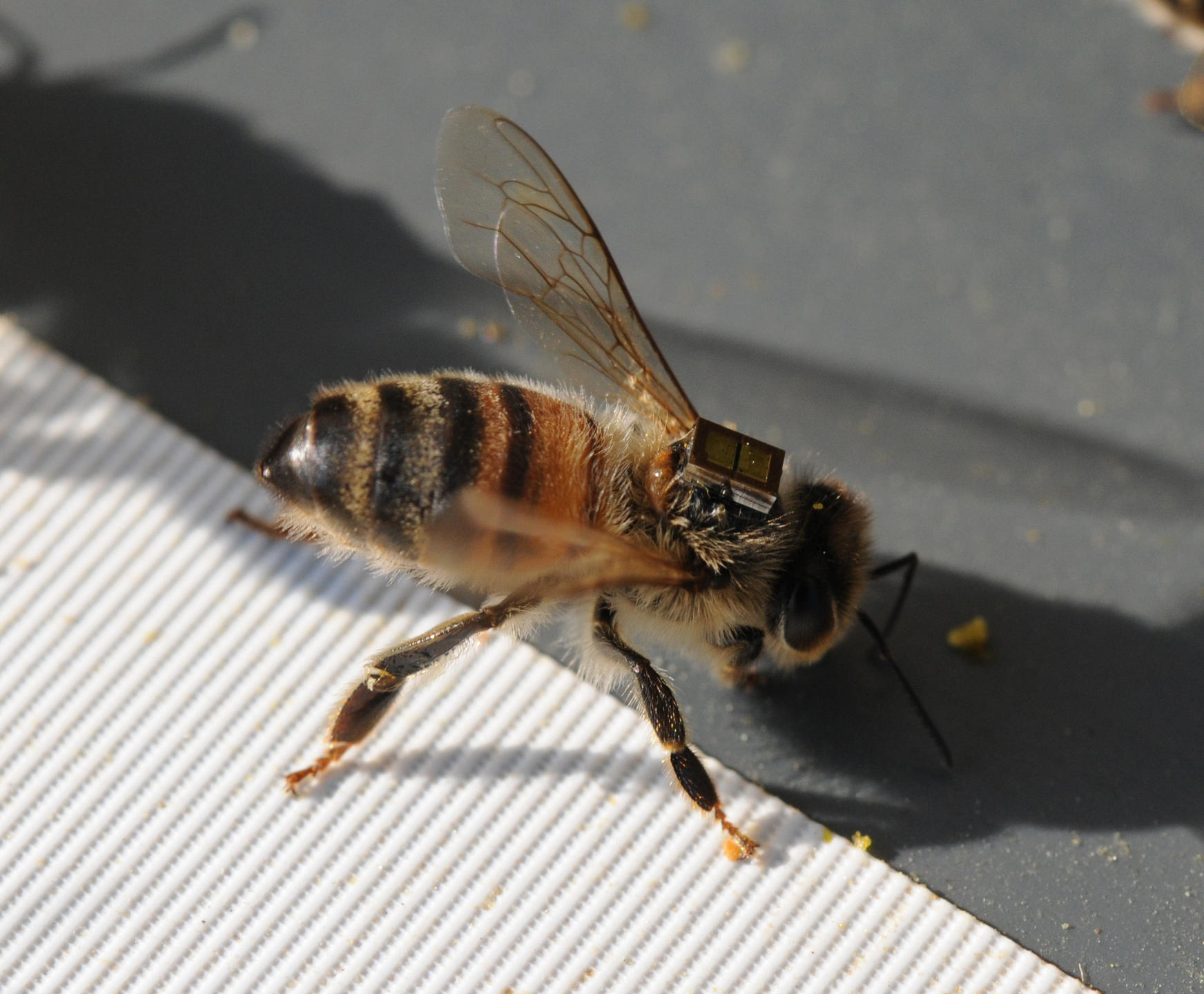 At low doses, neonicotinoids cause disorientation among bees, preventing them from finding their way back to the hive. Using this RFID transponder, it is possible to record details of their behavior and of their survival rates following exposure to pesticides.
ACTA
ACTA
Share
Share

While this move constitutes a victory for beekeepers and numerous researchers, the latter remain cautious about the results of this new legislation. “Politicians must not imagine that they have solved the bee problem at a single stroke,” warns David Biron, parasitologist at the LMGE.7  “The causes of the decline go far beyond the use of neonicotinoids on crops. Ongoing research lends increasing weight to the hypothesis of multiple stress resulting from a combination of a number of factors.”

“Intensive agriculture, agricultural landscape simplification, and the arrival of particularly virulent pathogens, as well as new practices among beekeepers, all weaken bees and contribute to the damage observed in bee colonies,” says Bretagnolle. The researcher has been monitoring several dozen hives with Inra in the Chizé zone, and has been attempting for several years now to convince farmers to stop the systematic eradication of weeds. Not only is this done primarily through the massive use of herbicides, but meadow flowers grow among them (poppies and bluebells, for instance) that are especially attractive to bees. Between the flowering of rapeseed in the springtime and that of sunflower in late July, there is nothing for the bees to harvest and their food sources remain severely reduced for several weeks. This depletion of nutrients is exacerbated by the disappearance of hawthorn hedges and of meadows in which lucerne and sainfoin flower.

“In order to keep their bees alive, an increasing number of beekeepers are feeding them with bags of sugar syrup—which is unthinkable for supposedly self-sufficient creatures,” notes Bretagnolle, who also points to the increasingly widespread use of transhumance among major beekeepers. “They follow the flowering cycles of crops and move their hives around between the south and the north of France and up into the mountains. This practice is obviously not without problems, such as the potential spread of diseases.” 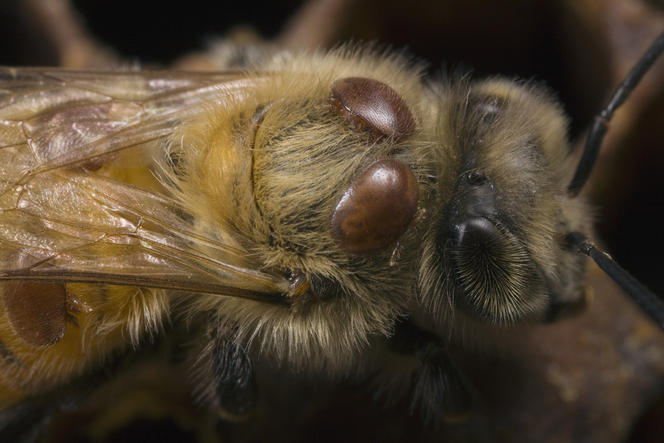 In exactly the same way as a tick, the mite Varroa destructor (here in red) attaches itself to the bee and pierces its skin in order to feed on hemolymph, the equivalent of blood in insects. 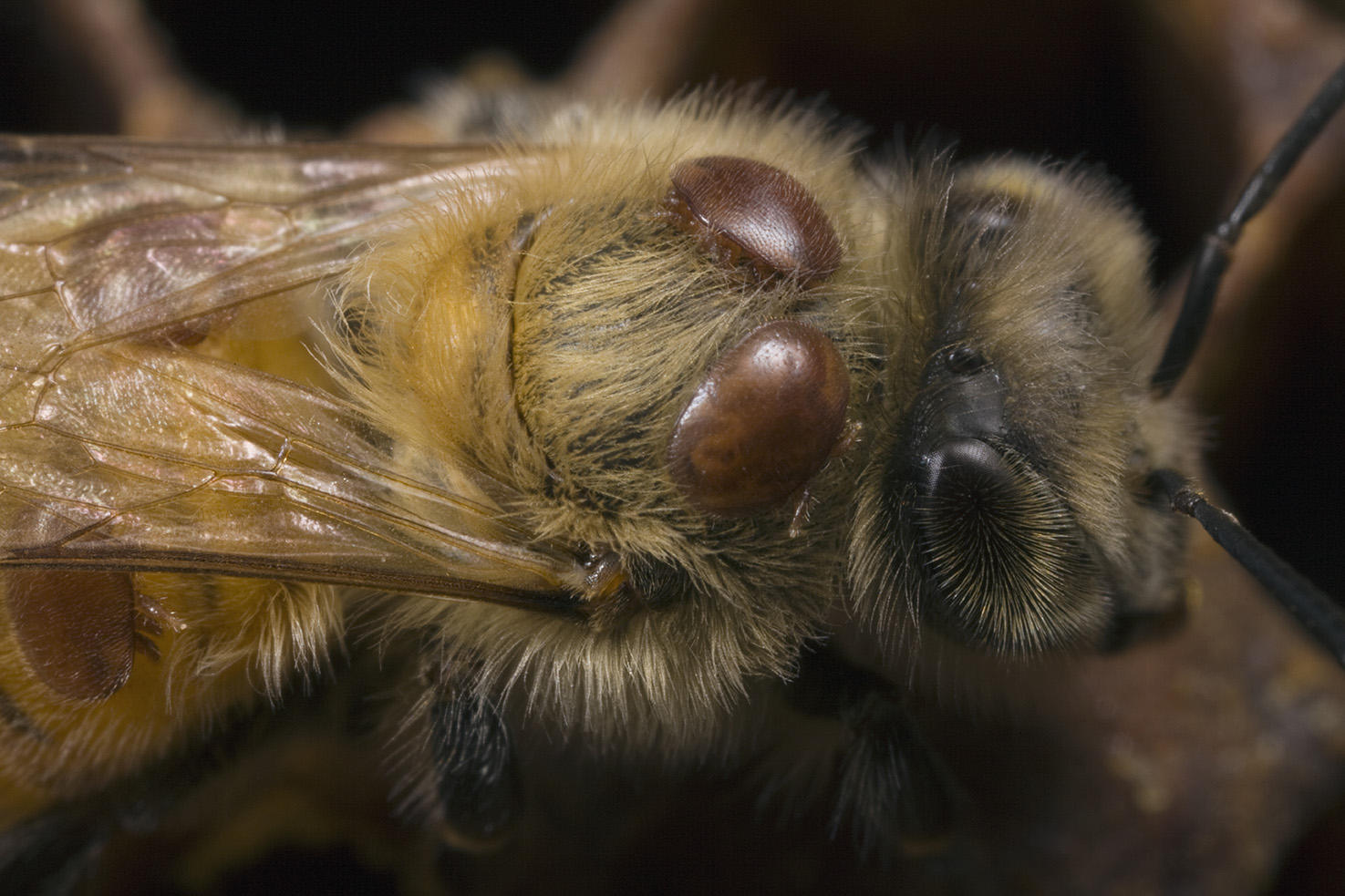 In the news recently, the yellow-legged—or Asian—hornet, which was accidentally introduced in 2004 (see our video), has become a real threat to the already weakened colonies of Southeastern France. Yet for several decades now, bees have mostly been confronted to extremely virulent pathogens, the majority of which have been imported by accident. These include the bacteria responsible for European and American foul brood,8 microsporidia (microscopic fungi) such as Nosema ceranae and Nosema apis that cause acute diarrhea potentially fatal to bees, but also, and above all, the pathogen most feared by beekeepers: the varroa mite, which arrived from Asia in the 1970s. “This parasite, a vector for many viruses, attaches itself to bees and pierces their skin to feed on hemolymph (the blood equivalent of insects),” says Biron. “One of the viruses transmitted by this mite, CBPV (Chronic Bee Paralysis Virus), causes tremors that are occasionally mistaken by beekeepers for the effects of neonicotinoids.” Fatal synergistic effects between pathogens and insecticides have also been demonstrated: thus Nosema ceranae infection doubles the mortality rate among bees exposed to low doses of insecticides normally considered non-lethal.

A final explanation for the increased fragility of the colonies is the massive import of queens from other subspecies.9 “Beginning in 1995, faced with the inadequate numbers of black bee queens bred locally, French beekeepers massively turned to countries such as Italy and Greece, where real “queen factories” produce up to 100,000 individuals a year,” explains Garnery. However, the problem is that in addition to carrying pathogens unknown to black bees, these queens from subspecies native to Italy (Ligustica), Greece (Cecropia and Carnica) or the Caucasians (Apis mellifera caucasica), are poorly adapted to ecosystems in France such as the types of flowers available, flowering cycles, climate, and so on. “These queens lay in January and February, at a time when there are no available food sources in our northern latitudes,” adds Garnery. “To make sure that the workers hatched from these eggs do not die of starvation, they must be maintained artificially with sugar, which interferes with the workings of natural selection, thus preventing them from adapting to their new environment.” 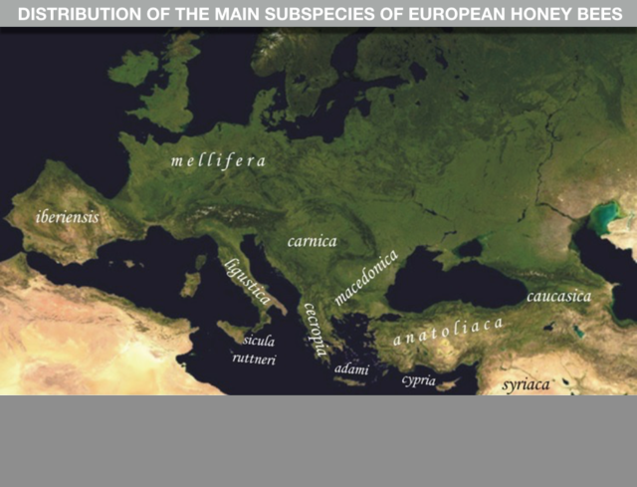 The black bee (Apis mellifera mellifera) inhabits the geographical zone extending from the Pyrenees to Scandinavia. More and more beekeepers are importing queens from Greek and Italian subspecies that are poorly adapted to French ecosystems. 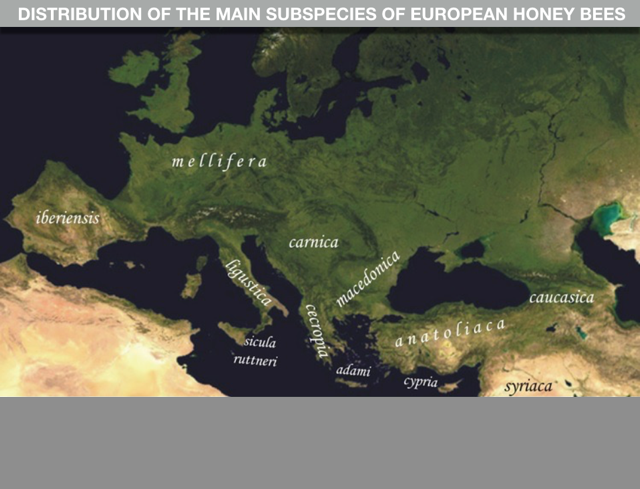 The black bee (Apis mellifera mellifera) inhabits the geographical zone extending from the Pyrenees to Scandinavia. More and more beekeepers are importing queens from Greek and Italian subspecies that are poorly adapted to French ecosystems.
L. GARNERY
L. GARNERY
Share
Share
We have very little control over bee genetics: a queen is fertilized by 15 to 20 males at a time.

Another major problem is that these massive importations result in the poor control of gene pools with the attendant risk of pollution of the genome of the black bee, which to date is the type of bee best adapted to conditions in France. “We have very little control over bee genetics,” continues Garnery. “Although there is indeed only one queen per hive, from whom all workers are descended, she is fertilized by 15 to 20 males at a time! Under these conditions, it is difficult to ensure selection, in contrast with plants and domestic animals, for instance.”

Consequently, beekeepers are no longer sure of whether their hives contain black bees, Italian bees, Greek bees or hybrids of several species. “This is why it is essential to ensure the conservation and sustainable development of each subspecies of honey bee, and of black bees in particular,” concludes Garnery. In addition to conservation measures, the researcher goes as far as to suggest that the French black bee conservatories should produce queens on as near “industrial” a scale as possible, working hand-in-hand for instance with professional beekeepers in order to offer French ones an alternative to Italian and Greek queens, and thus actively helping to reverse the fortunes of France’s bee colonies.

Article
Of Bees and Men

Article
How Honeybees Learn from Floor to Ceiling