Home / Articles / When Productivism is Bad for Agriculture

When Productivism is Bad for Agriculture

Home / Articles / When Productivism is Bad for Agriculture

When Productivism is Bad for Agriculture

Massive pesticide use increases the burden on farmers' budgets without any real impact on yields, according to the researchers who work with farmers at the LTSER site at Chizé (western France).
Stephane LEITENBERGER/REA
Share
Share
Vincent Bretagnolle is studying alternatives to intensive agriculture over an area of 450 square kilometers of farmland south of Niort, in western France. He told CNRS News how reduced reliance on pesticides can increase farmers' incomes without affecting their production.

It is somewhat unusual to be able to carry out experiments over a 450-square-kilometer area, as you do at the Chizé long-term socio-ecological research (LTSER) site. Can you tell us about the principles underlying your research?
Vincent Bretagnolle:1 The LTSER Zone Atelier 'Plaine et Val de Sèvres'—that's its official name—was set up in 1994 because we had come to the conclusion that the productivist agricultural model had run its course. It damages the environment and biodiversity, is harmful to health—first and foremost that of farmers—and is no longer economically viable, since income from agriculture continues to fall. This raises the question of which model needs to be invented for the future. At Chizé, we decided to investigate agroecology,  in other words a form of sustainable farming making use of nature's resources. However, unlike most studies that rely on theoretical models or carried out at experimental stations, we test all our hypotheses under real conditions, thanks to the participation of nearly 200 farmers who have agreed to work with us over the last ten years.

Can you describe your study area, specifically?
V. B.: It is one of France's main cereal-producing regions, where wheat, rapeseed and sunflowers are grown, as well as maize and alfalfa. As the land is very poor, livestock farming is still widespread, although grazing has been replaced by stabling, in which the animals are kept all year round. There are currently 450 farms within the zone, which has been designated as a Natura 2000 area due to the presence of protected birds such as harriers and little bustards. Although there are still hedgerows, groves and some vines in the southern part, these landscape features, so attractive to insects and birds, are gradually disappearing. 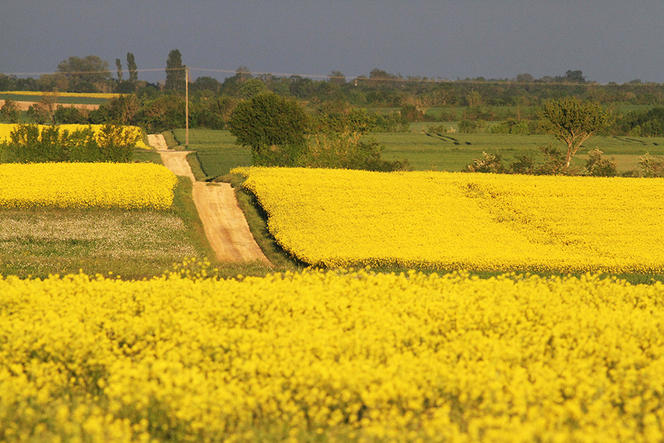 For the last ten years, researchers at the LTSER site have worked closely with 200 farms growing wheat, rapeseed and sunflowers. 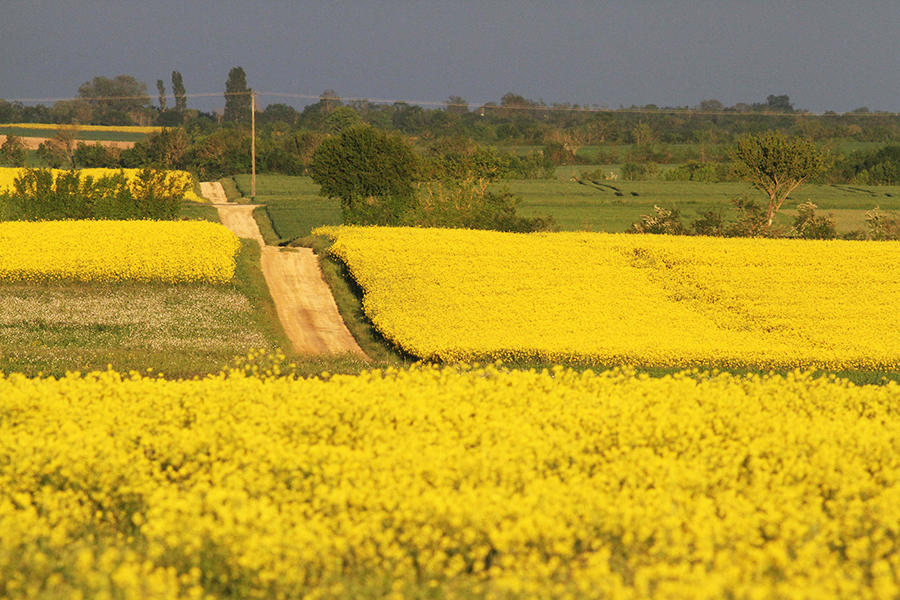 One of the various studies you have carried out in recent years specifically concerns reduced pesticide use and its impact on farmers.
V. B.: This is a series of studies that we initiated following the Écophyto Plan, launched in the wake of the 2007 Grenelle Environment Forum.

lowering extensive use of herbicides and nitrogen products by 30-50% had no effect on yields, which remained stable.

At the time, the French government aimed to halve pesticide use in 10 years, a goal that has repeatedly been deferred. We therefore asked ourselves whether it was technically possible to curb such use by 50%, and what impacts this would have on farmers' agricultural yields and incomes, as well as on biodiversity. At Chizé, we are mainly concerned with herbicides used to control weeds, wild plants such as poppies and cornflowers that grow on farmland and supposedly compete with crops. We also wished to study the ambiguous role of nitrogenous fertilizers, which are of course taken up not only by the cereals grown, but also by the weeds we are attempting to control.

What results have you achieved?
V. B.: We have performed several experiments. One of them, conducted on a total of 56 plots, assessed the respective effects of reducing herbicides and nitrogen on wheat crops over a year, which represents a complete crop cycle. The results were spectacular: lowering extensive use of these products by 30-50% had no effect on yields, which remained stable. In other words, the yield is the same even though the amounts of pesticides are more or less halved. As a result, farmers' incomes increase significantly, since they purchase not only fewer chemicals but also less diesel fuel to apply them: in some cases, earnings can rise by as much as €200 per hectare. These results have since been confirmed by longer studies carried out over a five-year period on wheat, rapeseed, maize and sunflowers.

Don't your conclusions contradict the promises made by pesticide manufacturers?
V. B.: Our observations do indeed go against the results obtained by pesticide manufacturers and by certain technical institutes. One possible explanation is that our experimental environments are very different. Industrials test their products on small, very closely monitored plots in optimal circumstances, whereas we work under real conditions, over a large area, and we have to deal with external factors such as the weather, different types of soil, biodiversity loss, and so on. What we are able to say today is that our research shows no detectable link between herbicides, weeds and output. The fact is that agricultural yields have not increased for the last twenty years, despite constant improvement in crop varieties. We have reached the model's limits. 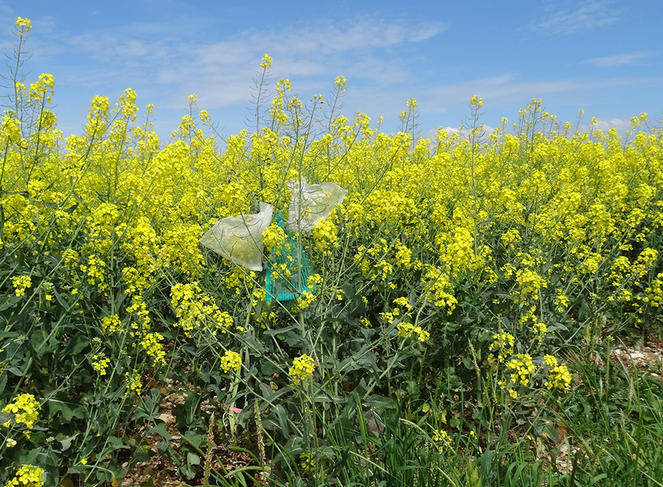 On this plot, rapeseed flowers are covered with netting to prevent any contact with pollinators. The absence of insects reduces yields by 30%, according to research carried out at Chizé. 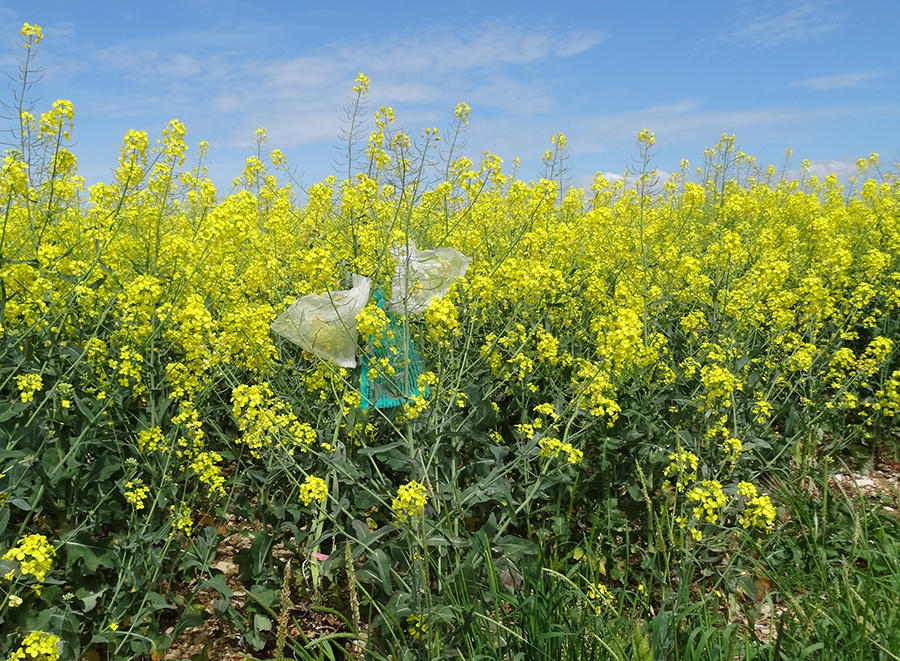 On this plot, rapeseed flowers are covered with netting to prevent any contact with pollinators. The absence of insects reduces yields by 30%, according to research carried out at Chizé.
J.-L GAUTIER
J.-L GAUTIER
Share
Share

Another aspect of your research focuses on the role of pollinating insects in agricultural production. Can you tell us more about this?
V. B.: In the countryside, both the number and diversity of pollinating insects, especially bees, have continued to decline: they are either directly killed by insecticides, or they see part of their food resources—wild flowers, meadows, hedgerows, etc—eliminated by herbicides and by repeated alterations to the landscape. This directly impacts agricultural output. For instance, research in the Chizé area shows that bees play a key role in the production of rapeseed and sunflowers, which are mistakenly thought to be exclusively wind-pollinated: there is an approximately 30% difference in yield, which is substantial, depending on whether bees have access to crops or not. To measure this, we covered some rapeseed and sunflower plants with netting so as to keep insects away from the flowers, and we also compared yields from plots located in widely differing landscapes, some with abundant hedgerows and meadows encouraging the presence of insects, while others were devoid of such features. This is where being able to carry out research over an entire region makes all the difference!

So biodiversity really is an aid to agricultural production?
V. B.: Yes, this is true not only for bees that pollinate crops but also for the animal species that play a role in the biological control of pests: for instance, beetles, such as ground beetles, are valuable aids to crops, since they eat slugs, aphids and seeds of weeds. The problem is that insect populations are plummeting in rural areas: in 25 years, ground beetles at the Chizé LTSER site have dropped by 80%. At the same time, bird numbers have collapsed in the area, partly because they have fewer insects to feed on, and partly because the refuge environments in which they nest (meadows, dead trees, stone walls, etc) are shrinking. The situation today is so bad that it isn't enough to alter just one parameter, such as reducing inputs. It is the whole model that needs changing, and that can't be achieved without the farmers.

Article
Pasteur beyond the legend
Productivity