Home / Articles / The blob creeps into the homes of the French

The blob creeps into the homes of the French

Home / Articles / The blob creeps into the homes of the French

The blob creeps into the homes of the French

The blob is easy to grow, and lends itself to participatory science experiments.
Audrey Dussutour
Share
Share
As a week of experiments begins in 5,000 schools in connection with this strange unicellular organism, the biologist Audrey Dussutour is looking for 10,000 volunteers for her next participatory science experiment. The goal is to understand how global warming affects the blob, which is central to the forest ecosystems where it lives.

Since the start of the school year, Audrey Dussutour, who is a biologist at the Research Center on Animal Cognition (CRCA),1 has practically spent less time on her research than on guiding teachers in preparation for the "Grow your blob" educational operation, which was launched in 5,000 educational institutions. "Everyday, I spend 4 to 5 hours answering questions from teachers on the experiment's Facebook page," explains the keen biologist who was recently awarded – with good reason! – the CNRS Scientific Mediation Medal. The effort was worthwhile, for in addition to shining a light on the research surrounding this unique unicellular being – at the International Space Station (ISS), Thomas Pesquet is conducting the same trials as the students – it has provided young children with the opportunity to get acquainted with the scientific process. Not tired in the least, Dussutour is preparing a new and unprecedented participatory science experiment in relation to the blob and climate change, which is due to take place in the spring of 2022 and is now open for registration ("The research behind the blob"). 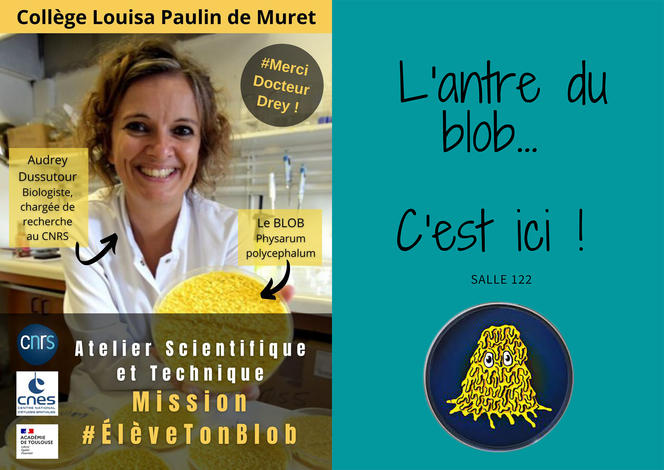 Posters made by secondary school students for the "Grow your blob" experiment. 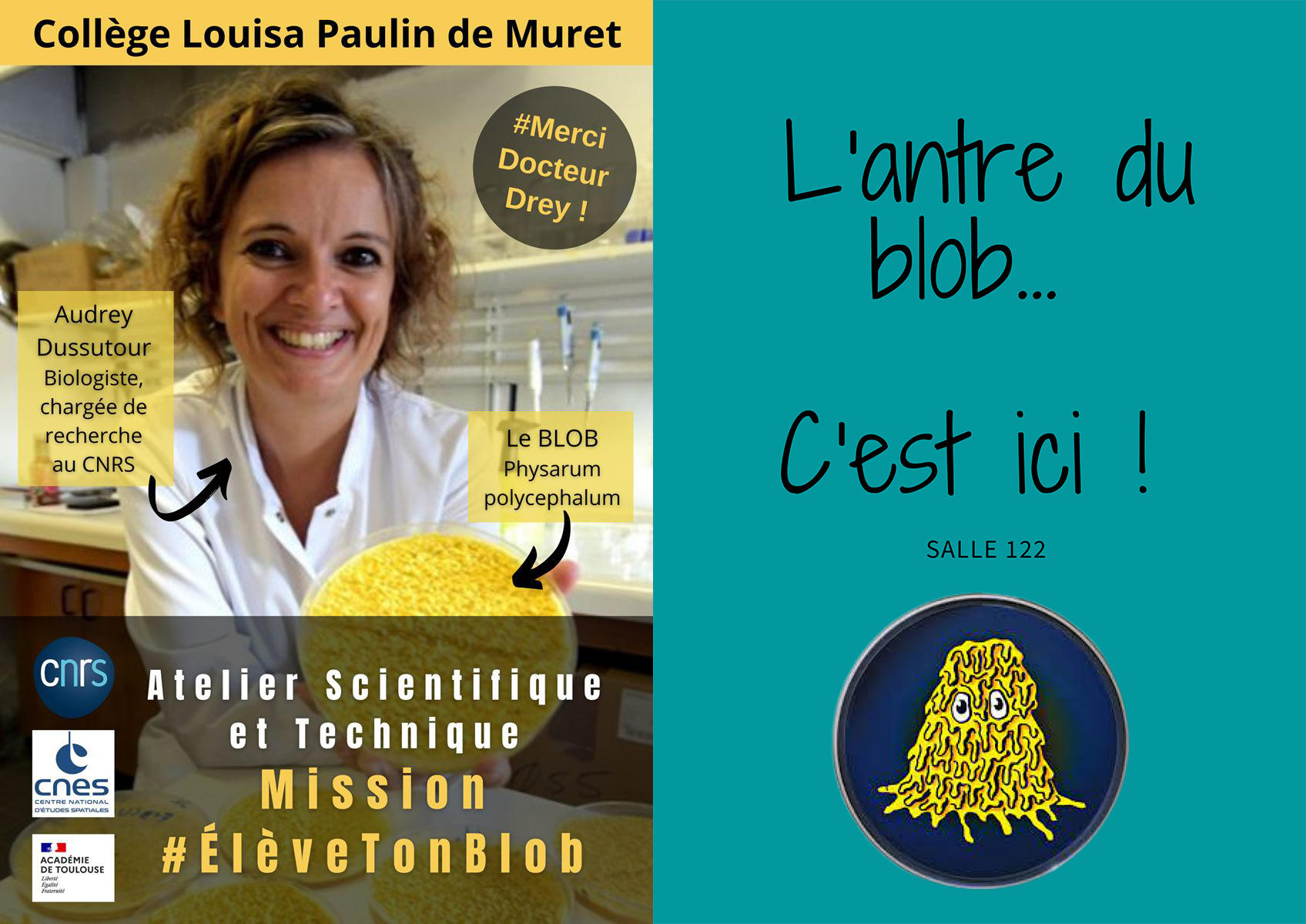 The busy life of the blob

The blob – neither an animal nor a fungus nor a plant – is one of very few organisms consisting of a single cell that is visible to the naked eye: it measures up to 20 square centimetres in nature, whereas most of its unicellular counterparts (bacteria, microalgae, amoebae, etc.) are smaller than 200 microns. The least that can be said is that this viscous being with no definite form, which moves at an average speed of 1 centimetre per hour, has a much busier life than thought.

"Since the late 1990s, its exceptional size has enabled researchers to use protocols usually reserved for animals," recounts Dussutour, a specialist in animal behaviour who has devoted 100% of her time to Physarum polycephalum, the blob's scientific name. Maze experiments have revealed the organism's strategies for finding a source of food placed at the exit of the labyrinth, while learning trials have shown that it can not only learn and memorise new information, but also transmit it to one of its fellows by fusing with it!

The blob reproduces sexually – there are 720 distinct sexual types – and can easily be cloned; it has multiple nuclei and hence copies of its DNA, and can be cut into pieces, thereby giving birth to new individuals. Dussutour believes these organisms even have individuality, pointing to the different behaviours between the various strains she has studied. "The American blob we sent to schools is extremely resilient, and triples in size every day when it is fed properly," she points out. "The strain I brought back from Australia at the end of my postdoctoral fellowship is more fragile, and less resistant to differences in temperature."

Their food preferences also vary, as the Australian blob feeds on organic oats (at least in the laboratory, for its diet in nature is based on bacteria and fungi), while the American strain prefers a well-known industrial brand. "Not liking organic food is not totally surprising for a blob. There are more microbes (fungi, bacteria) in untreated food, and while this does not pose a risk for humans, it can be dangerous for a unicellular organism." 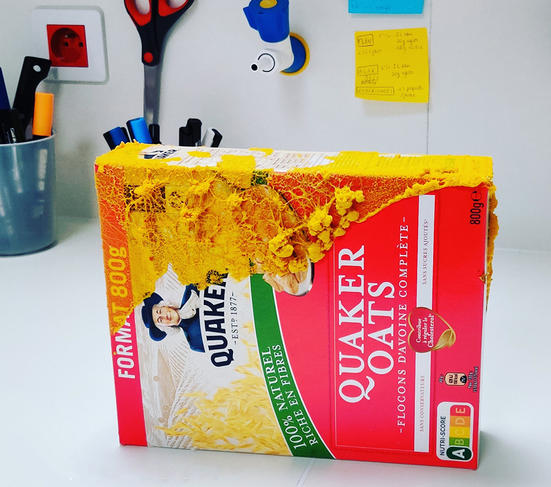 While the Australian blob feeds on organic oats (at least in the laboratory), the American strain prefers a well-known industrial brand. 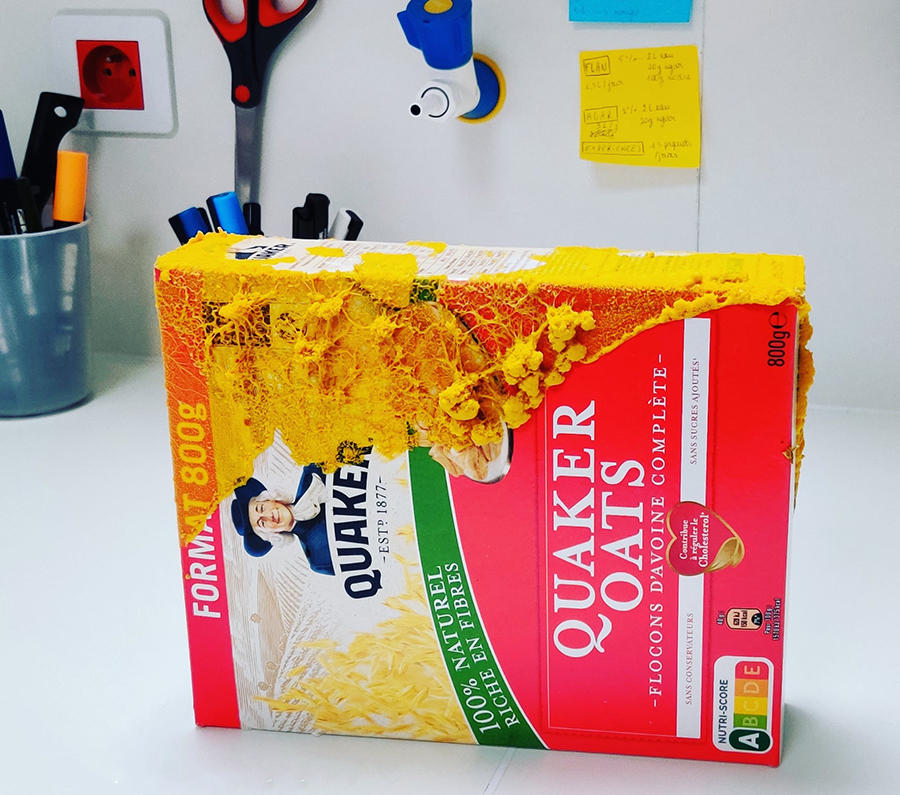 Another distinctive feature, and not the least, is that blobs are biologically immortal provided the right conditions are met. Failing this – a lack of nutrients or absence of water – they dry up and become dormant until the environment once again becomes favourable. These blob "sclerotia", as they are called, were sent to schools as part of the "Grow your blob" operation, in which students awaken them by spraying them with water.

The dual experiments that will be conducted by 5,000 classes today were already carried out at the ISS in September, in an effort to determine the influence of weightlessness on Physarum. These tests include two distinct protocols: exploration and exploitation. "Exploration consists in observing the movements the blob makes in its dish while searching for food. In this protocol, it is not fed for the entire 5-day duration of the trial." For the experiment at the ISS, the French national centre for space studies, CNES, made sure that the blob was placed in a hermetically sealed container, as it is not unusual for it to come out in search of food! 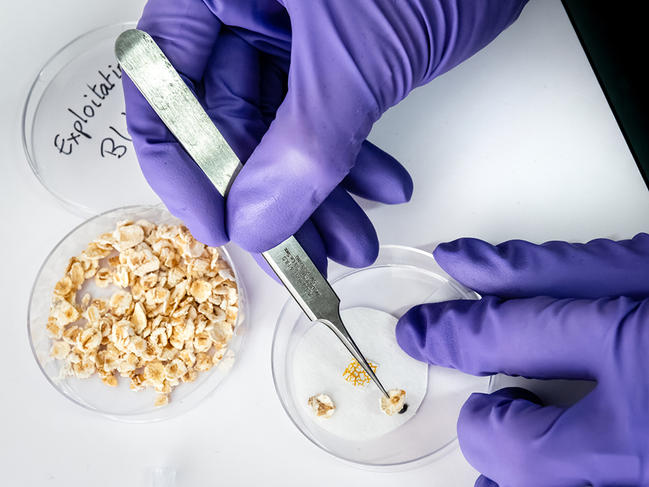 In the "exploitation" experiment, four oat flakes are placed around the blob. 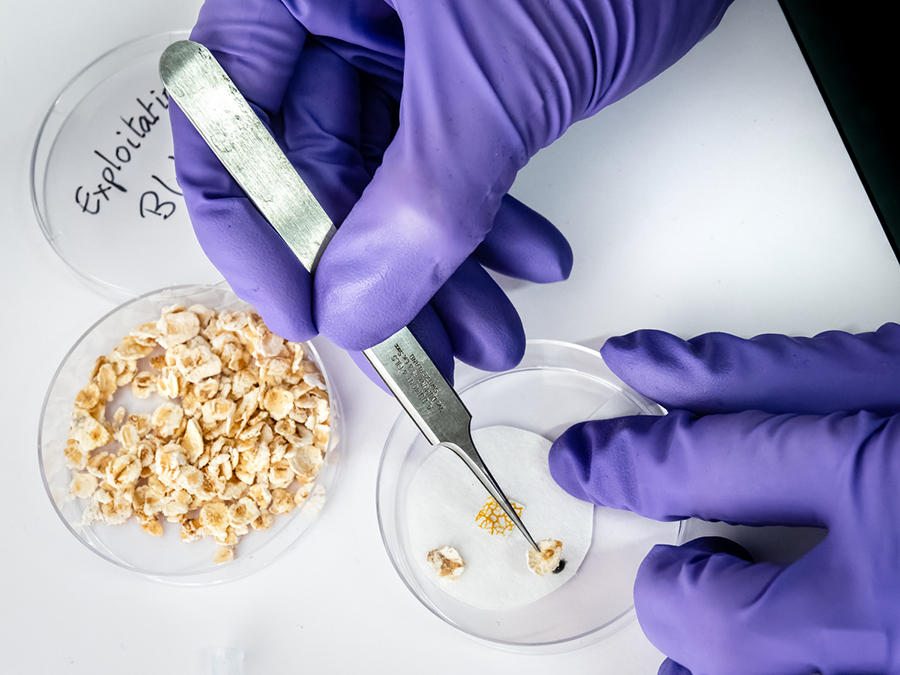 "The exploitation process observes how Physarum uses its venous network to connect the oats placed around it." Dussutour admits that these protocols are not new, as they have been performed in the past, but the fact that they are being implemented 5,000 times gives them greater weight, which is why the scientist hopes she can use at least 10% of the data collected.

Dussutour trusts the new experiment, for which she has invited 10,000 volunteers in the spring of 2022 – including private individuals, schoolchildren, associations for the unemployed, retirement homes, and prisons – will be totally unprecedented.

With "The research behind the blob", her objective is to understand the effects of climate change on this organism accustomed to the undergrowth of temperate countries. "Myxomycetes, the class to which it belongs, is essential for the balance of forest ecosystems. By eating bacteria and fungi, it consumes organic matter and excretes minerals that are then used by plants. However, the blob does not like being too hot, so the question arises as to how it will react to rising temperatures if the changes are too sudden."

The experiment, which will last at least five days, will require approximately one hour of daily handling at a fixed time. Participants will need 9-cm Petri dishes, a heat lamp, and a small thermometer. Every day, they will have to take a photograph, which will determine the blob's growth in the experimental conditions indicated – the idea being to change daily temperatures more or less abruptly by moving the lamp closer or further away from the dish. Dussutour has devised a few dozen different temperature profiles to be tested. 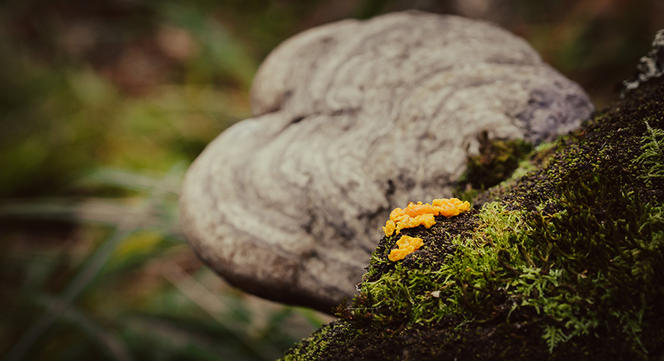 The blob, or Physarum polycephalum, lives in temperate forests. 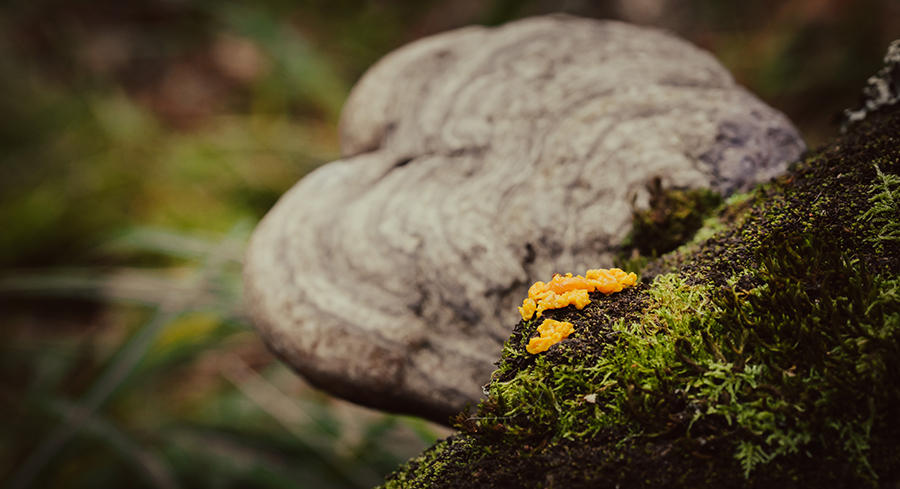 "The more participants there are, the more protocols we can use, keeping in mind that at least 50 people must carry out the same experiment in order to obtain reliable results. It’s the famous reproducibility of research findings imperative," explains the scientist, who intends to get volunteers to take part in every stage of experimentation including handling, data gathering and interpretation, results presentation and article writing, as well as submission to a scientific journal, which will either accept it or not. "I think people will be surprised to discover what our job as researchers actually entails." For Dussutour, one thing is certain: "The participants will have to be as rigorous as possible, as the scientific community will be keeping a close eye on our results."

See author's bio
How are oceans born?Previous
The James Webb Space Telescope is set to explore the early UniverseNext

Article
The new frontiers of the living world
Blob