Treatment plant located in Colombes, Hauts-de-Seine.
Michel BARET/Getty Images
Share
Share
Innovative techniques for decontaminating water herald the water treatment plants of the future. Here are a few of the processes that were presented this past July at the Engineering Goes Green conference in Paris.

Representing no less than 65% of our body, water is indispensable to not only our survival, but also that of animals, plants, and the environment. Yet our domestic and industrial activities (textiles, pharmaceuticals...) contaminate it with a bevy of pollutants that treatment plants are unable to entirely eliminate. These pollutants subsequently accumulate in rivers, oceans, and our tap water! In order to preserve the quality of water and to contend with the growing shortage of this vital natural resource, a number of CNRS teams have developed innovative techniques for water decontamination. This involves a dual challenge, namely improving existing treatment systems, and supplementing them with new ones that can destroy the pollutants that are difficult to eliminate today.

In France, over 20,000 treatment plants process 5 billion cubic metres of wastewater. Water undergoes various treatments depending on the type of pollutants involved, including organic matter from living beings, heavy metals, and pesticides, among others. The most common technique for eliminating organic matter is the activated mud process, which uses bacterial degradation. "This process is highly effective in itself, but includes energy-intensive stages such as the mixing and aeration of tanks where bacteria can develop, etc.," points out Naoufel Haddour of the Laboratoire ampère de Lyon.1 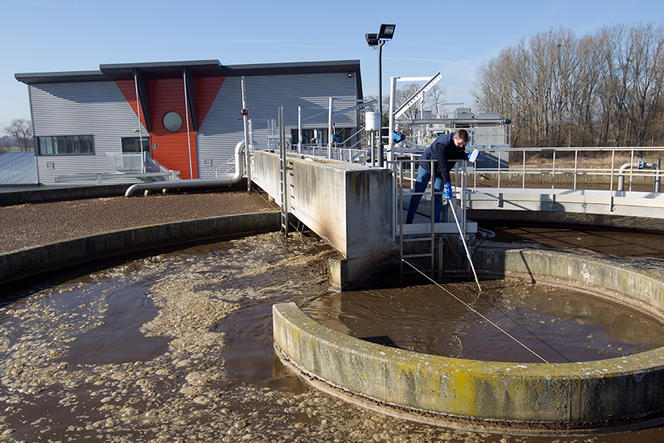 Bacterial activity, which is notably obtained thanks to activated mud processes, can degrade carbon, nitrogen, and phosphorus pollution. 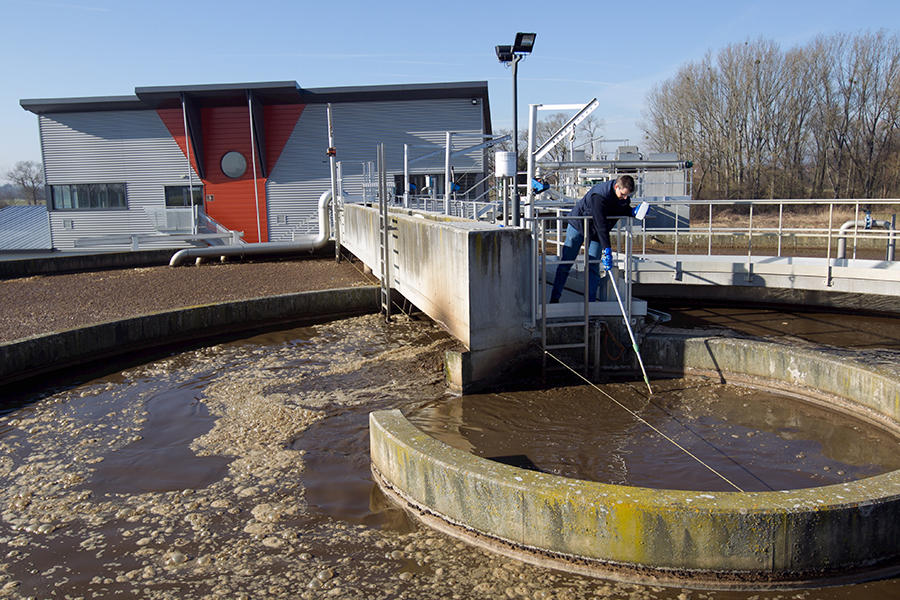 To find a solution, the physical chemist and his colleagues are developing a technique that not only degrades organic matter thanks to bacteria–like the activated mud process–but also produces electricity! This is the concept behind the microbial fuel cell, or biopile. "This type of system could help treatment plants produce their own operating electricity, and to thereby be self-sufficient," Haddour stresses. All the more reason to wisely assess the value of wastewater!

Concretely, microbial fuel cells include a positive electrode (cathode) supplied with oxygen, and a negative electrode (anode) topped with a biofilm containing "electroactive" bacteria, which can help produce electricity. The two electrodes, which are connected by an external electrical circuit, are submerged in the water that is to be decontaminated. "The bacteria degrades organic matter by feeding on it, and in doing so they tear away electrons (negatively charged elementary particles), which they then yield to the anode. These electrons are transferred to the cathode via an external circuit in order to interact with an oxidant, a chemical molecule that captures electrons. This chemical reaction, known as ‘redox’ (oxidation-reduction), leads to a movement of electrons between the two electrodes, which amounts to an electrical current," explains Haddour. 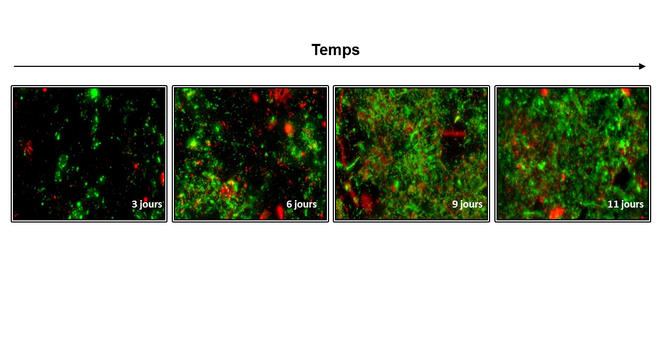 The formation of a bacterial biofilm that produces electricity by degrading organic matter (fluorescence microscopy view). 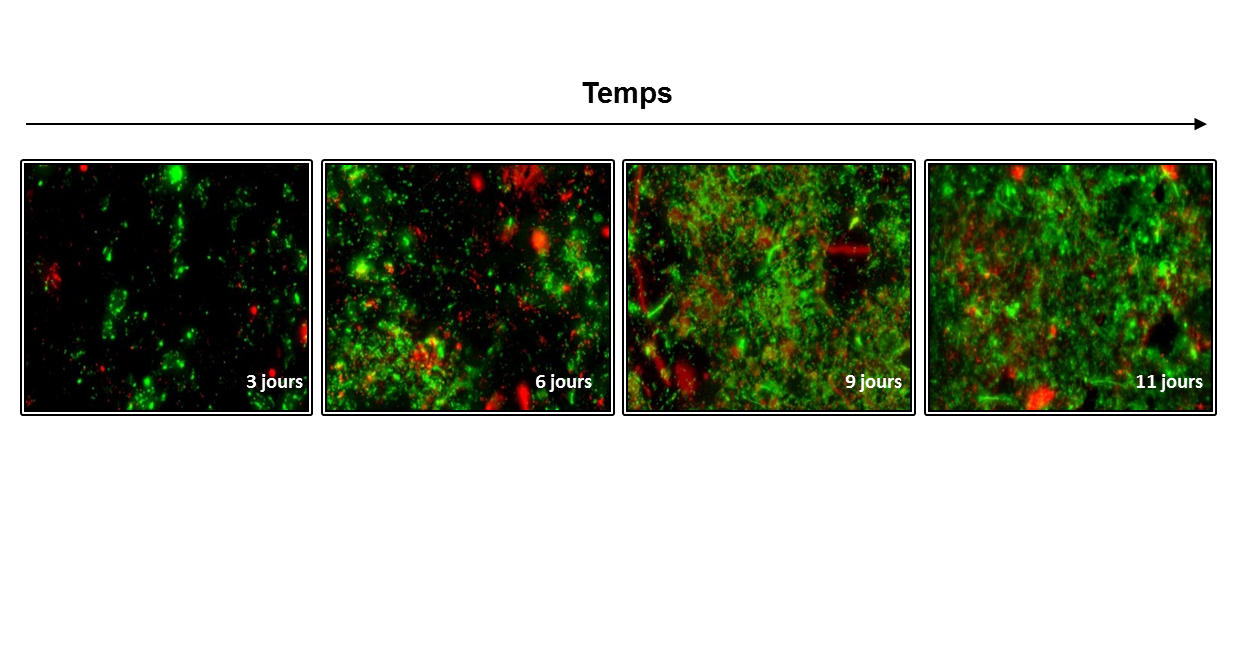 Advanced oxidation, a killer of micropollutants

In addition to decreasing the electricity consumption of treatment plants, another major future challenge is to tackle micropollutants, which cannot be degraded by bacteria, and are a growing cause of concern for public health authorities. Emitted by various "modern" activities (pharmaceutical and cosmetics industries...), these compounds are present in very small concentrations in wastewater, ranging from a nanogramme (1X10-9 g) to a microgramme (1X10-6 g) per litre. They include drug residues, paints, plasticisers (phthalates...), and pesticides. These substances have become particularly toxic for human health and the environment because they have ultimately accumulated in water. 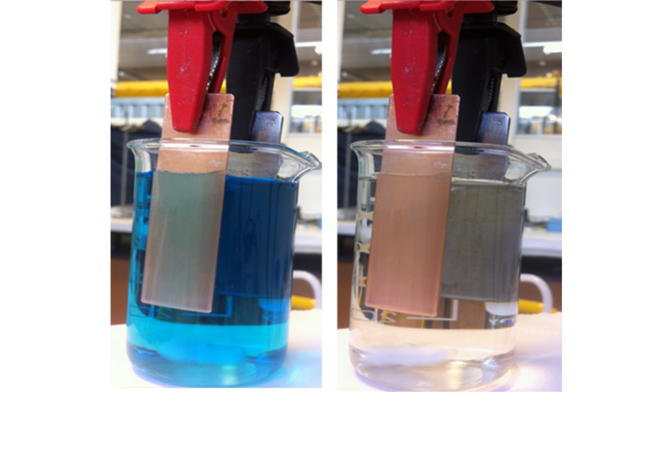 Testing the Galvano-Fenton process, a technique that degrades micropollutants while generating electricity. 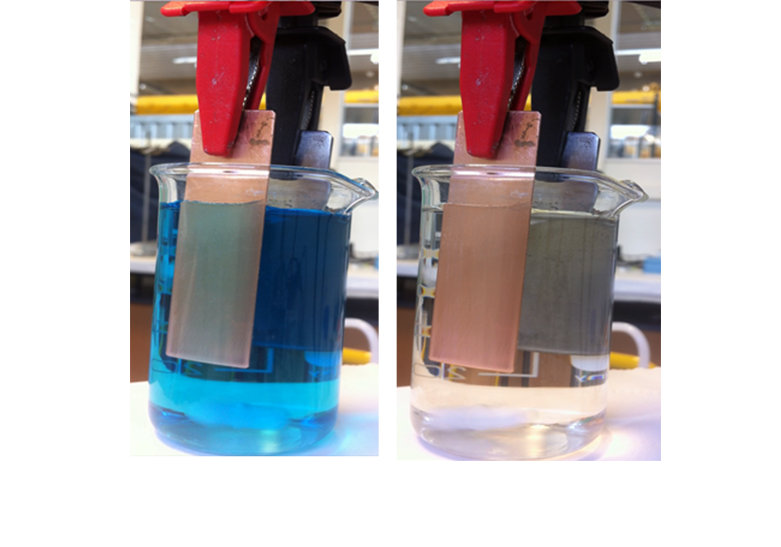 One solution for destroying these molecules is to generate a chemical species that can react with and degrade them, namely hydroxyl radicals (HO•). Consisting of a hydrogen atom, an oxygen atom, and a free electron (represented by a dot), HO• is the second most powerful oxidant on Earth after fluorine!

No less than five processes aiming to produce HO• radicals, referred to as "advanced oxidation processes" (AOP), are under study at the CNRS. "At the Laboratoire ampère de Lyon, in recent years we have developed an electrochemical system that can produce both HO• and electricity," enthuses Haddour. Known as the Galvano-Fenton technique, it is also based on the use of two electrodes connected by an electrical circuit. It can generate the famous HO• as well as electricity by making hydrogen peroxide (oxygenated water; H2O2) react with ferrous ions (Fe2+).2 Patented four years ago, this process is currently being developed by the start-up Lichen, which is being created at l'École centrale de Lyon. "A number of industrial actors, whom we cannot identify at this point due to reasons of confidentiality, have already expressed interested," Haddour reveals.

Yet since this type of compound is costly and potentially unstable, advanced oxidation processes that do not require the addition of any chemical product are also under study. At the Laboratoire réactions et génie des procédés de Nancy,3 the chemist Emmanuel Mousset is working precisely on a technique of this kind. "Referred to as advanced electro-oxidation, our process can generate HO• by applying a current between two electrodes submerged in the solution that is to be decontaminated: a positive (anode), a boron doped diamond (BDD), and a negative (cathode) made of stainless steel. An oxidation reduction reaction subsequently occurs, oxidising the water with HO•." This technique has currently been tested in microreactors—a device with dimensions measuring less than a millimetre—and could be used for the treatment of both municipal and industrial wastewater.

At the Groupe de recherches sur l’énergétique des milieux ionisés4 in Orléans, Olivier Aubry is working on another and equally promising advanced oxidation process that requires no chemical additives: non-thermal plasma. The idea is to apply an electric charge within an environment (such as air) that contains oxygen, and is in contact with the water to be decontaminated. The matter thus enters a particular phase known as a non-thermal plasma, consisting of charged particles, ions, and electrons, including the famous HO•! "Since it requires the use of electricity and therefore has a certain energy cost, this technique is especially interesting for relatively small volumes, such as effluents with a high concentration of drug residue from pharmaceutical and hospital laboratories. It would therefore be used in advance of treatment plants, as a supplement," Aubry adds.

There is also a fourth technique that is based on an even more spectacular physical phenomenon known as hydrodynamic cavitation. "This one involves the creation and implosion of vapour bubbles in a liquid, which most importantly is at room temperature, and hence not heated. This is possible when the liquid is subject to a sufficiently large drop in pressure, beneath 20 millibars for water at room temperature. 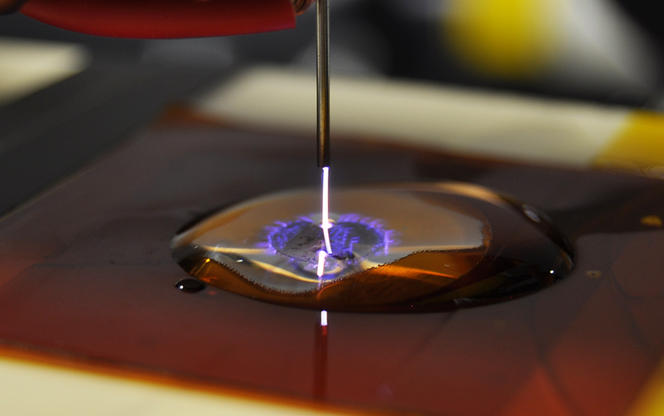 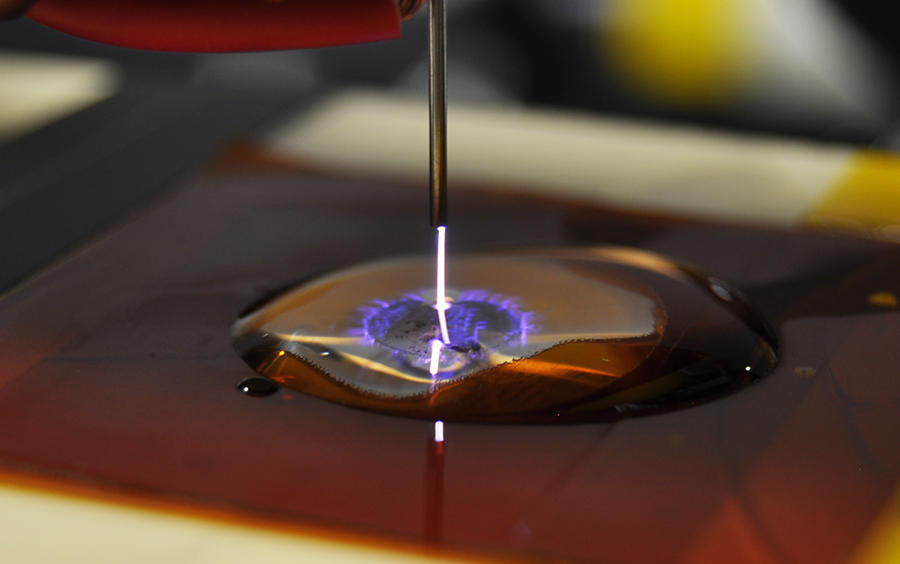 The implosion of bubbles is so violent that it can break down the water molecules (H2O) in the vapour bubbles into hydrogen atoms (H) and HO• radicals," explains Frédéric Ayela, from the Laboratoire des écoulements géophysiques et industriels.5 He and his team are testing this method's effectiveness through the cavitation of luminol—a chemiluminescent compound that emits blue light in the presence of HO•—in on-chip fluid microsystems shielded from external light, with a flow of a few litres per hour.

View of a cavitating flow inside a 1 mm microchannel. The implosion of water vapour clouds breaks down molecules and creates hydroxyl radicals.

Numerous challenges to be met

As we have seen, research for cleaner water is buzzing with activity, although numerous challenges must first be met before we see the techniques described above integrated in treatment plants. It will especially be necessary to show the effectiveness of these processes in the treatment of large volumes of water, given that today "they have proven effective particularly for small volumes of a few millilitres or a few dozen millilitres, whereas a treatment plant processes hundreds of thousands of cubic meters per day," Haddour offers by way of illustration. "If we can find the financing needed to continue our research, in less than five years we could build a demonstrator able to treat hundreds of litres per hour, as opposed to today’s rate of a few litres per hour," Ayela indicates.

For that matter, "we must also ensure that these processes do not produce 'sisters' that are more toxic than the initial micropollutant molecules," adds Aubry. Another challenge is to lower the production costs for these systems through the selection of the materials used, "for example by finding an alternative to the boron-doped diamond used in our system," Mousset cites as an example. Finally, it will be crucial to determine whether one treatment cycle will be enough, or if more than one will be necessary, and if so how many. The water quality of future generations will depend on the ability of researchers to overcome these obstacles.

See author's bio
Computing the Cost of ComputationPrevious
Shells, the Sentinels of the OceanNext