Bats in Drotsky’s caves, Botswana. Although such huge colonies no longer exist in France, they have left their mark on the appearance of caves.
Laurent BRUXELLES
Share
Share
Did the former presence of huge bat colonies in the caves of southern France have an impact on palaeolithic rock art? This is the hypothesis put forward by the geoarchaeologist Laurent Bruxelles, who highlights the spectacular alterations made by these animals to the appearance of cavities.

It turns out that water flowing underground may not be the only factor that fashioned the subterranean caves that fill us with such wonder, whether for their astonishing geological formations or for the paintings and engravings left on their walls by Palaeolithic humans. A new theory now questions the traditional scenario for cave formation: scientists believe that the past presence of huge bat colonies may have significantly altered the appearance of these cavities over the course of time. These changes are mainly caused by the respiration of the mammals, which breathe out CO2 and water vapour, and above all by guano, their highly acidic droppings.

“At the beginning of the 2000s I visited Grosse Marguerite in southeastern France, a fine cave in the Ardèche valley with beautiful concretions,” says geoarchaeologist Laurent Bruxelles, from the TRACES laboratory.1 “One calcite flow in particular had formed a large, still active and very shiny stalactite behind which a group of bats had moved in. Above them you could make out a hole in the ceiling, like a sort of dome, while the stalactite itself was deeply eroded. On the ground there was a huge heap of fermenting guano. It was there that I realised for the first time just how acidic these droppings were.” Most underground caves, in France and elsewhere, form in limestone (also known as karst) massifs. The sedimentary rock is indeed soluble in rainwater, which is slightly acidic, causing the formation of caves and galleries. And the more acidic the pH, the greater the erosion. This can be demonstrated by immersing an egg in a cup of vinegar: its shell – which, like limestone, is mostly made of calcite – will dissolve in less than a day. 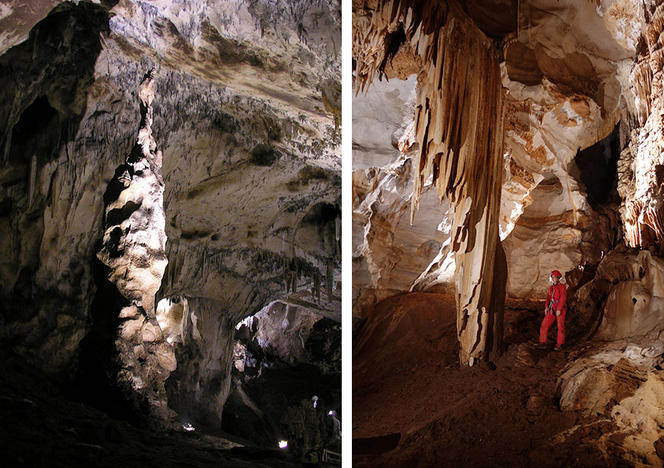 A stalagmite pillar and draperies eaten away by biocorrosion (Isturitz caves, southwestern France, and Miguro cave in the Gard départment, in the south of the country). 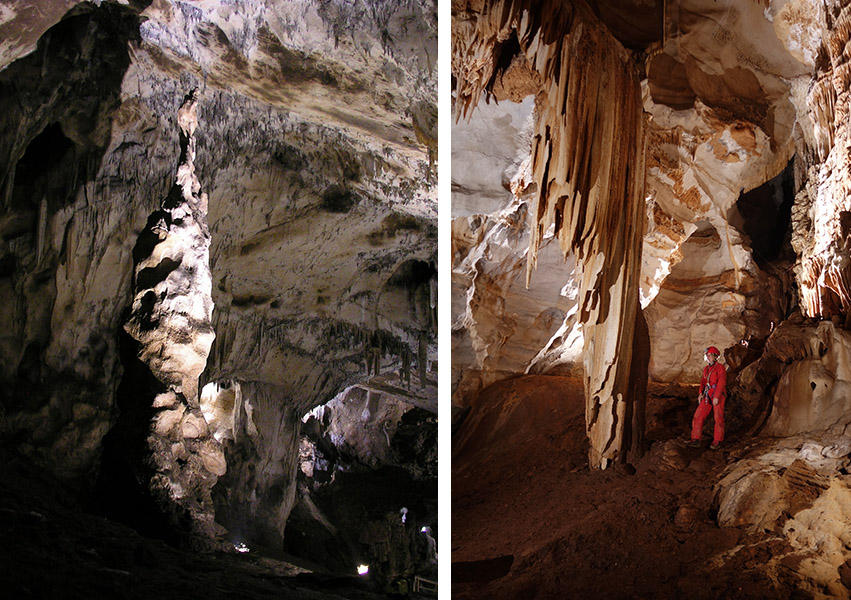 It was only about a decade later, when on a mission in southern Africa, that the researcher was able to confirm what until then had been merely an intuition. While searching for fossils of ancient humans for the Human Origins Programme, and together with other scientists, he visited the famous Gcwihaba caves (also known as Drotsky’s caves) in Botswana, which are home to hundreds of thousands of bats. He saw concretions corroded to the core, and walls covered with a translucent slime, a bacterial film obviously sustained by the presence of guano. It was then that he realised what a cave looks like when completely taken over by bats. “One concretion in particular had totally disappeared. All that remained of this former drapery was a tell-tale ridge, showing how the wall on which it had formed had retreated by several centimetres,” the researcher recalls. “We were looking at the same corrosion processes that we had observed in Ardèche.” The scientists realised that, had there been the slightest trace of rock art on the surface of the walls, it would have been the first thing to disappear.

It remained to be seen whether the process of biocorrosion was widespread, or limited to a few rare cases. The year 2018 saw the launch of a more systematic exploration of caves in France, and since then sixty of them have been examined. The researchers are taking a fresh look at well-known, frequently visited sites with the aim of tracking down any damage that bats might have caused throughout their history. In order to clearly distinguish between the impact of water and that of biocorrosion, the researchers use as a reference caves that are known to have been permanently sealed and therefore uncontaminated by the chiropterans, and that have been opened only recently (usually accidentally), for example when mining a new quarry. “In many cavities that are today free of bats we have identified the same types of alteration as those we observed in Botswana,” Bruxelles explains. “Features that I thought all along had been caused by refilling at one time or another were in fact due to biocorrosion. Traces of phosphate found on the ground and walls provide evidence that bats did once live in these caves, since this substance is present in significant amounts in guano but doesn’t exist in limestone in its natural state.” 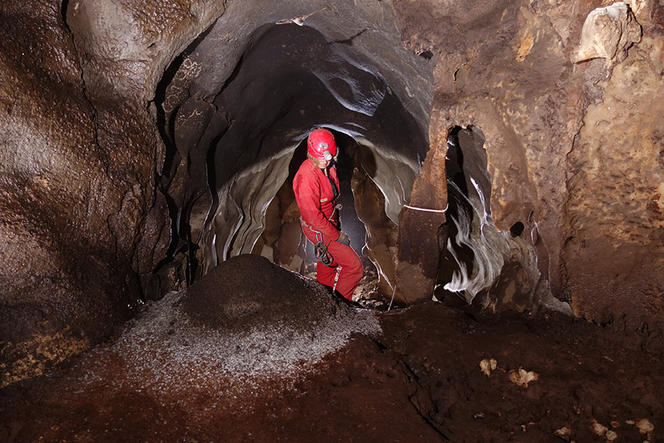 This recent guano deposit has led to the formation of a corrosive, black bacterial film on the walls (Les Excalans, Hérault, southern France). 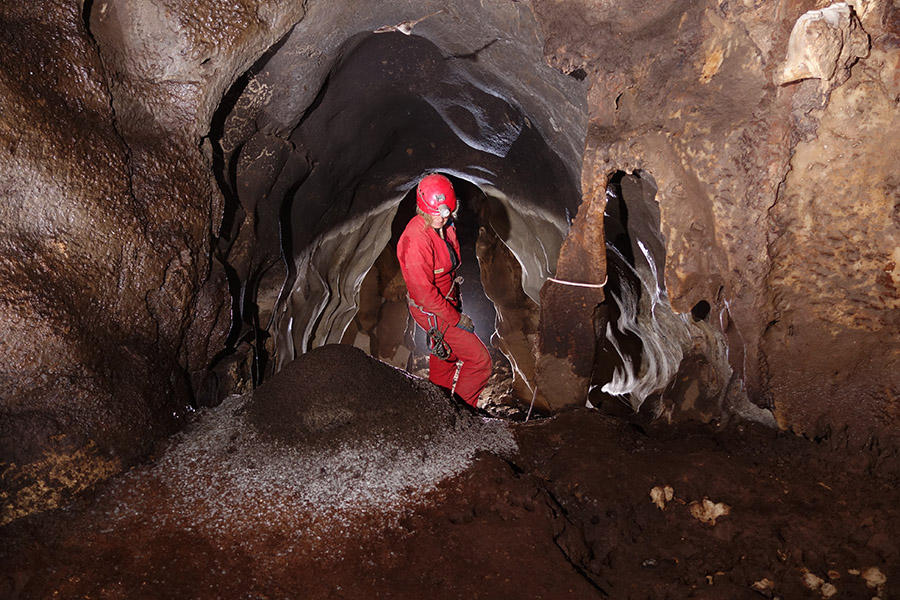 Several types of damage have been identified. Small bell-shaped domes formed in cave ceilings, known as bell holes, are thought to be directly caused by the respiration of bats, who roost there in their tens of thousands, breathing out CO2 and water vapour like all land animals. The condensation on the walls of these two compounds forms carbonic acid, which attacks the limestone. According to the geoarchaeologist, “in some caves, the ceiling is studded with such bell holes hollowed out in the rock, sometimes to a depth of 80 centimetres.” Stalagmites eaten away to the point that they look like apple cores are another distinctive formation. They are thought to have been corroded by bat droppings, thick fossilised layers of which can still be found here and there. “When guano ferments, it releases phosphoric and sulfuric acids, which directly attack the floor and the base of the concretions,” the scientist explains. 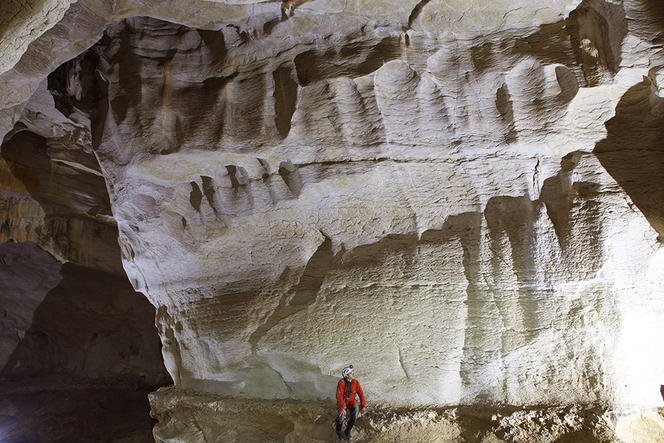 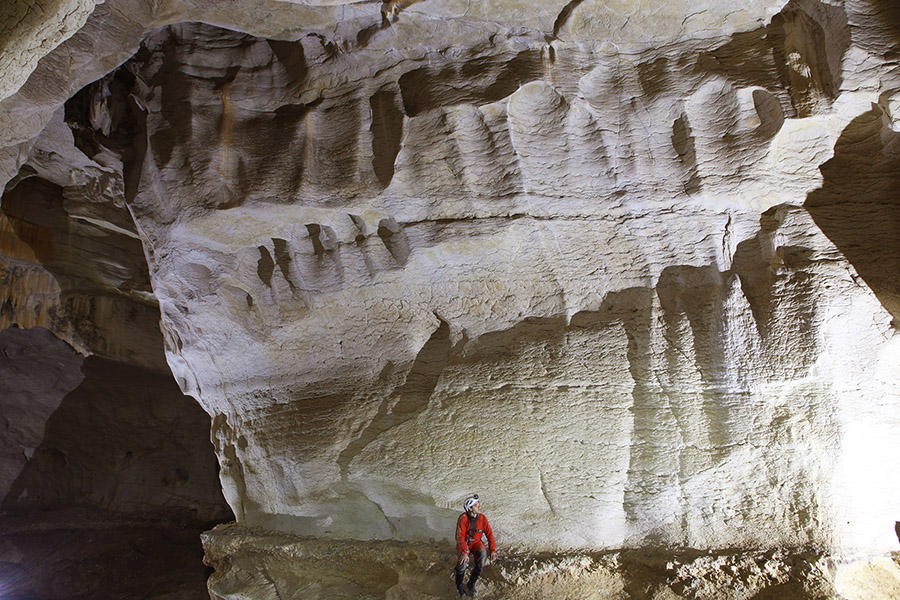 These acids do not just eat away at the cave floor: due to the warmth produced by fermentation, the resulting vapour rises through the air and attacks the adjacent walls, completely reshaping them.  Just like the corroded pillars, they are astonishingly smooth, unlike those purely shaped by the action of water, whose flow creates small irregular features and ripples (also called gouge marks by scientists, due to their similarity to those made by a woodcarver’s chisel). More impressive still, some of the walls have even receded by several centimetres or even decimetres compared with their initial location.

A probable impact on the rock art

What impact might such biocorrosion processes have had on the distribution of rock art in caves where bats are known to have been present? And, more generally, what effect did this have on wall paintings, both in France and in the rest of the world?

“At Le Mas d’Azil in southwestern France, traces of bats are clearly visible in the large galleries devoid of frescoes, but not in the small side passageways where most of the works are concentrated and where signs of initial erosion by water are still visible,” Bruxelles points out. “The Aldène cave, in southern France, is made up of several vast chambers, but only one small lateral corridor contains engravings. The same is true of Coliboaia in Romania.” Wherever there are signs of bat colonies, the researchers have observed that there are no paintings – and vice-versa. The fact that the two appear to be mutually exclusive puzzles scientists: does this mean that some palaeolithic rock art disappeared because of biocorrosion?

“Although we shouldn’t jump to conclusions, these findings question some of the theories put forward until now to explain the presence of paintings and engravings in small galleries away from the large chambers, as is the case at Le Mas d’Azil,” Bruxelles says. “In particular the idea that these works were private, with access limited to a privileged few.” On the other hand, in the Lascaux, Niaux, Chauvet and Cosquer caves, which were all sealed off after the Last Glacial Maximum 22,000 years ago, preventing bats from entering them, paintings are found throughout the site even in the easily accessible large chambers.

The researchers are intrigued by another observation: some of the walls and concretions where rock art is displayed turn out to be astonishingly smooth, as if they had been corroded by the earlier presence of the mammals. “It’s almost as if the bats had prepared the canvas for these palaeolithic artists,” Bruxelles suggests. A hypothesis that remains to be confirmed. 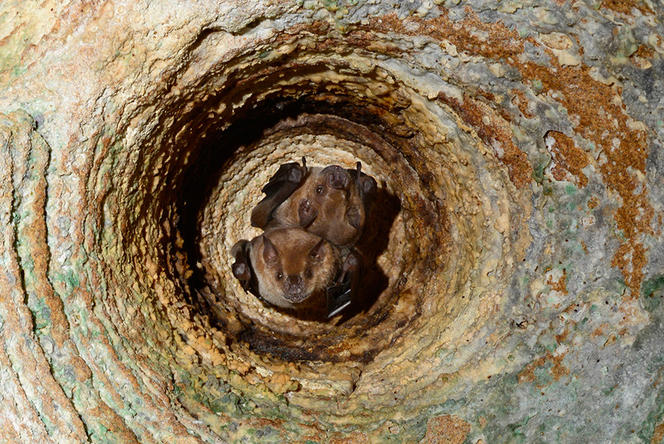 Bats in a “bell hole”, a bell-shaped dome formed in the ceiling, caused only by the acidity of the bats’ breath. Cueva del Indio cave, Puerto Rico. 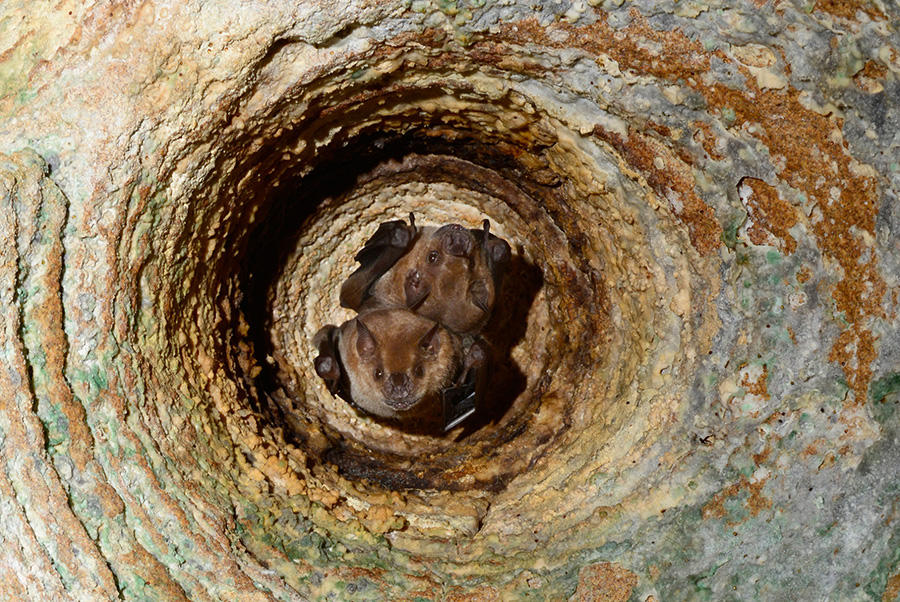 To help them gain a better understanding of biocorrosion processes, the researchers are busy preparing fresh cave explorations both in France and, for the first time, in other countries. “What we want to do now is draw up a complete catalogue of the features caused by the presence of bat colonies, so that we can tell at a glance the caves that were formerly occupied by these animals,” Bruxelles explains. Other research focusing on fossilised (and dated) guano is also planned. This material is proving to be a mine of information, and should enable the scientists to identify the bat species concerned (thanks to DNA analysis) as well as their diet, and hence infer the type of environment in which they lived. “Guano could well be yet another tool enabling researchers to interpret archaeological sites,” Bruxelles enthuses.

See author's bio
The end of the death penalty marked a sharp turn in French historyPrevious
Bioinformatics, a key ally in the fight against Covid-19Next