Home / Articles / Mapping Our Way Out of Disaster

Mapping Our Way Out of Disaster

Mapping Our Way Out of Disaster

Map showing the Saint-Jean Bay region, Saint-Barthélémy (French West Indies) on September 8, 2017. Buildings moderately and strongly affected by Hurricane Irma are tagged with red and orange spots.
SERTIT/ CNRS PHOTOTHEQUE
Share
Share
When natural or human-induced disasters strike, emergency services have to race against the clock to bring timely support to populations in trouble. First off the blocks are crisis-mappers—like those at the SERTIT—whose vital role is to track a catastrophe’s impact so that aid can follow.

Earthquakes, volcanoes, wildfires, floods and tsunamis… Just some of the Earth’s reminders that humans, for all their advances, still fall prey to natural phenomena—not to mention the devastation that manmade disasters and humanitarian crises also wreak. In order to channel resources quickly and effectively, accurate information is needed on what damage has occurred and where. A challenge that drives the SERTIT1 rapid-mapping platform to produce increasingly high-resolution maps from remotely-sensed data, at increasingly faster speeds.

As soon as Hurricane Irma hit in September 2017, researchers at the SERTIT were asked to map the terrain so that appropriate crisis-management measures could be deployed in the French overseas territories of Saint-Martin and Saint-Barthélemy. Showing Irma’s trail and scale, their before-and-after images served as guidelines for State civil-protection and environmental services, humanitarian organizations, as well as insurance companies. As Irma progressed, their rapid-mapping support also spread to Puerto Rico and the Dominican Republic, where European firefighters were also posted. 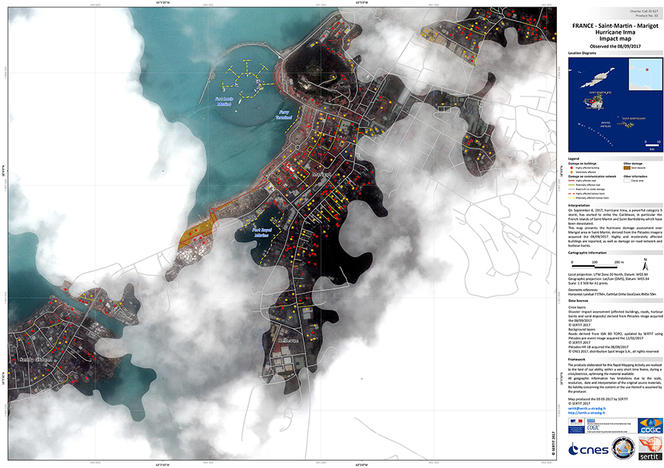 Map showing the damage caused by Hurricane Irma in the Marigot region of Saint-Martin (French West Indies), using data from the Pleiades satellites acquired on September 8, 2017. 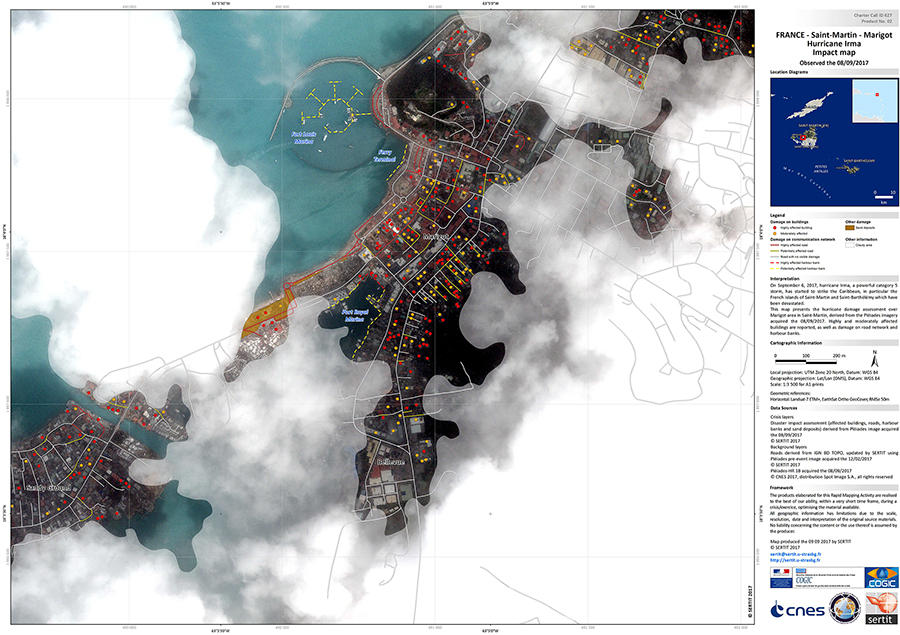 More surprising may be that the SERTIT is based thousands of kilometers from the Caribbean, in the French city of Strasbourg. But its operations rely on remote sensing—information gathered from a distance. “The data we use to produce maps comes mainly from Earth-observation satellites, but also airborne sensors like drones,” explains SERTIT project engineer Mathilde Caspard.

Today, we can get accurate information in just a few hours over vast areas—even the least accessible.

Crisis mapping from remotely-sensed data is in fact a relatively recent field of expertise, dating from the late 1990s. “Before, civil-protection services relied on in-situ information and models,” adds Stéphanie Battiston, deputy head of the SERTIT’s rapid-mapping service, “but it took weeks to evaluate a catastrophe’s scope. Today, we can get accurate information in just a few hours over vast areas—even the least accessible.”

High resolution from high above

In the case of Irma, the SERTIT used very high-resolution space images acquired by the Pléiades satellite system launched by the French government’s space agency CNES,2 supplemented by satellite information provided by other countries. As Battiston explains, rapid mapping “requires collaborations and interactions with a large number of international partners.” In response to Irma, the SERTIT was therefore activated by civil-protection services, in the framework of the two major international collaborations organizing its activity: the International Charter on Space and Major Disasters and the European Union’s Copernicus Emergency Management Service. Both make it easier to share geospatial information between countries when major disasters strike. By the same token, the SERTIT regularly lends its support to “catastrophes affecting any country or region of the world” whenever help is needed. 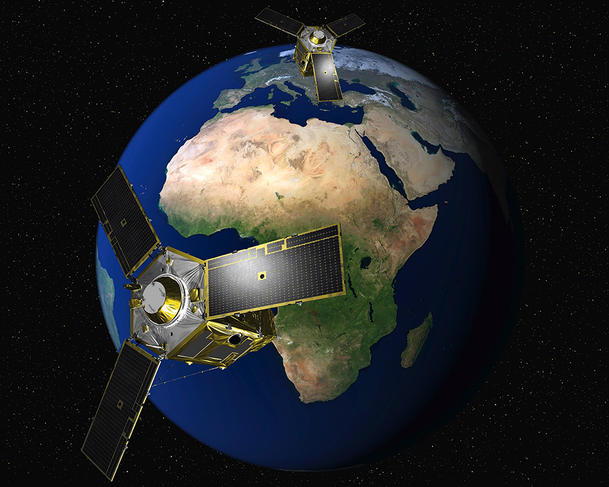 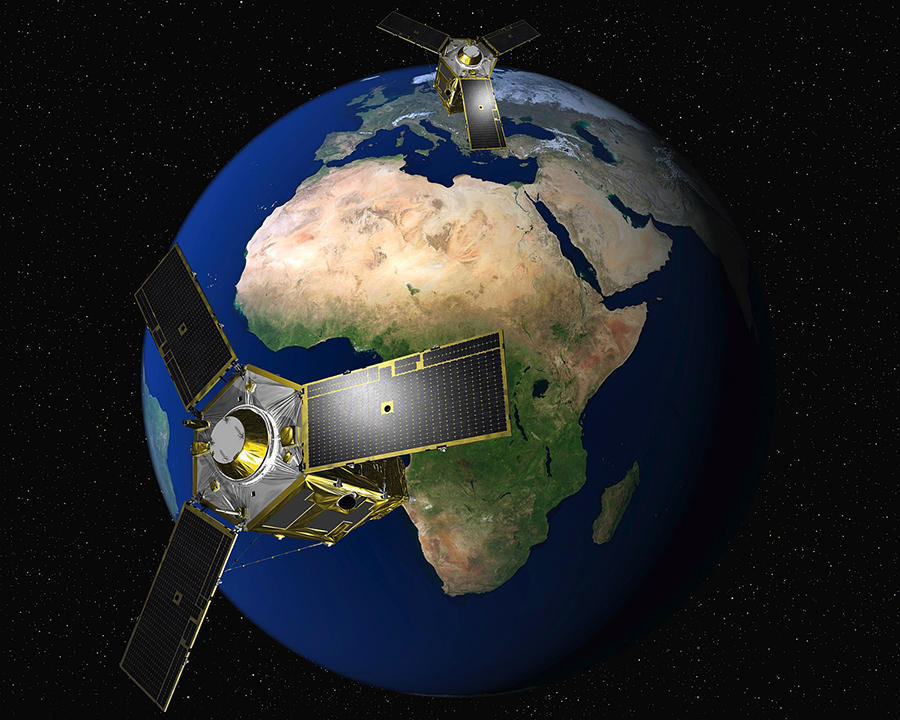 If access to data is no longer a problem, the SERTIT’s real challenge lies is in image processing: decoding the torrents of satellite information it receives, namely on the light reflected by individual objects, into readable form. “Our data processing is based on both specialized software and algorithms that we develop specifically to improve quality and speed,” says Caspard. In other words, a blend of technical sophistication and human expertise, with the aim of producing useful information.

More specifically, when raw images from a disaster arrive, they first need to be corrected, to counter atmospheric effects or sensor defects, for example. Next, depending on the user’s requirements, certain information may need to be extracted. While a basic map product indicates the catastrophe’s location, size and state, a more complex product can “assess the impact on urban infrastructures, communication, farmland and the environment,” explains Battiston—bearing in mind that damage is not always easy to ascertain in disaster situations. “On Saint-Martin, we had to program satellites to take images five times after Irma passed to see through thick cloud cover,” Caspard recalls.

Yet over and above its map-processing skills, the SERTIT also plays a key role in managing rapid-mapping requests. Battiston defines the service “as a point of contact for all stakeholders” in the map-production chain: “It defines the needs of end-users, asks image suppliers to program satellites, organizes production and validates products, before finally delivering them to users.”

A difficult task, intensified by tight deadlines—because after all, an image’s value depends on how current it is. “Rescue services need to act immediately, size their teams, target priority zones, read the accessibility of impacted zones,” says Battiston. For this reason, the SERTIT is able to provide an ISO 9001-certified service just hours after it receives satellite images, with timeframes that depend on the request’s complexity. An on-call roster for the SERTIT’s 15 or so rapid-mapping staff ensures that services are available round the clock.

If the SERTIT is a trusted partner of both governmental and non-governmental agencies today, it is thanks to its decades of experience. This year, as the rapid-mapping pioneer celebrates its 30th anniversary, its founder and scientific director Paul de Fraipont recalls “a big technological leap forward” since its early days when “work was done with piles of punched cards that were run through a large CNRS calculator in the Strasbourg suburbs. PCs with color displays didn’t exist yet…” The rise of Internet has also critically sped up communication between all the parties involved, while the presence and performance of satellites and observation tools have increased. 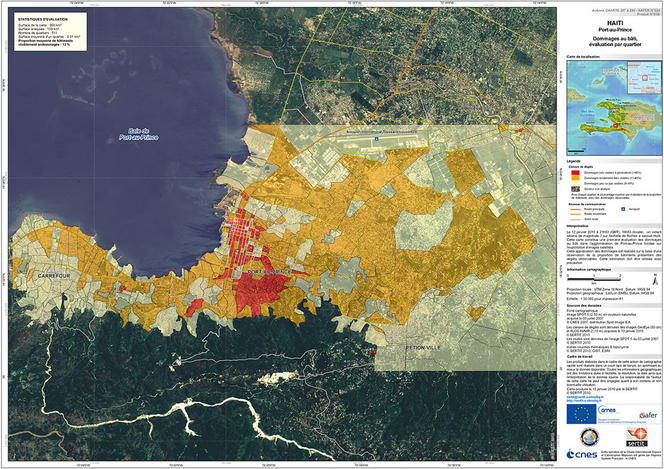 Earthquake in Haiti. Researchers were able to assess the damage made to each neighborhood. This map was provided the day after the earthquake to help organize and guide relief efforts. 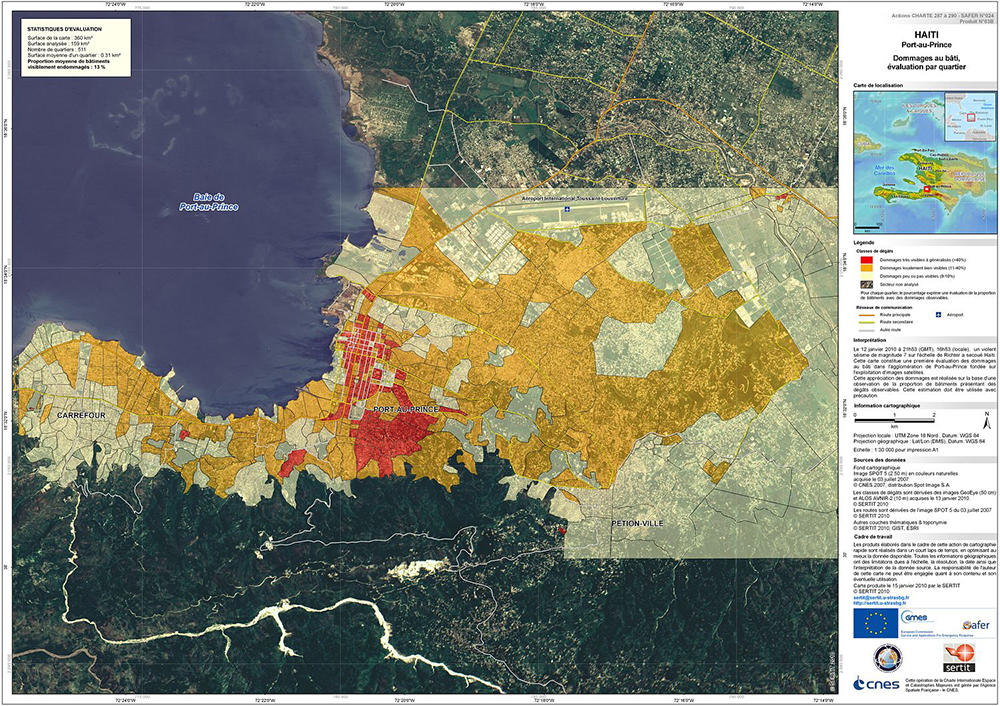 These technological changes are matched by the SERTIT’s structural evolution. In 2015, it joined the ICube Laboratory:3 a research institute with over 650 members organized into 16 different research teams and 6 technology platforms, that combines engineering and computer-science knowhow primarily to enhance imaging applications. This collaboration helps boost the laboratory’s research activity, as attests Michel de Mathelin, director of the ICube, and also of the SERTIT since its integration: “SERTIT engineers participate in ICube projects and constantly alert the laboratory on application issues that may need research solutions.”

Crisis mapping from remotely-sensed data is in fact a relatively recent field of expertise.

But its role as an ICube Laboratory platform also helps the SERTIT adapt to ongoing evolutions in the sector. “Remote sensing, like other fields, has entered the era of Big Data,” De Mathelin adds. He largely attributes the current surge in satellite images available for processing to “the launch of new satellite constellations and the emergence of industrial players in remote sensing and geographic data-production.” The challenge now is to have the means to keep this surge of data under control.

One strategy currently being jointly explored by the SERTIT-ICube is process automation. “We’re trying to develop algorithms and tools that can automatically extract useful information from the huge masses of data—all with the aim of improving the quality and speed of the information we deliver,” says De Fraipont.

"We need to land a jumbo jet"

But improvements can also come from unusual requests. During Haiti’s 2010 magnitude 7.0 earthquake, for example, as Port-au-Prince airport was blocked, emergency services asked that the SERTIT locate, via its images, an alternative airport to land a French jumbo jet carrying much-needed freight. “We found an airport in Jacmel—but analysis of the images showed people sheltering on the airport tarmac...” An evacuation operation then had to be organized—but that wasn’t all. “Once the plane landed, we were asked to identify a viable road to take the supplies to Port-au-Prince by truck.” There were also requests to locate water sources so that newly delivered water-purifying equipment could be put in use, and finding refugee camps so that the needy could be supplied. “Every request led to a new process that we had to define—and this is the type of virtuous circle we want to encourage,” concludes the SERTIT’s founder.

0
Versailles, from one Century to the Next Previous
Why Baudelaire Continues to FascinateNext