Home / Articles / Is ventilation the ultimate weapon against Covid-19?

Is ventilation the ultimate weapon against Covid-19?

Home / Articles / Is ventilation the ultimate weapon against Covid-19?

Is ventilation the ultimate weapon against Covid-19?

Students wearing protective masks during an exam with the classroom windows wide open (Groß-Gerau, Germany, 21 April, 2020).
Sebastian Gollnow / DPA / dpa Picture-Alliance via AFP
Share
Share
A group of researchers is set to promote the use of CO2 detectors in classrooms, cafeterias, offices, factories and other enclosed spaces. Their goal is to improve indoor ventilation to help curb the spread of coronavirus.

In June 2020, Benoît Semin, a young physicist at the PMMH1 began wondering whether the premises he worked in were sufficiently ventilated. He suspected that one of the sources of coronavirus infection was aerosols, fine particles emitted by our respiratory tracts, which remain airborne for a long time.

As a specialist in fluid dynamics, he was convinced that proper air circulation was one of the keys to limiting the spread of Covid-19. With the help of his laboratory’s engineers, he deployed a small infrared sensor to measure the level of carbon dioxide (CO2) in the ambient air, since the gas is an excellent indicator of ventilation quality. The principle is simple: in an enclosed location, human breath increases the concentration of CO2. The less well aired the space, the higher this concentration rises above the threshold of 400 parts per million (ppm), i.e. the level of CO2 present in the atmosphere.

Semin’s measurements turned out to be quite reassuring: his laboratory was well aired. However, he felt that the question was important enough for him to share this initiative with his colleagues. In September he organised a seminar on a videoconferencing platform to discuss ventilation in public spaces. The topic aroused the interest of numerous researchers, including François Pétrélis at the LPENS,2 who decided to install a CO2 detector in his classroom. His students immediately took notice of the device, which signalled when the CO2 concentration exceeded 800 ppm. “This is the threshold usually recommended by the French authorities,” Semin notes. During these initial trials, Pétrélis reports, “The students themselves were the first to open the windows when the sensor indicated that it was needed. Before that, they would more often complain of being cold.” The instrument spontaneously initiated a particularly effective “anti-Covid-19” measure.

An example of a CO2 measurement by the PMMH laboratory’s detector in one of its rooms with the windows tilted open. The graph on the right shows a level far below the recommended maximum values.

An example of a CO2 measurement by the PMMH laboratory’s detector in one of its rooms with the windows tilted open. The graph on the right shows a level far below the recommended maximum values.
PMMH
PMMH
Share
Share

This observation has convinced the two researchers, along with a group of their colleagues (physicists, biologists, mathematicians, physicians and members of the government public health council), that any effort to promote good ventilation as an anti-Covid-19 strategy should also involve the generalised use of these detectors. This gave rise to “Projet CO2” the CO2 Project.

We all remember that at the beginning of the pandemic, the World Health Organization (WHO) strongly denied that aerosols were a source of SARS-CoV-2 infection. The idea that they could cause the virus to remain in the ambient air was considered disinformation. At the time, only droplets (larger particles that settle more quickly on surfaces) were deemed responsible for the transmission of the disease. This initial error is difficult to understand. As Semin points out, “Respiratory illnesses like tuberculosis, flu and SARS-CoV-1 have an aerosol component.” The consequences of this assumption proved disastrous, in particular by delaying the adoption of masks in Western countries.

Multiple proofs of the pathogen’s airborne transmission have since emerged. Research projects using rodents and ferrets have shown that the virus can spread between cages that are not necessarily next to one another. Similarly, analyses of infection clusters have proved that one can “catch” the disease without being in direct contact with an infected person. And if the virus can remain in the air, the two-meter social distancing rule is insufficient for poorly ventilated indoor spaces.

In an open letter dated July 2020, 239 scientists asked the WHO to address this risk. Many of them believed that aerosols were not just one danger among many, but the main vector of infection. Ultimately, the UN agency acknowledged the findings of their research. National health authorities soon followed suit and adapted their recommendations. As a result, air renewal, which helps disperse aerosols and reduce the viral load, became a major public health issue. In March 2021, the WHO itself published a roadmap containing advice on ventilation. A recent study published in The Lancet3 confirms, perhaps once and for all, that SARS-CoV-2 is transmitted by aerosols and not by droplets, endorsing the importance of mask-wearing as opposed to cleaning and disinfecting surfaces. However, much remains to be done if regular airing of enclosed spaces is to become a habit – which is precisely what Projet CO2 seeks to achieve.

“It is quite simple,” Pétrélis says. “The CO2 level corresponds to how many times the air in a room has already been breathed.” In an indoor space, the closer this level is to that of the atmosphere, the better the air circulation, and the lower the risk of infection by Covid-19. “The problem is that most people think that their living and workplaces are sufficiently aired even when that is not the case.” To be encouraged to simply open the windows, they need to be aware of the actual ventilation rate. As the researchers explain, CO2 levels should be measured regularly in offices, restaurants, factories, theatres and classrooms. This is not as difficult as it might sound: a CO2 detector is as easy to use as a thermometer and only fetches €100 to €200. “That’s how much it costs the government to do three PCR tests!” Pétrélis notes. In other words, the expense of purchasing the device is quickly recouped.

The national education administration could therefore install a few CO2 detectors in every school, as is already the case in Luxembourg. And yet why bother about ventilation now that things may soon return to normal? “The current epidemiological situation is still worrisome, and improved air renewal is one preventive measure that can be implemented in the short term,” Semin points out. “Over the longer term, it could also help reduce contaminations related to seasonal respiratory illnesses, and anticipate new aerosol-transmitted pandemics.” 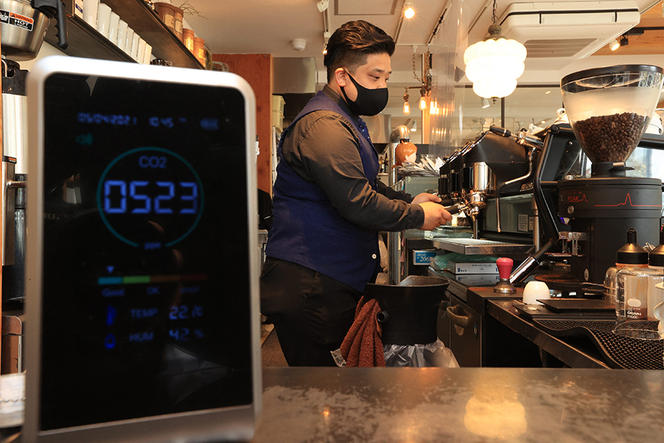 A CO2 detector installed in a café in Osaka, Japan (April 2021). The device is as easy to use as a thermometer. 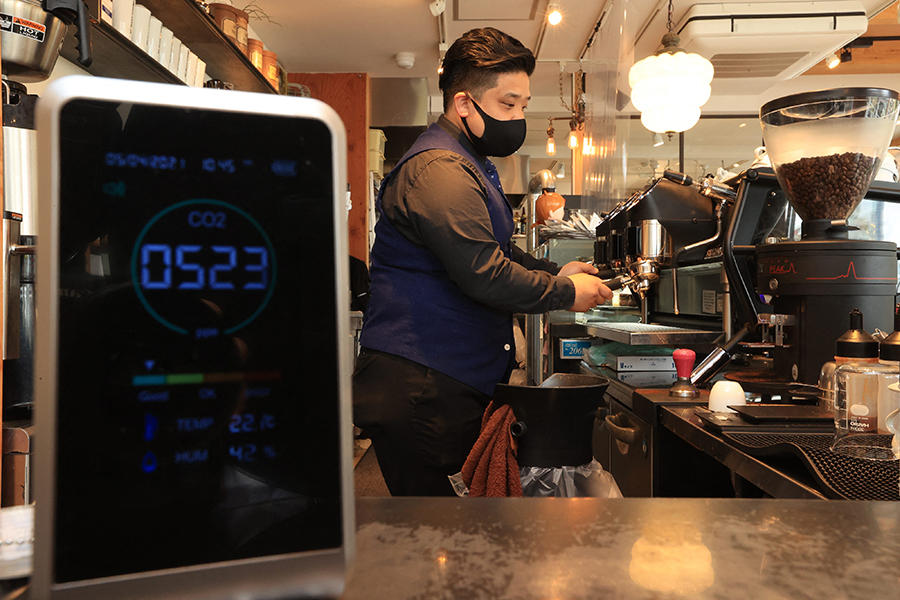 And that’s not all. In addition to its usefulness as a ventilation quality indicator, the level of CO2 is an important consideration in itself. Beyond 1,000 ppm, it affects the cognitive capacities and concentration of the people in the room and starts causing headaches. This can be a serious problem: according to a 2018 survey conducted by the French observatory for indoor air quality, the OQAI, CO2 levels in 36% of nursery and elementary schools reached 1,700 ppm in at least one classroom! Furthermore, proper ventilation of indoor spaces can reduce the amount of certain toxic molecules, including VOCs (volatile organic compounds) like benzene and toluene as well as biocontaminants like moulds or allergens from acarians. In fact, improving indoor air quality or fighting against Covid-19 is one and the same thing.

To promote these ideas, the researchers involved in Projet CO2 have created a website offering literature on the topic, as well as technical documentation and educational material such as resources for making a CO2 detector in class – an excellent way to raise pupils’ awareness of the importance of ventilation. The participants are also spreading the word through the media or initiatives like La Main à la Pâte, a foundation for science education. Meanwhile, Benoît Semin is preparing joint research projects with the Nantes University Hospital in western France and the Paris hospital network AP-HP, as he is convinced further scientific effort is needed: “We don’t yet have answers to even very basic questions, such as how the probability of infection varies as a function of the CO2 level. We still have a lot of research ahead of us.”

Article
Biomechanics off to a flying start in BMX racing
Physics